A groundbreaking study of foreign-born sisters in the United States has been expanded into a book.

While the study released in March 2017 was able to convey many of the numbers the researchers found, the book is able to tell some of their stories, said Sr. Mary Johnson, a Sister of Notre Dame de Namur, a distinguished professor of sociology and religious studies at Trinity Washington University, and one of the book's four authors.

"The book contains the many voices of international sisters and their experiences here in this country," Johnson said. "They are hidden in plain sight, and we have been able to give them a forum through which they can be heard and seen in a collective way."

The study found sisters in the United States from 83 countries on six continents, with 33 percent from Asia and 28 percent from Europe. Nearly 4 in every 10 sisters from Asia were from Vietnam, while 41 percent of those from Europe were from Ireland.

Those from Europe tend to be elderly, the researchers said — sisters who came to the United States in the 1940s and 1950s — while sisters from Asia and Africa tend to be younger and more recently arrived. The average age of the sisters in the survey was 58, while the average age of U.S.-born sisters is nearly 80.

Co-author Mary L. Gautier, a senior research associate at CARA, said once the surveys were done, researchers did interviews and focus groups with international sisters. Those stories weren't told in the study, she said, but are key to the book and give the numbers context and humanity.

"What we wanted to do was tell the whole story," she said. "It's a very rich, very complex picture."

Gautier said the flow of sisters into the United States in the 1800s was largely divided by nationality or ethnicity, so there were large groups of, say, Irish sisters coming to minister to Irish immigrants. While that has happened in recent decades, particularly with Vietnamese sisters ministering in Vietnamese communities, for the most part, the international sisters now are more diverse and serving more diverse populations.

"[Foreign-born sisters] are much more culturally diverse today, and they're unlike the sisters that came a century ago, who were coming to serve the poor in the United States because the poor at that point were largely Catholic immigrants," Gautier said. "Now, they're here to serve the church in all its needs."

Co-author Sr. Patricia Wittberg, a Sister of Charity of Cincinnati and a research associate at CARA, said international sisters have made religious communities in the United States more diverse.

"It does open U.S. religious to a deeper understanding of other cultures, which is excellent. ... But it's hard to have more than one culture [in a congregation], more than one set of expectations of what community life involves," Wittberg said. "I think now in comparison, we're more aware of the cultural implications, but being aware intellectually isn't the same as gut awareness."

Some foreign-born sisters are acutely aware of cultural differences, Wittberg said, including those who came to the United States as children then chose religious life as adults. They may be, say, Vietnamese by birth but often don't feel they quite fit into either world. Some may find the community they long for in religious life; others may find more isolation.

While there are challenges, Wittberg said many of those interviewed spoke about being a living example while society wrestles with the questions of migration.

"People said we are a witness in this time of paranoia of 'others' coming in over the borders," Wittberg said.

Co-author Sr. Thu T. Do said many of the stories in the book were especially meaningful to her because she is an international sister herself. Do's congregation, Lovers of the Holy Cross, sent her to the United States from Vietnam to work on a doctorate in higher education, during which time she lived with U.S. congregations. Do is now a research associate at CARA.

"Being able to be involved in the study has been an eye-opening experience for me," she said. "Of course, there are significant differences between myself and many others, too."

Do currently lives with the Sisters of the Visitation of Holy Mary in Washington, D.C. Others have different housing arrangements, she said, and some even come in a group and live in a homogenous community.

Johnson said orders that have large percentages of foreign-born sisters bear watching in the coming years, as they tend to minister and attract vocations in communities with similar demographics, and many are seeing a lot of growth. One sister told researchers of hosting a "come and see" event for young Latinas that drew 25 attendees, a large number for a vocation event.

"This isn't a new phenomenon. For over a century, the United States has been a recipient of the gifts and talents of international sisters," Johnson said.

Researchers are already looking at what's next: A new study is being conducted on U.S.-based congregations that now have foreign-born sisters in leadership, Wittberg said. That study, funded by the Conrad N. Hilton Foundation, which also funds Global Sisters Report, should be complete in about a year. 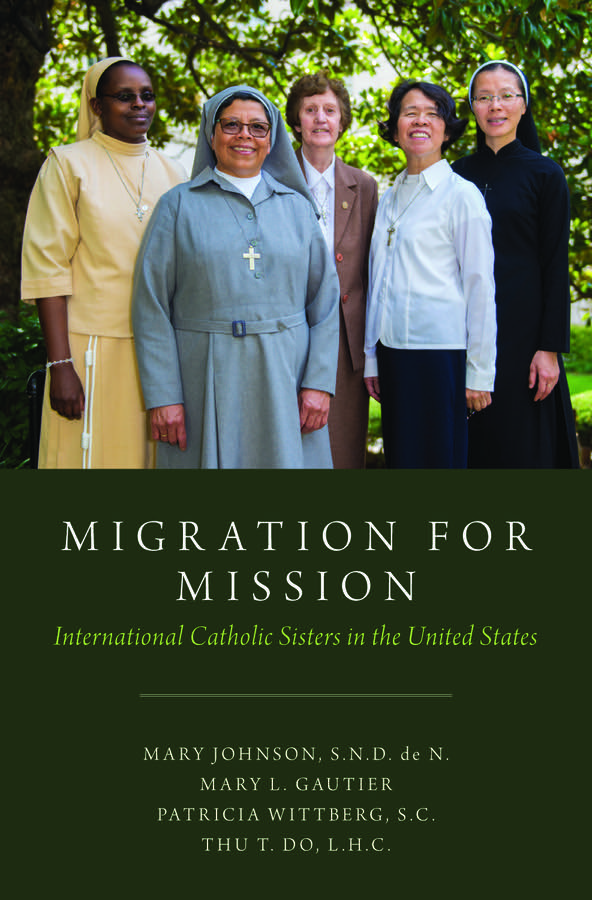