Skip to main content
This story appears in the NCSW 2019 feature series. View the full series.

Grateful. Inspired. Joyful. Impressed. Humbled. Energized. Those were some of the one-word reactions among the more than two dozen people who gathered at a coffeehouse March 12 in Washington, D.C., at a Nuns and Nones event sponsored as part of National Catholic Sisters Week.

"I'm one of the 'nones,' part of a growing demographic of religiously unaffiliated millennials," filmmaker Rebecca Parrish said in her director's statement on the film's website. "So I could never have predicted that I'd be making a film about ... nuns."

That made the film a fitting centerpiece for attendees of the Washington Nuns and Nones event, which included seven sisters from congregations in the area. Other screenings at Nuns and Nones gatherings were planned around the country for National Catholic Sisters Week, including in Minneapolis; Grand Rapids, Michigan; Chicago; and Boston.

"We wanted to bring, as Nuns and Nones does, sisters and millennials together to talk about the things that matter in our lives, and this film has been such a wonderful way to understand what the bridge between these two communities really looks like," said Brittany Koteles, one of the organizers of the D.C. event.

Kelsey Herbert, who was part of the Nuns and Nones community in Grand Rapids but moved to D.C. in August, said that despite its draw among millennials, the organization "is really open for all people who are asking the questions of life and want to explore it together and finding value in generational relationships and committed to those relationships."

After the screening, participants broke into small groups to share their reactions. Rosita Choy, who described herself as a "none" and a "faith-based hanger-on-er," said she was particularly impressed by the film's depiction of the sisters' dedication to social justice issues. She has witnessed that dedication herself, she said, in her former work for the American Friends Service Committee on border and immigration issues, where she often encountered Catholic sisters.

Sr. Quincy Howard, a Sinsinawa Dominican sister who now works at Network, said she was humbled and inspired to see how Campbell and her colleagues at Network launched the initial Nuns on the Bus campaign in 2012.

She was still in formation to become a sister when the Vatican investigations were underway. She was struck, she said, by the film's portrayal of the "paradox of disagreeing with the church yet being so closely identified with it. That is very real and it remains."

While there has been a lot of healing with sisters, she added, for her and for many other women religious, "there is still some underlying tension regarding church doctrine."

At the end of the gathering, participants shared a word, sometimes a few sentences, on what they got from the film, the small group discussion and the sisters. Several young Catholics shared how the example of the sisters keep them grounded in the faith by exemplifying the church's social justice advocacy, particularly during a time of turmoil and disappointment with church hierarchy over the sex abuse crisis.

"Contemplating what it means to be Catholic in this moment, in this year, is a hard question," attendee Melissa Cedillo said. "When we are healing and looking for hope on what it means to be Catholic from here on out, I really think it's going to be through the leadership of Catholic sisters that we're going to get not only out of this mess but fix and set up infrastructure to prevent it."

Several participants commented about inspiration drawn from the sisters' work on social justice issues and Schenk's exploration of the role of women in the early church.

"I feel very humbled and somewhat uncomfortable with everyone saying how great nuns are," Sr. Marie Lucey said, sparking laughter among the group.

A Sister of St. Francis of Philadelphia and associate director of the Franciscan Action Network, Lucey worked at LCWR during the doctrinal assessment and said that while she appreciated the film's depiction of the Vatican's scrutiny of sisters, she noticed the organization received scant specific mention during the film. The sisters in leadership, she said, developed a contemplative process that was crucial to getting through such a painful time.

The film's depiction of the sisters' reliance on contemplation and the importance of community particularly during times of stress and grief struck several participants as key takeaways.

The development of community and shared connection is an underlying theme in the Nuns and Nones movement as it evolves, said Koteles, who began working on the national level for the group a year ago.

Now she, Herbert and others are exploring how to keep local Nuns and Nones groups going in cities where they've already formed; begin new ones in areas such as Washington, D.C.; and keep connected on a national level. Several event participants signed up to receive information about other Nuns and Nones gatherings.

Choy, who is now a consultant and coach for nonprofits, was one of the sign-ups. She learned about the event from an email from the Potter's House, the coffee shop that hosted the event, and had never heard of Nuns and Nones.

"It makes sense for the times," she said afterward. "There's a whole generation of people working in social justice, even people like me who are not millennials, who are trying to find spiritual renewal in this time of polarization and battles."

*Photo caption information has been updated to correct the names of the sisters. 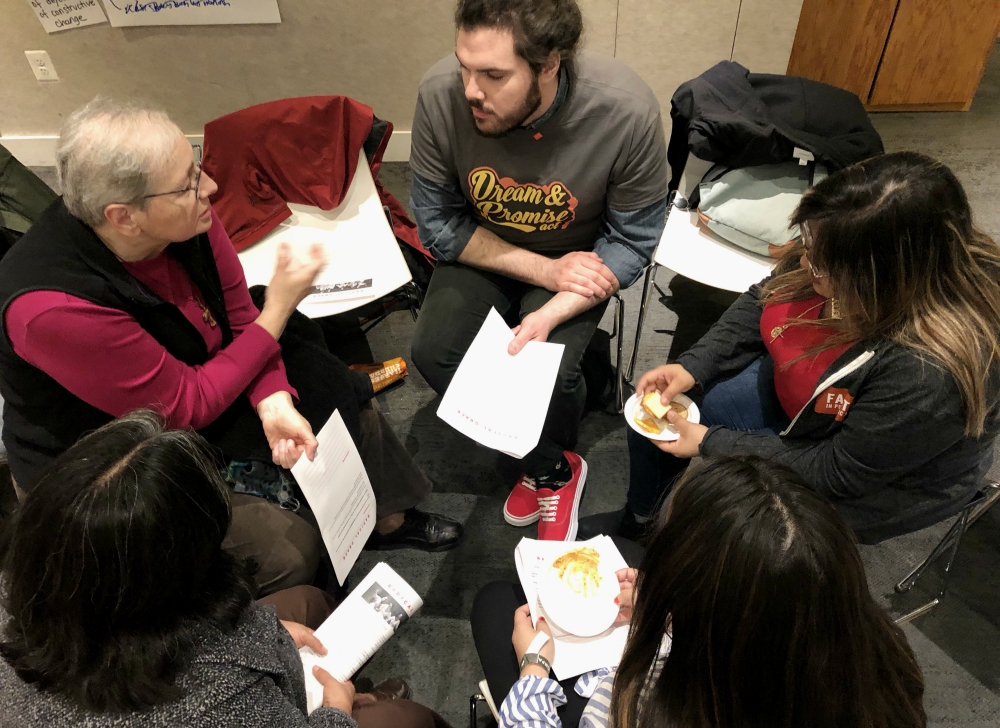 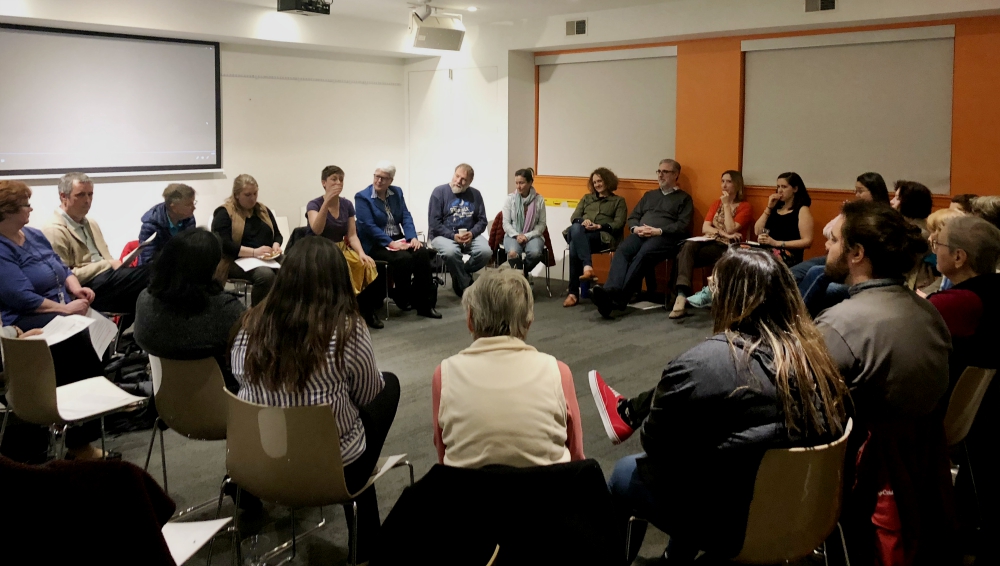 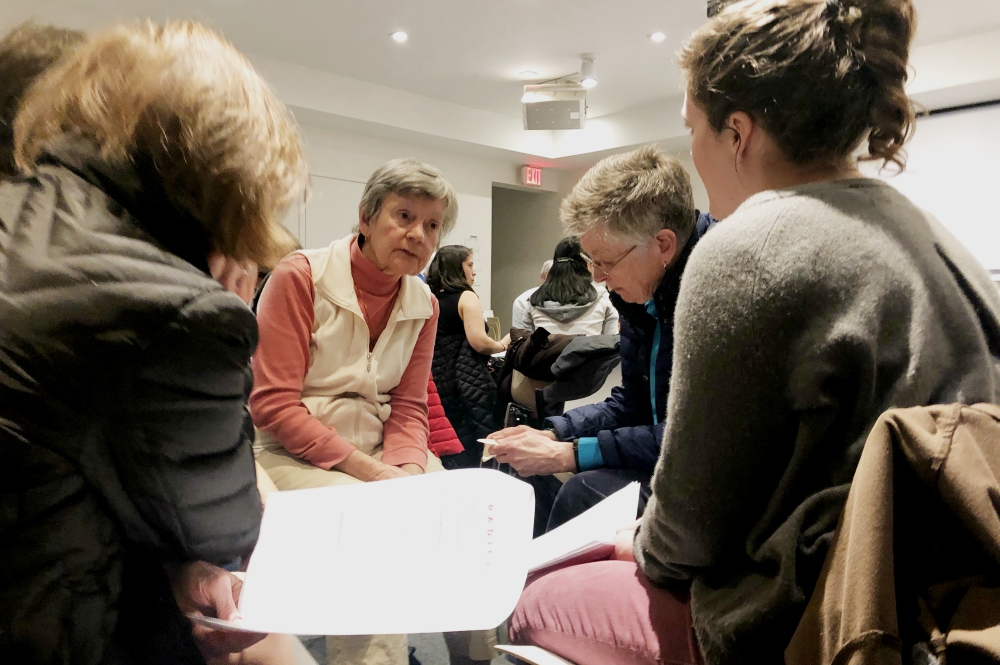