They live on islands and in forests, behind churches on busy highways and among working-class homes on urban streets. Obedient to a discipline of prayer almost as old as Christianity itself, contemplative nuns in the United States may seldom visit the world that bustles outside their doors — but are often called first for prayer when there is a personal or global tragedy.

“They are not asked about much, they are not out and about, they weren’t being investigated,” said Sr. Janet Welsh, a Sinsinawa Dominican and director of the McGreal Center at Dominican University in Lake Forest, Illinois. “But they are a powerhouse of prayer and contemplation and very much in tune with the needs of the world.”

Traditionally, women who have chosen a life of contemplation have embraced intentional silence, a pursuit of holiness and austerity often mysterious to the outside world.

“That differs from an active community whose ministry is teaching, or hospital or social work [for example],” explained La Salle University religion professor Margaret McGuiness, author of Called to Serve: A History of Nuns in America. “Not that women in active orders don’t pray — of course they do — but the ministry of contemplative women is to pray for the life and people of the world. “

Who are contemplatives in the United States? The answers are as diverse the communities they inhabit, women seeking an ordered round of domestic routine and worship that many say provides the space they need to more deeply meet the world’s profound needs through prayer.

It’s not even clear how many such U.S. communities exist. Researcher Mary Gautier of the Center for Applied Research on the Apostolate at Georgetown University (CARA) said there are fewer than 150 contemplative female congregations in the United States, whose members account for a “miniscule” percentage of those engaged in religious life.

Nor is membership stable or static. Nuns may begin in active orders, which are also described as apostolic orders, before they move to a contemplative one (or vice versa); they may leave one community to try living out the rule of their founder in different circumstances, or may create a mission that is both active and contemplative.

“It’s very complicated, and I think that’s part of the reason it seems to be shrouded in mystery,” said Gautier, CARA senior research associate. “It’s [also] very difficult to distinguish between contemplative and active congregations” with some groups describing themselves as “active/contemplative” or “evangelical apostolic.”

To those who wonder about the purpose of life set apart in an age when the need for active ministry seems so great, consider the answer of Sr. Leslie Lund, a Carmelite Sister of Mary, retreat leader and spiritual director who lives with another nun as a hermit in rural Washington State:

“Our main work is prayer for the church and for the world. That’s how we help with the transformation of the world. We really believe that we have access to the needs of the world, not through one particular ministry, but through our prayers.”

An American stamp on European tradition

Contemplative communities can be traced back to as early as the fourth century, McGuiness said, when small female groups followed their male counterparts into the desert seeking prayerful solitude.

By the ninth century, contemplative communities had a distinctive structure, she added, including the clothing or habit, a first-in-command (usually an abbess or a superior), and a communal way of life (which traditionally includes time for household tasks, private prayer and study, and group devotions). “At the time, not only were women contemplatives but they were also cloistered, and so they are living a life of very strict enclosure,” McGuiness said.

It was not until the 16th century, she noted, with the founding of the Ursulines by Angela Merici to educate young women, that women would seek to work outside monastery walls.

She noted that the first women religious arriving in the newly birthed United States were contemplative Carmelites who traveled from Holland in 1790 to found a monastery in Fort Tobacco, Maryland, but bishops of that era were more interested in recruiting women to open orphanages, hospitals and teachers.

Nineteenth-century women in enclosed communities weren’t necessarily encouraged to found communities here, McGuiness said. Some did, though they never equaled the number of women in active orders.

But even the act of setting up camp in a new country forced the most traditional of orders to adapt, giving old world religious communities a uniquely American stamp. The nuns who had arrived in Port Tobacco in the first flush of American freedom struggled with agricultural failures and increasingly decrepit buildings, according to their website, before moving to Baltimore and starting a school in the early 19th century. (A Carmel, as the communities are known, has since been reestablished in the original location.)

Though there are canonical (church law) distinctions between contemplative and active communities and “the Vatican insists that you define yourself one way or another,” newly founded communities tend to blur those distinctions around the edges, said Sr. Patricia Wittberg, a Sister of Charity of Cincinnati, who has written widely on Catholic religious orders. (She also is co-author of New Generations of Catholic Sisters with Gautier and Sr. Mary Johnson, a Sister of Notre Dame de Namur and professor of sociology and religious studies.)

In a society where overt measures of productivity abound and increase, McGuiness said, contemplatives perceive themselves as engaged in a ministry as busy as any job in the secular arena. “It’s a full life they have created for themselves. There’s time to eat and socialize, but not a whole lot of time.”

In a time in which many apostolic sisters have moved away from wearing the garments that have characterized nuns since the medieval era, contemplative communities often still wear them, a visual sign of their consecration, history and separation from secular society. Indicating her traditional habit as she sat behind the grille, Sr. Mary Gabriel of the Cloistered Dominican Nuns of the Perpetual Rosary in Lancaster, Pennsylvania, pointed out wryly: “There isn’t a store that makes these. You don’t get them at Walmart.”

The routines that order daily life vary rather widely, from an almost constant round of solitary pursuits with little public contact, to daily contact with area residents and visitors. Still, many contemporary contemplatives have felt both a call and a need to reach outsiders.

In communities that once would have remained silent behind monastery walls, some nuns are now allowing a measure of access, at least online, and a glimpse of daily life and routines. In late middle-age or beyond, nuns have become canny social media mavens, posting updates to Facebook and staying in touch with long-time supporters and the curious via email and blogs.

Though the purpose of such contact is to promote a sacred vision of community, the move towards increased transparency may also reflect sensitivity to contemporary culture, with its emphasis on public disclosure. It’s also a way, sometimes the only way, to reach those who may be considering a possible call to contemplative life.

Even in many cloistered communities, nuns are well-versed in new technologies. Some, like Sr. Emmanuela of the Caterina Benincasa Dominican Monastery in New Castle, Delaware, have become skilled at maintaining websites, offering visitors a chance to understand more about the history of a particular community or to purchase a woodcut or jar of jam online.

At the Benedictine monastery of Our Lady of the Rock, situated in rural solitude among Washington State’s San Juan Islands, Mother Hildegard communicates with online readers, musing on such topics as the history of saint’s days, artistic visitors, and the wonders of spring in Washington.

The Poor Clare Colettine nuns whose histories were collected by Abbie Reese in the film “Dedicated to God: An Oral History of Cloistered Nuns” practice an austere and self-abnegating discipline that might have seemed familiar to a 19th-century nun, but even they have informational material posted online.

And the sisters of Visitation Monastery of Minneapolis (whose Flickr account is titled “Nunz in the Hood”) have become a beacon of hospitality in a neighborhood that has fallen on hard times, where the doors of once-stately homes mask chronic violence and blight. In addition to inviting neighbors in to mark the liturgical hours with them, the Visitation Sisters are also available to connect residents in crisis with community resources and committed to a ministry of urban spiritual formation.

Change continues to affect enclosed communities, as nuns depart one community to form another, or are brought together by a shared vision and start their own foundations. Such is the case with the three sisters of the Benincasa Dominican monastery, situated in a repurposed convent in the shadows of the Delaware Memorial Bridge on a campus with a school and a Catholic parish in New Castle.

After living in a monastery of “holy women and good people” for approximately 40 years, Sr. Emmanuela said, “I felt that I was moving in a direction that the community could not move. It created a need for me to find another form of Dominican monastic life.”

A thirst for contemplation in the modern world

The future of American contemplative communities is uncertain. Some, like the cloistered Clare Colettines in Rockford, Illinois, continue to attract women interested in testing a call to immersive religious experience.

But as McGuiness observes (and much public survey data from organizations like the Pew Research Center corroborates), younger women (along with their male peers) are often more alienated from religious institutions than previous generational cohorts. “We need to look at that before we look at what’s happening to religious life,” she said.

On the other hand Welsh, at the McGreal Center at Dominican University in Illinois, finds hope in a revival of religious observance among some young adults.

“There seems to be a thirst for the contemplative in the modern world,” she said, citing a revival of lay interest in venerable devotional practices, like saying the rosary and spending time prayerfully contemplating the Blessed Sacrament. “Some would say that Vatican II threw the baby out with the bathwater and now young people are looking for devotional experiences.”

Conversations with contemplative women offer a lens into lives that seem in many ways very much akin to those who live outside cloister walls. They laugh, they have opinions, they struggle to live in community together, they have friends, and they are well-versed in what's going on in the world.

But they are also people who have made a choice that, inevitably, creates a stark, countercultural contrast with their compatriots, however devout, to purposefully cultivate a mostly interior life.

For that reason alone, they will probably continue to fascinate and perplex the vast majority of believers who wonder what call can be compelling enough to elicit such devotion, in a society that increasingly seems to find it not only baffling, but exotic.

This is the introductory piece of a six-part series called Contemplative Communities.
Click here to see profiles of individual communities published so far. 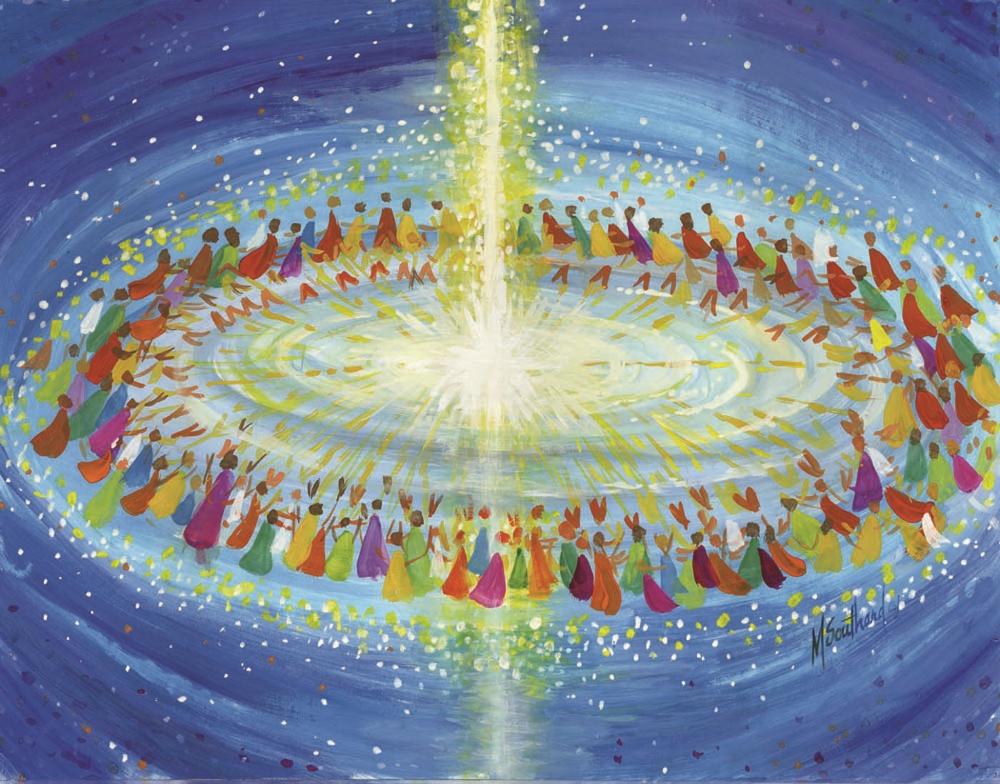 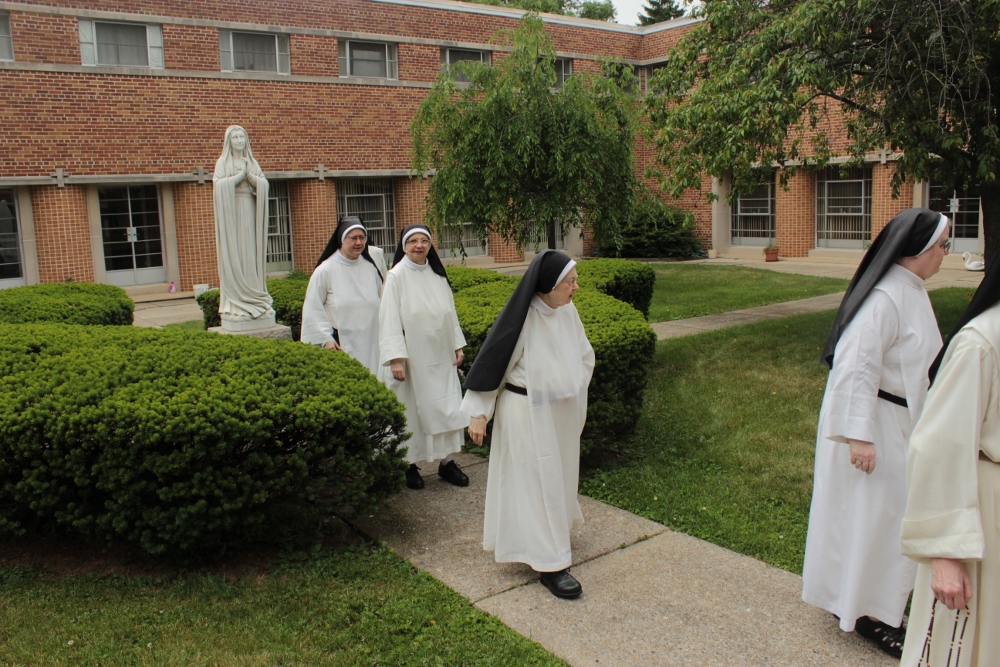 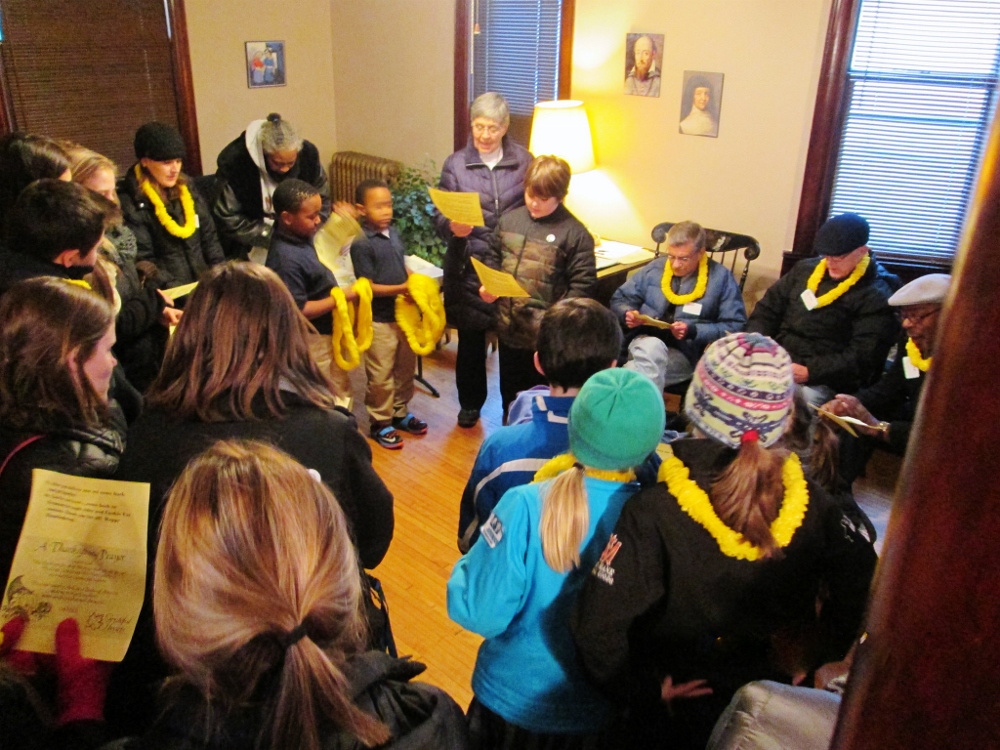 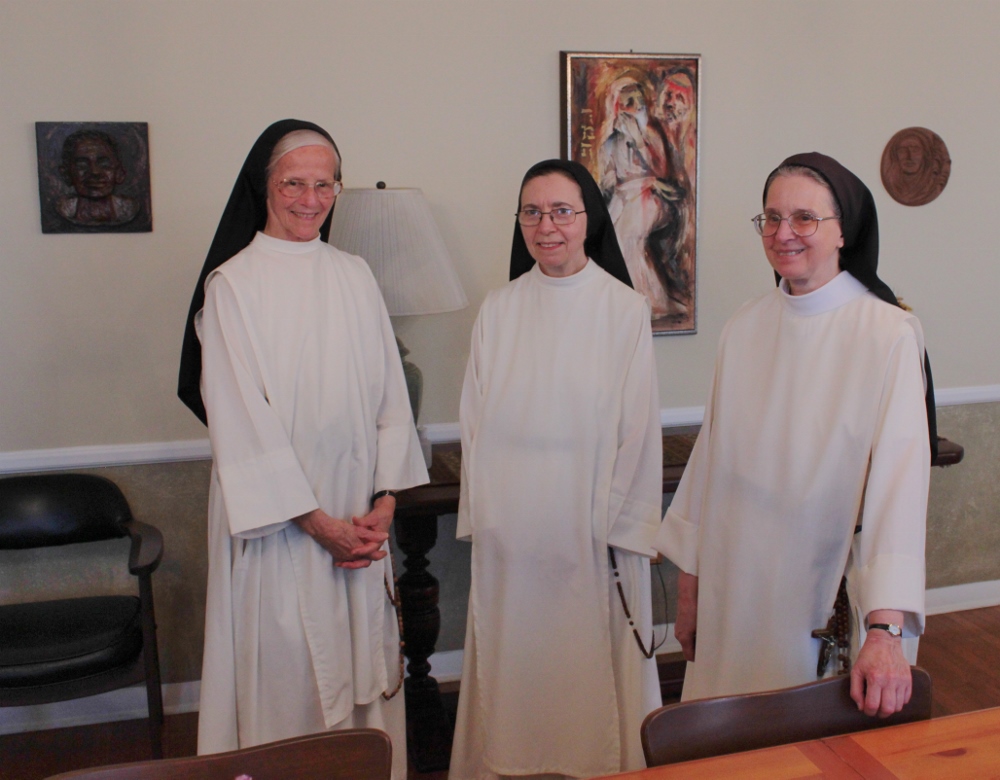 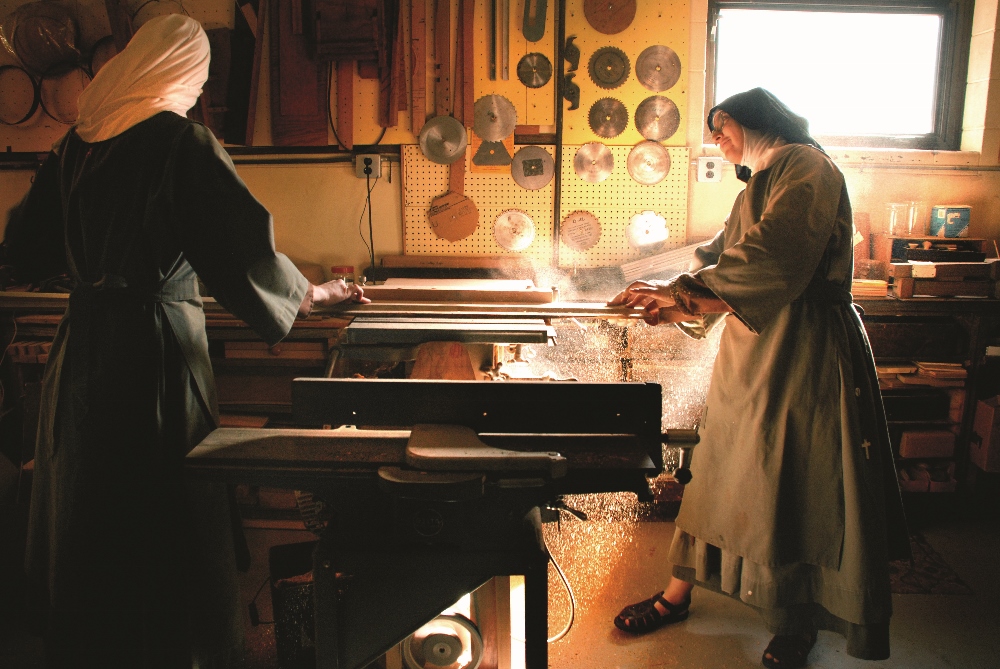 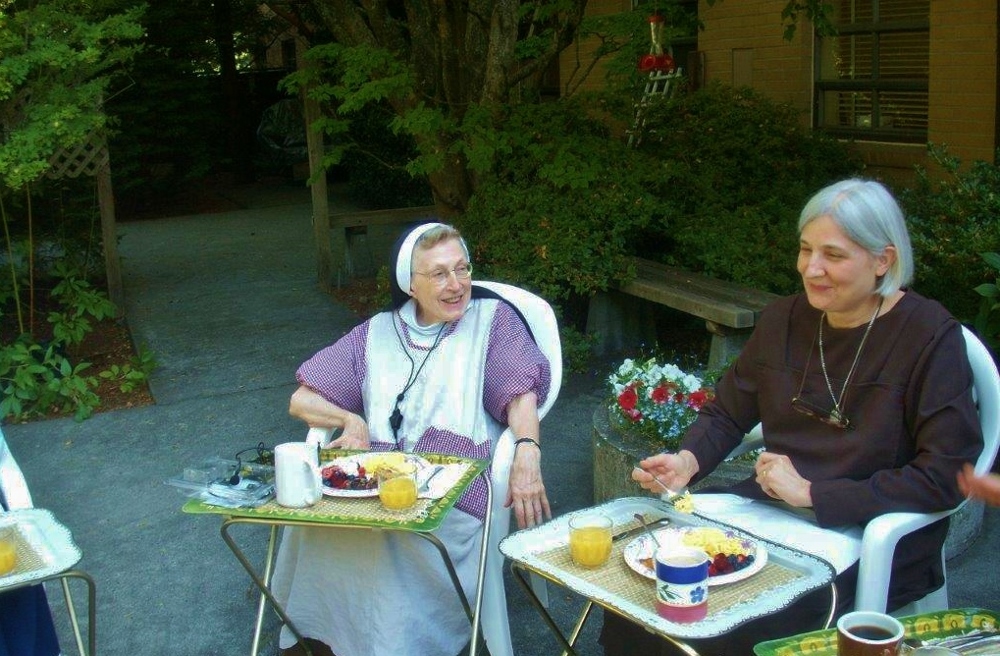