• Click here to see Sr. Mary Boatemaa and the juice and water bottling project in action. 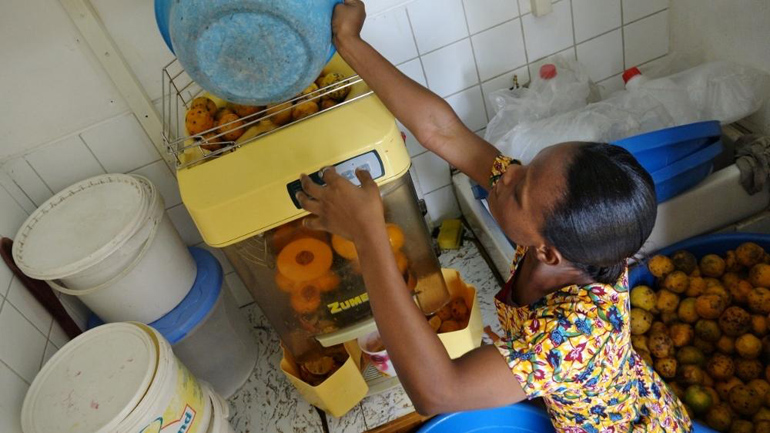 Sr. Mary Boatemaa loads the orange juicer with oranges. Because they have only one machine, the St. Louis Sisters sometimes have to stay up all night to finish processing orders. (GSR photo / Dana Wachter)

Kumasi, Ghana — The Jubilee Primary and Junior High School in Kumasi found themselves faced with an increasingly common problem: Their students were getting fat from guzzling sugary sodas. The St. Louis Sisters who run the school wanted to find a healthier alternative, so they decided to start selling bottles of orange juice, made from orange trees on their property.

The kids snapped it up. But the sisters were surprised when parents and people living around the school, located on a main road four hours north of the capital of Accra, started showing up on the school grounds, asking to buy the juice as well. Most bottled juices in the area sold commercially have very little fruit content and a lot of sugar added. "Natural juice?" The sisters had tapped into a new market.

"We sell out of this every day!" said Dorothy, an employee who works at the school canteen, as she balanced the empty cooler on her head and returned to the refrigerator in the convent to refill for the next day's recess. Children skipped back to class, sipping on the last bottles of the orange juice.

Two years ago, the St. Louis Sisters decided to apply for a small business license so they could sell the juice commercially, outside of school grounds, as an income-generating project for their community.

Sr. Mary Boatemaa, 25, who made her first profession as a sister last year, oversees the nascent "Louisville Sweet Juices" bottling factory. She said serving as factory director was not the work she expected to do when she decided to become a sister.

"After our first vow, we have two years to work and see what the communities need," she said. "As I came to this community, there was a need for somebody to run the factory." 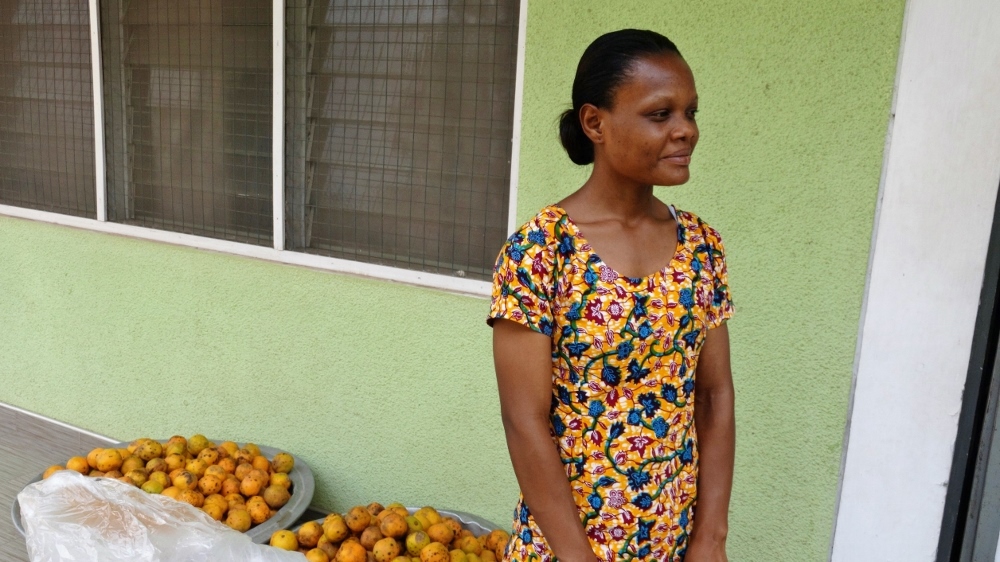 St. Louis Sr. Mary Boatemaa, 25, made her first profession as a sister last year and oversees the nascent "Louisville Sweet Juices" bottling factory. She said serving as factory director was not the work she expected to do when she decided to become a sister. (GSR photo / Dana Wachter)

"It's a big role and responsibility," she added. "For me, if as a beginner I'm able to manage and do well here, it will help me in the future to be able to manage even bigger [projects] than this."

There's also the knowledge that the income generated from the sales supports their outreach programs with women and poor people.

Boatemaa said she originally wanted to be a midwife, but after spending the past year with the St. Louis sisters, who are all teachers, she decided to go into education as well and hopes to enter university after finishing her time as factory director.

"Sometimes others sell 'pure fruit juice' here, even though it isn't always pure, but ours is raw juice: pineapple/orange and sobolo [hibiscus flower tea]," said Boatemaa. "It's expensive to produce because we don't add any additives or any preservative."

They sell a bottle of orange/pineapple juice for 2.20 cedis (U.S. 57 cents) and a bottle of sobolo for 30 cents. The sisters can sell their water, in both bottle and bag packaging, commercially. They're still waiting for the final paperwork before they can begin commercial juice sales.

Currently, they sell approximately 250 bottles of orange juice and 300 bottles of sobolo per week. If they can purchase another machine, they hope to double the amounts.

"With the water, we're competing with other [water bottling factories], so the profit margin isn't too great, but we think the juice will be more profitable," said Boatemaa. In Accra, for example, the Blue Skies company sells a similar natural juice product for $1.50, so the profits could be substantial. 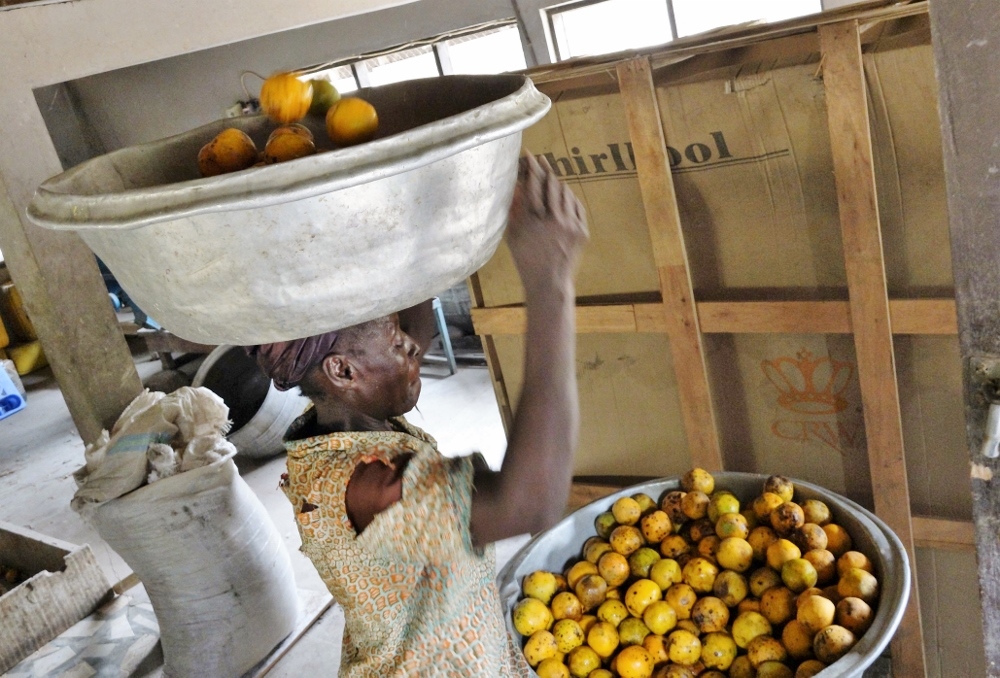 Previously, the St Louis Sisters used oranges from a citrus grove on their property, but a blight forced them to cut down their trees. They now purchase oranges at the market, which cuts into their profit, though they plan to plant more trees in the coming months. (GSR photo / Dana Wachter) 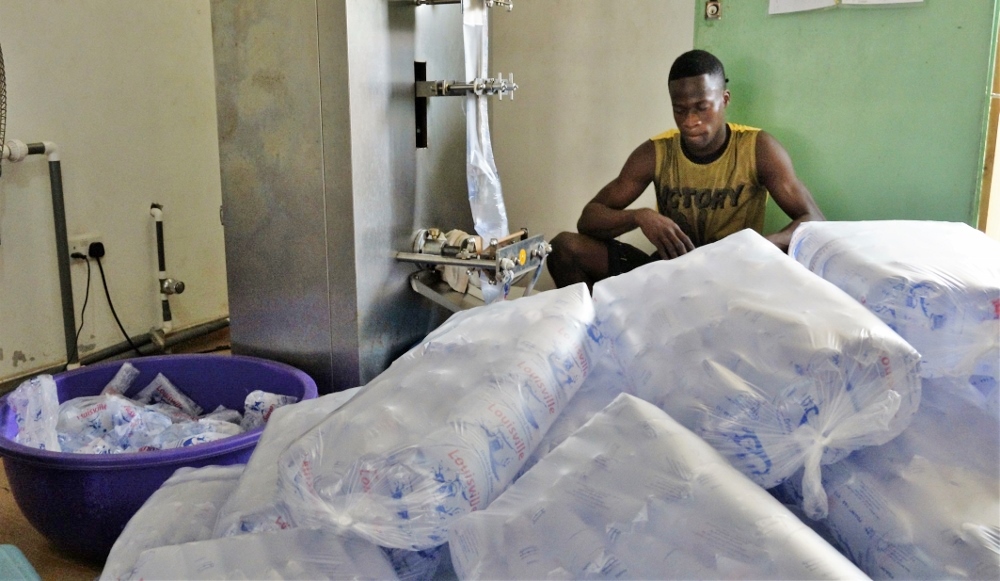 Water sachets, sold for 20 pesewas (5 cents), are the most popular way to drink water in Ghana, since all drinking water must be purchased. However, due to competition, the profits are low. Boatemaa hopes the juice will be more profitable. (GSR photo / Dana Wachter)

As part of their commitment to women, the sisters will allow them to purchase a 30-pack of water sachets on credit. The women recoup the money by selling them individually, so they can pay back the sisters and take a few cedis home. A half-liter bag of water is sold for 20 pesewas (5 cents).

The sisters also have employed eight people in the factory, including local women.

The nuns are trying to scale up, to purchase more juice-squeezing machines. If a big order comes in from a private group (they can sell in bulk to groups within the church before obtaining the small business license), they have to stay up through the night squeezing oranges, because their single machine is so slow.

The bottling takes place in a converted garage, but they want to expand further. Last year, a blight on their citrus fruit meant the convent had to cut down all of their orange trees before the infection could spread, on advice from a local agronomist. They are replanting after this year's dry season, but it will be a few years before the trees can produce the amount of oranges they need for the juice. Now they buy oranges from local farms, and the profits vary widely depending on the quality of the oranges.

The bottling efforts may be small, but it's part of a trend of sisters looking for creative business solutions to support their ministries, rather than relying on donations. In Uganda, sisters focused on agriculture as a path to financial stability, though they found that the profits were not very large.

"We didn't think of having [the bottling] as a business, but as it was growing and demand increased, we realized we could make money to fund more of our projects," said Boatemaa. "As we are all striving to help the needs of the community, this is one way we thought of to help." 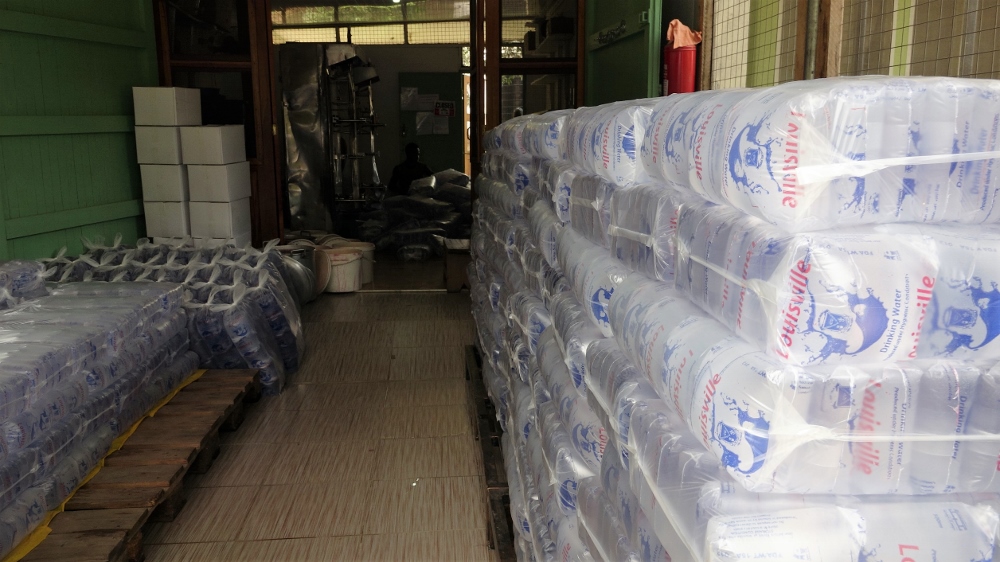 Pure orange juice has 21 grams of sugar (fructose) and 112 calories per 248 grams (1 cup / 8 ounces). It contains Vitamins C and A and some iron and calcium. The same amount of Coca-Cola, for example, is 100 calories and contains 26 grams of sugar, with no significant nutritional value.

Q & A with Sr. Melinda Pellerin, on having two callings

The long legacy of service