Catherine Osborne liked to show a photo, taken in 1946, to the students in her introductory theology class when she taught at Fordham University. Now she is a postdoctoral fellow at the Cushwa Center for the Study of American Catholicism at Notre Dame University, a neighbor and beneficiary of a revolution that once began at Saint Mary's College, an all-women's institution. She wanted to make a point to some young women.

"I'd show a photo of the founding dinner of the Catholic Theological Society of America in 1946 . . . and I'd ask the students to tell me what they notice about the people attending this dinner. It's not a hard question."

Her students were quick to respond — they noticed every person in the photo is male, is white and is wearing a Roman collar.

"That was still the face of theology" until Holy Cross Sr. Mary Madeleva Wolff, then the president of the college, established the first graduate theology school for women. Until the founding of the School of Sacred Theology at Saint Mary's women had been excluded from the theological profession.

Wolff's intention, Osborne tells her class, was to increase the education level of sisters teaching in Catholic schools. "But the school's very existence was so radical that it ended up laying the groundwork for the first generation of academically trained Catholic women theologians," she notes.

Wolff's story reveals the ingenuity, persistence and vision of a pioneering nun. It also is a testament to education and the way women have been and are continuing to change the face of Catholicism.

The date was March 23, 1943. Wolff, 56, had already been president of Saint Mary's for nine years, was recognized by her peers with a keen ability for clear thinking. She had been appointed to special "problem solving" committee for the Midwest chapter of the National Catholic Educational Association. On that day the committee had taken up the issue that sisters were being called to teach religion in Catholic institutions across the nation, but nowhere could they study higher theology.

"The flagrancy of this situation was immediately recognized," Wolff later wrote.

A subcommittee was formed that day to investigate possibilities. Wolff was asked to head that subcommittee.

She started by contacting Midwestern Catholic Universities, inquiring whether they would admit women into their theology programs. Quickly she was turned down by Notre Dame, Saint Louis, Marquette, Loyola, and DePaul universities. She reached out to Catholic University of America — and again the answer was "no." No women allowed.

She noted the universities at the time were facing other pressing problems, including uncertainties about enrollment during the World War. No one wanted to take the time to consider her request.

Rebuffed, Madeleva reported what she called her "complete failure" to Bishop Edwin V. O'Hara, then chair of the Episcopal Commission on the Confraternity of Christian Doctrine. He encouraged her to begin a theology program at Saint Mary's, the first open to women.

Her immediate reaction, she recorded, was one of presumptuousness "for such an undertaking." But that was short lived. She decided to go after faculty and found three priests, including two Jesuits, who agreed to initially anchor the program. It took her only months to get the program started. The new School of Sacred Theology opened its first class on June 19, 1943.

"The response was so immediate and the enthusiasm so spontaneous and Pentecostal that we were left in no doubt as to the future of the school," Wolff typed in a personal reflection kept in the Saint Mary's College archives in room 105 in a building that now bears her name.

"There were, when we set up our program, no Sacred Theology graduate schools in the United States where women could be prepared to teach theology and sacred scriptures at the same level and with the same competence as profane subjects on the college level," she wrote.

For more than a decade Saint Mary's College School of Sacred Theology was the only place in the world where a layperson, male or female, religious or lay, could earn an advanced degree in Catholic theology. As women gained theological degrees at the school they soon began to populate its faculty. The program eventually produced 360 master's degrees and 74 doctoral degrees before it closed, after women were being accepted in theology graduate programs across the county. The school's eventual demise resulted from its very success — but not before Wolff, or Sister Madeleva, as she is more widely recognized, had forever changed the face of Catholic theology.

Her impact on the course of religion in U.S. history is not unrecognized though her important contribution is not widely celebrated outside Saint Mary's College. Ann Braude, director of the Women's Studies in Religion Program at Harvard Divinity School, asked recently to offer the names of women who radically changed the course of religious history in America, gave two names: Pauline Murray, the first African American woman ordained an Episcopal priest, and Wolff, who integrated Catholic theology.

Wolff had a knack for imagination. In 1941, without consultation, but acting on a moral impulse, she moved to admit to Saint Mary's its first African American student. Some alumnae were enraged, she wrote in a reflection. "They told me that as a northerner I did not know what I was doing." She simply ignored her critics.

By the time Wolff had completed her 27-year tenure as Saint Mary's president, in 1961, she had quadrupled the school's enrollment and tripled its teaching staff.

Evaline Wolff was born May 26, 1884 in Cumberland, Wisconsin. She grew up close to nature in northern Wisconsin where her father was a harness maker for the teams that carried timber from the still virgin forests to build railroads. "We lived with the mystery of the seasons," she wrote in her autobiography, My First Seventy Years, published in 1959. Nature revealed "the continuing mystery of creation."

She had an early interest in education, attending the University of Wisconsin then transferring to St. Mary's to earn her bachelor's degree in 1909. She entered the Holy Cross order while at Saint Mary's and took her final vows after graduating, in 1910.

She began teaching at Saint Mary's, but wanting further education she began studies at Notre Dame in 1916 and earned a master's degree in 1918 in literature. After spending the next few years out west as principal of Sacred Heart Academy in Ogden, Utah, and later Holy Rosary Academy in Woodland, California, she went on to school once again, studying at the University of California, Berkley, where in 1925 she earned a degree in philosophy, the first sister and one of the first women to do so. Still following her academic bent, she went on to specialize in medieval literature, doing post-graduate work at Oxford University. She was appointed founding president of St. Mary of the Wasatch College in Salt Lake City, Utah, a post she left to take over at Saint Mary's in 1934.

Wolff enjoyed literature, especially poetry, which she read and wrote as a form of meditation. Her poems — indeed, more than a dozen books of poetry — are filled with natural, and sometimes, sensual, imagery for which her religious superiors sometimes took her to task. Her poems and verses were popularized at the time by Hallmark, which published them on their Christmas cards and sympathy notes.

"I wrote at least one poem a month over a period of fifteen or twenty years, every one of which I sent out at once to earn its living by publication in some magazine," she once wrote.

These figures and others sought her advice and counsel. After publishing the first issue of Sports Illustrated, Henry Luce wrote Wolff, asking her to offer a critique. She wrote back: "I can think of no future in which SPORTS will not make the greatest appeal to the greatest American public. She found it to be "uniformly clean" and "with the minimum of temptations against the decencies of life," the greatest of these coming in the form of advertising. Thomas Merton sent his manuscripts to Wolff for review before he sent them off to be published.

She kept an active correspondence with Hilton over more than a decade and he contributed to the school. (Osborne is leading an effort at Saint Mary's to digitalize her voluminous writings.)

Wolff also borrowed from poet Gerard Manley Hopkins' identification of God as "beauty's self and beauty's giver," according to Porter Mandell. Like Hopkins, she accepted the human imperative to "give beauty back."

"Such beauty reveals . . . the presence of the incarnate God in all creation . . . and the sacramentality of everyday life."

Porter Mandell said Wolff's feminist instincts were influenced by the stories of women in the Old Testament and by the seventh-century saint, Hilda of Whitby, founding abbess of the monastery of Whitby, a woman who was viewed as one with great energy and a love for the arts — one not unlike Wolff herself.

Asked to describe Wolff, Porter Mandell uses words such as "intelligent, imaginative, obstreperous, and charming." "She knew the glamor of religion."

Wolff was also a good fundraiser. She also knew that for Saint Mary's to succeed she needed to cultivate money. "She cultivated the rich and the famous," said Porter Mandell. "Meanwhile, many, including her own superiors, found her as too worldly. . . . She didn't live within traditional rules. She was always revising those rules."

In 1985, to honor Wolff, to spread her spirit, and to provide a forum for women's concerns, Saint Mary's initiated the Madeleva Lecture Series, an annual event that draws a prominent woman theologian to the campus to speak. In April 2000 the first 15 lecturers assembled at Saint Mary's and over three days drew up a 300-word manifesto, a "Charter for Women of Faith in the New Millennium."

"The way things are now is not the design of God," the charter said. Officially the document was called "The Madeleva Manifesto: A Message of Hope and Courage" and it invited women everywhere to imagine different church structures and called upon them to reject those which excluded women from full participation and ownership.

Immaculate Heart of Mary Sr. Sandra Schneiders, professor of New Testament studies and spirituality at the Jesuit School of Theology and the Graduate Theological Union at Berkeley, California, one of the lecturers, characterized Wolff as someone who was "coloring outside the patriarchal lines long before we realized that those lines did not, in fact, provide the whole picture."

The Madeleva group's manifesto was presented to the public, proclaimed in both English and Spanish by Benedictine Sr. Joan Chittister and Jeanette Rodriguez. St. Joseph Sr. Elizabeth Johnson called the manifesto a message for those who are "hanging on by their fingernails, in deep spiritual distress."

Click here or at the bottom of this article to read the manifesto.

Last April Saint Mary's College commemorated the 30th anniversary of the Madeleva Lecture Series with panel discussion celebrating St. Mary's Voices of Young Catholic Women project. Between August and November 2014, St. Mary's students and the college's Center for Spirituality invited millennial Catholic women to share with Pope Francis their love for the church and the unique challenges facing young women in contemporary society. The project collected 225 letters and pieces of artwork from women across the United States. Last November the contributions were personally delivered to Pope Francis.

In her 1959 autobiography Wolff listed her educational goals, using familial and theological terms. "I had watched beauty go begging for a home and a family. I knew that of the trinity — goodness, truth and beauty, each an equation for God — beauty is the most palpable, the most irresistible. I have called it God's visibility."

The caretakers of Wolff's open, forward-looking, but well grounded vision will tell you it remains alive on the campus to this day.

[Tom Fox is director of Global Sisters Report and can be reached at tfox@ncronline.org.]

Read "The Madeleva Manifesto: A Message of Hope and Courage" here. 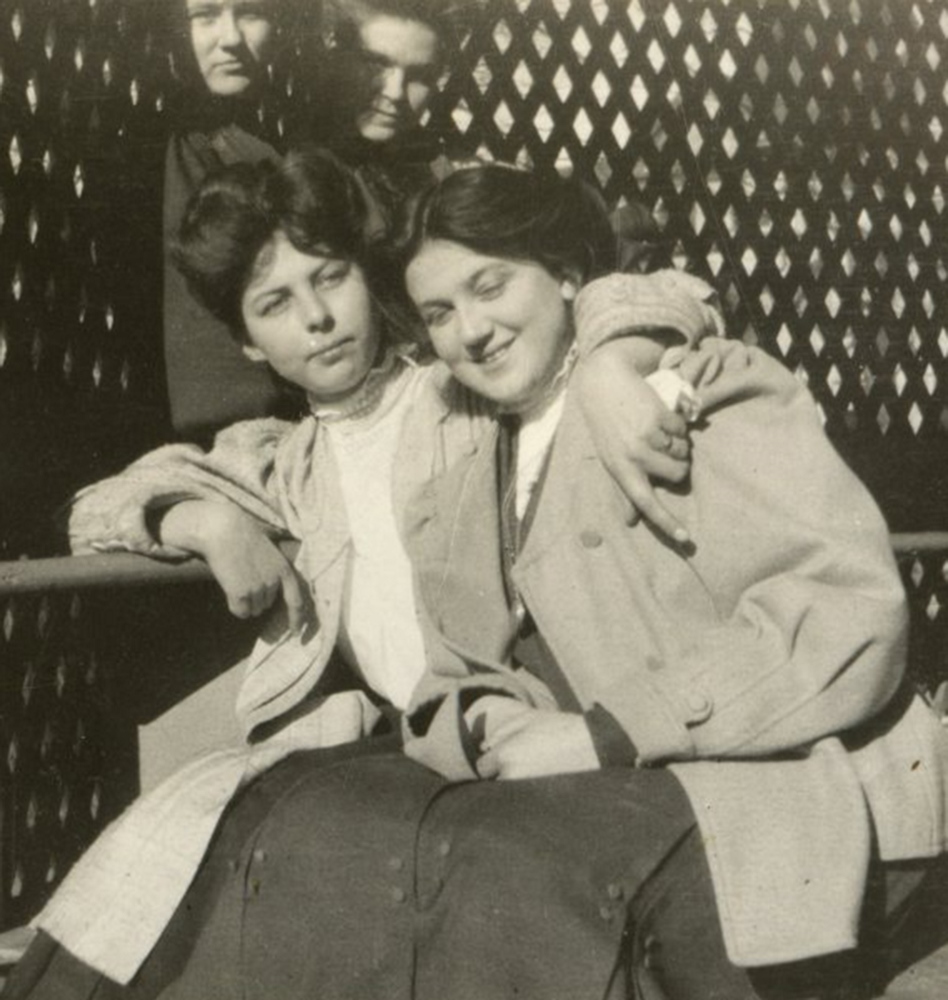 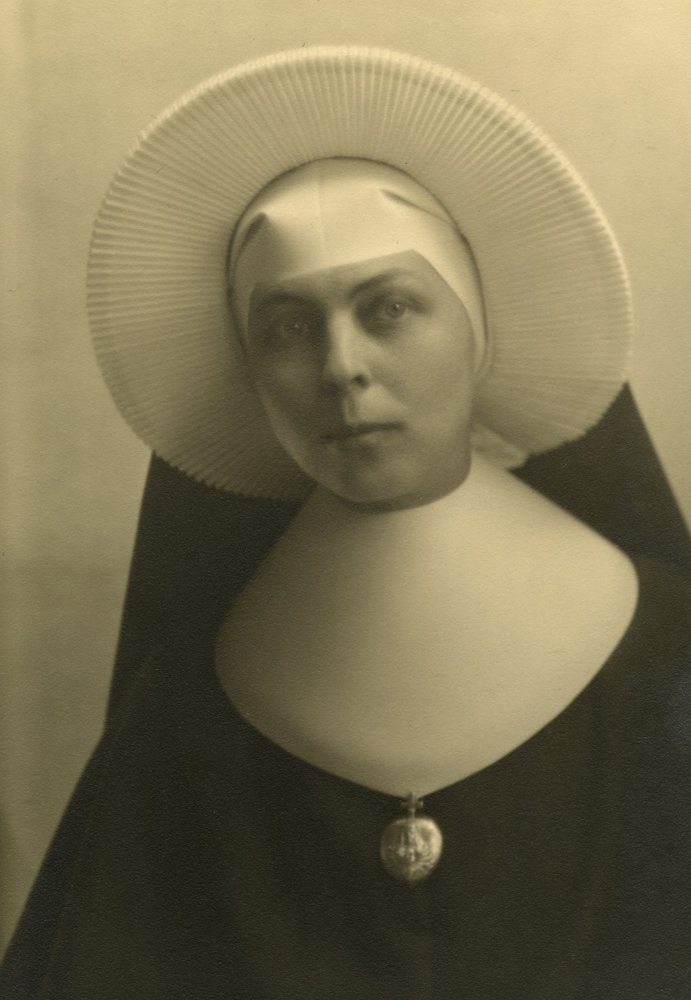 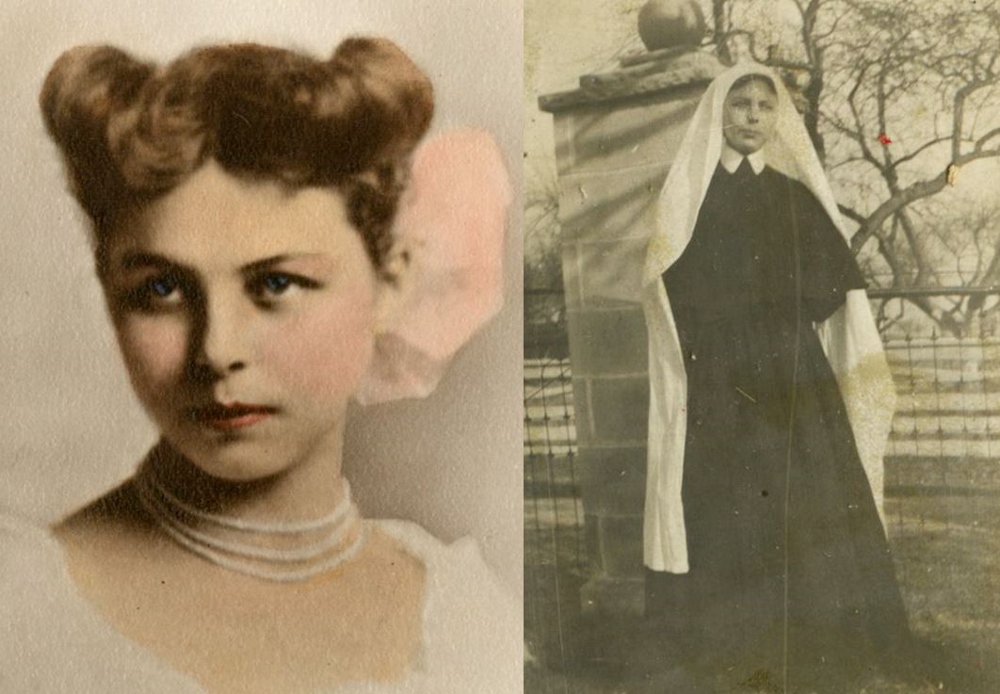 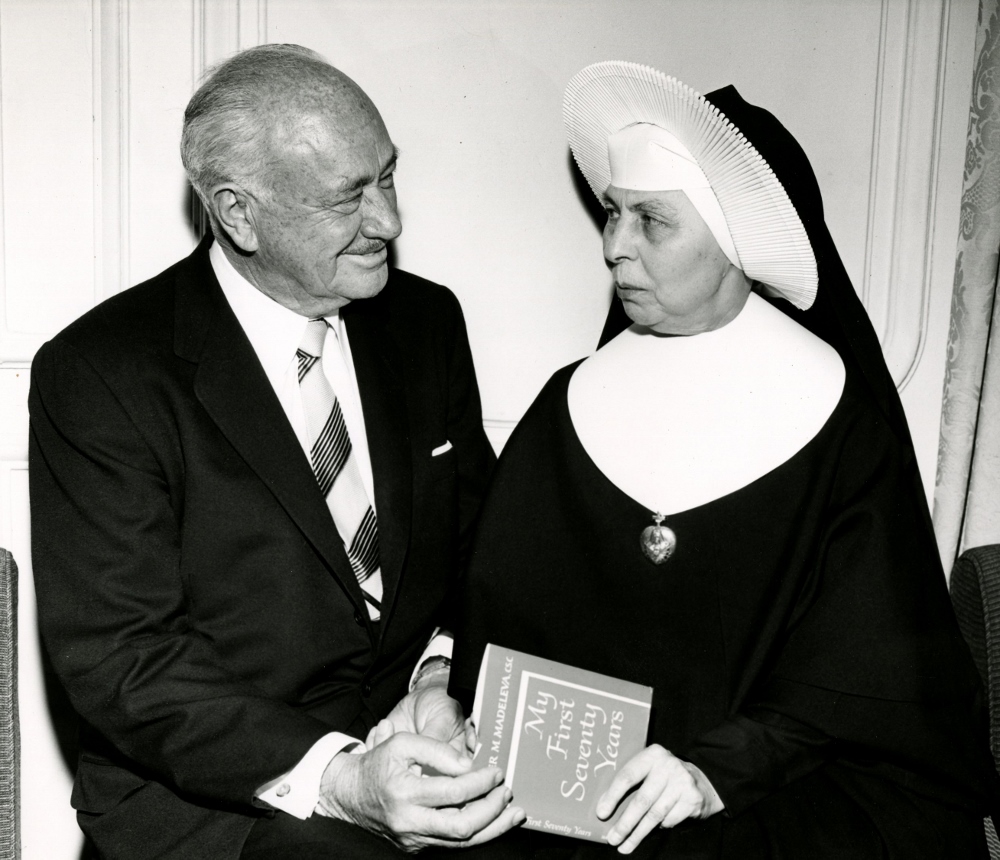 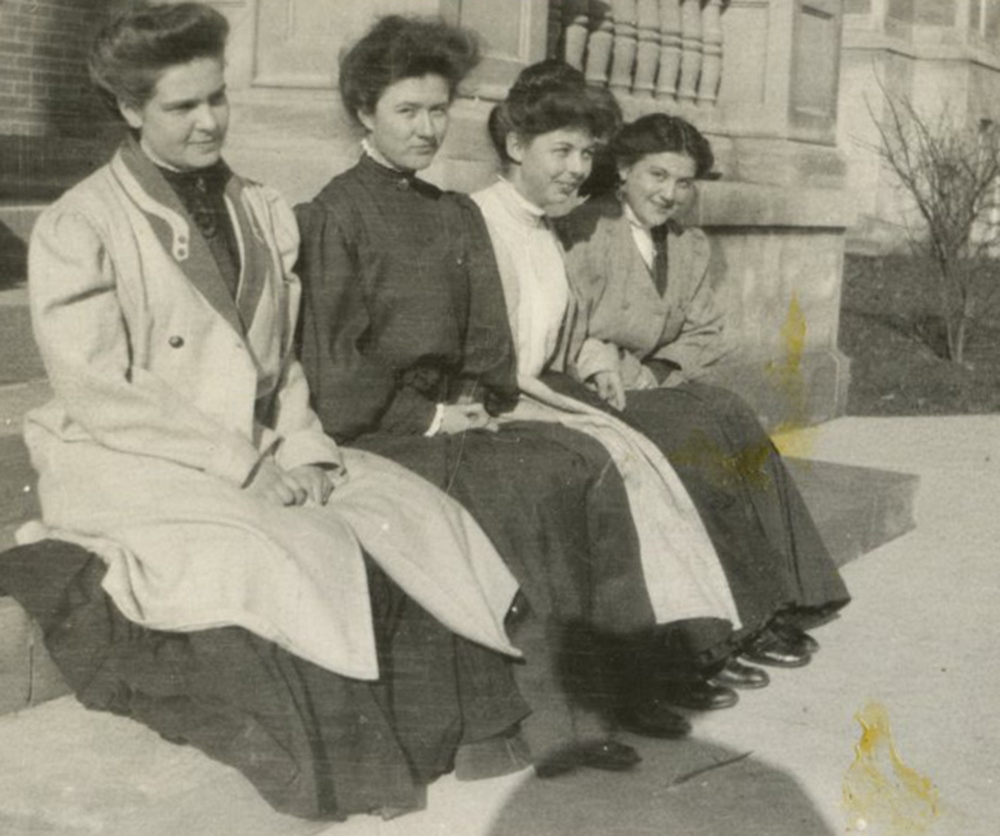