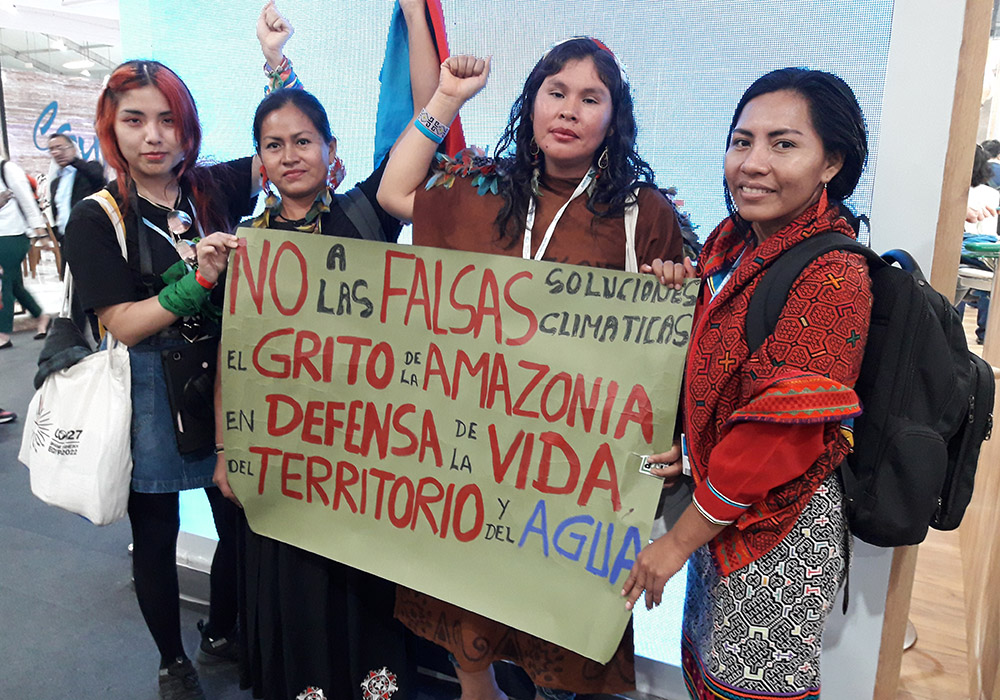 At COP27 in Sharm el-Sheikh, Egypt, a group of young people from Peru with a protest sign, demanding: "No false climate solutions, the Amazon cries out in defense of life, land and water." (Courtesy of Ana María Siufi)

In light of the discouraging climate change negotiations that have been going on for three decades, United Nations Secretary-General António Guterres has indicated that the pledges made by countries so far are inadequate. "We are in a life-or-death struggle for our safety today and for our survival tomorrow," he said. "We are on a highway to climate hell with our foot still on the accelerator. … Humanity has a choice: cooperate or perish."

The 27th Conference of the Parties to the U.N. Framework Convention on Climate Change, COP27, was recently held in November to review and move forward on climate change accords. I attended with a delegation of Mercy religious congregations that traveled to Egypt, and we had a challenging, educational and also disappointing experience.

As members of civil society, we experienced the beauty of interculturality expressed in thousands of faces, clothes and languages. We appreciated the cries, risks and resilience shown by women, youth, Indigenous people, and activists who shared their lives and ancestral cultures, and who showed their frustrations and resistance. They were all united in the struggle to stop environmental and climate devastation and the multiple threats such as land trafficking, drug trafficking, armed groups, and corporations.

The government delegations had almost no interaction with us, as they met somewhere inaccessible to our group.

It is clear that the powerful nations who are most to blame for climate change are falling short in paying for the effects of their greenhouse gas emissions, which have been negatively affecting the most vulnerable regions. The climate debt of the powerful nations far exceeds the debt the poorest countries owe them, but here's the difference: The poor countries are obliged to pay their debt! The conference was extended for one more day, after which it was agreed to establish a fund to compensate for damages and losses that have been occurring for years. The question we can ask ourselves is: Can the money be used to repair all the destruction of nature, or is there much that is beyond repair?

The role of the Egyptian president as host of the conference was unclear, which, in terms of the energy issue, did not help to move towards clean and renewable energies.

There were stringent security precautions in place due to the attendance of over 100 heads of state and the threat of violent acts, and environmental groups feared that the Egyptian dictatorship would prevent demonstrations or parallel activities by environmental groups, which are typical at these sorts of summits.

We had the opportunity to hear from Indigenous people from Siberia, the Arctic, the Amazon, Colombia, Mexico, Honduras, the Philippines, and other places as they shared their experiences with colonialism's violent destruction of their cultures, the actions of criminal organizations, and the criminalization of protests. Their demands to participate in projects against climate change, public policies, and legislated norms were highlighted. They protested against bureaucracy and pointed out that most of the funds that should be appropriated for the communities that inhabit and care for the territories do not reach them. In summary, those who care for 80% of biodiversity demanded that their work be "decolonized" and indigenous methods used, and ancestral wisdom be respected, and that the illegal economy, the economy of deforestation or polluting projects, land trafficking, and the threat of prosecution or unpunished armed groups be eliminated.

With rituals and exhibitions, empowered women made their voices heard about their sufferings and struggles against invisibility and gender exclusion. They feel that they are daughters of Mother Earth and the Moon — caretakers of seeds and food storage, and water managers — and they know how to adapt their knowledge to the consequences of climate change and pass it on to their descendants. They demanded to be at the negotiating table on climate change, that their cultural and gender identities be respected, and that their methods of forest restoration and water care be respected. In addition, they demanded reparations for the great damage that colonization did to their families by robbing them of their children, their lands, their culture, and their dignity.

For decades, the alarm has been sounding about a mass extinction caused by a capitalist-extractivist economic system that is unsustainable but refuses to carry out the economic-cultural, productive, and fair consumption revolution needed to avoid collapse. Suspiciously, corporations in the oil, technology, agribusiness, and other sectors, which are responsible for global warming, were present as sponsors of this conference! 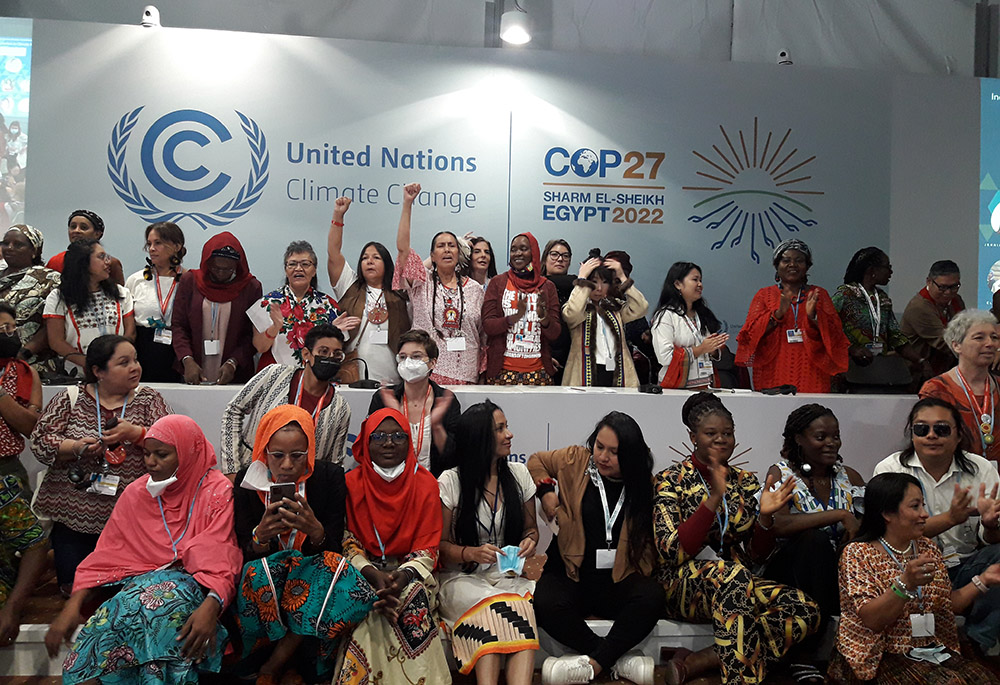 Women from all over the world present their struggles for climate justice at COP27, held Nov. 2022 in Sharm el-Sheikh, Egypt. (Courtesy of Ana María Siufi)

"Humanity is heading for an abyss, for a warming of over 2.5 degrees, with devastating effects on our lives on the only planet we have," said Annalena Baerbock, Germany's foreign minister, in her opening speech at COP27. Scientists, Indigenous people, activists, religious leaders, philosophers, economists, peasants, and youth demand actions, not words and false solutions that are more "business as usual": as for example, green hydrogen, hydroelectric dams, and genetic manipulations.

It is time to educate and raise awareness, to point out the causes of climate change. It is time to demand differentiated responsibilities, to influence governments to stop their extractivist policies. It is time to make a just transition, to help the victims and millions of climate refugees, to claim trampled rights, to pray for the persecuted, and to defend climate justice.

If we as citizens, united in solidarity, want to have a future as humanity, we are the ones who have to: push and live the change; weave networks to pressure governments or companies; prevent the expansion of extractivist, productivist, and consumerist practices; learn respect and love for Mother Earth; and take to the streets to take care of the threatened life of our common home.

This column was translated by Sr. Helga Leija.