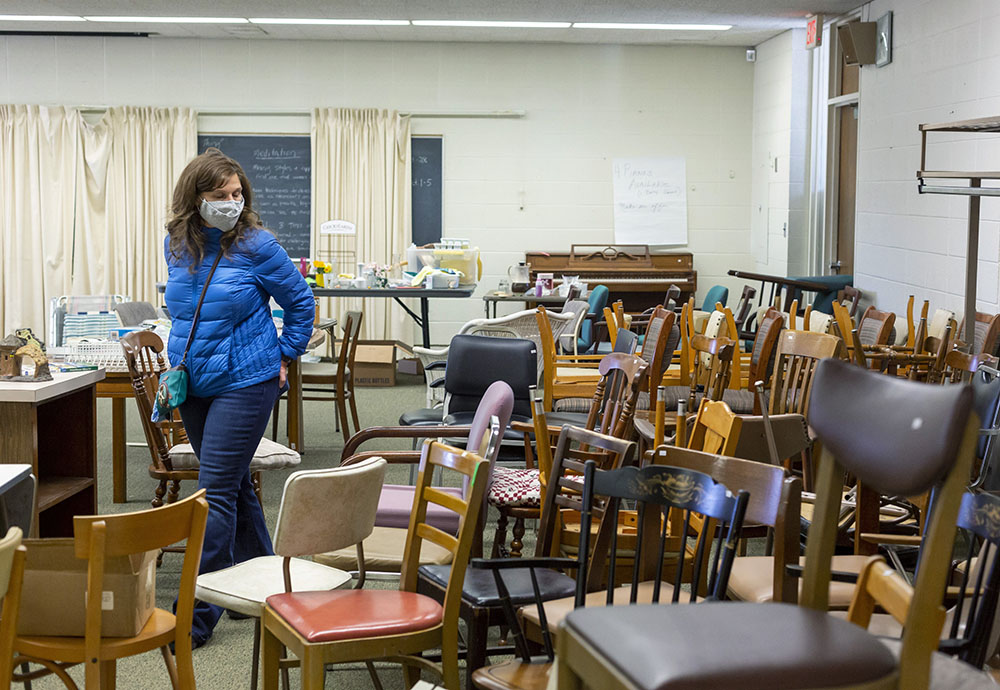 A woman in Farmington Hills, Michigan, browses items March 19 at the estate sale held by the Sisters of Mercy as they clean out their former convent. (CNS/Jim West)

The Sisters of Mercy in Farmington Hills, Michigan, hosted an estate sale for the ages March 18-20, emptying a former convent of 60 years of accumulated belongings.

"My concern is not the money," said Sr. Mary Ellen Howard, chair of the community's Campus Advisory Committee, which made recommendations on what to do with the property and buildings. "My concern is we've got to get rid of the stuff."

There were hundreds of chairs, recliners, dressers and desks; several pianos; two portable fireplaces; an aviary; power tools; food service equipment; dozens and dozens of appliances; and hundreds of place settings in a plethora of patterns.

And, of course, there were "1000s of religious items," including crucifixes, rosaries, plaques and figurines, according to the website for Aaron's Estate Sales, which handled the sale. The large chapel had been stripped of its consecrated items in the fall; those items were handled by the Detroit Archdiocese.

"We're letting go — this is how we live our vow of poverty," Howard said. "In this kind of process, you learn what's important, and it's not things. The things can go. In fact, please take them." 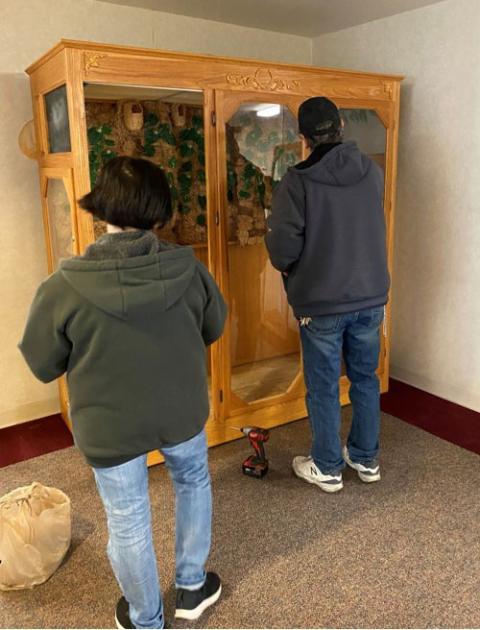 The buyers of an aviary dismantle it to bring home for their 15-year-old iguana. (Courtesy of the Sisters of Mercy)

"It was insanely busy and incredibly successful," Dadswell said. "We did over 1,200 transactions."

The convent was built in the 1960s for novices and postulants, right before the number of sisters began to trend downward.

"From the day it was built, it was too big," Howard said. "The expense was crazy, and the carbon footprint was worse. It was just nuts."

Howard said staffers recently calculated that each sister living at the complex had about 3,000 square feet of space apiece. Now, only a handful will live there, as a developer plans to turn much of the campus into senior living. The rest of the sisters went to a nursing home, assisted living, or rented houses and apartments.

A developer has been chosen but is doing a one-year due-diligence effort, so no contracts have been signed.

"It was built for young people, and now we're trying to take care of old people in it, and it just doesn't work," Howard said. "But it's very hard. We have lots of memories. Beautiful moments, all the memories of wonderful events and gatherings we had there. It's very hard to walk away from all that and see it demolished."

The sale disposed of an estimated three-fourths of what was available; items that didn't sell will be given to nonprofits.

Sr. Rita Valade chaired the community's Furniture Repurposing Committee, which oversaw the task of emptying the buildings of its contents.

"It's a huge relief," Valade said. "We've been working on how to navigate all this during COVID. One area where sisters were living, we couldn't even get back there to do inventory" because of the pandemic restrictions.

The coronavirus made moving especially hard. The community could not gather for a sendoff for the sisters, and once they got to their new homes, they couldn't have visitors.

"We couldn't be our community," Valade said.

Howard said that was the most difficult part of an already difficult process.

"They have this big upheaval in their lives, and then the pandemic keeps us from visiting them. I hate it," Howard said. "All this has been a mammoth project to get them settled, and they're elderly for the most part, and they need support. But the pandemic — it just complicates everything."

But thanks to the sale, the process is nearing its end. Still, you have to wonder: Did the sisters never throw anything away?

"No. The answer is no," Howard said, laughing. "We just moved it to the basement."