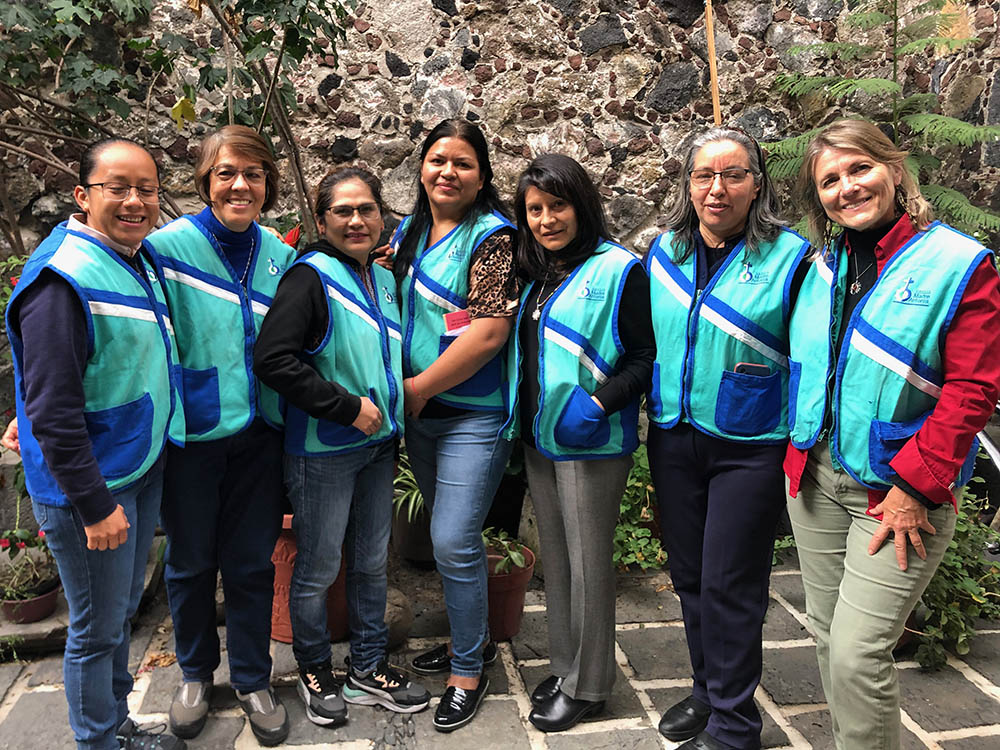 The sisters and their helpers pose in the patio of La Palmita for a photo after a recent abordaje, or outreach session in the streets of La Merced. From left are Novice Sister Isaura, Sr. Manuela Rodríguez, Mariana Gutierrez, Cecilia Martínez, Sr. María Rosas, Sr. Carmen Paz and journalist Tracy Barnett. (Courtesy of Tracy Barnett)

On Oct. 18, I headed to Mexico City to see a shadow side of this mega-metropolis. But every shadow has its light, and that's what I was there for. I had accepted an assignment from Global Sisters Report, and in working with this magazine over the years, I have been privileged to spend time with some of the most forward-thinking, brave and effective leaders I have ever met. This time was no exception.

Casa Madre Antonia, a project of the Hermanas Oblatas del Santísimo Redentor, is the bright spot in the heart of the prostitution zone. The Casa finds itself in the midst of a double celebration: the 200th birthday of its founding mother, Antonia María de Oviedo y Schönthal, and its 150th year in Mexico.

I arrived Tuesday evening in time for a conversation with the sisters at the Casa, in a peaceful neighborhood some 20 minutes from the chaos of La Merced. They told me of their work to address the women's needs on all the levels: spiritual, educational, emotional and vocational.

But the first step is on the streets, where the sisters engage the women face-to-face. I was intrigued to see how such a process might work, and how these soft-spoken women might interface in such a tough environment. Soon enough, I'd see for myself.

"Above all, we see in them human beings, daughters of God, with all their rights, capacities and potential," said Sr. Manuela Rodríguez Piñeres, a tall Colombian with a quick wit and a passion for justice and women's rights. "We are born like this, with that spirituality of great respect for the person, in the style of Jesus. The important thing was not the doctrines, but the person in front of him."

Casa director Sr. Carmen Paz's Guatemalan heritage came through as she spoke of the way the sisters weave a history with each of the women. "They talk about their realities, their history, especially their ancestors ... a wealth that has been handed down from generation to generation.

"But there is also the other part, that prostitution has also occurred at those levels that began from the grandmother to the daughter, to the granddaughters — and with the risk that it goes on even to the great-granddaughters."

So, part of their work is to help the women break that chain, to visualize that "prostitution does not have the last word, and that they can look for other alternatives," Paz said. 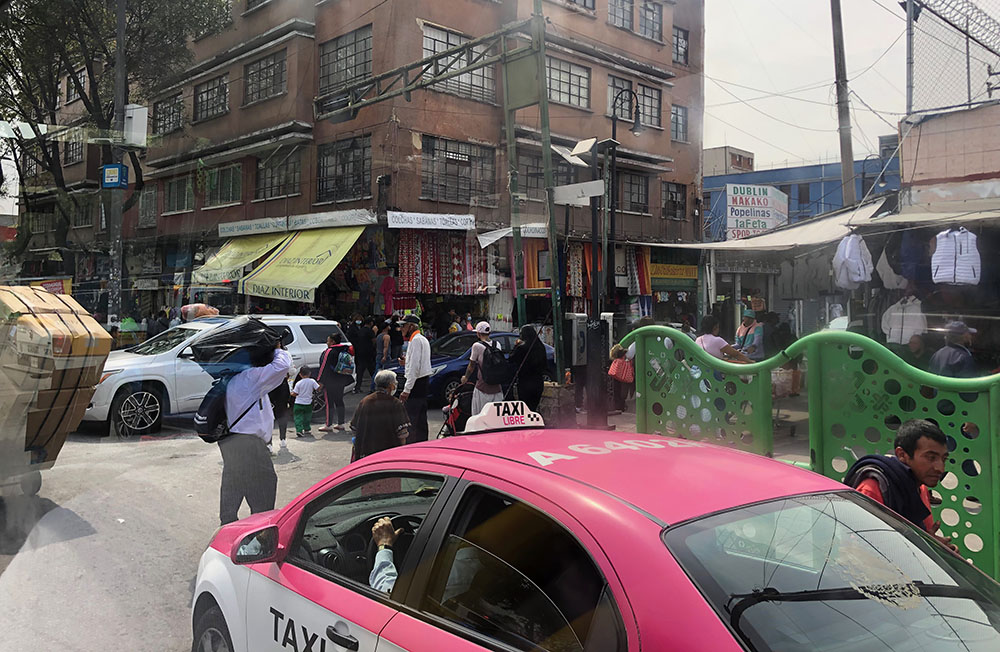 Paz is especially proud of their natural medicines project, which has created a source of income and pride for a number of the women. She listens as they work together and encourage each other. "Today I was talking with one of the girls ... and she says, 'I feel so good. ... I would like to stay here with you working, talking to the compañeras, encouraging them to succeed.' "

When people ask the sisters how many women they have managed to get out of the prostitution business, Paz said they respond with, "We are not going to get them out. They are going to make their lives, and with the examples [of the women before them], they are the ones who are going to transcend."

In a class on 'self-perception'

The Casa is welcoming, with airy bright rooms painted in vivid colors; the entryway greets visitors with a colorful mural with an African theme. A black Christ hangs crucified on the Tree of Life, surrounded by images of his work in liberation of the human spirit. There are quiet spaces for reflection, like the adoratorio, a room made into a chapel adorned with fresh flowers, lit candles and a portrait of Madre Antonia as a young woman.

Wednesday morning, we gathered in the library for my first meeting with the women. I had never known a sex worker, and I didn't quite know what to expect. What I didn't expect was the ordinariness of the encounter.

They were attending a class on "self-perception" with psychologist Raúl Galindo Cadena. The women chatted amiably, each gathering her notebook from a pile. The group was diverse in age, ethnicity, style and education level, and the mood was lighthearted as they took their seats. They seemed happy to be together, in the safe space that is Casa Madre Antonia.

Many nodded in recognition as Galindo outlined the signs of a toxic relationship, and gave advice on how to set boundaries. "If they don't respect your boundaries, it's not love," he emphasized.

"A toxic relationship is one that makes you feel devalued," he explained. "The person wants to have complete control and power in the relationship. There's a belief that the woman should dedicate all her time to the house, and the man should rule; when he comes home, the woman should bring his slippers, the newspaper and the remote control."

The women looked at each other knowingly. When they spoke up, they shared stories of demanding partners, manipulative children, heavy workloads. It could have been any group of women, anywhere.

At the beginning of the talk, Rosas had introduced me to the women, so they knew I was there to write a story. A couple of them met my eyes during the talk and their smiles were warm, so I approached them after the session ended. 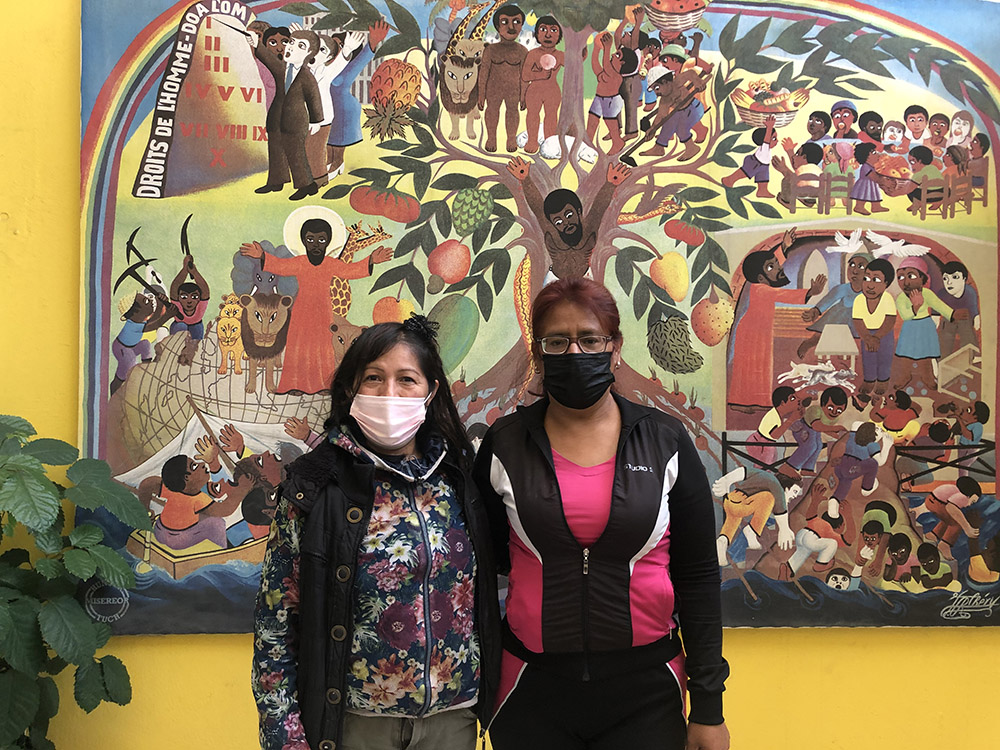 "Maitena," left, and "Lorena," two regular participants in the Casa Madre Antonia's programs, in front of the mural at the entrance of the Casa. "The sisters inject me with courage," Lorena said. (GSR photo/Tracy Barnett)

Maitena and Lorena, they called themselves (they changed their names to protect their identity), and while they were reserved about the details of their work, they were eager to talk about the sisters and the impact they'd had on their lives.

Lorena still counts sex work among her various gigs — house cleaning, laundry, cooking — but thanks to the support of the sisters, that has been changing. Lorena started coming to the Casa when the pandemic emptied the streets, and she found a supportive community of mujeres de lucha — women who are fighting for a better life.

"The sisters inject me with courage," she said.

Around the wishing well

My last morning, I joined the women around the wishing well in the Casa's garden as Rodríguez shared the story of Hagar, putting the ancient story in modern context. Abraham's wife, Sarah, who was infertile, gave him her slave Hagar so that the family would have an heir. But when God miraculously gifted Sarah with the ability to bear a child, Abraham dismissed Hagar and told his wife, "Do with her what you will."

"And he washed his hands of her, like men do," Rodríguez continued. "Many times, the men get the woman pregnant and leave. Don't you know any such situation?" 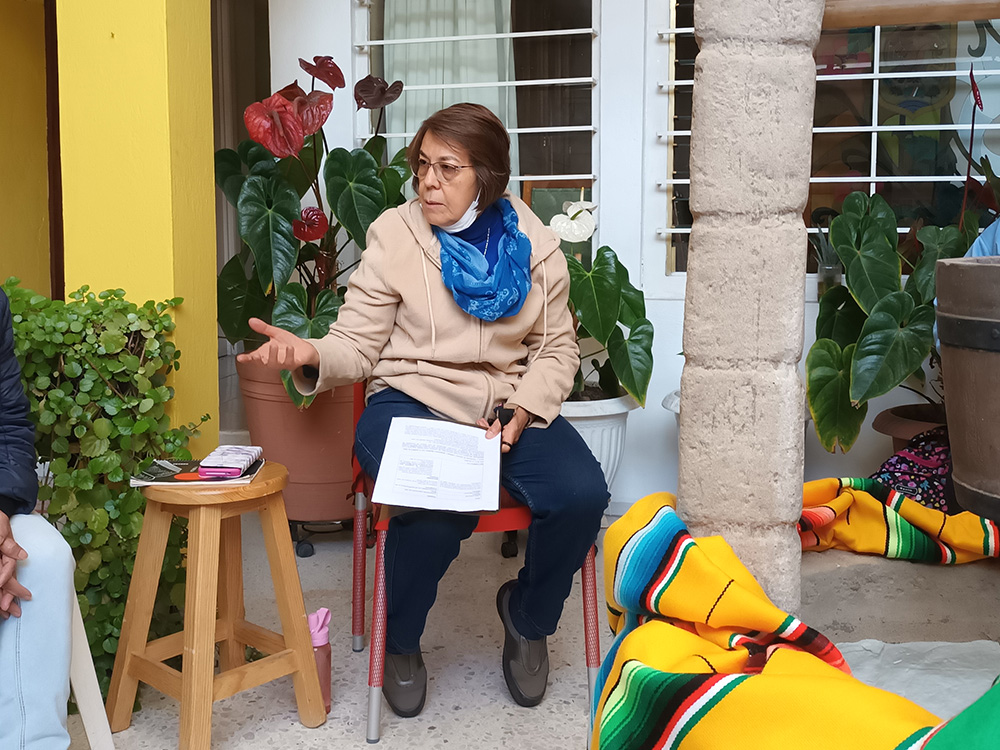 Sr. Manuela Rodríguez gathers the women around the "wishing well" in the garden and shares spiritual formation every Thursday. This October morning, she gave a modern twist to the story of Hagar, the slave of Abraham's wife, Sarah. (GSR photo/Tracy Barnett)

Hagar was just one of a long line of biblical women who were cast away, mistreated or made invisible by the men in their lives, said Rodríguez, who advised reading the Bible with a skeptical eye, as it was written by men in a time when machismo reigned — not unlike the present time in that regard.

"Sometimes we let[the men] control us, with our cellphones, with their questions. ... The macho customs of yesterday and today continue perpetuating inequality," Rodríguez said.

"But we are human beings, made in the image of God. And we cannot continue lowering our heads."

After accompanying Paz in her outreach work in the streets, on my last afternoon, I gathered with the sisters and their helpers in the patio of La Palmita (their space in the heart of La Merced) for a final group photo. The day before, Cecilia Juárez Martínez had declined to have her photo taken, after sharing with me in painful detail her story as a sex worker.

Today, as she moved without hesitation to join the photo shoot, I saw a different Martínez: confident, happy. I checked with her to see if she felt comfortable with us featuring her photo here.

She paused for a moment, then smiled. "Yes," she said. "I would like that." She stood tall in the center, head high, with a proud smile on her face.

Read this next: For 'sacred' women in the sex trade, Mexican sisters offer a healing space