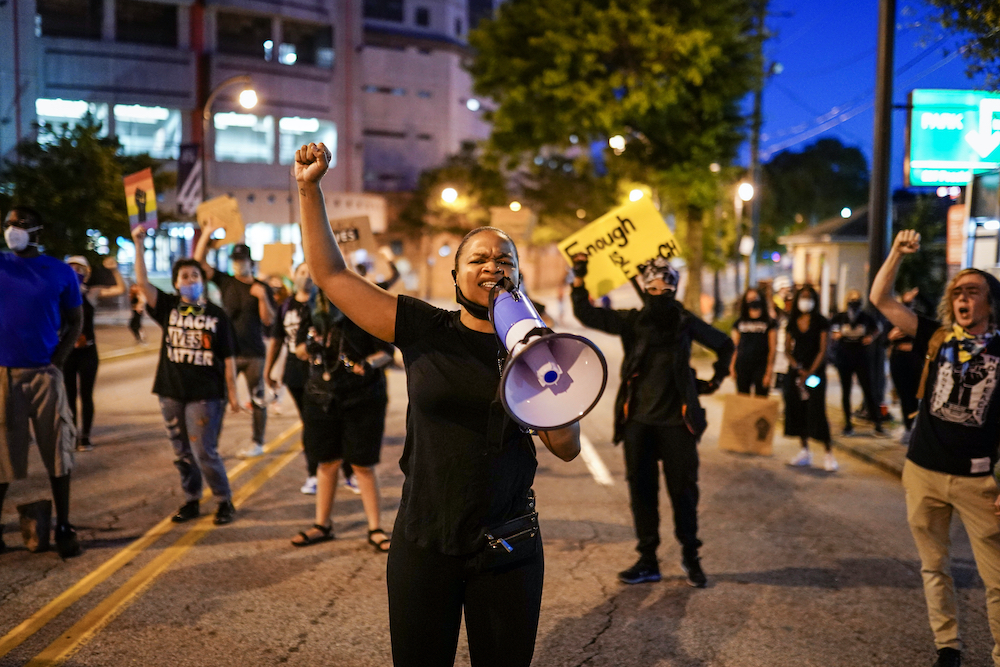 Protesters rally during a June 17 demonstration in Atlanta against racial inequality and the police shooting death of Rayshard Brooks. (CNS/Reuters/Elijah Nouvelage)

In Greek, the word for Holy Spirit is derived from the word pneuma, which is also the word for breath. At the first Christian Pentecost, the Spirit was revealed in fire and expressed in unprecedented dialogue between diverse ethnic groups. This year, since the church celebrated Pentecost in the midst of a pandemic and widespread protests, these spiritual realities bear new physical meaning, and we are called to embody the Spirit of Pentecost going forward.

George Floyd pled for air as he died: "I can't breathe," he said. His voice was ignored, and now he is gone. Floyd's murder was the spark that ignited — again — the flames of protests nationwide. Standing against racism and systemic racial injustice in the United States, people of color and white allies have united to amplify the voices of Floyd and innumerable others who have been ignored, violated and silenced — to demand change.

Contemporary evidence suggests that current levels of insecurity and economic poverty in minority communities can be traced directly to historical discrimination. State-sanctioned practices — such as Jim Crow laws, discrimination in lending ("redlining"), criminal justice and incarceration, and social safety net eligibility; as well as implicitly discriminatory practices — such as fear of people of color, white flight from cities, hiring discrimination, and highway construction that contributed to segregating minority communities in urban locations — have succeeded in marginalizing minorities. Not only does segregation in urban areas make black communities more susceptible to police scrutiny, and therefore, to brutality, arrest and conviction, it also makes them more susceptible to chronic respiratory diseases and pollution-related death.

Combined with decentralized fiscal federalism, these practices have burdened minority communities with underfunded educational programs, disparate health outcomes, housing vulnerability, economic immobility and worse outcomes at all levels of the criminal justice system — and the problem of disenfranchisement exacerbates and is exacerbated by all of these.

"Being black in America should not be a death sentence," Mayor Jacob Frey of Minneapolis said in response to Floyd's murder. And yet, the high-profile killings of Floyd and Rayshard Brooks, who was shot in the back while running away from officers arresting him for being intoxicated, are not the only black people to have their breath taken from them as a result of unjust systems. COVID-19, the virus that debilitates one's respiratory system, is ravaging black communities — not least because of high rates of respiratory preconditions. As in previous public health crises, non-white communities experience the greatest risk and the worst outcomes in the COVID-19 pandemic.

Across the U.S., the percentage of people of color infected and dying of COVID-19 is significantly higher than their proportion of the population. Black Americans, for example, account for approximately 13% of the U.S. population, but represent almost one-quarter of U.S. deaths from the pandemic. This ratio is even more disproportionate in some locations: in Michigan, for example, more than 40% of those who have died from COVID-19 have been black, though black people make up only 14% of the state. These health disparities, shocking though they may seem, are not surprising to those who study race and public health.

In an unfortunate paradox, the same people who are most susceptible to COVID-19-related illness and death are also most vulnerable to economic crises. The economic hardship of stay-at-home orders will prove more devastating to people of color than whites due to income and wealth disparities. The wealth gap between whites and non-whites generated by centuries of discriminatory practices is vast. Blacks, for example, earn about 30% less than white people* for the same work and have about 12% of the net worth of whites — and these figures have not changed significantly since the 1960s. Minorities, who are least able to coast through this crisis on their savings, are most likely to lose their jobs. The wealth gap also means that minority populations will not recover as quickly as white communities. Pandemic relief efforts have perpetuated these inequities: for example, the CARES Act's Paycheck Protection Program actually favors white-owned businesses.

The COVID-19 pandemic has exposed the racial inequities that our society exploits, and which people of color have tried to bring to public consciousness. It is past time to acknowledge and correct the systemic injustices that have contributed to these inequalities. This is one reason to be wary of decisions to reopen states too soon — minorities and the poor are most likely to be sacrificed on the altar of the economy. The racial makeup of potential lives lost must be a factor in determining when states should reopen.

In this time of crisis and uncertainty, our nation has the opportunity — and the imperative — to use the critical lens provided by this pandemic to restructure our political and economic institutions as we listen to people of color define the most critical concerns. Though some of the recent protests have devolved into violent chaos, the legitimacy of the claims of the protesters is in no way diminished.

While most Catholics are aware of the responsibility to perform works of mercy, through which we engage directly with those in need, the duty to participate in the formation of just political and social structures is perhaps less acknowledged. However, the Catholic tradition holds that under the umbrella of charity, these duties are interrelated — they form the two feet of love, as the bishops say.

Working to develop just governments, institutions and social structures is not optional — it is an explicit directive of Catholic faith, equal to that which tells us to feed the hungry, visit the sick and imprisoned, and welcome the stranger in our personal lives. The Spirit-led dialogue that brought crowds to the church at the first Pentecost should define this moment, too: as the Spirit speaks through those who are oppressed, may we have the grace to listen.

For women religious, whose charisms offer "a transformative grace to the Church and the world," this moment is profound. The School Sisters of Notre Dame, Atlantic-Midwest Province, have begun a process of reflection and discernment to absorb the painful impact systemic racism and white privilege have had on their neighbors of color, and to wrestle with the profound personal and communal implications of this. As the SSND Directional Statement exhorts, "We discern as a congregation which urgent and critical global concerns we are called to address and we dare to respond boldly in unsuspected ways." Sr. Kay O'Connell captures this poignantly, alluding to G.M. Hopkins in her reflection:

We cry, "Black Lives Matter" with the impassioned crowds,

suddenly on a painful cutting edge with them.

A critical mass is gathering,

ready to heave us eons closer to our ideal nation.

I am quietly glad.

World broods with warm breast and with ah! bright wings."

*An earlier version of this blog post had an incorrect percentage on the wage gap between black people and white people.

[Kathleen Bonnette is the assistant director of the Office of Justice, Peace and Integrity of Creation with the School Sisters of Notre Dame, Atlantic-Midwest Province. She holds a doctorate of theology.]