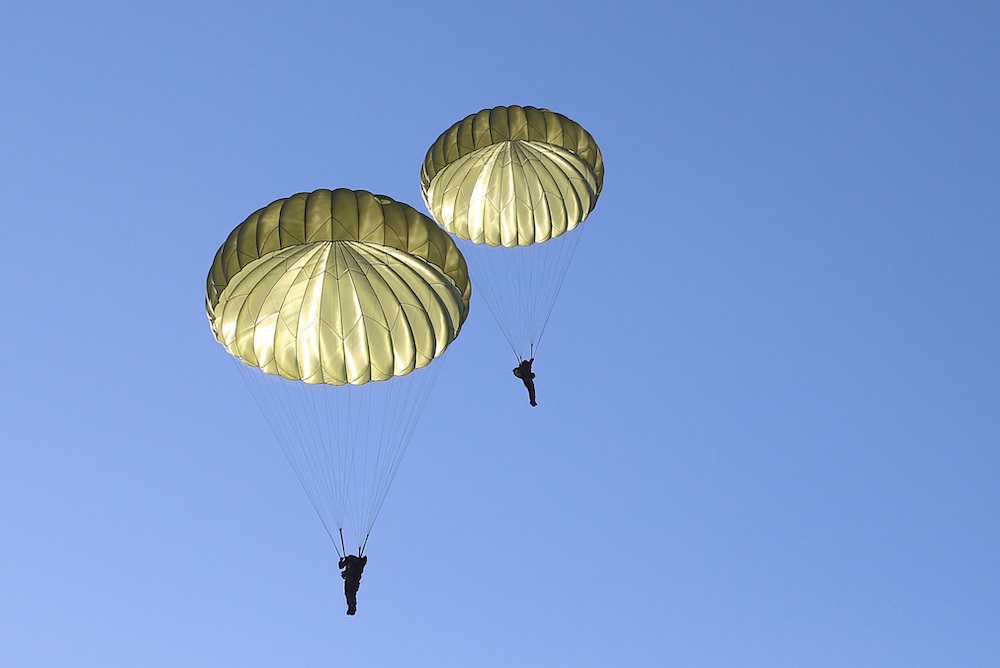 There is so much fear in letting go.

One time, many years ago, two of my older sisters went sky-diving. For Anne, it was not her first excursion with such an adventure, but for Lucy, it was. They were both in their 20s, and the thrill was both inviting and exhilarating.

As I remember the story, the training period went quite well, with all the necessary precautions attended, protocols rehearsed, and capabilities confirmed. Test the parachute pack, ensure the straps are locked, situate the goggles and helmet, crawl out onto the plane wing, wait for the signal, let go. The professionals will do the rest. Not so difficult a protocol when their feet were still on solid ground.

But then the plane took off, and the thrill and fear started competing. Since I wasn't present, I don't know first-hand what occurred up there in the sky, but this is my memory of the story. Inside the plane, everything was fine. Goggles, check; straps, check; parachute, check. Anne first — she crouched down, crawled out onto the plane wing on all fours, took a deep breath, heard the instructor say, "Now!" and let go. Her parachute was engaged when she cleared the plane, and she gracefully began her float through the air.

And then, as I recall the story, the instructor pried my sister's fingers one at a time off the plane's wing as she leaned into the fall and dropped into midair. There was free fall, but then the parachute opened, just as promised, tugging her lightly into buoyancy, and within a few minutes, she was back on terra firma safe and sound with the experience of a lifetime and a story to match.

When I double-checked this decades-old memory of mine against the actual history from my two older sisters, they both corrected me significantly (what else are big sisters for anyway?). In fact, Anne did not go first as the big sister mentor, showing Lucy the ropes. Lucy volunteered to go first, and rather than cling to the wing, she didn't even wait for the instructor to give the OK; she just let go immediately — and somewhat prematurely. In her own words: "No one had to pry my fingers off anything … and it was the single most quiet, peaceful and free experience of my life."

Anne's response to this abrupt departure from the plane, as she tells the story, was that her "big sister protector" kicked into gear and she jumped out equally abruptly to make sure Lucy was OK, erroneously landing herself in a not-quite-the-desired-landing-destination field of soybeans. (I do wonder how Anne had hoped to make things right if indeed Lucy had been in trouble …)

Now, one might call my story "fake news" and the actual event the only experience worth relating. I beg to differ. I find the discrepancies illuminating. Fear is a construct. It might be real in the personal experience and in the actual effects, but in the end, fear is constructed out of our own minds, hearts, and realities.

That emperor has no clothes — and maybe that is the reason Jesus was so often telling his disciples not to be afraid. I remembered Lucy being afraid of letting go, but that fear simply didn't exist — at least not in the quality that it had in my own mind. In reality, even if she had been afraid to let go of that wing, she chose to act not out of fear but right through it, shattering it along the way and breaking through to the other side — absolute beauty. And Anne? Any fear she might have been experiencing for herself was obliterated in the face of love. "Perfect love casts out fear" (1 John 4:18). Yes; yes, it does.

Recently, a global pandemic has demanded that we let go of so much — cherished experiences, annual encounters, anticipated plans, employment and financial certainties, even loved ones. Racial tensions, law enforcement crises and politics have forced us to let go of willful inattention and naïve presuppositions. Natural disasters from coast to coast remind us that our livelihoods, our prospects, even our very backyards may need to be surrendered to the unknown and the threatening. We are asked to let go of our comfort (wear a mask!), our preferences (how about a backyard wedding instead?), and some of our favorites (no season tickets this year). All in all, our "letting go's" are pretty mild compared to the letting go practiced daily by our brothers and sisters experiencing injustice, hunger, war, illness, homelessness or violence on a daily basis.

So, the question: how hard is it, really, to let go? When I was focused on why it was so hard for Lucy to let go of the plane wing (which would have been understandable — and certainly would have been my experience), I completely lost the actual reality of fact: that Lucy experienced no difficulty whatsoever in letting go. "Letting go" in and of itself need not be fearful; the only power fear has is that which we grant it. My memory gave fear the victory, but that was a lie. A very believable lie, but a lie. The truth is that Lucy wasn't focused on fear; she was focused on freedom.

The spiritual parallels are personal. Both my sisters Anne and Lucy (who apparently have an easier time letting go than I do) experienced freedom, peace and exquisite beauty when they stepped out and simply let go, seeming not to struggle much at all with what was required in the surrender. I have a harder time with the idea of letting go, it seems. I have learned that when we have something in our lives that we want to let go of, that we have decided to let go of, that we are ready to let go of, rather than asking, "How do I do this?" maybe we could ask, "How will the free fall free me?"

There is so much fear in letting go. Or is there? It depends on who's telling the story, I guess.

Let go, dear friend. Whatever it is that binds you today, let go. God will be with you in every moment, confirming your readiness, providing beauty and peace, and waiting for you in the bean field if necessary.