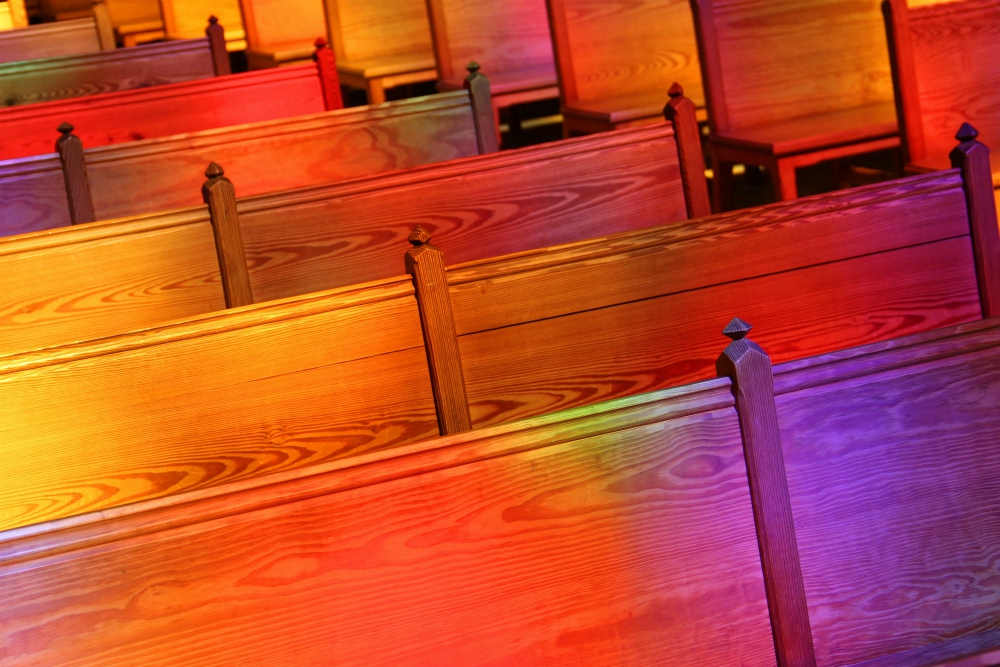 The other day when I was at Mass, a family of six was sitting in front of me. The youngest child was a girl who looked to be somewhere between 3 and 4 years old, and she is the subject of today's reflection.

She did so well during the first part of Mass, quietly paging through the missalette, standing and sitting at appropriate times, and whispering gently into her mother's ear when she saw something interesting. Halfway through the second reading, however, she started to approach the line of demarcation.

Her page-turning evolved into loudly slamming the hymnal and throwing her head back in gurgly squeals when she would make eye contact with a fellow worshiper. Her attentive standing and sitting evolved into contortions of truly impressive proportion given the confined space between kneeler and bench. Her whispering turned into whiny pleas for pancakes and less scratchy clothes. She approached the boundary line of sufficient decorum and proceeded right past it.

Her father took her in his arms to remove her from the church, only to elicit shrieks and gyrations of protest. With a threat that only the girl could hear, he replaced her in the pew where she sullenly pouted with furrowed brow and crossed arms.

Big brother tried to appease the foul mood by giving her his hymnal. No go. Mom tried to coax her onto her lap for the homily. Absolutely not. She wriggled her way to the end of the pew and proceeded to make a fort of the family coats, far removed from any traitor of her bloodline.

By the prayers of the faithful, she was sound asleep inside that self-made coat fort, lulled to slumber by the warmth, the struggle, or the homily, we know not which.

The sign of peace awakened her enough to make her sit up and reach for her dad. He obliged and as soon as she was in his grasp, she tucked in and continued her nap from that safe haven. Up to Communion he went, back from Communion he came, up for the final blessing, and singing full-throated the final hymn. Through it all, she slept, safe and sound, without a care in the world, right where she belonged, fully trusting.

How like this we are in the arms of God. I know the father image of God is fraught with difficulty for some, but in being witness to the entire drama that played out in the pew right in front of me last weekend, so many things clicked. Isn't it true: We can start off in our relationship with God so "well." We follow the rules, we get with the program, we are polite and appropriate and proud to show up bright and shiny in our Sunday best.

But then, things get a little tedious ... or maybe they get a little real. We get cranky or impatient or stubborn or bored. A little more attention, please, God. We try to force the issue, turning our pleas into demands, bargaining with God about our good behavior and the response that it "should" evoke.

Then, when God seems either oblivious to our needs or seemingly opting to ignore them, we can work ourselves into some pretty impressive spiritual contortions trying to get our way. We can throw tantrums, make promises and pledges, and provide airtight cases as we advocate that "my will be done" even as we pray "thy will be done."

If God's answer to our antics is "no," then it is sadly true that we can sometimes pout, refuse overtures of kindness from others, and even end up punishing ourselves in isolation.

Then maybe, if we are lucky, after much struggle and fight, we eventually find ourselves worn out and just give up. And that is when God can pick us up, limp and weary, to hold us and carry us, safe and sound, to where we were meant to go in the first place. Regardless of my consciousness, I am safe in God's arms, held and carried — home.

As I watched the three older brothers who lived farther down the pew, I noticed that they, too, were diligent in their attentiveness to their little sister. Theirs was not the responsibility for caretaking, but that was their sister, and what happened to her mattered to them — particularly in her relationship with their parents.

With all that is going on in our world right now — the wars and assassinations, the droughts and wildfires, the vitriol and hatred, the incarcerations and border separations (to mention but a very few) — we would all do well to sit behind a family of six in church. We might just learn what it means to live together, to watch out for each other and care for each other's well-being, to form a family gathered together in the name of community and communion, enveloped in the word and body of Christ, and held tightly by our Father who knows what we need well before we ever ask for it.

At the end of Mass on Sunday as I was leaving, the mother in front of me apologized profusely for the bother they certainly must have been to my prayer. It took absolutely no effort on my part at all to respond rather instinctively: "Oh, be assured: you were my prayer today." Thank you, Family of Six.