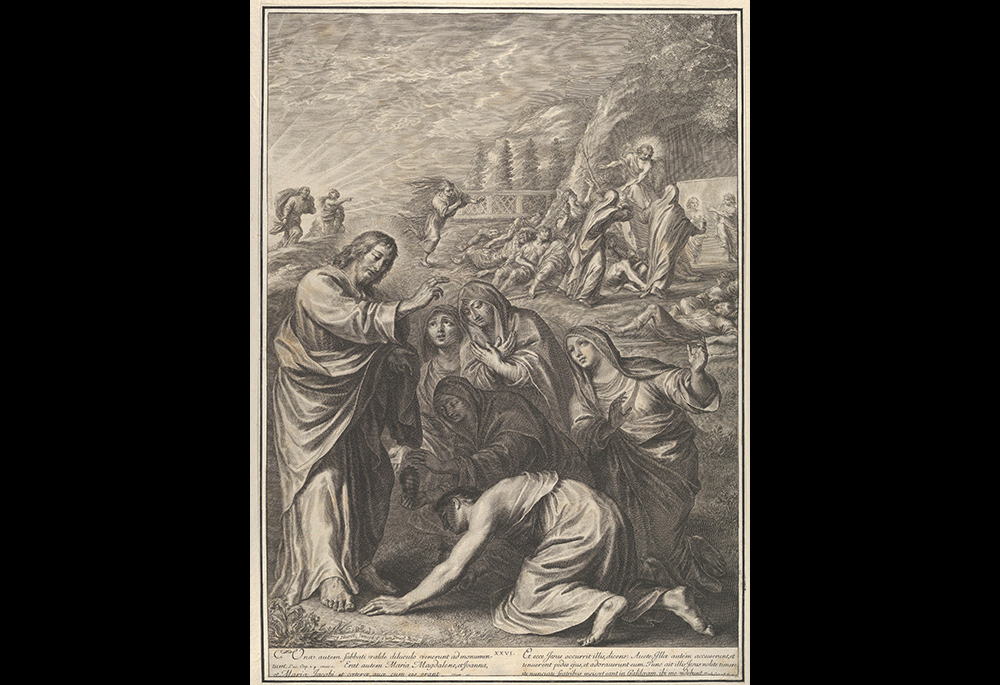 "The Holy Women at Christ's Tomb, from The Passion of Christ, Plate 20," a 1664 engraving by Grégoire Huret (Metropolitan Museum of Art)

We've all been talking a lot about synodality. But I've been reflecting whether the church has been journeying over the centuries in the right direction, according to God's will. The disciples had been instructed to meet him after the resurrection in Galilee (Matthew 28:7; Mark 16:7). That's where he had begun his public ministry and where they had first encountered him and been evangelized.

However, later generations of Christians took an "ideological" turn towards Jerusalem by ritually commemorating the paschal mystery and building permanent structures around the altar. Instead, why didn't they go first towards the world in service and then come back to offer eucharistein or thanksgiving?

I also wonder whether declining attendance for Mass, around the world, is because of increasing secularization, or a sign of people leaving and walking hopelessly on the road to Emmaus before they recognize our Lord someday at the breaking of the bread (Luke 24:13-35).

The sensus fidelium, or sense of the faithful, seems to be calling for a paradigm shift in the ideological and theological center of worship from Jerusalem to Galilee. What if the presence of Jesus in the poor and marginalized were prioritized over the Liturgy?

If the followers of Christ weren't centered around the Eucharist celebrated in church buildings, maybe clericalism and hierarchism wouldn't exist. Maybe there wouldn't be controversies like the German synodal path, feminist movements asking for the ordination of women, and other forms of lay activism in the church today.

In the Gospel account of the Johannine community which, according to some scholars, may have been founded by a woman, the institution of the Eucharist is missing, but the washing of the feet (John 13:1-15) and the new commandment (John 13:33-35) are elaborated. The narratives are infused through and through with concretely "lived" eucharistic spirituality, though! They present a spiritually deeper and matured understanding of sacramentality (John 6:1-14, 25-59).

Perhaps women in the early church discerned and decided to change the center of their livwa and ministry from the commemoration of Jesus' sacrifice at the altar to Jesus who suffers in the poor and marginalized. They remembered the message of the angel near the empty tomb: "Then go quickly and tell his disciples, 'He has been raised from the dead, and indeed he is going ahead of you to Galilee; there you will see him' (Matthew 28:5-7)."

By the fourth century, during the Constantine reign, some Christians were disappointed with the institutionalization of their deeply cherished faith. The breaking of the bread was shifted from house churches belonging mainly to women (Philemon 1:2; 1Corinthians 16:19) to huge church buildings where it was ritualized. Women's ministries seemed to diminish.

All this had great impact on those who were serious about their sequela Christi or following of Christ, as they felt the faith had been compromised and watered down to avoid persecution.

These disciples connected such developments to the temptations of Jesus in the desert (Luke 4:1-14), which could be overcome by leading an evangelical life. Hence, some of them moved to the desert to live as hermits before the monastic movement began.

Well, if Jesus were present in the poor and marginalized, and they wanted to live the Gospel more seriously, why did they opt for solitude and separation from the world? Jesus never intended his followers to live in geographical deserts permanently. They were meant only for retreats. So, were they influenced by Buddhist monastics?

Studying the anthropology of religion could throw some light on the ritualization of sacraments and the institutionalization of Christianity into a religion with its own identity, distinct from Judaism. It could also help us understand the emergence of monasticism and religious life in various religions, characterized by varying degrees of separation from the world.

Nevertheless, the Bible reveals Jesus' intention to send his disciples to the world even though they do not belong to the world and are hated by the world. No doubt monasticism as a life of prayer has contributed immensely to the Christian faith — but Jesus wanted all his followers to be completely one (John 17:9-26). Perhaps he did not desire a church (kind of) divided into members who live in the world and members who separate themselves from the world.

In today's world, the COVID-19 pandemic with social distancing, lockdowns, and closure of churches around the globe made me reflect whether Catholics are being called to have a deeper relationship with God without being ritualistic. And yet, this doesn't imply taking an ideological turn to the desert.

Were the disciples instructed to meet Jesus after the resurrection in Jerusalem, Galilee, or the desert? Journeying towards the ideological Jerusalem or the desert seem to signify two extremes. Has the church lost its way?