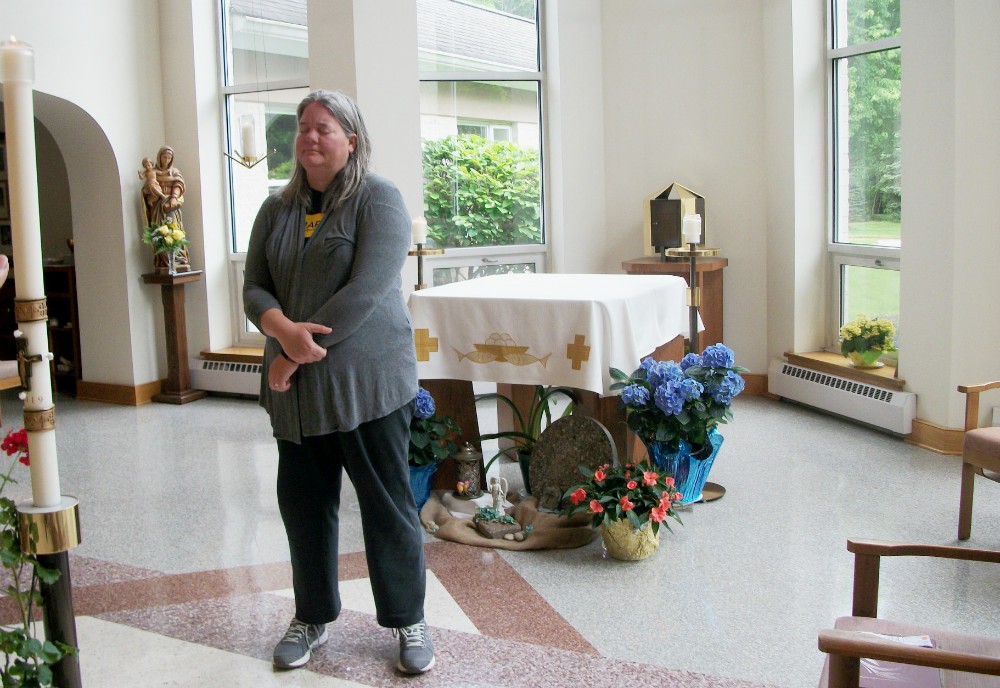 Julie McElmurry receives a blessing at the Poor Clare Monastery in Chesterfield, New Jersey, on her last day filming there in May 2019. (Courtesy of Julie McElmurry)

When she set out to make a series of documentary films about monastic life, Julie McElmurry knew she wanted to portray sisters differently, not as if they're part of a nature documentary, the camera peering distantly through a window. Instead, she wanted to "go through their front door and into their individual lives."

With a particular interest in Franciscan spirituality, McElmurry has shot seven films and interviewed up to 40 sisters (many of whom are Poor Clares), and she intends to round this series out to 10 movies devoted to monastic sisters.

"I'm not a scholar of film, but we all know women are usually portrayed in a really sexist way in movies, and so we really see that with how nuns are depicted," McElmurry said. "In fiction movies, it seems like they're only portrayed as violent or ignorant about the world or a sex fiend, and I think those are the three ways that women are usually depicted in big and small ways in movies.

"It's very rare to see a nun in a fiction movie who actually is normal and intelligent," she said. 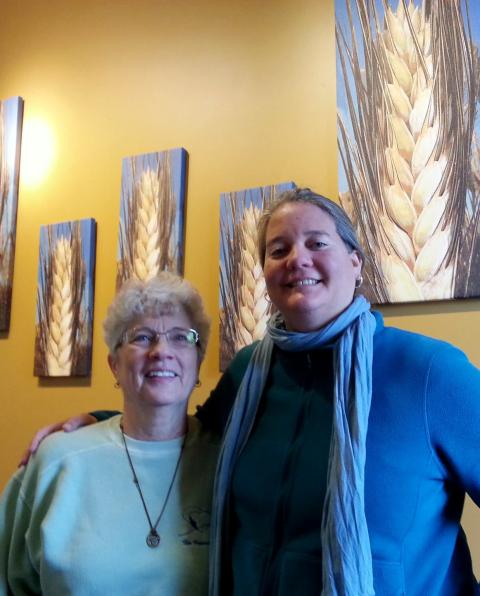 After conducting her first interview ever, Julie McElmurry, right, poses with Ann Wiesen, a Franciscan Sister of Our Lady of Perpetual Help in Tampa, Florida. "I had to balance my camcorder on a box because I did not have a tripod. She was very kind and patient and told me great stories of her life as a nursing teacher," McElmurry said. (Courtesy of Julie McElmurry)

Though McElmurry had little experience in filmmaking, she sought to shed this two-dimensional image of sisters. She got a $1,000 grant through National Catholic Sisters Week, funded by the Conrad N. Hilton Foundation (which also funds Global Sisters Report), and taught herself how to make a documentary, literally Googling "how to make a documentary."

She received the grant four years in a row and finished her most recent film in January. (The grant is no longer available, she said.) All of her films are available for free on her website.

"Even though it was kind of my whole reason for going into it, I was still surprised by everyone's individuality," McElmurry said. "Everyone in the community might be wearing a habit, and everyone in the community lives by a schedule, but even within that, there's this Franciscan concept of: We are uniquely loved and uniquely formed, and God loves us for who we are as individuals."

Since then, she's founded the Charlotte Unconventional Film School in North Carolina, where she lives. And though the focus isn't to teach students how to make vocation material specifically, McElmurry said she hopes students who have a friendly relationship with a religious community feel inspired to "capture, preserve and share the stories so that other people see the whole picture."

"I appreciate people trusting me when there's a camera right there and being very willing to talk about deep stuff and sad stuff and all sorts of things that allow people to know the bigger picture of what monastic life is," she said.

"It's not just a brochure or looking at pictures of a building. The monastery is the place where this life happens, but the life is happening in each individual person that is there."

GSR: Tell me a little bit about your previous experience in film.

McElmurry: I got a camera in 2014. A community of sisters asked me to make a video for them, asking people what they know about St. Francis of Assisi, like a person-on-the-street-type interview. I used the free editing software on my computer and spliced that together into a little video. I made maybe three or four small videos over the next year, just getting to learn how to use this camera.

Between January and mid-March [2016], I learned a heck of a lot. I interviewed about 12 women in Florida; Philadelphia, Pennsylvania; and Honolulu, Hawaii. I got a better editing program. As I sat down to edit all that footage, never having had so much footage to edit in my life, I was really asking God to help me with this because the whole process was way more challenging than anything I'd ever done before related to making videos. I realized I actually had two separate movies in front of me, and within a few months, I had my second movie.

Did you already have a relationship with sisters?

I was a campus minister [alongside Conventual Franciscan Friars] from 1999 until 2010 in North Carolina, and during that time, I lived between a convent and a priory for three years. So, I really got to know the Sisters of St. Joseph of Philadelphia, who lived next to me, and also a Sister of St. Francis of Philadelphia near Aston, Pennsylvania.

I got to know them as people. With one of them, I'd go over and have a special knock on the window and she come let me in, and we'd watch "Jeopardy" and eat cereal.

I went to graduate school during the summers in between being a campus minister, first at Fordham University and then St. Bonaventure University. I spent five summers at St. Bonaventure, and my roommates were Felician sisters. All my friends were three laypeople and, like, 90 religious.

So many times, I found myself sitting around a table, and people would be telling amazing, usually very funny stories. And I kind of realized that not a lot of people get to hear these stories. So, when I went into making the first documentary, I thought it was going to be people talking about other people that they knew, but I found it much more interesting to talk to people about their own life in ministry.

Tell me more about your frustrations with how sisters are depicted in media and how you were deliberate in approaching it differently.

When it comes to nonfiction stuff, it's like watching a nature documentary, where the camera is really far away and maybe you see somebody scrubbing the floor or praying, but it's like we're peering through the trees at this wild animal that's out there, doing this activity. 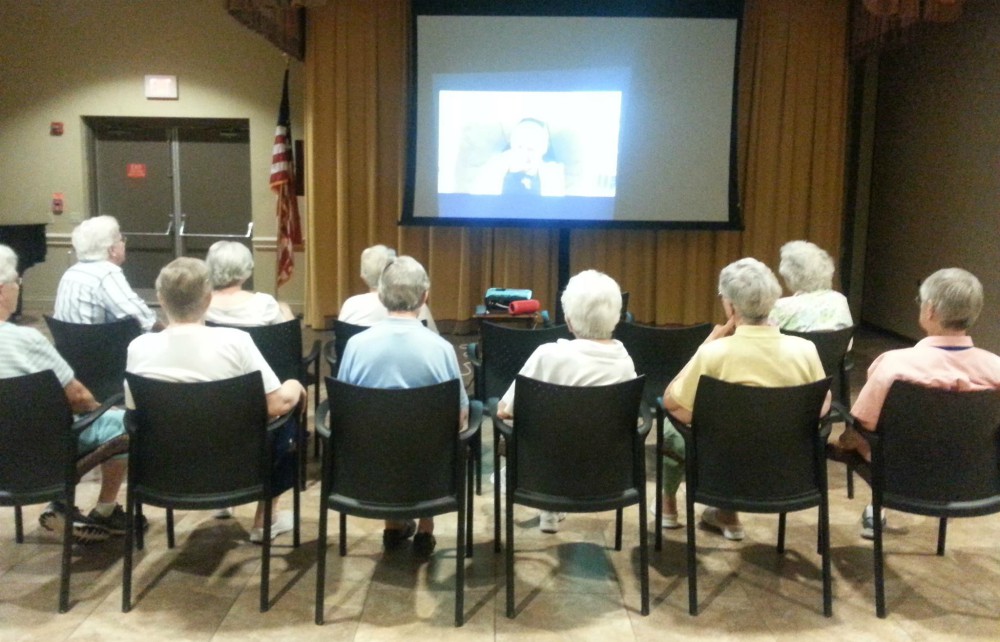 A June 2016 movie screening in Philadelphia. Four of the Grey Nuns attending this premiere were also featured in the movie, "Energy of Nuns." (Courtesy of Julie McElmurry)

It takes a lot to build a relationship to make a documentary, and I think that is what's lacking. Maybe people think they need a huge crew, and that can be really disruptive and intimidating. Maybe people don't realize that the relationship is the most important aspect of all of this, and that means respecting their space, giving them room to talk. I have opinions about things I would like to do, but I know I'm a guest in their space, so I'm not going to them after 8 p.m. if that's what they're asking.

I wanted to reflect my experience of women religious, which is that they're some of the smartest, most well-read, intelligent people I've ever met. Often, there's a great sense of humor, and so I want to make sure other people see that they're interesting, funny people. And each monastery isn't cookie-cutter; they all have their own culture and ways that they've come about. I wanted to depict that different flavor that each of them has.

With the New Jersey movie, I really wanted to convey the fact that this is not just floating in space; this exists in New Jersey. So, I was very happy that there were really great New Jersey accents among the people I interviewed. It gave it a distinct sense of place. I want people who live in that area who might have no idea this monastery is there to realize, "This is part of our community."

What would you say the documentaries are about?

It's a slice of life, where you get a sense of the daily schedule and what prayer means to them. I was going to say it's like opening a window and looking in, but it's really like going through the door and spending a day there where you see that it's not at all bleak. A lot of movies like to make monasteries look like these really dark, damp, depressing places where people are just like robots or something.

This is the next best thing to actually being able to go, look around and to know the sisters.

Give me an example of how the sisters or the monastic lifestyles were so different from one another.

One sister in New Jersey, a former lawyer, didn't join until she was in her 50s. She had a whole life; she has kids and grandkids. People who only have this model of religious life that came from watching movies — I think it would really surprise them to learn that she had to talk to her kids and her mother about being called to this life, and what does this mean to our family? It looks really different when you're in your 50s talking to your grown children and your elderly mom about this.

What have you personally learned through this project, whether about prayer life or about sisters?

[It amazed me] that everyone can figure out how to live together under one roof, being a lot of different personalities. Even within a schedule and, from the outside looking in, uniformity and sameness, people come from different backgrounds, people spend their leisure time in different ways, people speak different languages, people have their own network of relationships of friends and family, people that they write letters to, people who come to visit them.

It's given me a greater appreciation for how different people with their own perceptions and ways to do life are able to live in this way where there is a lot of conformity to it, but it doesn't mean that they have to completely shed everything about who they are. They stepped into this way of doing things, but they're still who they are, and yet always looking to be transformed and grow.