Hundreds of protesters took part in a rally and march in Washington Aug. 28 chanting: "Not one more! Not one more!" to urge President Barack Obama to stop the deportation of immigrant families, workers and children.

The participants, including many young children, also got their message across holding aloft placards saying: "Don't deport my dad" and wearing T-shirts with the words: "Keep families together."

"We're here because the president must act and he must act now," one of the rally speakers said over a bullhorn to a cheering crowd erupting into shouts of "Si, se puede" ("Yes we can") – a motto of United Farm Workers and a slogan of Obama's 2008 presidential campaign.

The gathering started at the U.S. Immigration and Customs Enforcement headquarters, just a few blocks from the National Mall, while police officers stood watching and office workers looked out their windows. Participants then walked several blocks to the White House, chanting slogans in Spanish that translated to "Obama, listen, we're in this together."

"We're here fighting to stop deportation," said rally participant Rene Santos, originally from El Salvador. "We came here to work and feed our families. We are not criminals," he told Catholic News Service through an interpreter.

A woman from Bolivia said she came to the rally because she has been waiting for six years for her mom to "get her papers" securing her legal immigration.

"My brother wants to come; it's not easy," she said.

Mercy Sr. Anne Curtis, joined by a group of women religious, stressed the sisters' long-term commitment in working with immigrant families and trying to secure a just immigration reform.

"We're concerned about families that are separated and what happens to these women and children," she told CNS on the sidewalk where crowds were forming alongside a row of food trucks.

"We need to stop the deportation of mothers and children and not warehouse them," she added, noting that faith-based communities can find alternative ways to help.

She also said she hoped Catholic members of Congress, no matter their political party, would respond to the needs of immigrants "out of tradition of their faith."

The Rev. Paul Lee, a Lutheran minister who teaches at the Elliott School of International Affairs at George Washington University, said the need for immigration reform is a concern to the church as a whole.

He said he attended the rally because he was "frustrated at the lack of immigration reform" efforts by Congress.

Lee, who has worked with asylum seekers from Ethiopia, said he cannot understand why the United States does not offer similar refuge to people from Guatemala, El Salvador and Honduras.

"I've worked in those countries," he told CNS. "Fear of persecution is very much a reality."

"We have to protect that right. This country has always been a refuge," he added.

He also noted that he sees Pope Francis as a sign of unity in the church and believed that if he were in this country now, "he'd be right here" at the rally.

The White House has said that since Congress has failed to pass a comprehensive immigration reform bill or the supplemental funding Obama requested to handle the surge of unaccompanied minors and families crossing the border this year, the president would announce executive actions to address some aspects of the problems.

As summer draws to a close, immigration law experts have been weighing in on what some of those actions might include.

In an Aug. 26 teleconference, attorneys including the former general counsels of government immigration services laid out what they consider some of the likely actions Obama can take and how those square with the boundaries of presidential authority.

The Deferred Action for Childhood Arrivals, or DACA, program is just one example of how presidents have opted to use prosecutorial discretion, he noted.

"Another way to look at it is the whole concept of the immigration code, as written by Congress, gives the executive branch pretty unfettered discretion in many areas," Leopold said.

Stephen Legomsky, former chief counsel of USCIS, now a professor at Washington University School of Law, said the funding priorities of Congress give the president the necessary legal authority.

"When Congress knowingly only gives the Department of Homeland Security enough resources to go after a tiny percentage of the undocumented population, Congress gives the president authority to prioritize" how to spend those resources, he said.

He also could expand how the administration uses its authority to grant humanitarian parole, now used sparingly, to wider populations, she said.

Rodriguez cautioned that "a decision to halt all deportations would likely extend beyond his authority," because there are some financial resources to continue deportations.

[Patricia Zapor contributed to this story.] 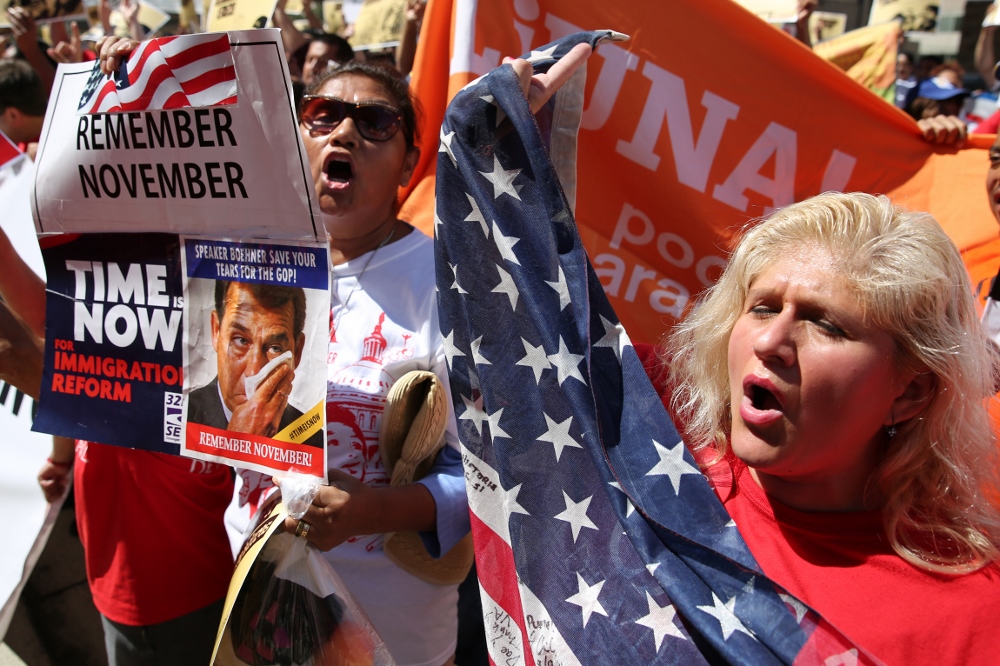