Q & A with Sr. Maria Cimperman, director of Center for Consecrated Life 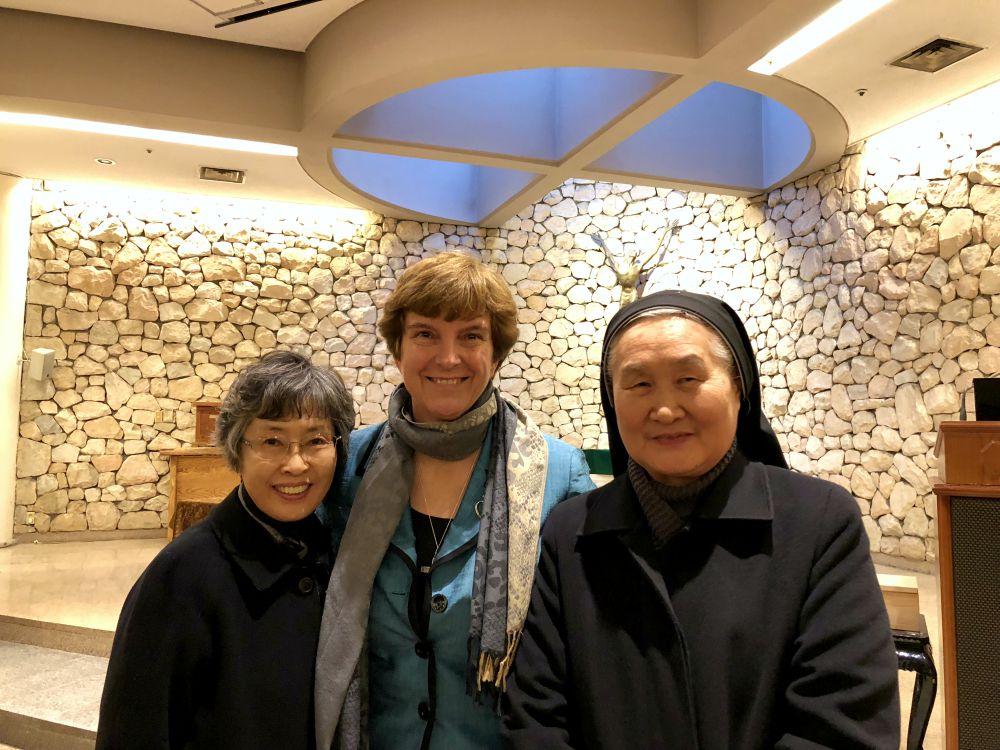 In February 2018, Sr. Maria Cimperman, center, offered an afternoon presentation to the religious of Korea in Seoul. After the presentation, there was a lot of dialogue on the contexts, calls and invitations encountering religious life today, in Korea and across the globe. (Kim Young-Ae)

Sr. Maria Cimperman's passion for international and intercultural aspects of religious life was sparked early in her life by a tragedy that also became an inspiration. She was at a Catholic high school in 1980 in Cleveland Heights, Ohio, run by the Ursuline Sisters when news broke that Sr. Dorothy Kazel and her missionary companions were murdered in El Salvador. Kazel left the school five years before Cimperman entered, but the faculty all knew her.

From that tragedy, added to by the women's aid to Salvadorans during a civil war, "my awareness of social justice came forth," Cimperman said. Classes that examined the U.S. role in the bloody conflicts in Central America deepened that awareness. "What struck me the most about Dorothy Kazel and the others is that they were there to love, not counting the cost. That's my image of religious life — to love, not counting the cost." She has been to El Salvador twice, including for the 20th anniversary commemoration of the murder of Kazel and three other churchwomen.

Cimperman's own path in religious life took her to graduate school, first to Notre Dame for a master's degree in divinity, then to Weston Jesuit School of Theology for a licentiate of sacred theology, and to Boston College for a doctorate in theological ethics. Her work is at the crossroads of social ethics, moral theology and spirituality, reflected in the books she's written, including When God's People Have HIV/AIDS: An Approach to Ethics and Social Analysis for the 21st Century: Faith and Action Toward a Socially Conscious Spirituality. She's just finished another book, Religious Life For the 21st Century: Creating Communities of Hope on a Global Scale, scheduled for publication late this year or early 2020.

She credits theologian Sr. Sandra Schneiders as being instrumental in her own career and growth in religious life. Schneiders told her about Giving Voice, the organization of young women religious, for which Cimperman served on the core team for several years. Cimperman came to Catholic Theological Union in the fall of 2012 and was a visiting associate professor for the next two years. A sister with the Religious of the Sacred Heart of Jesus, she was named director of the newly formed Center for the Study of Consecrated Life at Catholic Theological Union in Chicago in the fall of 2014.

It was an incredible opportunity, Cimperman said, to start something new just as Pope Francis declared the Year of Consecrated Life. The Conrad N. Hilton Foundation (which also funds Global Sisters Report) provided a start-up grant for the center, which also attracted funding from various religious communities.

GSR: What was your reaction to being named director of the center?

Cimperman: It was an amazing connection and bridging of two areas of my life — my work in social ethics and religious life. It was an opportunity to bring those worlds together in one institution. We started with nothing — no website, no program. There was the delight of creating something new at the same time Pope Francis named the year of consecrated life. That first year [of the center] was to wake up the world and wake up religious life. There's a lot of things happening and there's a lot of things going on. We held "listening sessions" with students — they wanted conversation and "could you do it over a meal?" We did one series, "Compelling Conversations for Today," where over a whole meal were discussions on community, paschal mystery of religions (dying into new life) interculturality and the cry of the poor. The theologians had five minutes to begin to address those topics and then sat at the tables and listened — they didn't speak anymore. That was in April 2015 and then in September, the theologians came back at the beginning of the next school year, their theological engagement [reflected] what they had been hearing.

What do you see as the major accomplishments and findings since you became director of the Center for the Study of Consecrated Life?

The point of the center is to engage the contemporary issues and to do it from a global lens. The global is so key. Our vision can get small looking down the street, but if we look at the calls of the world — our sisters in Venezuela, India, the Congo and El Paso [Texas] — that can inform, form and shape our responses today. We are called to an interior conversion, an internal transformation and an external vitalization in religious life today.

[At the center] we are engaging the questions needed for today. We've brought in international speakers to represent the gifts and diversity of the church: Fr. Timothy Radcliffe, former Master of the Order of Preachers (Dominicans) Sr. Pat Murray, executive secretary of the International Union of Superiors General; theologian Fr. Agbonkhianmeghe E. Orobator (originally from Nigeria) and Sr. Maricarmen Bracamontes from Mexico. We brought in some members of Focolare, a lay movement to build unity in the church. I kept asking — what is the edge and its interculturality — we were ahead of the curve that everyone is now working on. 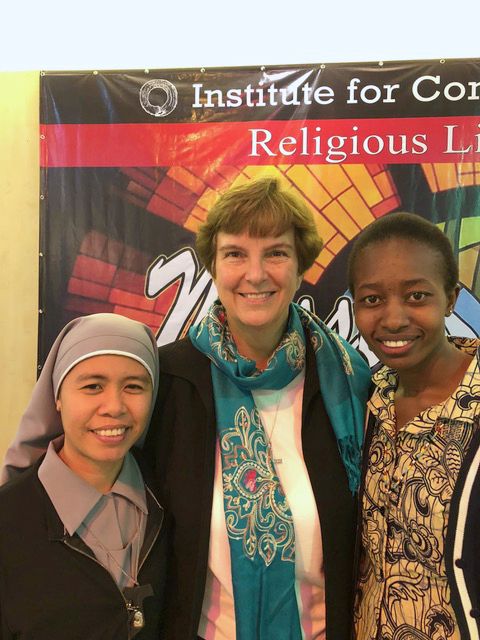 Sr. Maria Cimperman with two participants of the Institute of Consecrated Life Conference in Manila, Philippines, in January 2018 (Provided photo)

One key program the center created is "Engaging Our Diversity — Interculturality and Consecrated Life." Can you explain more about this program?

This is a 30-month "train the trainer" program that included two conferences. Most participants stayed the same, but some changed because positions within the congregation changed. Twenty-one congregations are still part of it, and they come as 20 teams because one community has women and men — too small to do alone so they came together. It's 25 percent men, 75 percent women. Half of the participants self-identified as being from the non-dominant culture of their province or congregation.

What were key findings when the participants reconvened for the "Engaging Our Diversity" session in November 2018?

How much across the board we have to address race and culture. This year, we did some presentations engaging that, and people soaked in the opportunities. There is so much calling in this. … It's huge. The value of the theological lens in this is not just "you should do this" [engage interculturality] but how it truly is part of the Emmaus call, the walking as we hear the gift of the other and helping us see differently. Skill building goes along side it. We had a session about different cultural ways of dealing with conflict. It was an exercise where people had a series of questions to answer on "what is my dominant way of addressing conflict?" It was to understand their dominant way of addressing conflict, and others' way of addressing conflict and then have conversations about this: How do we then walk through this conflict?

What surprised you about this particular program?

How Scripture is replete with the possibilities for interculturality — the story of the Syrophoenician woman who asked Jesus if he would heal her daughter. It's been a deepening for me.

What major goals do you still want to accomplish at the center?

What we're embarking on this year is strategic planning — what is our call now? We are an academic institution; we're theologians, so how do we bring the lens of theologians to these calls? On interculturality — to complete what we're doing and see what's next. One goal is to publish two books. One will include the major addresses of our two conferences and one or two related essays. The second will be about best practices from "Engaging Our Diversity: Interculturality and Consecrated Life," what the groups learn from each other. We also want to look at vows, what is needed for this time.

What is next for you personally?

I'd love to do more work on communal discernment: How do we do this in light of our charisms? Decision-making is the end result. The other area of interest is peace-building; there's not enough about the role of women in peace-building.

Participants in the "Engaging Our Diversity — Interculturality and Consecrated Life" program, in November 2018 (Ronald Brown)

How do you keep your own passion for international and intercultural aspects of religious life strong?

Through my teaching and engaging across cultures and continents. Our CTU students come from over 40 countries and across the U.S. and, whether I'm teaching Catholic social thought or religious life courses, there are constant opportunities to bring in experience and knowledge from students' experiences. The opportunity to present in various parts of the U.S. and world and across congregations offers great spaces to learn from what is emerging in religious life all over. I hope this is what then I bring to teaching, writing, presenting and conversations. I spent three weeks, for example, in the Philippines in January 2018. Before doing any presenting, I had the gift of traveling for five days in a northern region of the country and meeting prophets — yes, prophets! People who announce the good news and denounce injustice. Then, when I presented at an international conference in Manila [at the Institute of Consecrated Life in Asia], all my examples changed to include what I learned in those days. After this, I offered a five-day course on religious life, and my experience teaching students across the globe helped me to find ways to better offer what could be of use to the 150 participants and to help bring forth the voices and wisdom already present in the group.

Q&As | Q & A with Sr. Maria Cimperman, director of Center for Consecrated Life