I was leading the ninth annual Women’s Wilderness Camping Retreat in the Santa Fe National Forest when the papal encyclical, “Laudato Si’, on Care for Our Common Home,”was released. It has been three years since we have retreated in this amazing place of forest, meadows and streams. After a fire in 2013 the forest was closed because of threats of flash floods.

Scars from the fire and vast erosion from monsoon rains are evident everywhere. In this place, the encyclical is enfleshed.  The land and communities surrounding them speak of the realities of fire and extreme weather exacerbated by climate change in New Mexico. Creation and people’s livelihoods are affected.

I traveled to the small town of Pecos, about 30 minutes down a road that is almost washed out as the result of fires and rains. One small restaurant boasts of an intermittent Internet connection that allows me to download the encyclical and do some work for New Mexico Interfaith Power and Light around the encyclical.

While my hopes were for a document that could both inspire and call us to deeper action, my initial reading fills my poetic heart and activist soul with great gratitude. I am moved and pray a prayer of thanks for a call that encompasses “every person on the planet.”

As a Franciscan, I see the imperative to approach nature and the environment with an “openness to awe and wonder,” which are essential to living “intimately united with all that exists,” that forms a foundation of the document. Between the words is the witness of St. Francis and St. Clare to live simply and rooted in joy and wonder.

The opening paragraphs are essential foundations of the document:  that it is necessary to hear and answer the call to address current political and economic systems in need of reform. Reform on a personal, societal and countrywide scale is required in order to live in a stance that is “a refusal to turn reality into an object simply to be used and controlled.”

Prepared to be given a bird’s eye view of the concerns of environmental devastation, climate change, poverty and structures that create our ongoing dilemma, I am surprised to be given an eagle’s eye view of our reality that is sharp and in places so specific it causes discomfort. There are many invitations to conversion, a very Franciscan virtue.

Laudato Si’ begins to sing through me like the ancient Canticle of Creation by St. Francis of Assisi. My organizer’s mind imagines how this document can be of service. Laudato Si’ can add a moral perspective to a number of issues including:  the Clean Power Plan  the EPA will give to states in August; the Congressional appropriation of money for the Green Climate Fund  to assist our brothers and sisters who are economically challenged and affected most by climate change; the mobilization of people of faith and conscience to raise a moral and ethical imperative for world leaders to agree upon a binding global treaty on climate change in Paris at the end of the year. (See IPL Paris Pledge to lend your voice.)

My head reels as I drive the windy road back to the retreat. Over dinner, after a day of solitude in the forest, the women are anxious to hear about the encyclical. When I report that it is a beautiful and commanding document in which the pope says, “I wish to address every person living on this planet,” they are all overjoyed to be included in the call of the encyclical.

These women are Mennonites, Catholics, “former Catholics,” Buddhists, some espousing no religion and one young woman who says she has come to know her religion as Love and being a loving person. They, as many of the interfaith people I work with, are in love with creation and their brothers and sisters and the future generations. They are very concerned about climate change, devastation of the planet, an economic system that creates more poverty and disparity and a human path leading to the brink of destruction and soulless lives of consumerism.

“Laudato Si’: on Care for Our Common Home” will take time to read in depth and digest, but just as good cooks taste as they work on the sacred meal for guests and even share morsels with early guests, the tasting and sharing of morsels has begun.

This week I help lead a Wild GRACE youth and adult leader retreat at Ghost Ranch Retreat and Conference Center in Abiqui, New Mexico. The 90 participants (who are mostly Presbyterian) will be offered some tidbits to encourage, inspire and challenge them,  such as:  “Young people have a new ecological sensitivity and generous spirit, and some of them are making admirable efforts to protect the environment. At the same time they have grown up in a milieu of extreme consumerism and affluence which makes it difficult to develop other habits.”

I sing in gratitude for Laudato Si’ and pray with humility the lines of one of the prayers at the conclusion of the document.

God of love, show us our place in this world
as channels of your love,
for all the creatures of this earth,
for not one of them is forgotten in your sight.
Enlighten those who possess power and money
that they may avoid the sin of indifference,
that they may love the common good, advance the weak,
and care for this world in which we live.
The poor and the earth are crying out.
O Lord, seize us with your power and light . . .

[Sr. Joan Brown, OSF, is a Franciscan sister from the Franciscan Sisters of Rochester, Minnesota, and executive director of New Mexico Interfaith Power and Light.] 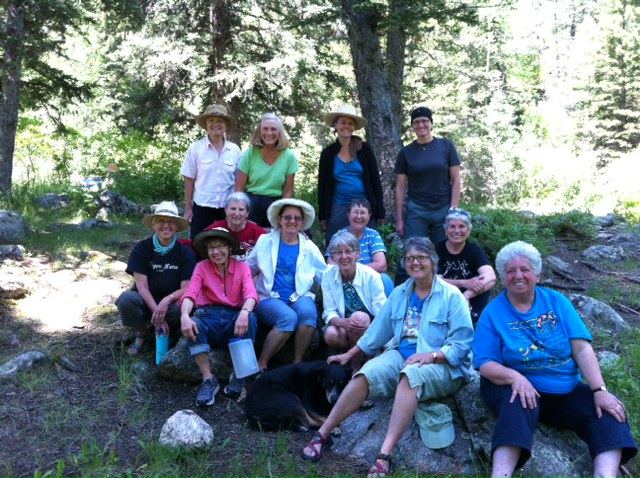