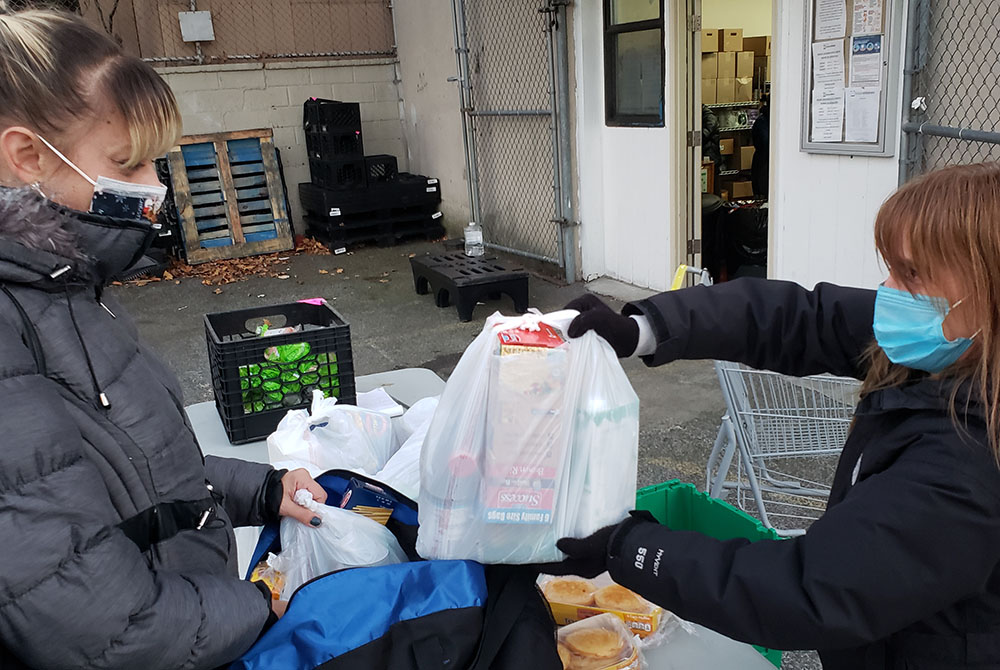 In a time of uncertainty, one thing U.S. women religious and others who have been providing food during the COVID-19 pandemic know for sure is that the number of those who need food assistance has risen dramatically and continues to rise.

Officials from Feeding America, a national network of more than 200 food banks, told The Washington Post they have distributed 5 billion meals this year, and 40% of their food bank clients are people who have never relied on them before.

And food insecurity is projected to get worse: There could be 50 million food-insecure Americans by the end of 2020, up from 35 million at the start of 2020, the Post reported. But unless Congress can break its deadlock on what assistance to provide, the federal food programs supplying about half of the food that food banks distribute will end.

At a New York City food pantry that is an initiative of Hour Children, a ministry headed by St. Joseph Sr. Tesa Fitzgerald, the number of families using the pantry's service is roughly double what it was over the summer.

Kellie Phelan, the food pantry's coordinator, is struck by the number of new faces she sees in the lines every week. Many are young people, and many are coming from different boroughs in New York City.

"People are coming from everywhere," she said. 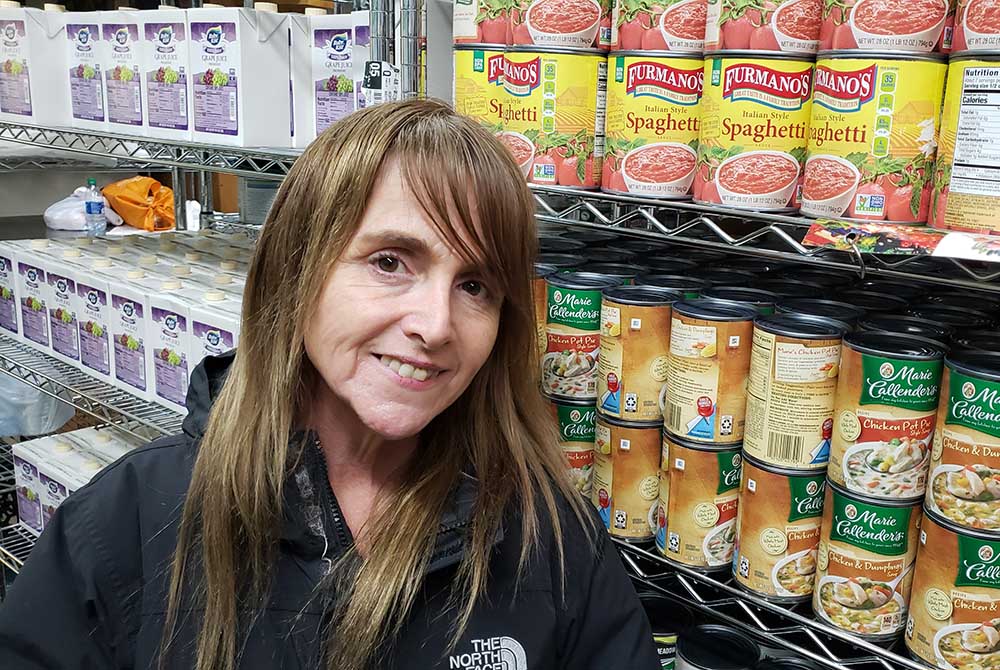 Kellie Phelan is the coordinator of a New York City food pantry that is an initiative of Hour Children, a ministry headed by St. Joseph Sr. Tesa Fitzgerald. (GSR photo/Chris Herlinger)

Phelan told Global Sisters Report that while the number of families using the pantry's services declined in the summer months from an early peak during the initial months of the pandemic, the numbers now are as high as they've been all year — about 700 a week.

The pantry, located in the Long Island City area of the borough of Queens, is open three times a week, and each day is averaging more than 200 clients, Phelan said. And she expects the numbers to stay that high or even increase in the coming months.

"There's a lot of panic thinking right now," she said. "Nobody knows what tomorrow is going to bring."

Local community groups in Queens are helping restock pantry shelves through food drives in which volunteers ask shoppers at nearby grocery stores to buy canned foods and other nonperishables and donate them as they leave the stores.

Those efforts have been a huge success, Phelan said, helping to "completely restock" the Hour Children pantry shelves. "We're beyond grateful."

Because of social distancing concerns, the pantry earlier this year changed procedures, and clients now come to a table where they receive a prepackaged bag of food items rather than entering the pantry premises and picking items "supermarket style." Those procedures remain in place, Phelan said, as do social distancing guidelines of people standing 6 feet apart.

But even with those guidelines in place, Phelan said, many clients are uncomfortable, particularly elderly people who are guarded about standing in line.

"It can be a scary situation for them," she said. "They are scared, sad, but still grateful." 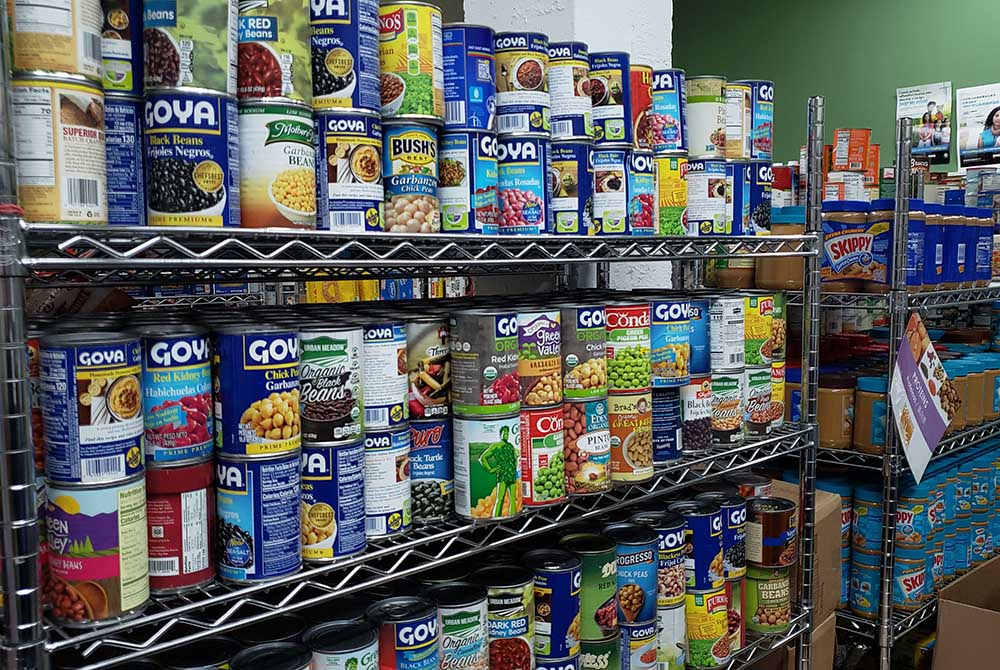 Local community groups in Queens are helping restock pantry shelves through food drives in which volunteers ask shoppers at nearby grocery stores to buy canned foods and other non-perishables and donate them as they leave the stores. Those efforts have been a huge success, food pantry coordinator Kellie Phelan said, helping to "completely restock" the Hour Children pantry shelves, seen here. (GSR photo/Chris Herlinger)

The House of Bread, a 40-year-old soup kitchen in the poorest neighborhood of Hartford, Connecticut, has also seen a change in its regular patrons.

St. Joseph Sr. Maureen Faenza, one of the kitchen's directors, said people addicted to drugs and those experiencing chronic homelessness are no longer the usual faces who come through for one hot breakfast and one hot lunch a day.

Though some still visit the kitchen, now, the House of Bread is largely seeing "neighborhood people, poor people, families who are struggling because they have lost their jobs and income," she said.

Faenza, co-founder and co-director of the House of Bread alongside St. Joseph Sr. Theresa Fonti, said since the start of the pandemic, the city has placed their homeless clients in hotels or other housing while their daytime shelter attached to the kitchen has had to shut down because of the pandemic.

Fortunately, the House of Bread was able to maintain operations throughout the pandemic, though they have had to manage with fewer volunteers, as some were elderly and couldn't take on the risk of exposing themselves to the virus, Faenza said.

With glass partitions protecting patrons who dine in, the kitchen is able to continue serving about 200 meals a day, with half of the visitors choosing to take their meals to go. And while the House of Bread usually delivers an additional 600 meals to children throughout the city, local schools have managed to provide those meals for the time being, though Faenza said they'll restart that program in January.

In terms of stock, Faenza said they haven't had a problem: This year's annual fundraiser was done as a drive-thru Nov. 18 and was "extremely successful," Faenza said. "We've been fortunate as far as donations and food."

But just a few miles over in West Hartford, Mercy Sr. Beth Fischer's ministry has had to make some adjustments that — while understandable and necessary — have been tough to swallow; namely, the lack of human connection between the volunteering students and the patrons at local food pantries.

Fischer oversees the community engagement office at the University of St. Joseph, where she works with students who are volunteers and those who do community clinicals and internships.

"For the 15 years I've been doing this work through the university, I've seen the transformation on the part of the students who get to meet people that they might not necessarily meet, but in a class, they might hear about it. And these experiences really touch them," she said. 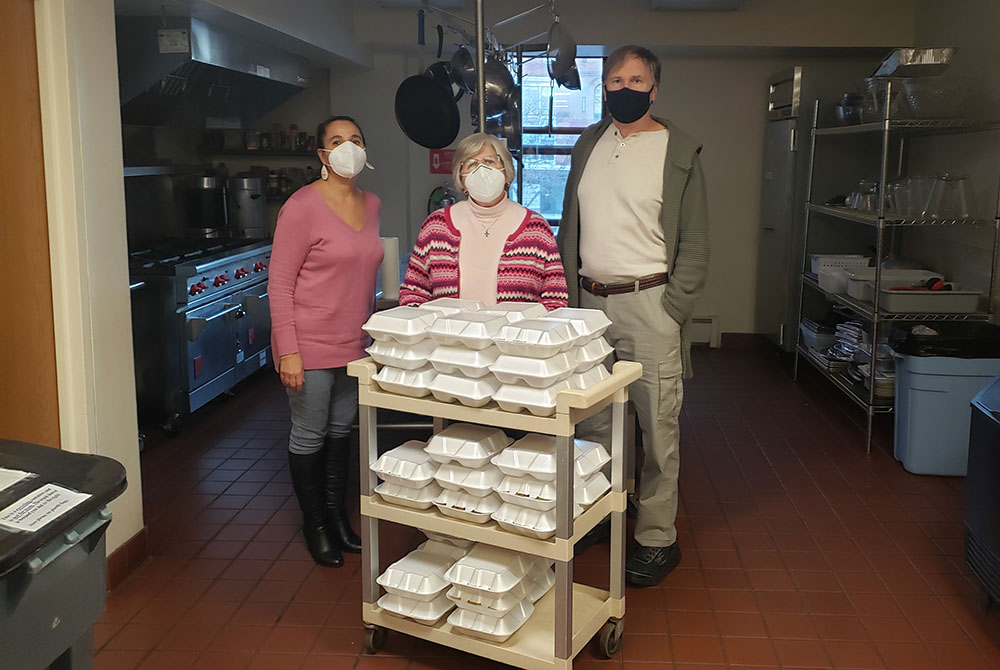 The agencies they work with include two local food pantries, where nursing students do health screenings on the patrons who come for food. The university also organizes food drives based on the needs of local pantries. (They collected 177 pounds of Thanksgiving sides this year.)

Fischer said as volunteerism from the general population has decreased because of the pandemic, university students have had to "step up" to fill the gaps, as more people staying home means fewer people dropping off food donations.

The soup kitchens now offer their meals to go rather than welcoming in people to sit and visit for hours.

"I understand it intellectually — you have to keep everybody safe," Fischer said. "But it's really put a damper on the human connections. It's been more isolating." 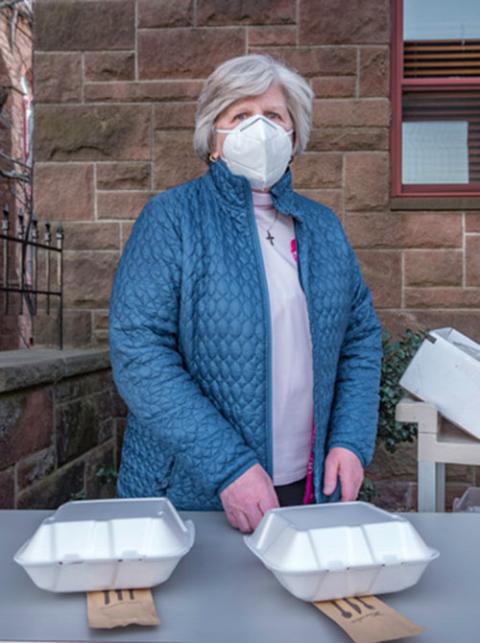 Groups no longer come in to watch the news or play checkers; instead, the individuals they've slowly allowed to dine inside have to practice social distancing and therefore leave right after eating to make room for others.

In one of the poorer neighborhoods of northeast Detroit, the ministry of two Sisters of St. Felix of Cantalice, known as the Felician Sisters, faces similar issues.

Sr. Felicity Marie Madigan and Sr. Shelley Marie Jeffrey had been running the Deo Gratias Café in the parish center at St. Jude Catholic Church, a place where they could build relationships with the community. Then the pandemic shut down both the café and the parish food pantry, so the sisters took over the food pantry operations and created a drive-by service where the sisters brought out bags of food and put them in patrons' cars.

The pantry was able to reopen inside the parish center in May, but the café could not because of statewide restrictions on dining indoors, so the sisters moved it outdoors, handing out boxes of food from the café curbside. In the last few weeks, patrons have been able to come inside after temperature checks and hand sanitizing, but only for carry-out service.

"They come inside, but they have to exit right away," she said.

The sisters also hand out face masks, baked goods and winter clothing such as scarves and mittens to the up to 70 people a day who come through to get the snack bags the sisters put together. 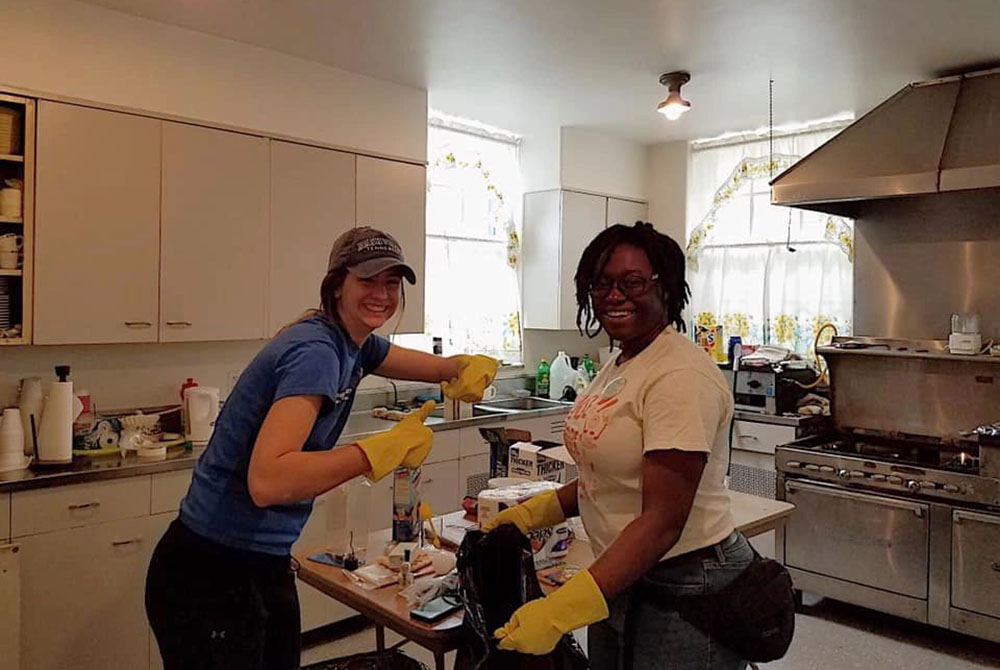 Volunteers work in the kitchen at the Deo Gratias Café in the parish center at St. Jude Catholic Church, where Felician sisters hand out bags of food to up to 70 people a day. (Courtesy of the Felician Sisters)

They recently held a community fundraiser to purchase food from struggling local restaurants that will be distributed at Christmas.

In Chicago, the need is increasing, said Sr. Stephanie Baliga, but it's not yet clear whether that is due to the pandemic or the increase in need they see every year when the weather turns cold.

The need "always goes up at this time," said Baliga, a member of the Franciscans of the Eucharist of Chicago, which runs a food pantry at the Mission of Our Lady of the Angels in Chicago's Humboldt Park neighborhood.

Before the pandemic, the pantry served about 225 people a week. Now, it serves more than 500 people a week. A saving grace has been the U.S. Department of Agriculture's Coronavirus Food Assistance Program, which has been providing at least 30,000 pounds of food a week to the pantry, Baliga said. But the funding for the program is due to end Dec. 31, and no one knows whether it will be extended.

Because of the need for social distancing, the food pantry had to be moved outside and turned into a sort of drive-thru, a situation Baliga does not see changing anytime soon, despite the bitter winter weather she knows is on the way.

"We'll be outside until June or so, probably," she said. "But I'll put on a pair of big ol' boots and be ready to go. At least the neighbors get to drive up and stay in their cars. It's only us that have to be outside."