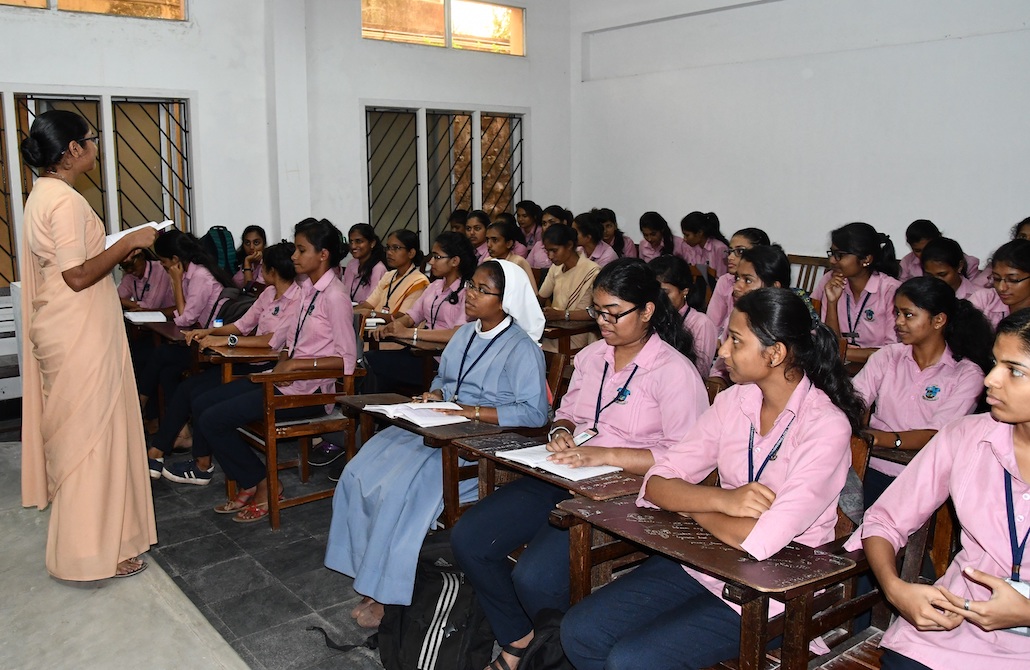 Alisha (not her real name), an 18-year-old abuse survivor, thanks Apostolic Carmel nuns for giving her "a new lease on life and a future."

The curly haired girl has joined a training school for nurses after completing 12th grade at Carmel School, managed by nuns of the 150-year-old indigenous congregation in New Delhi's diplomatic enclave.

"I was sexually exploited by my stepfather when I was just 7 years old and I lived a life of utter shame, fear and poverty in a notorious slum in Old Delhi," a confident Alisha told Global Sisters Report over the phone in fluent English in late March.

Sr. Maria Nirmalini, the congregation's current superior general, says they have several such testimonies from their alumni who have become independent and courageous women despite their "bleak, dark, exploitative childhoods" similar to Alisha's.

Founded in India in 1870, the Apostolic Carmel sisters started a century and a half of their devotion to educate girls in India. In 2019-20, they celebrated their 150th jubilee and, in 2020-21, the centennial of St. Agnes College, founded in 1921 by visionary Mother Mary Aloysia, the second superior general of the Apostolic Carmel.

Nirmalini says her congregation's charism in the past 150 years has been "Education for Women's Empowerment."

"As we celebrate our jubilee, we are proud to have promoted many Alishas all over India who can assert their role and dignity," Nirmalini told GSR from the southern Indian city of Bengaluru, where the congregation's generalate is now based.

The congregation has 158 convents in India, about 10 in Sri Lanka, and others in Pakistan, Kuwait, Bahrain, Kenya, Tanzania, Uganda, Bayonne, France and Rome. Currently Apostolic Carmel has 203 convents around the globe, managing exclusive schools and colleges for women worldwide, Nirmalini said. In India, they now operate 247 primary and high schools, four colleges and four teacher training institutes.

The congregation is an offshoot of the Order of Discalced Carmelites founded in 1868 at Bayonne, France, by Mother Mary Veronica of the Passion. Its first Indian convent was established in 1870 by Bishop Marie Ephrem at what was then Mangalore (renamed Mangaluru in 2014).

In the same year, the nuns started their first school, St. Ann's School at Mangalore, a port city in the southern Indian Karnataka state, to implement their charism.

The superior general says that the Apostolic Carmel are an indigenous congregation as all their administrative bodies are located in India.

Nirmalini says, during its jubilee year that began in November 2019, the congregation took up projects such as building houses for impoverished people.

"Our original plan was to build 150 houses for the poor, and we assigned each of the [some] 150 convents in India to build a minimum of one house out of savings from the sisters. But the number of the houses has crossed 200."

Another post-jubilee project is an adult education program for more than 60 widows in Bengaluru.

Their schools, especially those in cities, every year admit a certain number of students like Alisha from difficult circumstances and "ensure that they are empowered in every sense."

Alisha is among the several girls rescued from Delhi slums by a social worker and referred to the Carmel school for education.

Nirmalini was the principal of the Carmel School when Alisha was brought there by Maheshwari Deep, a Christian social worker who manages "Jagriti" (Awakening or Vigilance), a non-governmental organization offering support services to women and street children in the Indian capital.

Deep is grateful to the Carmel School for educating several girls she had rescued from "exploitative environments."

Nirmalini recalls admitting Alisha and three other girls from Jagriti into the sixth grade seven years ago. "It was very difficult for them to catch up in the beginning, but they improved gradually and all of them passed their 12th grade with good marks."

Alisha, who scored 71% marks on the 12th grade exam, says the "sisters and teachers helped me with special classes and lots of counseling that made me confident."

She said Nirmalini had spent a lot of time with her and encouraged her to even file a case against her stepfather, which she pursued but now has paused until she finishes her nursing studies.

She continues to receive counseling support from the nuns and teachers of her school.

"I got a new birth because of the education at Carmel School," says Alisha, who had the opportunity to study with children of diplomats, politicians and industrialists.

Nirmalini says their alumni who had come from various religious, cultural or ethnic groups have excelled in several fields.

One of them is Sparsha D'Souza, a judge in Mangaluru. She says she inherited her sense of justice from her college and the sisters. "I was deeply influenced by their simplicity and passion for the empowerment of women and social justice, which led me in my career as a lawyer and judge," D'Souza told GSR.

Vidya Dinker, an environmentalist and activist, says she developed her focus in life at St. Agnes. "I got ample opportunity to interact with the sisters as I stayed in the convent hostel during studies," said Dinker, whose mother also had studied with the Carmel nuns.

Isha Goyal, the CEO of STIC Travel Group, a tourism business in India, told GSR that she inherited a sense of "gratitude and humility" from the Carmel sisters that has "led me to the heights."

Goyal credits Delhi's Carmel school for laying the foundation of her value system. 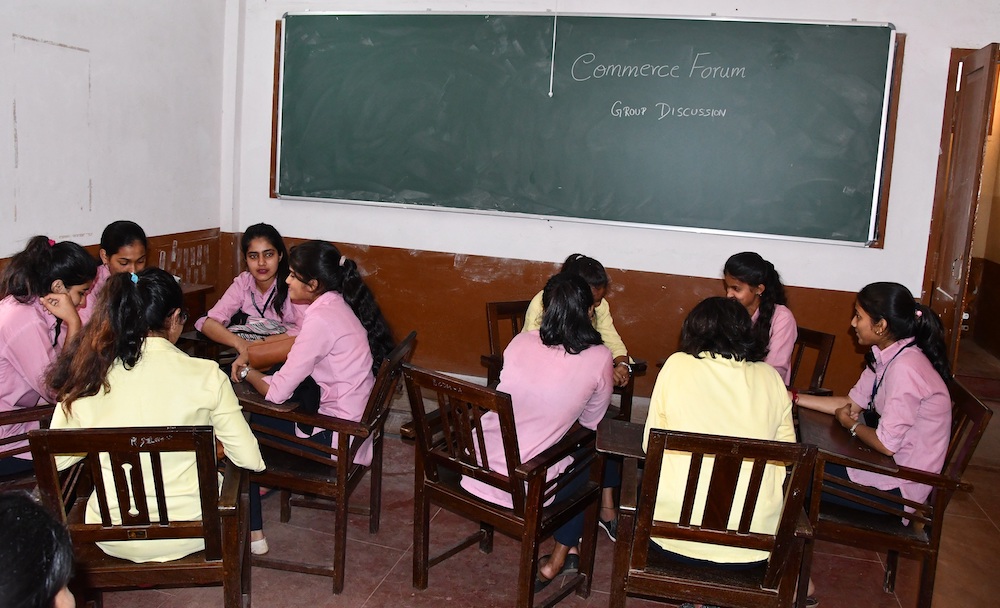 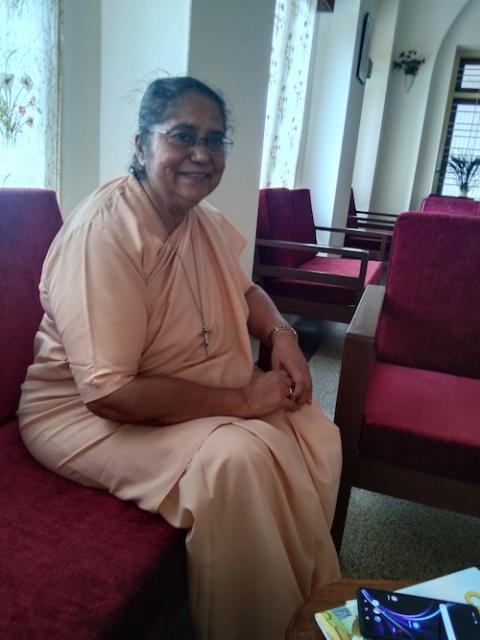 "As a Hindu, I received value education while my Christian friends attended catechism," she recalled.

Sr. Lydia Fernandes, the superior of Mangaluru's St. Agnes Convent, considers their congregation and women's education as two sides of the same coin as both have grown together.

"We started women's education at a time when girls received little or no education. They used to be married off in their early teens," Fernandes told GSR.

Fernandes quoted the British Government's Hunter Education Commission report to point out that only 0.2% of women in southern India were literate in 1881 because society then did not encourage formal education for girls.

The foundation for women's education in India and Sri Lanka was laid by Mother Mary Aloysia, the first native woman to join the congregation, Fernandes said.

The congregation opened a teacher training institute in 1890 at Mangalore in response to a request from the British colonial rulers. Fernandes said their charism was further expanded through the lay women graduates from the institute who fostered quality education and value formation.

The congregation manages several colleges, besides primary and secondary schools.

Sr. M. Venissa, the principal of the St. Agnes College, says her institute has nearly 5,000 students. Thousands of their former students are spread over 150 countries.

"When we educate a girl, we are educating an entire family and community," Venissa claimed and added that an "empowered woman rekindles love and respect in the entire generation." 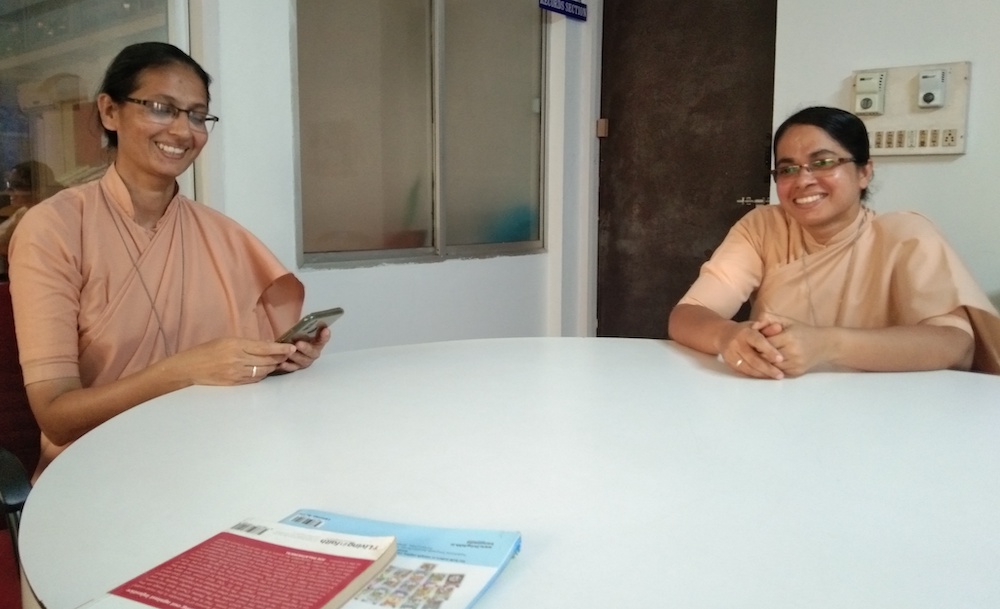 Speaking about the challenges in the past 150 years, Nirmalini said they enjoyed great patronage during the pre-independence era from the British government as well as from the public. "We opened most of our schools at the request of the people or the government, and not according to our plans," she said.

However, the current sociopolitical situation challenges them as "everything is interpreted from the conversion angle and the government keeps changing policies against the religious minority institutions," said Nirmalini, who has won several awards for outstanding work in education.

[Thomas Scaria is a senior journalist based in India who has written for the Union of Catholic Asian News since 1991. He also writes for Matters India, a news portal that focuses on religious and social issues.]