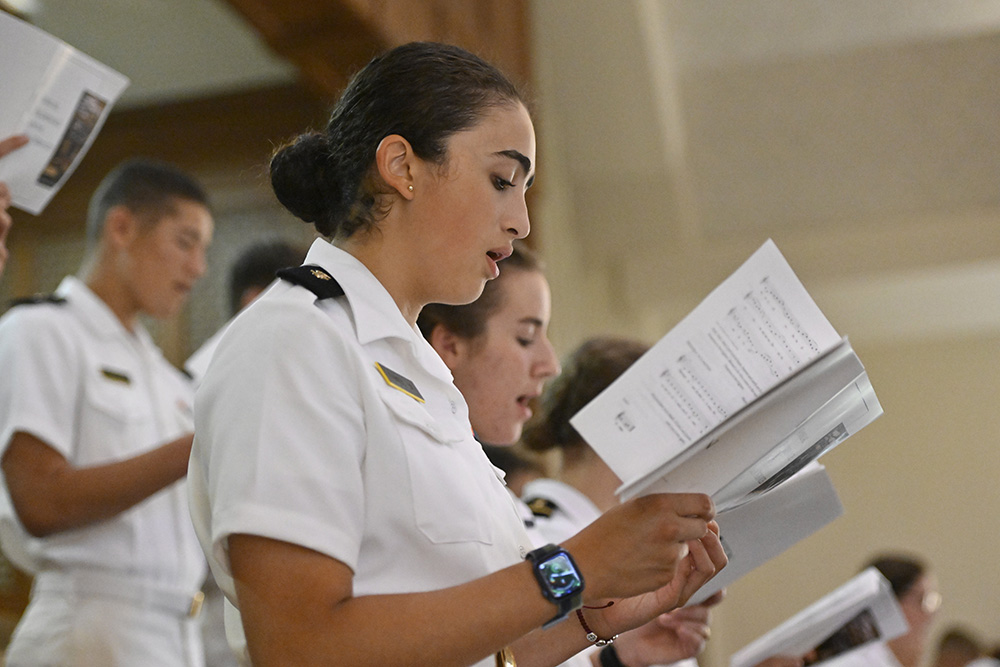 The U.S. Naval Academy Catholic Choir sings hymns Oct. 2 during the Pilgrimage of the Sea Services Mass at the Basilica of the National Shrine of St. Elizabeth Ann Seton in Emmitsburg, Maryland. (CNS/Courtesy of Devine Partners/Jason Minick)

Archbishop Timothy Broglio of the Archdiocese for the Military Services said Oct. 2 he is committed to serving those who go to sea by redoubling efforts to attract more chaplains and to protect Catholic organizations on military installations.

He made the comments in his homily during the annual Pilgrimage for the Sea Services Mass at the National Shrine of St. Elizabeth Ann Seton in Emmitsburg.

"The Archdiocese for the Military Services must imitate those she serves," Broglio said in his homily. "We are forever on the offensive to seek more priests for the chaplaincy and to find new ways to bring the Gospel to the young people entrusted to her."

At the special Mass, which was broadcast live on EWTN, members of the U.S. Navy, Marine Corps, Coast Guard, Merchant Marines and Public Health Service joined others in prayer to thank St. Elizabeth Ann Seton for her protection and to ask for her continued intercession for all Sea Services personnel and their families back home.

As the patroness of the Sea Services, the saint has deep connections to those who spend their lives at sea and those devoted to public health.

Two of her sons, Richard and William, served in the Navy on the USS Cyane and USS Macedonian, respectively. Her father, Richard Bayley, was a prominent New York City physician in the 18th century and the city's first chief health officer.

Retired Adm. William Fallon, chair of the pilgrimage sponsoring committee, said she understood what the Sea Services' personnel and their families "experience every day in serving our nation and the sacrifices that such service demands."

"By her prayers and example, Mother Seton remains a faith-filled inspiration and guiding light for those in uniform and their families and friends," he added.

In addition to asking the saint to intercede for the safety of all those who serve, those who have fallen and for the nation, attendees at the Mass prayed for more Catholic priests to serve as chaplains.

Besides recruiting more chaplains, "we must defend the space that is provided," Broglio said.

"The closure of Catholic programs on naval installations is a great concern, because it means that, despite the presence of the chaplaincy, there will be no Catholic voice, advocacy or presence," he said.

"So often the 'numbers game' that has been used only counts noses in a chapel," he said, "and does not look at baptisms, marriage preparation, confessions or merely the sailor looking for counsel from a Catholic priest."

Sr. Mary Catherine Conway, a Daughter of Charity who resides at the shrine, welcomed Massgoers and asked them to remember St. Elizabeth Ann Seton as someone who prayed constantly for the return of her sons from sea and for their spiritual welfare.

Most people know her "as a pioneer in Catholic education and the foundress of the Sisters of Charity of St. Joseph's," she said.

"In fact, it's from this very place that Mother Seton's sisters went out to establish schools, orphanages, and hospitals and other good works," Conway said. "Today, however, we remember Mother Seton as someone much more ordinary — a mother." 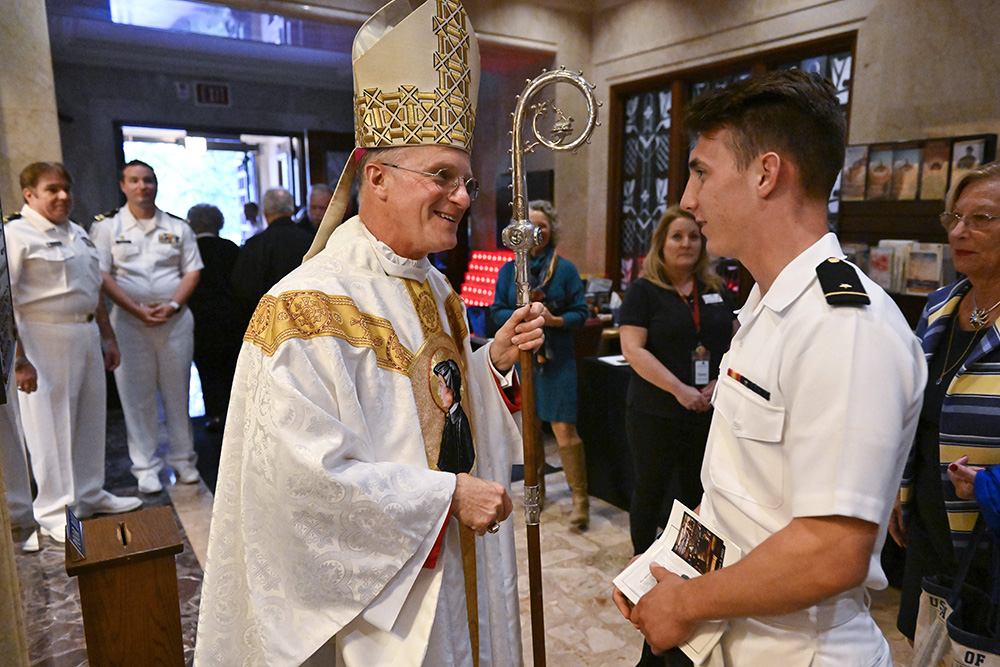 The Mass included singing by the Catholic Midshipman Choir from the U.S. Naval Academy and a blessing of Sea Services medals by Broglio.

The celebration of the Mass began with the presentation of the colors by the U.S. Naval Sea Cadet Corps and the singing of the national anthem.

St. Elizabeth Ann Seton was designated as the patroness of the Sea Services in 1977, two years after her canonization.

The late Cardinal John O'Connor of New York, who was then Navy chief of chaplains, worked with the late Adm. James Watkins, then chief of naval personnel, to secure the designation in recognition of Mother Seton's ties to the Sea Services.

"In the letters between Elizabeth and her sons, we see a concern that is shared today by parents, spouses and children whose loved ones serve at sea," Conway said. "Because of this, Mother Seton is patroness of the Sea Services. She is a powerful intercessor for those who serve at sea and for those who await their return."

Broglio noted that the Mass readings toward the end of the church's liturgical year call the faithful to consider the end times and the second coming.

"St. Elizabeth Ann Seton also teaches us that broader vision and that trust," he said. "Disinherited by her family for embracing the Catholic faith, she moved forward, raised her own family, and founded a religious order that still manifests the virtue of charity today."

"One of her messages fits well with the passages heard today: 'If it succeeds, I bless God. If it does not succeed, I will bless God, because then it will be right that it should not succeed,'" the archbishop said.

Read this next: Campaign aims to keep seafarers' livelihoods afloat during coronavirus hardships