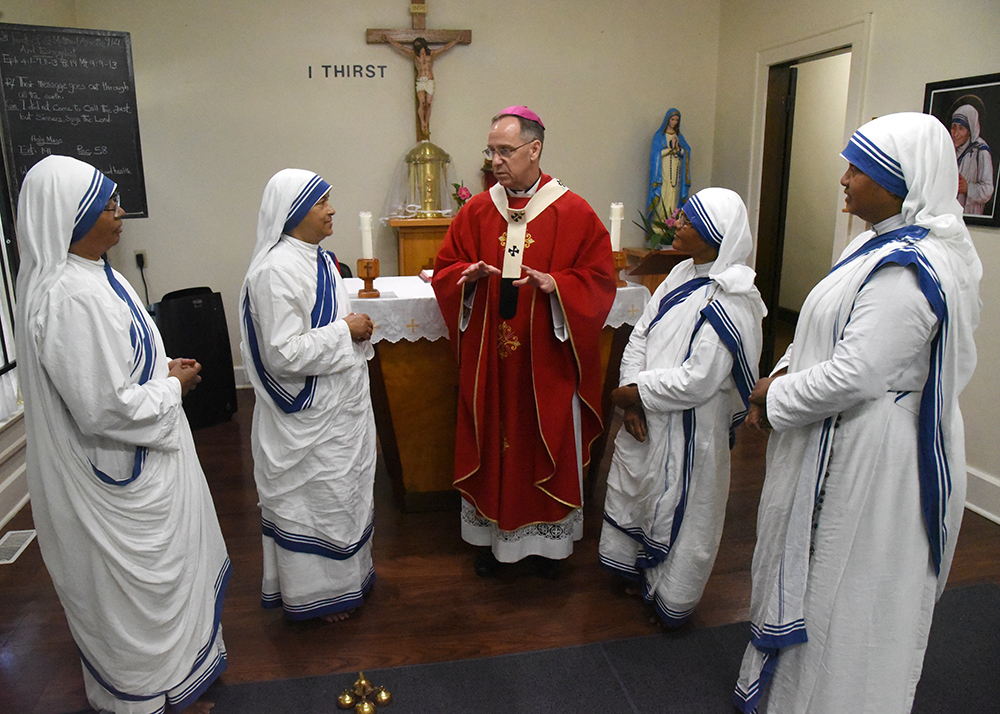 Archbishop Charles Thompson of Indianapolis speaks Sept. 21 with four Missionaries of Charity after celebrating Mass for them at the congregation's Our Lady of Peace Convent, located in one of the city's poorest neighborhoods. The sisters are, from left, Sister Emerita, Sister Paulinus, Sister Janita and Sister Kiron Jyoti. (CNS/The Criterion/Sean Gallagher)

Missionaries of Charity are known around the world for their total dedication to serving the poorest of the poor solely out of their love for God.

In Indianapolis, four sisters of the congregation founded by St. Teresa of Kolkata have lived, prayed and served those in need in a poverty-stricken neighborhood on the near east side of Indianapolis since 2000.

"You reach out to the poor, the vulnerable and the needy in all the different countries where the Missionaries of Charity are located," Archbishop Charles Thompson said during a Mass he celebrated for the four sisters in the chapel of their Our Lady of Peace Convent.

"The world sees someone who's been pushed aside, as Pope Francis says, to the peripheries," the Indianapolis archbishop said Sept. 21. "You see the dignity of that person whom you've been called to serve. I'm preaching to the choir. You know this better than me."

Two of the Missionaries of Charity serving in Indianapolis knew St. Teresa, best known as Mother Teresa, who died 25 years ago. The congregation she founded now has more than 5,000 sisters.

The two sisters spoke with The Criterion, newspaper of the Indianapolis Archdiocese, about the effect she had on their lives.

They also reflected on the ministry that they do on the streets of Indianapolis and through a shelter for women and children that they operate in their convent.

Sister Kiron Jyoti was 19 when she joined the Missionaries of Charity in 1995. Growing up near Kolkata, she often heard St. Teresa's name in her family home.

Sister Kiron Jyoti got to know Mother Teresa herself after entering the order.

"Mother was just a simple woman like any of us," she said. "We had tea together or dinner together. She was a very joyful person. Her love for God was so deep. You could feel it when you were around her."

The sister was in the second year of her novitiate when Mother Teresa died Sept. 5, 1997.

"I was there when Mother passed away that evening," she said. "It was at about 8:15. The news went out and plenty of people came. It was like they were breaking down the motherhouse.

"It was a sad experience. It was like part of my life had gone. But we knew that she had gone home to God. That's what she taught us. There was a lot of support from people."

Sister Janita, the superior of the Missionaries of Charity in Indianapolis, didn't know much about St. Teresa while growing up in a part of India far from Kolkata. But as she came to know the sisters of the order and their ministry, she chose to join them.

Later, St. Teresa personally took her to Rome and then to the Philippines to minister in both places.

"Mother was very simple," Sister Janita said. "She told everyone that she met, 'Jesus loves you.' "

Both Sister Kiron Jyoti and Sister Janita ministered in countries around the world before coming to Indianapolis earlier this year.

The women who come to stay in their shelter, usually for no more than three weeks, know both kinds of poverty, she noted.

"The ladies who come here are very broken," Sister Kiron Jyoti said. "I talk with them. I try to listen with an understanding heart. Many of them find peace before they leave this house."

"We tell the ladies who come here when we pray with them that God brought them here and that they are our sisters," said Sister Janita. "Then they are happy, because we are one with them."

The Missionaries of Charity in Indianapolis also teach children preparing for their first Communion at nearby St. Philip Neri Parish. They also visit women incarcerated in the Marion County Jail.

And they simply walk regularly through their neighborhood, usually praying the rosary while they do, wearing their distinctive white sari habit marked with blue stripes.

"It's a witness," said Sister Kiron Jyoti. "Whenever they see us with our religious habit, it's a witness. Like St. Francis said, we preach without preaching."

"When we walk along the street, we're praying the rosary for all the people, for our own conversion and the conversion of others," she said. "It's the same work that we carry on no matter where we go."

All of their ministry is powered by prayer. The sisters pray four and a half hours each day, starting at 5 a.m. with an hour of prayerful meditation. They also worship daily at Mass and during a Holy Hour before the Blessed Sacrament.

"It's like a car," said Sister Kiron Jyoti. "When the fuel goes out, what do you do? You go to the gas station and fill it up. That's what we do. We fill up ourselves. And when we're full with Jesus, we go out."