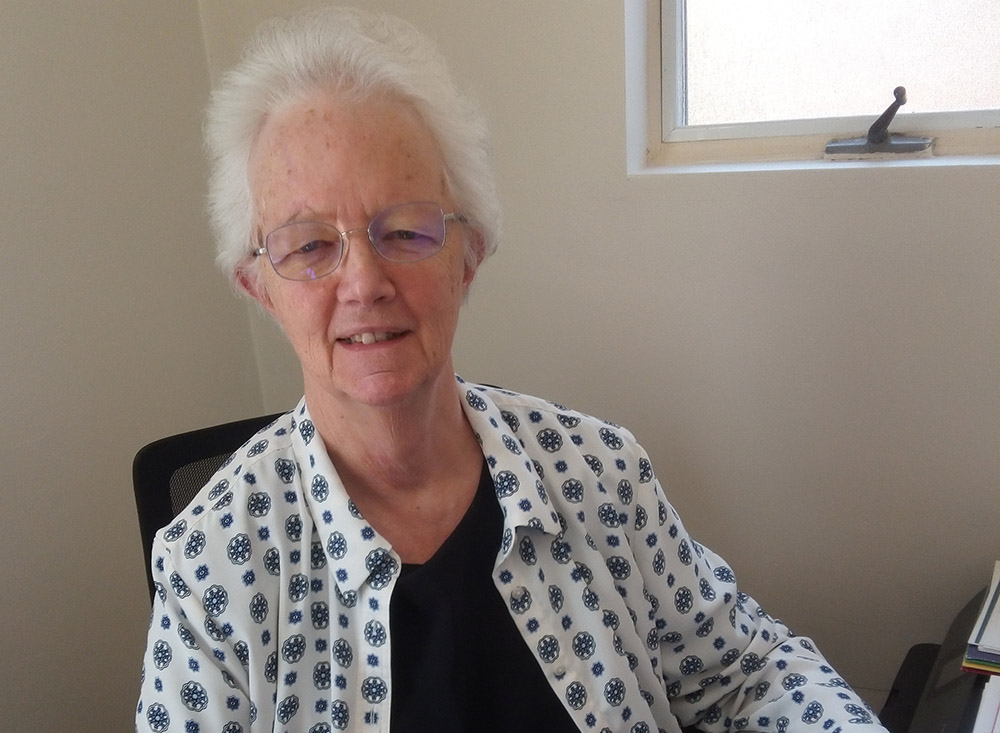 The network's mission is to mobilize "Catholics and all people of goodwill to value life over death, to end the use of the death penalty, to transform the U.S. criminal justice system from punitive to restorative, and to build capacity in U.S. society to engage in restorative practices."

In her current ministry, Reilly is focused on advocacy against the death penalty, an institution that is beginning to be dismantled in a number of states, most recently in Virginia. However, the penalty was used significantly during the last months of the Trump administration: The United States executed 13 people from July 2019 to January 2021.

"Hopefully, that is now over," Reilly said.

If President Joe Biden sticks to his vow to ban federal executions, Reilly said she and others "will be turning our focus to the individual states considering abolition."

Also important, Reilly added, is working to raise the voices of murder victims' family members who oppose the death penalty, as they can be "the most powerful voices in this struggle to abolish the death penalty."

Her work with Catholic Mobilizing Network follows her time in various ministries, including nine years as her congregation representative at the United Nations. Trained as a teacher, Reilly holds a master's degree in peace and justice education and a Master of Divinity from Weston Jesuit School of Theology. (Weston merged with another institution in 2008 to become the Boston College School of Theology and Ministry.)

While living in Connecticut in the early 2000s, Reilly began to correspond with Michael Bruce Ross, who was then a death row inmate. Ross, who had been convicted for serial murder and rape, had decided after 17 years on death row to forego all further appeals and ask for an execution date. 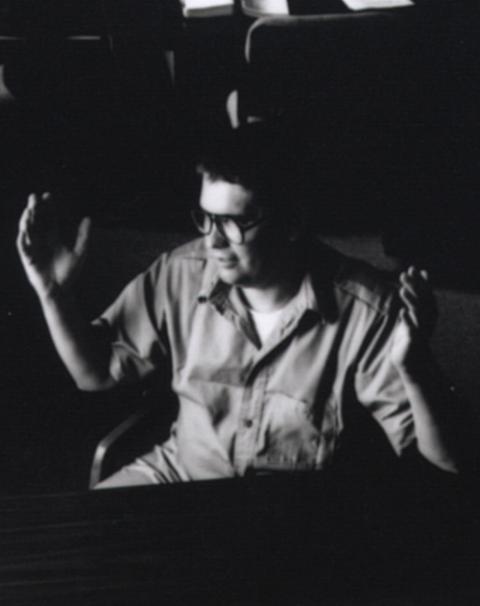 Michael Bruce Ross is seen in prison in 1994. Convicted in 1987 for serial murder and rape, he was executed in 2005. (Newscom/ZUMA Press/Lou Jones)

Reilly agreed to meet Ross, though initially, she was wary of doing so over Ross' insistence that he would not talk to her about his decision to end all of his court appeals.

"There would be no point to a visit if we couldn't discuss what really matters," she later wrote in an unpublished reflection, noting that she had been a public opponent of the death penalty for years, first in Virginia, where she organized vigils on the days of executions, and then in Connecticut, where she had testified at state legislative hearings against executions. She also persuaded her religious community "to toll our bells each and every time an execution occurred anywhere in the country."

Eventually, Reilly met with Ross and would continue to do so through the winter and spring of 2005, becoming his spiritual adviser. On the first visit, "I could not help but think of Sr. Helen Prejean's reminder to any of us who work with people on death row, that we are all more than the worst thing we have ever done," she wrote in the reflection.

The two disagreed on whether the execution should go ahead, but Reilly always affirmed Ross' humanity and her belief in the "sacredness of all human life." Ross was executed May 13, 2005 — the last execution Connecticut performed and the first and only done by lethal injection in that state. Connecticut outlawed the death penalty in 2012.

GSR: Tell us about your early experiences with the death penalty.

What are the origins of the Catholic Mobilizing Network?

It grew out of the tradition of Catholic social teaching and the U.S. Conference of Catholic Bishops' Campaign to End the Use of the Death Penalty. We felt that they couldn't let the statement just sit on the shelf, and so now we're engaged in several areas: education, which includes providing resources to churches; advocacy in supporting state and local campaigns against the death penalty; and prayer, which includes organizing prayer vigils and distributing prayer material.

We've also expanded the mission to include promoting restorative justice, the idea that crime should be understood by how individuals, families and communities have been harmed. The U.S. justice system is focused on punishment. Restorative justice focuses on the human cost of crime, asking who got harmed, what harm was done and what can be done to right the harm. In many cases, this means having those who committed crimes and those who were harmed by them to meet and begin the process of healing.

Despite Catholic social teaching and statements like the one from the bishops, there are still many U.S. Catholics who support the death penalty. How do you counter that support?

Sometimes it takes a gentle reminder that this work is part of the pro-life agenda, which says that all life is sacred. Other times, the witness of murder victims' family members who say, "Don't kill in my name," can change hearts. And we never tire of quoting Pope Francis in his 2020 encyclical, Fratelli Tutti, which says that "the death penalty is inadmissible" and the church is firmly committed to calling for its abolition worldwide.

Your focus continues to be on the death penalty, and your experience with Michael Ross is one basis for that ministry. Looking back on that experience, what do you remember about him?

Michael was a mixture of good and bad, as we all are, and I still believe what Helen Prejean said about all of us being better than the worst thing we have done. He was very kind and respectful to me. But his crimes were absolutely egregious. We never discussed the crimes, per se. But one thing he always said was that he didn't want to cause the victims' families more pain by continuing the appeals process.

What was the reaction in the prison to your visits and to Ross?

I was treated very sternly. The contempt everyone felt for him was palpable. The attitude seemed to be, "Why would you want to visit that piece of trash?"

Looking at the issue more broadly, I assume you welcome President Biden's opposition to the death penalty?

It's great progress, yes, but we still have to keep pressure on, which is why we're gathering signatures for a petition that, among other things, asks the president to impose a moratorium on the death penalty at the federal level. We recognize that if Biden does that, he will get a lot of grief; there is still a vocal minority of people who support the death penalty.

But the percentage of Americans opposing the death penalty is now as high as it's been in decades, and the high number of federal executions has helped that. There is also the way the death penalty has disproportionally been applied against those who are not white, and there's more awareness of that now. 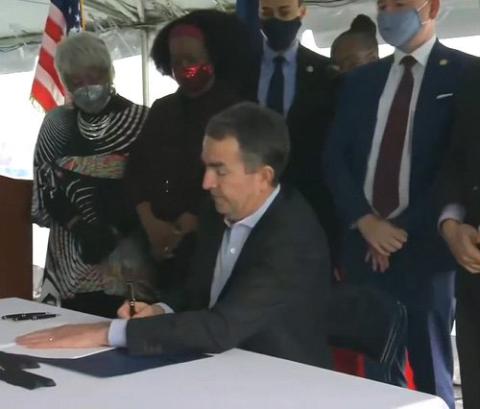 Why did Virginia change its position on the death penalty?

The demographics of the state are changing, particularly with more people moving to the suburbs of Washington, D.C., so the legislature has changed. But I think the fact that there have been more and more cases of people being exonerated in death penalty cases has also played a role.

Your organization says the families of murder victims are often the best advocates against the death penalty. Why?

They are such powerful witnesses and are very clear that murdering another person in the name of justice doesn't accomplish anything. I've heard families say, "It's horrible to lose a child. I don't want anyone else to experience that."

We mourn, pray for and stand in solidarity with the victims of these terrible tragedies in Georgia and Colorado. Incidents like these mass shootings certainly give us pause, but when we return to our core belief, that all life is sacred, we continue to stand against the death penalty. Acts of mass violence do not change the fundamental teachings of our church on the inherent dignity of every person.

How has your experience in this work connected with your spiritual life?

Something within me has been called to reach out to those most in need. Visiting Michael Ross, particularly at first, was a very difficult experience. But I felt I was fulfilling a role. People asked me, "How could you do that?" And I said, "It needs to be done. Here I am."

But there is another issue here. As everyone knows, Catholic sisters are an aging population in this country. But we're a committed, educated group of women who have what is needed to stay in the struggle. Sisters have so much to offer, and it's good that my organization and others recognize the gifts and importance of sisters. There's more to be done, and there is more that nuns can do.