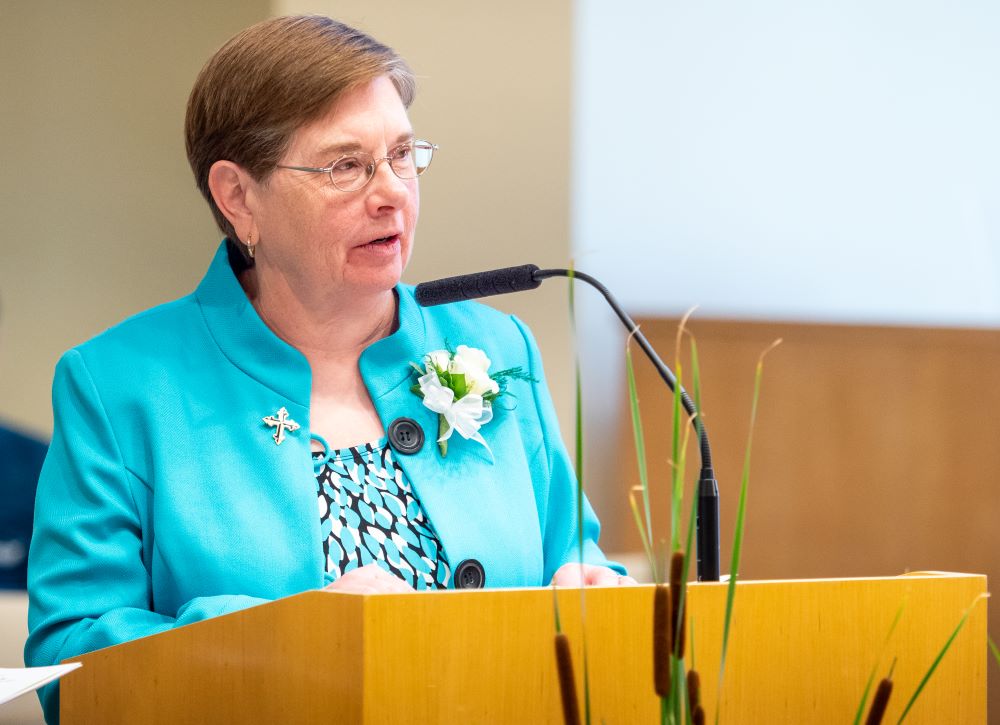 Sr. Maureen Geary of the Dominican Sisters of Grand Rapids, Michigan, preaches at the congregation's annual gathering in 2018. (Courtesy of the Grand Rapid Dominicans)

In her late 20s, she was an attorney and an accountant at a great law firm where she was happy. But something kept telling her that her gifts could best be put to use with the Dominican Sisters of Grand Rapids, Michigan, the sisters who taught her from second grade on.

Finally, in 1987 at the age of 31, Geary joined the Order of Preachers as a candidate — but kept working part time at the law firm, just in case.

Now, she is president-elect of the Leadership Conference of Women Religious, which represents about 80% of the nuns and sisters in the United States.

On Aug. 12, at the conference's annual assembly, Adrian Dominican Sr. Elise García ended her term as past-president and left the triumvirate presidency while Sr. Jane Herb of the Sisters, Servants of the Immaculate Heart of Mary moved from president to past-president, Springfield Dominican Sr. Rebecca Ann Gemma moved into the president role, and newly elected Geary began three years of what she said "is going to be an excellent adventure."

Geary, 66, is in her 16th year of congregation leadership and has served on the LCWR national board and several committees, including the Discerning Our Emerging Future committee. She also served in ministries with the Diocese of Grand Rapids' secretariat for social justice and the Kent County Coalition to End Homelessness.

GSR: Some people seek out leadership roles while others shun them. Where are you on being a leader?

Geary: I enjoy the ministry of leadership. It's a privilege to serve — the experiences you have, the people you meet, the challenges you face. But I didn't actively seek it. At the point I became eligible [for congregational leadership], I left my name in, and when the congregation summoned me, I was happy to serve. 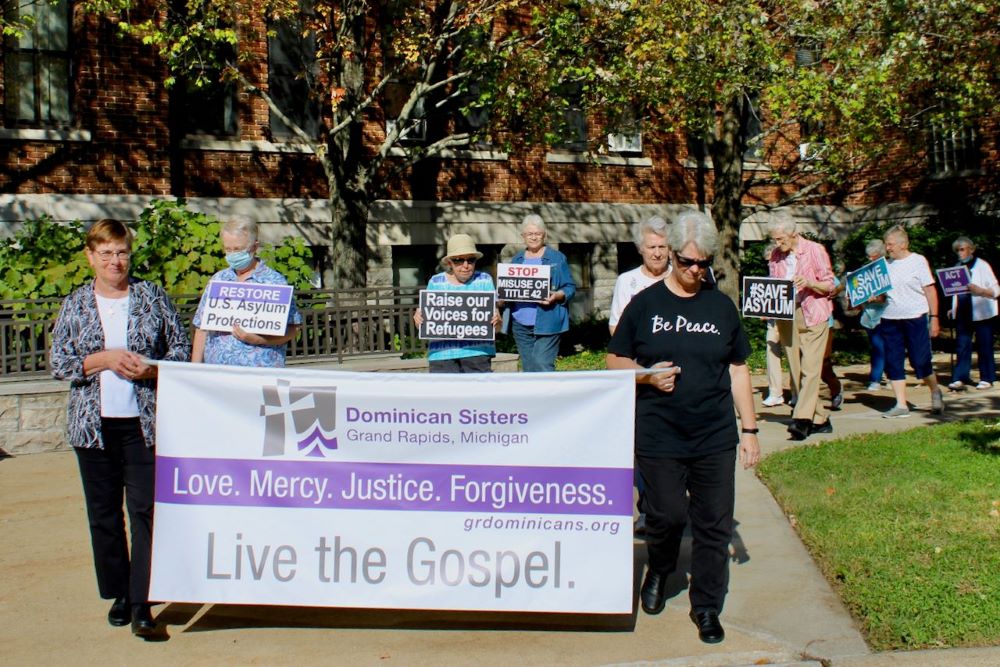 Of course, living in community and serving on that community's leadership means others have to discern this choice, as well.

There was definitely consultation and conversation among those of us on the leadership team about it. In the past, when I was nominated and chose not to leave my name in, it was because of the time commitment. I've also served on at least 15 nonprofit boards — as many as four at a time — but my last local board commitment ends this December, so time I've given to other boards has become available. My other outside commitments are also decreasing, so this time, I talked with the other team members about it. They are definitely part of this.

When you finally chose to become a sister, what made you choose the Grand Rapids Dominicans?

As I explored religious life, I heard a variety of stories. I knew one woman who visited 15 motherhouses. But I had Dominican sisters, specifically Grand Rapids Dominicans, as teachers all through grade school and high school, so I knew the Grand Rapids sisters very well. Their joy, their approach to life — and there were some family friends that were sisters, so that's where I really looked.

As I joined and learned more about the congregation, the Dominican Order of Preachers fits me very well. The Dominican charism is definitely where I belong.

My dad was a Catholic school teacher, so all through life, I had lots of connections to sisters and clergy. His refrain was always that we're more when we're together than when we're apart.

How do you see your law and accounting background helping as LCWR faces the challenges of the next three years?

Law and accounting help me understand structures, how structures can help, how planning can help, resources.

This is a time when we can be creative. We do have a collective future; there's plenty of opportunity to live our call to religious life. I feel like it's a blend of recognizing the organizational changes that are happening as well as the creativity you can bring to it. There's still plenty that is life-giving, and there's plenty to help us in discernment and direction-setting.

Sisters are recognized by being always called to be present to someone in need, and there's always a need out there to be present to. So even in a time of diminishment, there's the opportunity to influence through advocacy. There's ministry of prayer, ministry of presence, and we have the opportunity to keep listening. Our LCWR Call goes through 2022, so we're also asking ourselves as an organization, what is our next work, what is our next call? 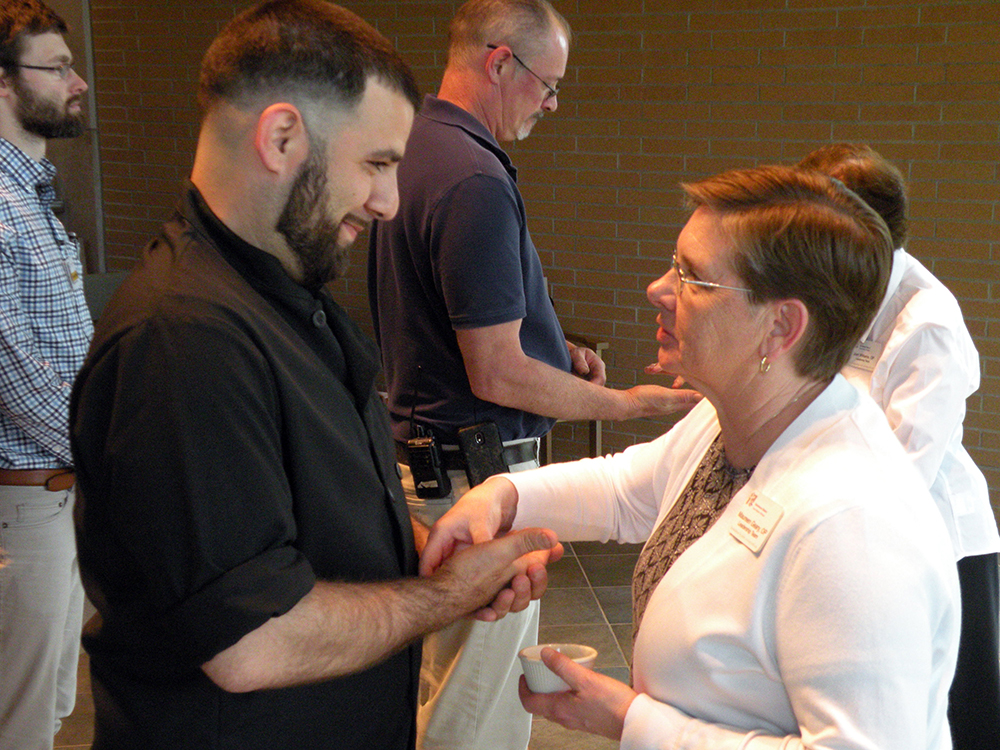 Sr. Maureen Geary blesses the hands of congregational employee Timo Froehlich during the community's 2019 Blessing of the Hands ceremony. (Courtesy of the Grand Rapids Dominicans)

What has been the best part of religious life?

That's one question, but I have three answers.

One, my own faith life has developed. I had the opportunity to study theology, to take part in communal prayer, private prayer, to become aware that we are persons who are called together, that it's not an individual life.

Two, I've been able to be part of the responses to calls for justice. One ministry I had was working with the county coalition here to end homelessness. I learned about urban sprawl and about poverty and where resources go and don't go. I think I would have served on the nonprofit boards anywhere, even if I wasn't a sister, but the Grand Rapids Dominicans are recognized as a voice the local community would like to hear.

Third is the communal aspect of it. I'm from a family of six kids, so [living in community] just expanded that.

This story appears in the LCWR 2022 feature series. View the full series.