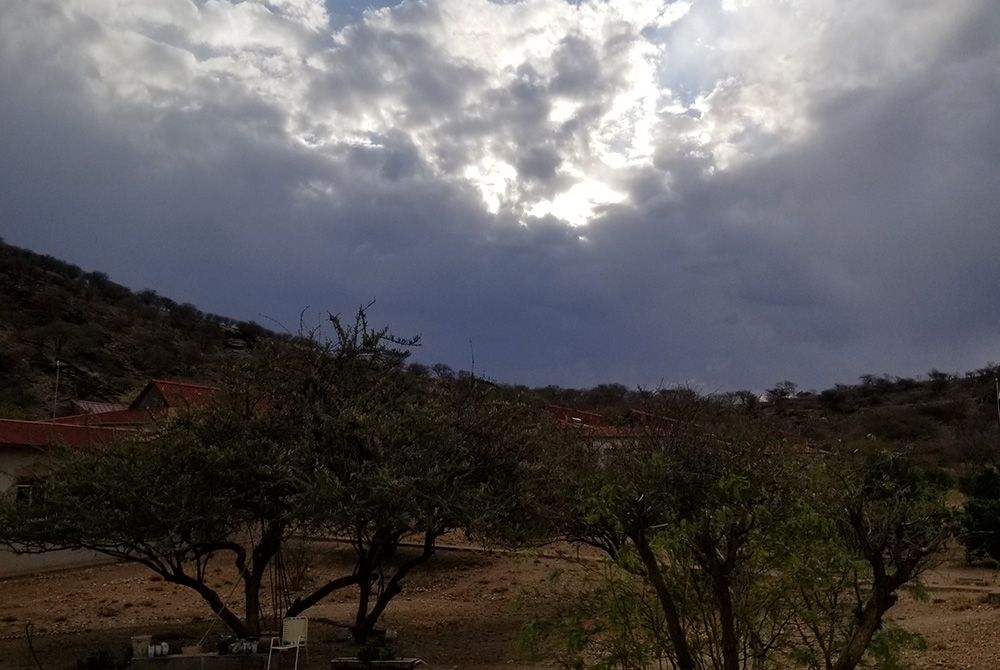 Clouds with a hope for rain in Namibia (Patricia Crowley)

Another morning and I wake
with thirst for the goodness
I do not have.
—Mary Oliver

As I look out my window at the very arid landscape of this water-hungry, drought-besieged land, I think about the thirst I am personally experiencing in this dry climate. I wonder how this relatively new nation has survived over three years of terrible drought.

Then I recall reading that these Namibians endured more than a century of colonial presence (Portuguese, Dutch, British, German, and finally South African) has well as the early 20th century genocide of one of its major tribes, and the stringent apartheid practices and fierce fighting of its final years before independence. Endurance and persistence eventually resulted in hard-won independence in 1990. Namibia emerged as a confident nation, plagued, of course, by threats of corruption, as is the case with nearly every new nation in our greedy world.

The Namibian people I have met are positive, happy and thirsting for so much. After Sunday Mass, at the Benedictine Priory where I am staying, I met a family whose one- month-old daughter was named "I am Happy," after she barely survived a difficult birth. That name epitomizes my initial sense of this land and its people. They are happy and they are thirsting.

Responding to an invitation from this Benedictine missionary community, I have come here to offer spiritual direction to young African Benedictine women who, along with their other community members, seem to be thirsting in the biblical sense, with strong spiritual desire.

When I would share with folks that I was going to Namibia for a year to do spiritual direction with young African Benedictine women, I would see disbelief in their faces. Then, they would ask quizzically: "Where are you going?" "To do what?" "At your age?" After all, I am not part of a missionary community, and I have always been very involved in social justice action and in service right here in Chicago.

When I received this invitation in 2016, I knew literally nothing about this part of Africa, nor was I, as yet, a trained spiritual director, and I was approaching the "fourscore" anniversary of my birth. However, as a Benedictine woman, I heard over and over again the first word of the Rule of Benedict ,"Listen," and so I did!

In 2017, as I completed my term as president of the Conference of Benedictine Prioresses, I began a two-year course in spiritual guidance (or direction or companioning) at the Siena Retreat Center in Racine, Wisconsin. I had hoped to do this kind of training for many years, but I responded, instead, to other invitations to serve. First, in a low-income community near our monastery; then, in an amazing shelter/housing program for women who had been homeless for long periods of time, in the city of Chicago — that ministry involved finding ways for service providers to collaborate as they served increasing numbers of people who were homeless. The next invitation came to serve in leadership in my own Benedictine community. Finally, I became involved in the traumatic reality of new immigrants seeking asylum in our country.

Because of the horrendous reaction to immigration in our own country today, I was torn, when I began to seriously consider this last invitation to come to Africa. I had just begun to work with the Interfaith Community for Detained Immigrants, or ICDI, in visiting detainees and doing court watch. Then there was the work I was just beginning with other sisters from Region 8 of the Leadership Conference of Women Religious. Eight other women religious and I, from various religious congregations, were opening Bethany House of Hospitality, to offer unaccompanied, immigrant minor girls an option other than adult detention on their 18th birthdays.

In a spirit of courageous collaboration and support, these women religious leaders agreed to give me a leave of absence from Bethany House so that I could respond to this new call to Namibia for a year. One of the joys of this time in history is the tremendous potential we, women religious, have to collaborate across congregations to do the gospel work that is so needed in our distraught and divided world. Bethany House of Hospitality is a superb example of that kind of collaboration.

But now here I am in the mountains of Namibia, living with a community of Benedictine Missionaries, and offering spiritual direction with their younger women in formation for a year. Right now, at this Priory house, we have 10 sisters in temporary profession, four novices, five postulants, and two aspirants. The community belongs to a much larger Benedictine congregation originating from Tutzing, Germany, now missioned all over the world with large numbers in the Philippines, South Korea, Brazil, and here in Africa — as well as houses in several European countries, and one in Norfolk, Nebraska. As in other Benedictine houses I have visited around the world, I do feel at home here.

Benedictine Sr. Mary Thomas Prado, the prioress who invited me here, had studied at Catholic Theological Union in Chicago and recognized, as so many have, the value of spiritual direction for women in formation. She began the process of searching for someone to come here when she was elected prioress five years ago. She clearly understood the thirst of the young members of her community here in Windhoek, Namibia.

My experience so far is that my own physical thirst is a mirage compared to the thirst of these young women for a solid spirituality that will carry them to the missions for which they long. My year has only just begun. My sense is that I will understand this thirst so much better in the months ahead.

[Benedictine Sr. Patricia Crowley is currently serving as a spiritual director for young African women of the Missionary Benedictines of Tutzing in Windhoek, Namibia.]