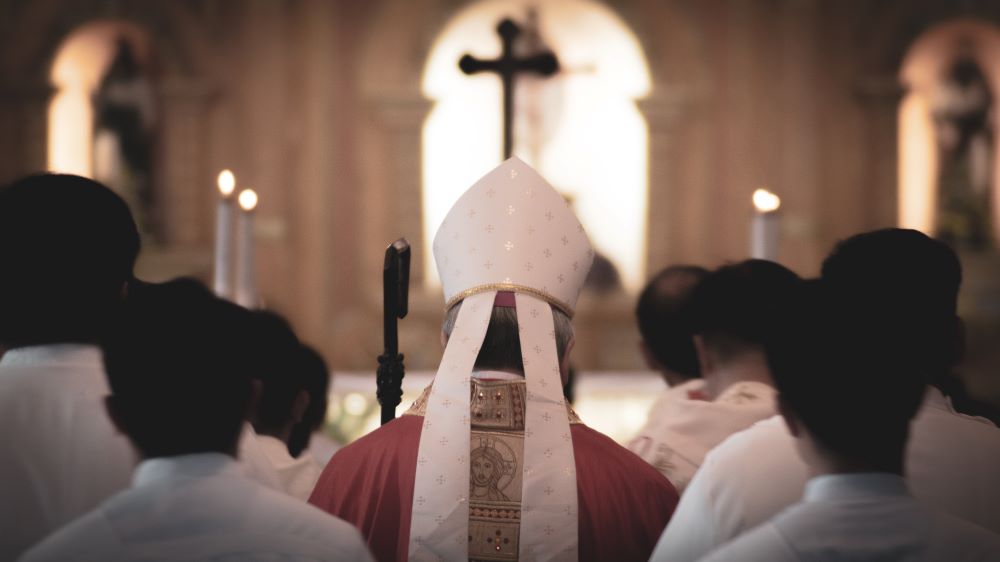 In a 24-page report, the religious groups said a consensus has emerged among the congregations about the need for change. A key concern is the need to end clericalism and develop a church "where all together welcome the leaders that the Spirit raises up."

The groups also call for an increased voice for women within the church.

Women "are silenced and prevented from promoting cultural change; and, if they express their ideas, they risk being excluded from their responsibilities and jobs," the report said. In another section, the report said: "The cry of religious women, unjustly treated, discriminated against, and even mistreated in the dioceses of some countries, is crying out to be heard and heeded."

It added: "Sexism in decision-making and church language is prevalent in the Church, especially in Africa and some other countries. As a result, women are excluded from meaningful roles in the life of the Church, discriminated against by not receiving a fair wage for their ministries and services. Women religious are often regarded as cheap labour." 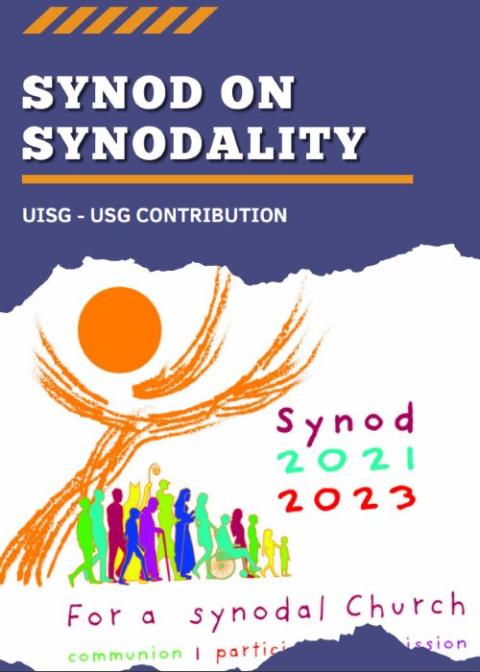 Francis is promoting the idea of an inclusive, synodal church more open to listening and embracing those on the margins in anticipation of a planned October 2023 synod on synodality.

The results of a survey of religious congregations were made during the May USG assembly and the July UISG online assembly. In all, 224 congregations participated, 169 female and 55 male.

In January, Cardinals João Braz de Aviz, prefect of the Dicastery for Institutes of Consecrated Life and Societies of Apostolic Life, and Mario Grech, secretary general of the Synod of Bishops, asked religious congregations to "reflect on the exercise of governance within institutes and the relations between the various institutes."

Both assemblies expressed "their identification with the results of the consultation," Sr. Nadia Coppa of the Adorers of the Blood of Christ, UISG president, and Jesuit Fr. Arturo Sosa, USG president, said in a recent joint statement.

In noting that there is a consensus for change, the religious groups said:

Religious are speaking with openness and courage about situations that must change if religious life itself and the wider church are to survive and flourish. They offer a vigorous self-critique as well as a critique of oppressive attitudes and practices within the wider Church that prevent religious life from achieving its full potential. They also speak out of their zeal and energy for the signs of hope in the synodal process that they find in every human context and corner of the world. They stress the urgency of action towards greater synodality while knowing that the onus for change falls upon themselves.

At a time when many are drawing attention to the structural diminishment of religious life worldwide, this document, which gives expression to the voices of the world's religious, shows that they have a significant part to play in promoting and living the synodal pathway to which Pope Francis has called the entire Church.

The document also praises initiatives already underway that demonstrate a more synodal approach as exemplified by Pope Francis. Among those noted is "the presence — albeit still a minority — of women in leadership and decision-making roles." One example, the report said, is the appointment of Sr. Nathalie Becquart as undersecretary of the Synod of Bishops.

The report said a "patriarchal and hierarchical model" is still prevalent within the church.

"Such a model favours clericalism and disregards the fundamental dignity of every baptised person. The historical — social and cultural — supremacy of the masculine considers the clergy as a race apart and motivates an arrogant and disrespectful treatment of the laity and prevents forms of collaboration and mutual relationship."

The report noted the problem of the "abuse of power at various levels and its persistence: parish priests who impose themselves as lords, without transparency or accountability to others; priests who take possession of the sacred, who do not respect parish groups and who demand obedience to their criteria." 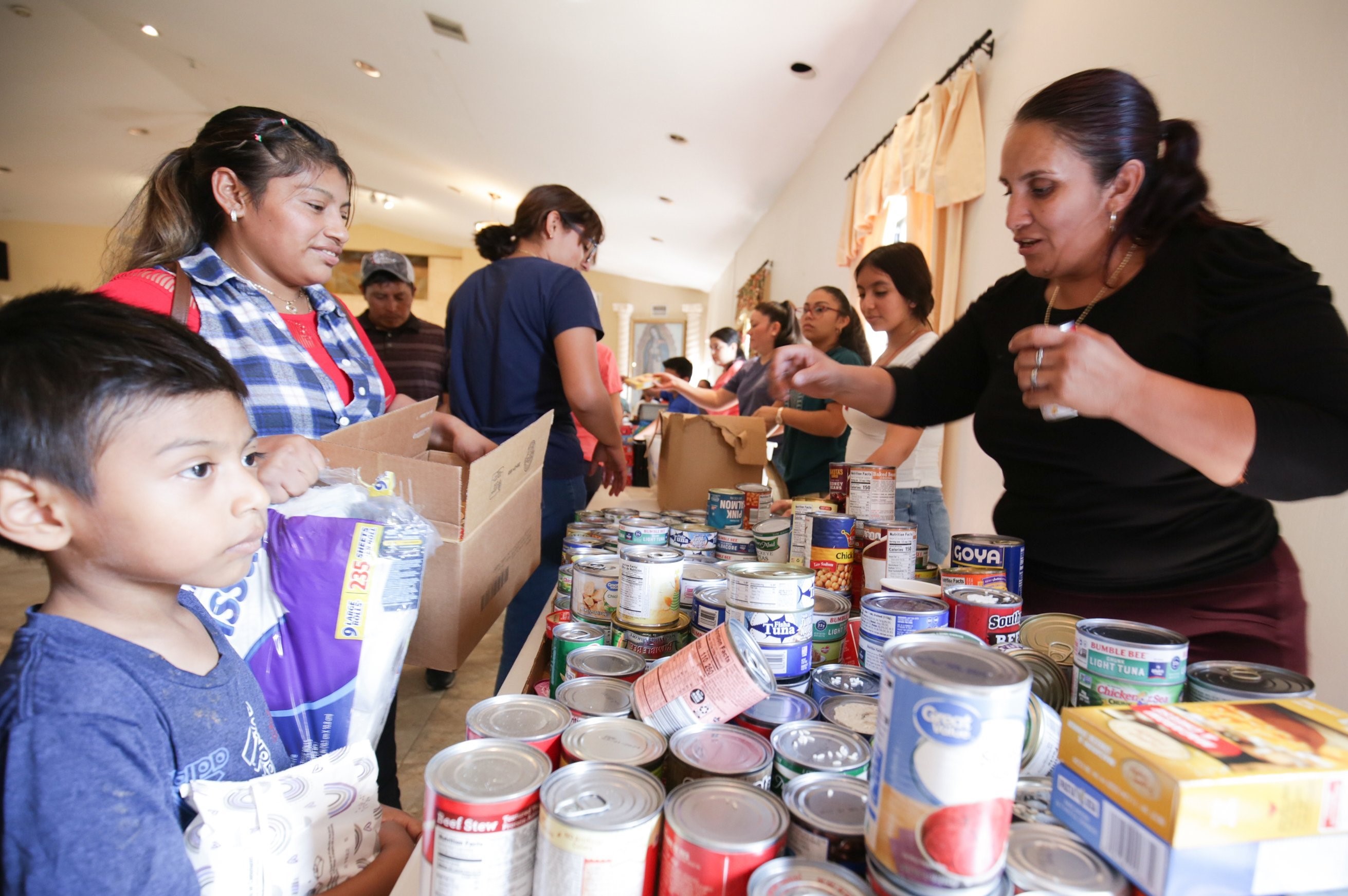 Volunteers and members of the local community distribute food at Jesús Obrero (Jesus the Worker) Parish in Fort Meyers, Florida, on Oct. 4 amid the aftermath of Hurricane Ian. (CNS/Tom Tracy)

'The invisible people' after Hurricane Ian

A sister who works with refugees and immigrants in Immokalee, Florida, says the farmworker community there survived the worst of Hurricane Ian because it is inland from the badly affected coastal areas of southwest Florida.

But like much of Florida, the community faces serious challenges. 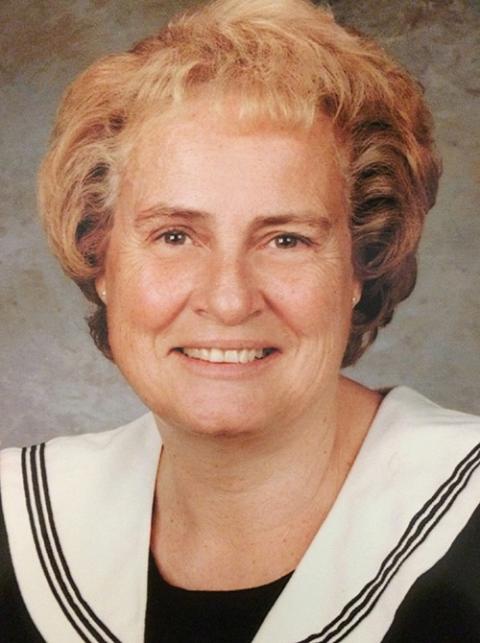 "Lots of wind, rain and no electricity for two days," Sr. Judy Dohner said in an Oct. 3 text message to Global Sisters Report. The problems will come later, she said: "Most of the tomato crop and oranges were ruined," which means seasonal workers now returning to Florida from northern states will find that "there won't be work."

"It's absolutely terrible," Dohner, a Sister of Humility of Mary from Villa Maria, Pennsylvania, said in a subsequent telephone interview. She said she is concerned "about the invisible people," such as those experiencing homelessness, who were not able to evacuate from affected coastal areas.

"They are still looking for bodies," she said.

The hurricane will affect not only agricultural workers but those with low-paying jobs in the hospitality industry, Dohner said.

She said the long-term effects are "massive," though she added that she believes those who experienced previous economic challenges have the fortitude and experience to face the latest challenges.

She said she and other sisters working in the region will help families requiring assistance.

Dohner returned to the United States in 2018 after ministering in Haiti for 16 years and is now working with Haitian and Latin American refugees and immigrants. She said the latest experiences have brought back memories of her experience during the massively destructive 2010 Haiti earthquake. 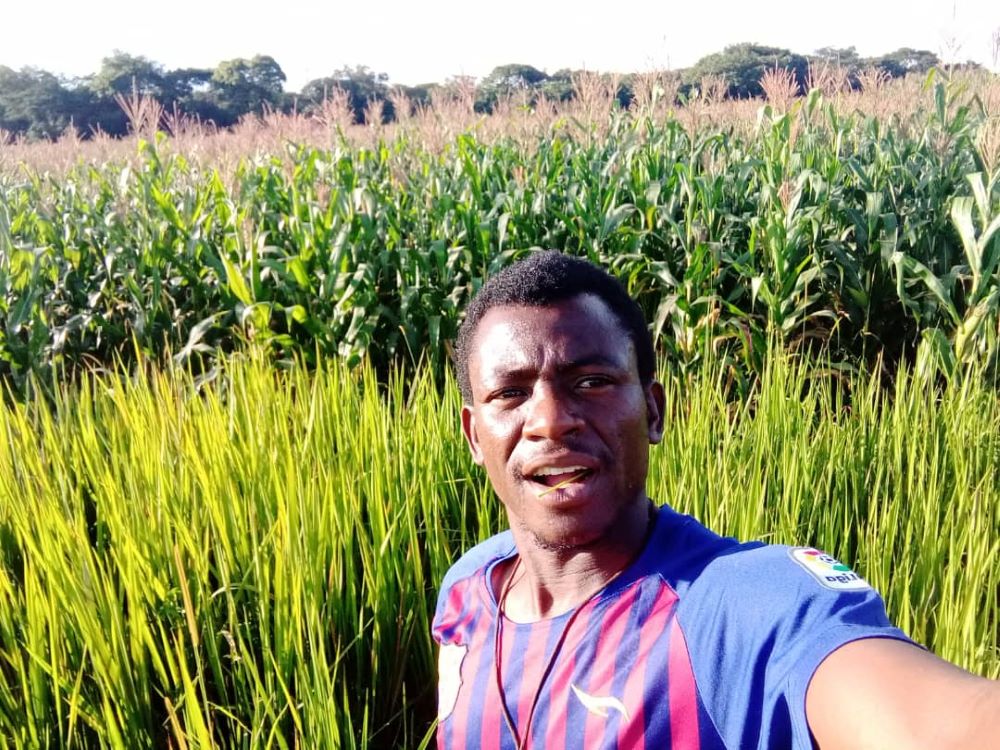 Wilondja Mayayu Luc is a young Salesian at Don Bosco Kansebula in Lubumbashi, Democratic Republic of Congo, and one of the beneficiaries of the farm that supplies food for the Salesian formation house and to the village nearby. He is in his third year studying philosophy and completed high school as a technician agronomist. (Courtesy of Salesian Missions USA)

Salesian Missions, the U.S. development arm of the Salesians of Don Bosco, is joining other groups in commemorating a series of days focused on humanitarian themes, including World Food Day on Oct. 16, which marks the creation of the United Nations' Food and Agriculture Organization in 1945.

In a statement, the Salesians, based in New Rochelle, New York, noted the day was "established to bring attention to the plight of the world's hungry and undernourished while providing an opportunity for a deeper understanding of the complex solutions for ending hunger."

This year's theme, the agency said, is "Leave no one behind" and "calls on everyone to build a sustainable world where everyone, everywhere has regular access to enough nutritious food."

In its statement, the agency noted that globally, as many as 828 million people go to bed hungry every night.

"The number of those facing acute food insecurity has soared from 135 million to 345 million since 2019, and a total of 50 million people in 45 countries are teetering on the edge of famine," the agency said, quoting the World Food Program, the other United Nations agency involved with food-related work.

"Salesians around the globe know how important healthy nutrition is for the children and older youth we serve in our schools and centers," Fr. Gus Baek, director of Salesian Missions, said in a statement. "Children can't focus on school when they are hungry, and those facing malnutrition often fail to thrive. Salesian feeding programs ensure that youth have access to nutritious meals to fuel their education, play, and connection with their families and friends."

Salesian Missions also has programs related to two other international days this month: Global Handwashing Day on Oct. 15 and International Day for the Eradication of Poverty on Oct. 17.

Salesian Missions is part of the Don Bosco Network, a worldwide federation of Salesian nongovernmental organizations. The mission of the group is to raise funds for international programs that serve youth and families. 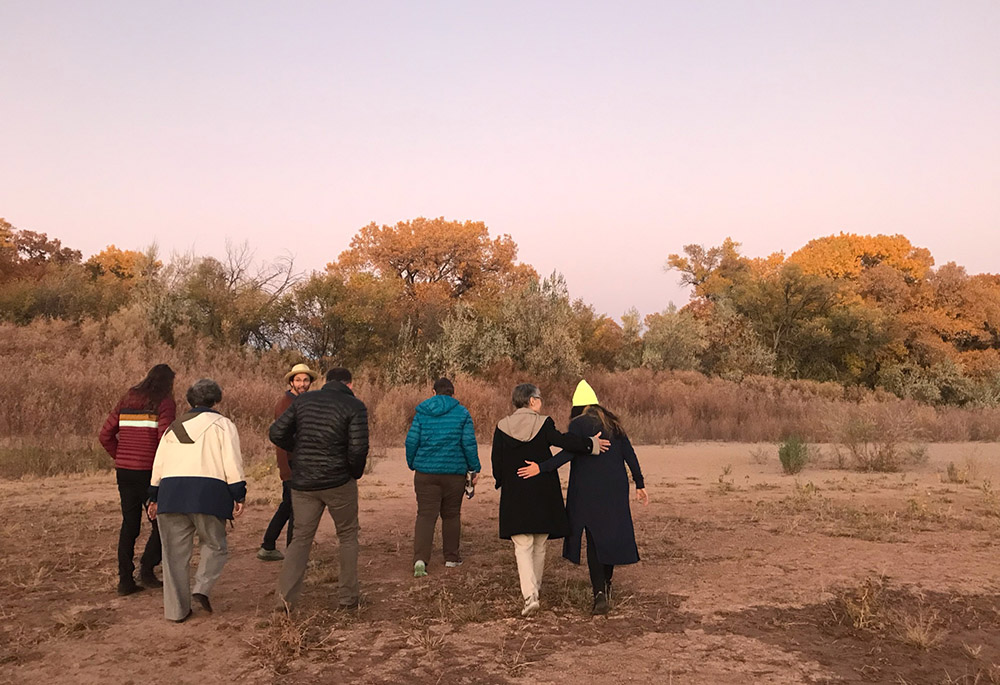 The Nuns and Nones team on the Rio Grande, October 2021 (Courtesy of Brittany Koteles)

The Nuns and Nones Land Justice Project, working with the Center for Ethical Land Transition, will present a "first-of-its-kind workshop" on Oct. 26 and 27, "Cultural Sensitivity for Land Justice Collaborations."

The two-part, two-day training "will focus on ways a community can approach collaborations with dispossessed peoples from a stance of solidarity and repair." This is particularly useful if a community is working with land stewards who are Black, Indigenous, or other people of color, the group says. Register here.

Nuns and Nones describes itself as "an intergenerational, spiritual community dedicated to care, contemplation, and courageous action in service of life and liberation."

The Sisters of St. Joseph of Brentwood, New York, have announced a six-month webinar-based symposium and lecture series to celebrate the 60th anniversary of the Second Vatican Council.

The series, "Re-Energizing the Renewal," is sponsored by the Spirit Alive Institute, the congregation's educational ministry. The purpose of the series is to "appreciate, celebrate, and deepen our understanding of the vision of Vatican II. The work of renewal is ongoing and needs to be re-energized by every generation," the series' website says.

The first event will be held at 7:30 p.m. Eastern time Oct. 11 with an introduction by Cardinal Blase Cupich, archbishop of Chicago, and will feature a lecture, "Vatican II: A Council That Will Never End," by Paul Lakeland, who teaches Catholic studies and is founding director of the Center for Catholic Studies at Fairfield University, a Jesuit institution in Fairfield, Connecticut.