Q & A with Sr. Mary Lou Specha, who turned her home into a Mardi Gras float 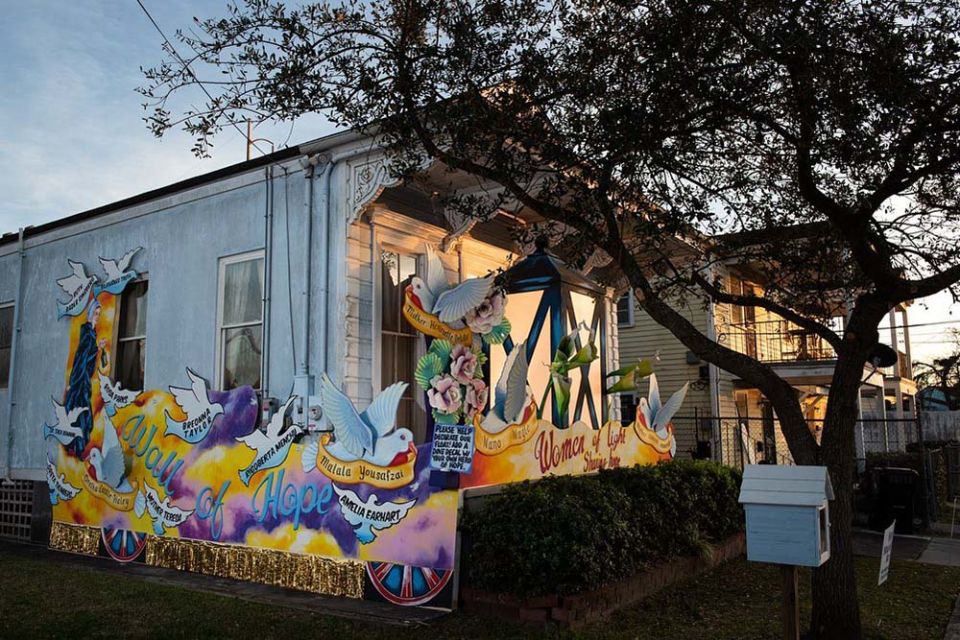 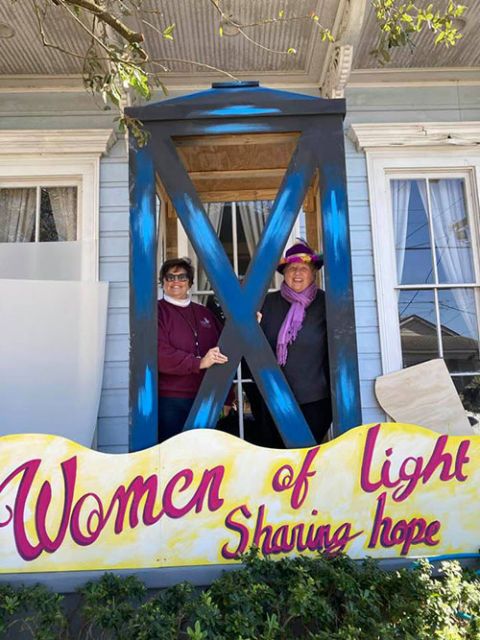 Presentation Srs. Julie Marsh, left, and Mary Lou Specha after their house was turned into a "parade float" for Mardi Gras in New Orleans (Courtesy of Sr. Mary Lou Specha)

Not the Mardi Gras celebrated in much of the United States with a half-hearted king cake and some beads, but the celebration that begins on the feast of Epiphany and continues until the last moments before Ash Wednesday begins. She loves the real Mardi Gras in New Orleans, where she lives and ministers.

Specha, a Sister of the Presentation of the Blessed Virgin Mary from Dubuque, Iowa, has lived in New Orleans for more than a decade. She is the executive director of Hotel Hope, which provides short-term emergency housing for families experiencing homelessness. Specha's roommate, Presentation Sr. Julie Marsh, is director of operations at Hotel Hope.

Because of the pandemic, the Mardi Gras crowds, the parades, the bands have all been canceled. Which means that the artists who build and decorate floats — a small industry in Mardi Gras-crazed New Orleans — were out of work. Then someone had the idea of decorating houses to create a stationary parade all over the city, which would not only bring back some joy in these dark days, but put float artists to work.

Specha signed up and set up a GoFundMe page to raise the $10,000 needed to decorate their shotgun house, which is next to an empty lot, allowing the side to be decorated, as well. The fundraising started Dec. 10 and was fully funded by Jan. 1.

On Jan. 29, the crew came and assembled giant wooded set pieces around the house, making it look like a float with a decidedly Presentation aesthetic.

GSR: You must really love Mardi Gras to turn your house into a parade float.

Specha: I'm a fan of Mardi Gras, but I'm more about trying to help people in need. That's what this is really about. It's a way we can help the artists recover some wages. The idea came from Julie. She said, "I wonder what it would take." 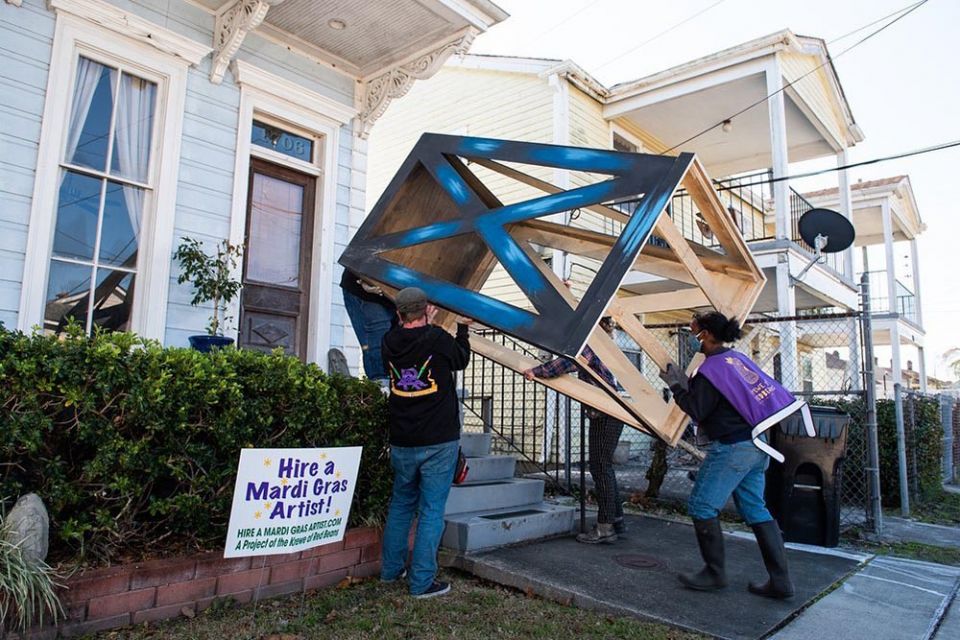 Mardi Gras is a season. It's really about celebration and families. I've been going to the parades every year for 10 years. It's a chance to see people you haven't seen since the year before. It's pretty diverse cultures and economic classes all together. We stand and sit shoulder to shoulder and reminisce and talk about what's going on and talk about our families. We celebrate family and food and culture and our city.

Most people think of parades as one big event through downtown. But this sounds like many small parades going through neighborhoods — a much more intimate experience.

Yes, the parade route is about 5 miles long. It starts in a pretty upper-class neighborhood and goes through the whole city, ending downtown in the business district. And we don't have just one a night; we have three or four parades a night or afternoon. Every parade has a theme and signature things they throw.

You don't sit in a chair and just watch. These parades are interactive, and you try to get as many beads and trinkets as you can. If you ever want to feel like a rock star, ride on a parade float because everyone's screaming at you.

It's a chance for everybody to be creative. Everybody dresses up — hat, mask, wig. Nothing is off-limits. 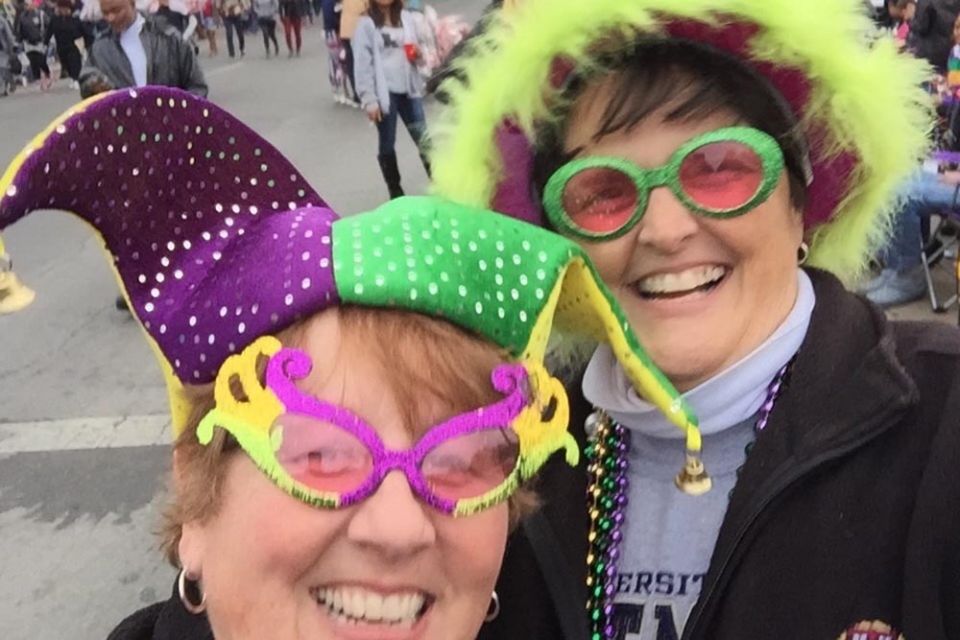 Sometimes people think it's a drunken fest, that it's a big party. It is a big party, but I have never seen anyone in our area that's drunk. It's about the kids, cousins and neighbors and all cultures. It's a real festive time.

Tell me about your "float" they created.

We wanted to portray our religious community. The lantern is a symbol, especially since these days of COVID-19 have been so dark. We wanted to capture the idea that even in darkness, there is light, and certain women have brought light through the centuries.

It features Presentation Sisters foundress Venerable Nano Nagle, plus all these other women who have brought light to the world, such as Mother Teresa, Sr. Thea Bowman, [Swedish environmentalist] Greta Thunberg and Malala Yousafzai [a Pakistani advocate for women's education].

With this project, they were able to employ over 25 artists and pay them a living wage. 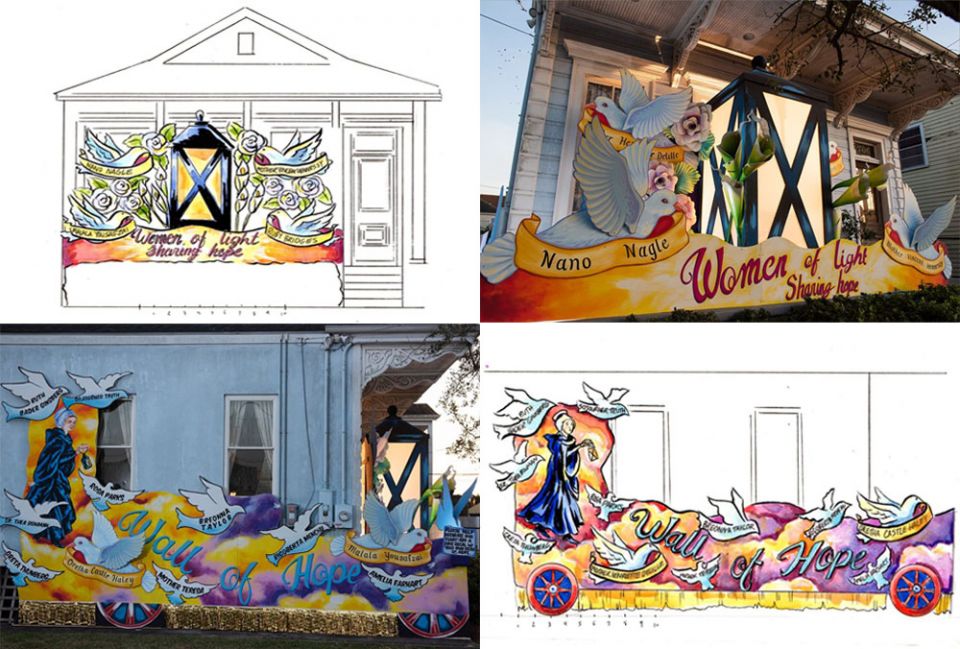 Artist's renditions of what Presentation Srs. Mary Lou Specha and Julie Marsh's New Orleans house would look like after decoration for Mardi Gras, and photos of the completed "parade float" (Courtesy of Sr. Mary Lou Specha)

So people will be able to walk or drive by your house as if they're at a parade?

Where we live, in Central City, we have a lot of foot traffic. It's a poorer neighborhood, so people walk a lot. We plan on having a couple of nights where we're going to invite people who supported us on GoFundMe. There's also a big group of sisters that we always get together for the parades; we want to invite them over. We'll figure it out. We're going to find ways we can engage people, like throwing trinkets from the porch.

How did the designers feel about the theme you wanted?

We met with a couple of the artists and told them about our ideas and our religious community. One went and did all this research on her own about Nano Nagle, and when she came back with the drawings, she said she was just absolutely inspired by her. So she's still evangelizing after all these years.

We're really excited in how this has helped the community. The artists are the life of the city — in a lot of the parades, they'll have the artist ride on a float. I always appreciate what they do because of the two things I love: one is the floats, and the other is the bands, the music and the art.

Arts and Media | Q & A with Sr. Mary Lou Specha, who turned her home into a Mardi Gras float

Sr. Thea Bowman expected to be approved for sainthood path

Q & A with Sr. Dorothy Hall, feeding Harlem's hungry as the pandemic continues

The view from Cook Islands in the South Pacific, so far COVID-free