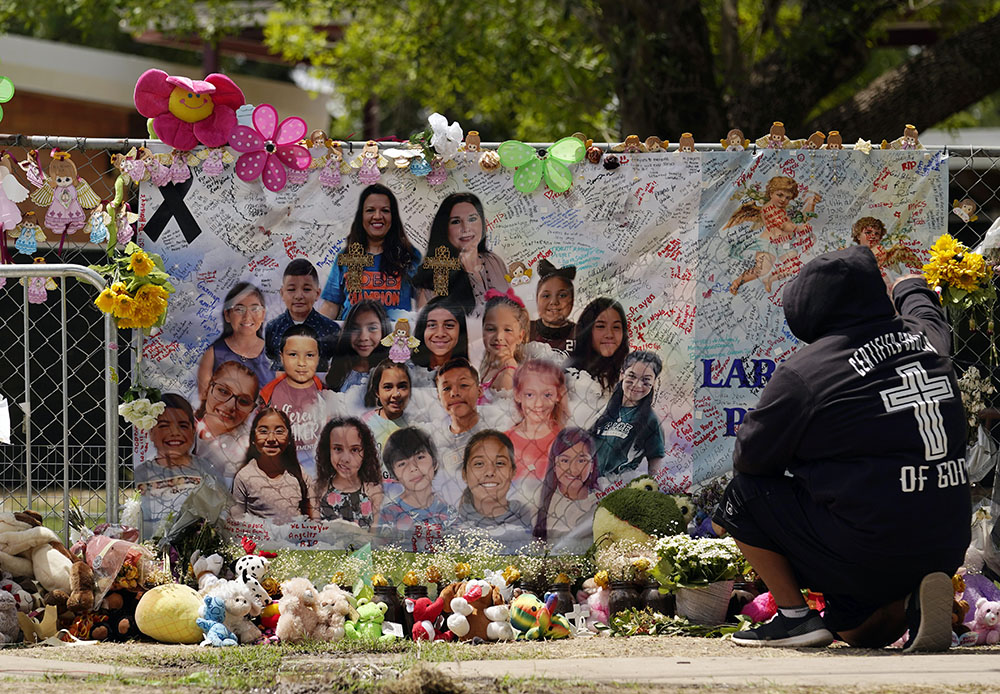 A mourner stops to pay his respects at a memorial at Robb Elementary School June 9 in Uvalde, Texas. The memorial was created to honor the two teachers and 19 students killed in a mass shooting at the school on May 24. (AP/Eric Gay, File)

From my days as a Catholic elementary school student, I recall the face of the beautiful child with blonde curls on our Catholic calendar marking the feast day of the Holy Innocents on Dec. 28.

Ursuline Sister Mary Robert, my third-grade teacher, told us that Holy Innocents was a feast day to remind us that God especially loved children. Since A.D. 485, Holy Innocents has been marked as an official feast day in the Western church to celebrate the children who were the first martyrs, killed by King Herod — who was known for his paranoia and cruelty.

When I entered the Cleveland Ursuline novitiate in 1965, we looked forward to Holy Innocents as the feast day we were "allowed" to roller skate on the loading dock, which had smooth cement flooring!

As a John Carroll University graduate student, I became familiar with Raymond Brown's book The Birth of the Messiah: A Commentary on the Infancy Narratives in the Gospels of Matthew and Luke. Brown discusses the complexity of determining the historicity of these infancy narratives in Matthew and Luke. He explains that the authors used the narratives to convey a religious, rather than historical message regarding Jesus' identity and how the early life of Jesus echoed the history of Israel.

However, Herod, king of Judea, is an authenticated historical figure, ruler, and builder of the Second Temple in Jerusalem. Herod was known as a cruel and vindictive leader who killed his own family members. In today's parlance, Herod might be called a "shooter."

Now, as I frequently drive the road to our Ursuline motherhouse, I pass Lander Elementary School in Mayfield Heights, Ohio. From May 24 through the end of June of this year, the school walkway in front of the building had 21 chairs set up in a row with photos of 19 children and two teachers killed by guns in Uvalde, Texas. I could not ignore the photos; the faces of the children were a constant, unrelenting, "in your face" testament to the plague of gun violence in our country.

According to the Southern Poverty Law Center website, there are currently 733 hate groups operating in the United States. Also check the Gun Violence Archive, based in Washington, D.C. It listed the following U.S. statistics for 2022, as of Dec. 22:

As part of our Christmas celebration, we may be able to find the time to confront gun violence by following one suggestion from the Center for American Progress, a nonpartisan policy institute that deals with social justice issues in the United States, which suggests the following:

When we hear the Christmas songs on YouTube, radio and TV — songs like "Christmas Was Meant for Children" — let the songs remind us that it is up to us to reduce the level of gun violence in our countries, for the sake of our children, the Holy Innocents.

Do your part to end gun violence!

Or find out about the organizations like that in your country that deal with suffering inflicted on the innocent. Child marriage? Child labor or trafficking? Female genital mutilation? This is a good season to remember all our Holy Innocents!