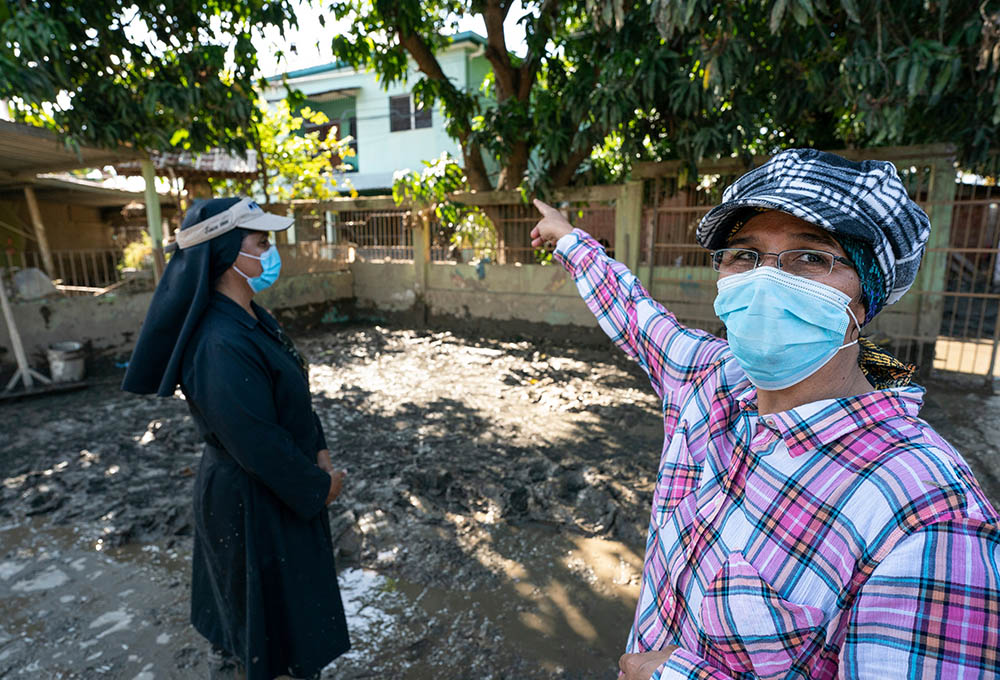 Srs. Milena Vanegas, left, and Victoria Emérita in the mud-covered playground of the nursery school they operate in La Planeta, a neighborhood of La Lima, Honduras, in late January. Hurricanes Eta and Iota in November 2020 flooded their facility and the adjacent church, forcing their evacuation from the second story of their convent home. (Gregg Brekke)

Watching the waters lap at the top of the stairs leading to the second story of their convent home in the La Planeta neighborhood of La Lima, Honduras, Srs. Victoria Emérita and Milena Vanegas of the Sisters of Charity of Santa Ana knew they were running out of time and options.

The protective levees surrounding the town had been breached earlier that day, Nov. 5, and a wave of water swept through town in an instant, brought to La Lima by Hurricane Eta, which made landfall the day before. Even after the initial surge from the broken levees, flooding worsened as heavy rains pelted their submerged neighborhood.

Now, with water rising as high as 12 feet, the sisters prepared to evacuate into their attic on a ladder set up next to the access door. Fortunately, that wasn't necessary: A rescue boat arrived around 6:30 that evening, and the sisters were able to pry apart two security bars on the second-floor balcony, slip through the narrow gap, and slide down the patio roof into a waiting boat. 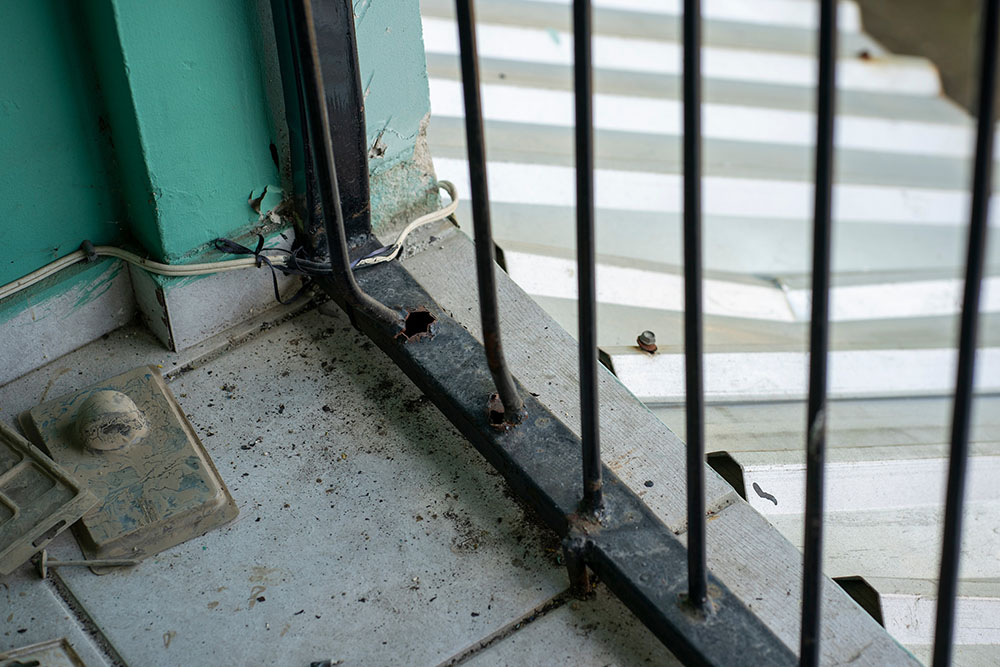 Srs. Victoria Emérita and Milena Vanegas broke the welds on two security bars of their patio and spread them apart to get to waiting rescue boats in La Planeta, a neighborhood of La Lima, Honduras. (Gregg Brekke)

"We could see everything had already been lost," Emérita said, surveying the mud from the balcony of their home in La Planeta in late January. "We were worried for ourselves, yes, but when the boat came, we knew our prayers had been answered."

The boat transported the sisters to the higher ground of the highway running through town. Because of the damage to their home, the sisters first relocated to a private home and now live in a retreat center dormitory in nearby San Pedro Sula.

However, Eta was only the first of two major storms: Hurricane Iota followed two weeks later, Nov. 18, as a Category 4 storm, soaking this low-lying town in northeastern Honduras next to the Chamelecón River and resulting in further damage to the Our Lady of the Holy Fountain Nursery School that the Sisters of Charity of Santa Ana run and to the adjacent church.

The storms affected an estimated 4.7 million people and resulted in more than 100 deaths. At least $5 billion in property damages was sustained during the storms and subsequent flooding, one-fifth of Honduras' gross domestic product. The total economic impact from the storms is estimated at $1.86 billion, including losses of 80% of the annual sugar cane, cacao and banana harvest.

The sisters have tried to set a good example throughout the pandemic and hurricane recovery by wearing masks and encouraging others to do the same, observing distancing protocols, and advocating for testing and isolation from infected people. But for the poor residents of La Planeta struggling to rebuild their lives and livelihoods, these safety measures are often secondary to daily survival.

Providing help amid their own recovery

Months after the hurricanes, La Lima and the church property are marked by devastation. Although floodwaters receded by mid-December, the streets are still a muddy maze of makeshift paths and mud piles cleared from inundated homes. The mucking continues, shovelful by wheelbarrow. Some heavy machinery is present, with excavators and dump trucks clearing debris already removed from buildings where the deluge deposited 3 to 4 feet of mud. 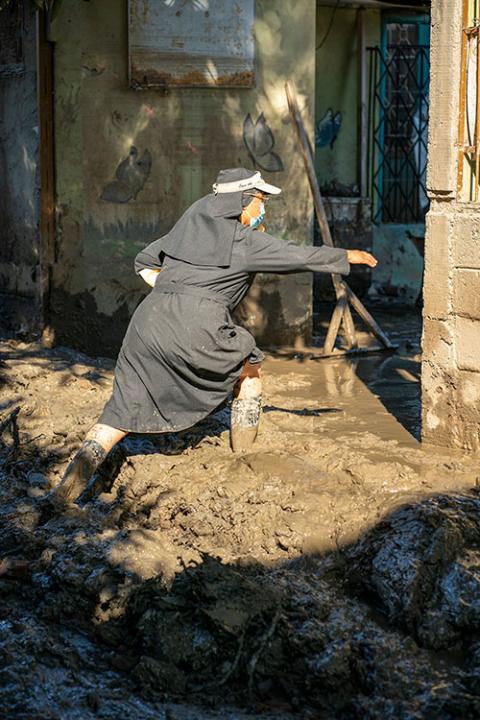 At Our Lady of the Holy Fountain Nursery School, the flooding waterline is visible at nearly ceiling level, stopping at the neck of Jesus in a painting hanging over a doorway. Although the mud has been removed, the school's rooms are piled full of salvaged equipment, such as cribs and toys. Most everything else at the school, church and convent is a total loss. The school's kitchen and bathrooms will need to be redone, walls scrubbed and repainted, electric equipment and wiring repaired or replaced, and plumbing recertified for potable water.

The sisters continue to clean and prepare for an engineer's evaluation on the soundness of the structures, which have several cracked walls, destroyed doors and buckled sections of flooring. They don't yet know when their 35 students can return to the nursery school.

"At the moment, we don't know the costs," Emérita said. "The financing of the repairs is going to be quite difficult, and we will look for help since the nursery school by itself is not self-sustaining due to the type of population we serve.

"We are looking at the situation and asking God for his wisdom."

Even as progress continues to restore the school, church and convent to their pre-hurricane states, the sisters are engaged in hurricane relief efforts for people affected in the area. Although displaced themselves, Emérita and Vanegas are coordinating efforts with local parishes to sort and distribute donated clothing, food and home furnishings to people who lost their homes and belongings in the storms.

Working out of two rooms piled floor-to-ceiling with donated goods at the Mhotivo Foundation in San Padro Sula, volunteers from nearby St. Peter and Paul Parish organize the items, preparing bags for Fr. Fredy Valdiviezo to pick up and distribute to local shelters housing hurricane victims. It's a herculean effort, with thousands of items still coming through the doors each day: mattresses, bedding, cleaning supplies, food, propane tanks and more.

But the sisters know these physical provisions are only the beginning of the needs that have to be addressed in La Planeta.

"There are many health needs that result from this situation," Vanegas said. "Sanitation is a big issue because there's no plumbing, and the water is not good, the floors are still dirty, human and animal waste is in the water, and diseases — especially skin and eye diseases in the children — are spreading quickly."

The children's mental health and well-being is also a concern for the sisters as students endure an extended time of isolation, lack of structure and instruction, and limited recreational activities. Even though the pandemic forced the nursery school to close in the spring of 2020, they are still in contact with the children and their families. They were often the first line of communication in the search for missing family members following the hurricanes.

"We've been there for the people of this community consistently," Vanegas said of the 22-year mission of these two sisters in La Planeta. "People were happy to see us and called us for information. Some were looking for information; others continue to ask when the day care will be open. Mostly, we feel we have been able to offer strength and hope, so people don't give up in these difficult times."

To the north of San Pedro Sula, in the López Arellano section of the manufacturing town of Choloma, Missionaries of María Inmaculada sisters who operate the Virgin of Suyapa Center vocational and primary school shifted their mission after the hurricanes and opened the gates of their property to displaced families.

Nearly 100 people found refuge inside the convent by late November, occupying classrooms and a building originally intended to house single mothers. The classroom kitchen was repurposed to cook meals; an outdoor pavilion provided covered storage for people's personal and household items. The soccer field and playground provided some outlet for children. 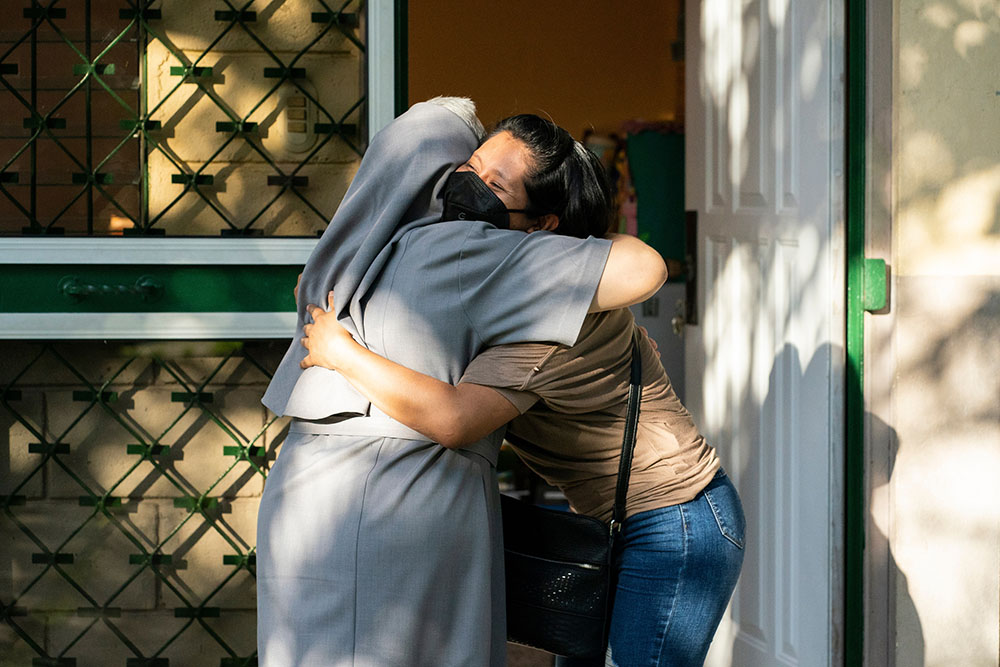 People returned to their homes by Christmas after the floodwaters receded, mud was removed from dwellings and basic repairs completed. But these families, who primarily work in nearby clothing factories, still face extreme poverty, rudimentary shelter and poor sanitation.

Part of the Missionaries of María Inmaculada's 22-year mission here has included providing training opportunities for people who can no longer work in the factories because of injury, age or preexisting conditions. The vocational training includes cooking, baking and a specialty in dessert creation, along with training in tailoring and cosmetology.

A few of the sisters operate a day care in another neighborhood of Choloma, and they opened a primary school there in 2016, when those families requested better education opportunities for their children.

Sr. María San Martín came from Guadalajara, Spain, in 1999 to help establish the Virgin of Suyapa Center. She said the school's closure since the beginning of the COVID-19 pandemic has been a hardship to students of all ages, as few have access at home to a computer or the Wi-Fi needed for online instruction.

A few small instructional gatherings have happened for students, and San Martín said the sisters have attempted to offer some online classes, "but our students are very poor. They don't have the means to continue in virtual classes, so we are fighting for them." 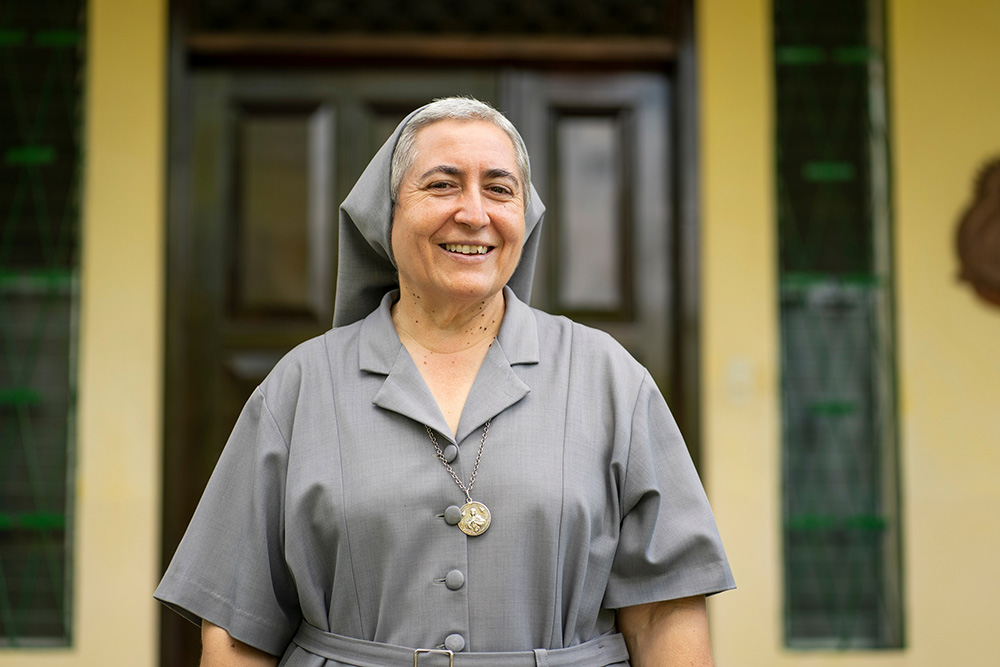 Plans to restart instruction with five students per class in the spring are being proposed, but current COVID-19 restrictions that prohibit in-student instruction in Honduras may prevent even this work from going forward. San Martín said the Honduran government requires fewer restrictions in some areas than others based on the rise and fall of confirmed COVID-19 cases, so some people believe the sisters aren't interested in restarting instruction in Choloma, although San Martín said they would if they could.

In spite of the difficulties they have faced and those in front of them, the sisters find hope in the service and collective help offered throughout their communities and from around the world.

"People are caring and showing support, and I pray they will continue giving that support because it feeds our hope," Emérita said. "Going back to our home is also our hope. Supporting people gives me hope, the children give me hope. At the same time, it breaks my heart to see how much has been destroyed and to see people seeking to leave Honduras, that they have given up."

"But where are they going to live now?" Vanegas said. "It's a hard choice to move from there because the people who live there, those we've always helped for 22 years, don't have anywhere to go.

"So we will stay, and that's my faith. Even if I stay here in this mess, God knows we are here and God is our strength."