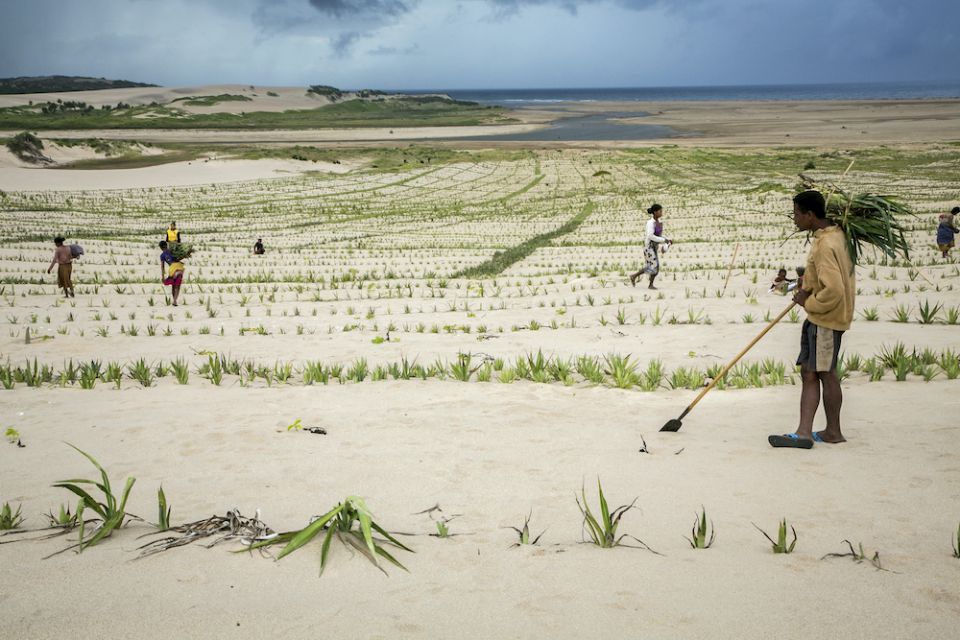 Community members plant sisal on sand dunes to stabilize them and keep them from blowing and moving onto the farm land near the village of Anjongo, Madagascar, March 22, 2019. As acute hunger is expected to double in vulnerable populations because of the coronavirus pandemic, CRS launched an advocacy campaign May 14, 2020, to raise awareness about the world's hungriest people. (CNS/Catholic Relief Services/Jim Stipe)

Cleveland — As tens of millions more people are at risk of acute hunger because of the global coronavirus pandemic, Catholic Relief Services is embarking on a campaign to raise awareness, advocate and raise funds to head off the brewing crisis.

Called Lead the Way on Hunger, the effort will address how the agency and the Catholic Church worldwide is responding to the needs of the people who are unable to access sufficient amounts of nutritious food.

"There's an urgency right now," Sean Callahan, CRS president and CEO, said in introducing the campaign during a teleconference May 14.

He said millions of people cannot afford nutritious food because they have been out of work since the start of the sweeping pandemic, while others are unable to purchase seed as the planting season begins in many parts of the world.

Citing a World Food Program report that projects more than a quarter billion people — nearly double the current amount — will experience acute hunger by the end of the year, Callahan said the church is called to respond to the needs of "our brothers and sisters" who are facing a crisis.

The Global Report on Food Crises 2020 said 265 million people in low- and middle-income countries face a severe threat of hunger unless the world swiftly responds to the pandemic. Currently one in nine people, about 135 million, experience acute hunger.

Callahan said while there may be plenty of food around the world, access to it is being severely restricted because of the pandemic.

"Pope Francis has called all of us to respond," Callahan said. "He said we have two choices: Turn inward or reach outward and be open outward. The church is on the front line right now. As you know, the church never closed. It didn't stop assisting in the U.S., it didn't stop pastoral outreach and it didn't stop overseas."

The campaign is being introduced as the church observes the fifth anniversary of Pope Francis' encyclical "Laudato Si', on Care for Our Common Home," which focused on the environment and the relationship of human beings to each other and creation.

During the teleconference, Daniel Mumumi of CRS Sierra Leone described how such a framework functions to bring food in response to food insecurity among children.

CRS coordinates a program that provides meals to 50,000 school-age children and 1,500 teachers in 300 communities across the West African nation, Mumumi said.

"They come to school without breakfast and no guarantee of dinner," Mumumi explained. "Through the program, they are able to get nutrition and food."

The pandemic has worsened poverty for thousands of families in Sierra Leone, he said, comparing the current crisis to the one caused by the Ebola epidemic that rocked the country for 18 months beginning in December 2014.

"In this part of the world, there is a strong correlation between poverty and hunger," he said.

Archbishop Bernard A. Hebda of St. Paul and Minneapolis, a member of the CRS board of directors, told teleconference participants the campaign serves as "an important experience of our church's steadfast commitment to global solidarity, commitment to the common good and upholding human dignity."

"The campaign is animated by the call to see Christ in the needs of our brothers and sisters," he added. "Jesus' call is a call to work to alleviate suffering, to create a more just world for the world's poorest, most marginalized and most vulnerable people. This campaign is one of the expressions of our outward response to Christ's call."

CRS, the U.S. bishops' overseas relief and development agency, continues to seek funding from the U.S. government to address hunger around the world. Callahan said it is advocating that $12 billion be included in another emergency aid bill being considered by Congress.

The CRS leader also said that some may question providing overseas aid when millions of Americans are facing food shortages at pantries and food distribution sites nationwide.

Not responding to people in needs could create greater problems, he said, and lead to widespread outbreaks of diseases such as measles, creating greater health concerns for the world.

"We need to ensure all people are protected," Callahan said.

He added that the pope's encyclical answers that call and offers Catholics an opportunity to understand their relationship to God's creation as well as to people around the world whose human dignity is suffering because of hunger, poverty, natural disasters and damage to the environment.

Callahan invited Catholics to join a day of prayer May 24 that will mark Pope Francis' signing of his encyclical. The prayer at noon local time concludes Laudato Si' Week, which is sponsored by the Vatican Dicastery for Integral Human Development.

The campaign is expected to continue at least through 2021. "Hopefully the success of it will allow us to focus on another concern," Callahan said.

Related: World hunger is its own pandemic: Aid workers brace for second-wave crisis

Sisters in Eritrea struggle with impact from evictions, hospital closings

Nuns on the Bus 2018: Caring for the least of these in the Carolinas

As new administration settles in, sisters have hope in Biden's character and Catholicism