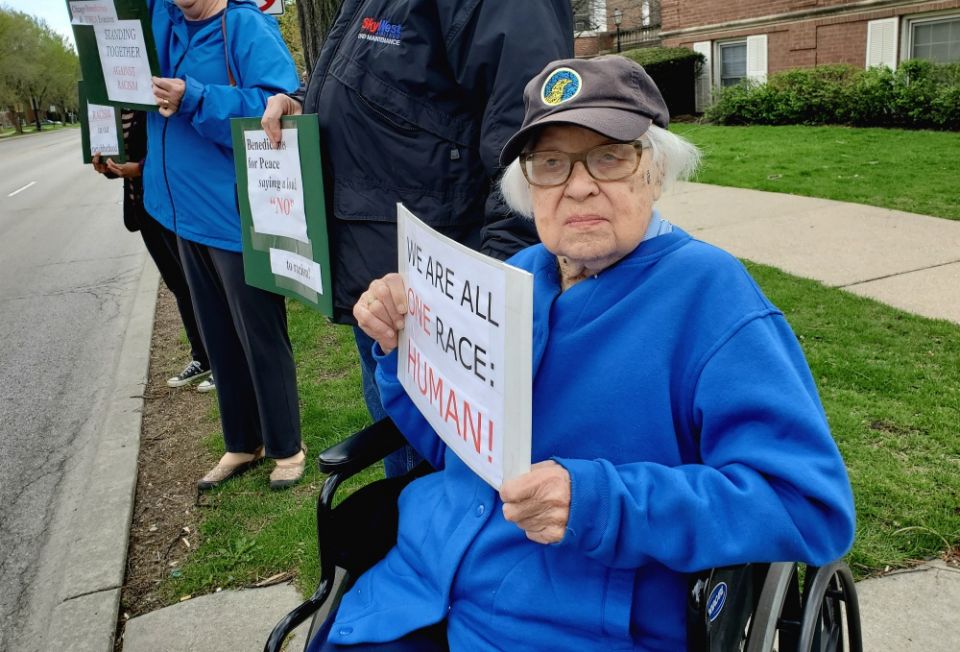 For Sr. Vivian Ivantic, these times are not unprecedented.

Ivantic was born in 1913, five years before the Spanish flu pandemic that began in 1918. Now, the Chicago Benedictine can add the novel coronavirus to the deadly illnesses she has escaped.

The 1918 pandemic infected an estimated 500 million people — about one in every three people on Earth — and killed at least 50 million, including about 675,000 in the United States, according to the Centers for Disease Control and Prevention.

About 30 million people have been infected with COVID-19, the illness caused by the coronavirus, and more than 820,000 have died, according to numbers tracked by Johns Hopkins University. At least 178,000 people have died in the United States.

Ivantic had COVID-19 in April and recovered. Fortunately, her symptoms were so mild, she thought she just had a cold.

"I think I'm too old to be set back very much," she said. "I've been very, very fortunate." 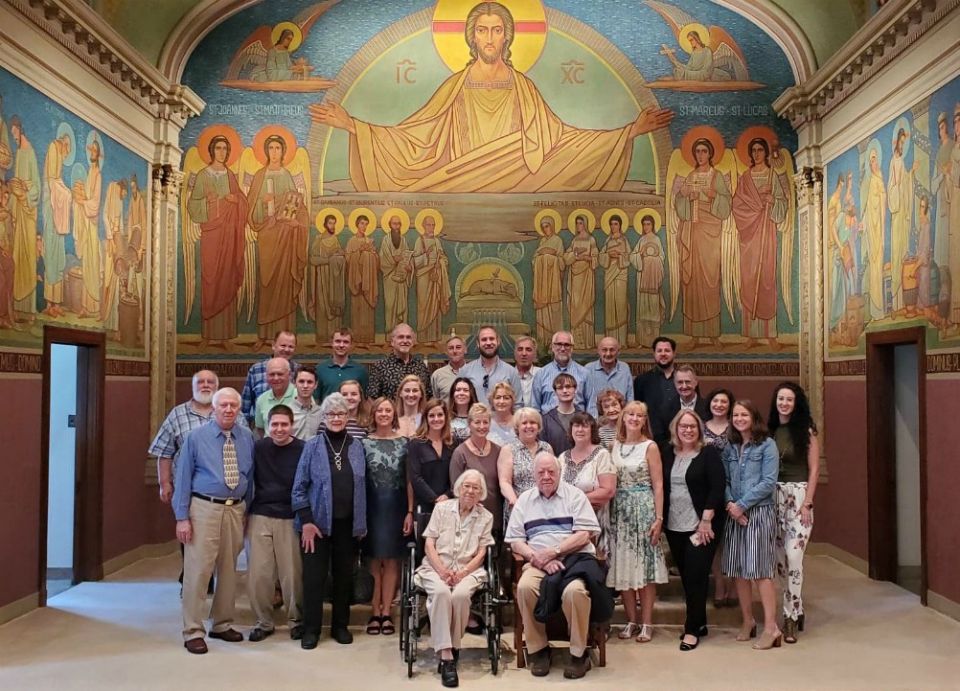 Chicago Benedictine Sr. Vivian Ivantic, front row, sits with her brother Bill Ivantic in front of her family after a Mass at St. Scholastica Monastery to celebrate her 106th birthday in 2019. (Courtesy of the Benedictine Sisters of Chicago)

"I was born on the feast of St. Augustine," she said. "I was always so grateful they did not name me after him."

Many centenarians attribute their longevity to a shot of whiskey every day or some other habit, but not Ivantic.

"We don't serve whiskey," she said of the St. Scholastica Monastery, where she lives. "People have wine once in a while, but the whiskey's pretty short."

Ivantic grew up in north Chicago and joined the Chicago Benedictines when she was 19.

"I always wanted to [join]," she said. "In first grade, I said to my mother, 'That's what I want to be.' I just never thought of another kind of life."

Her first-grade teacher, Sister Adelaide, would later become her superior. 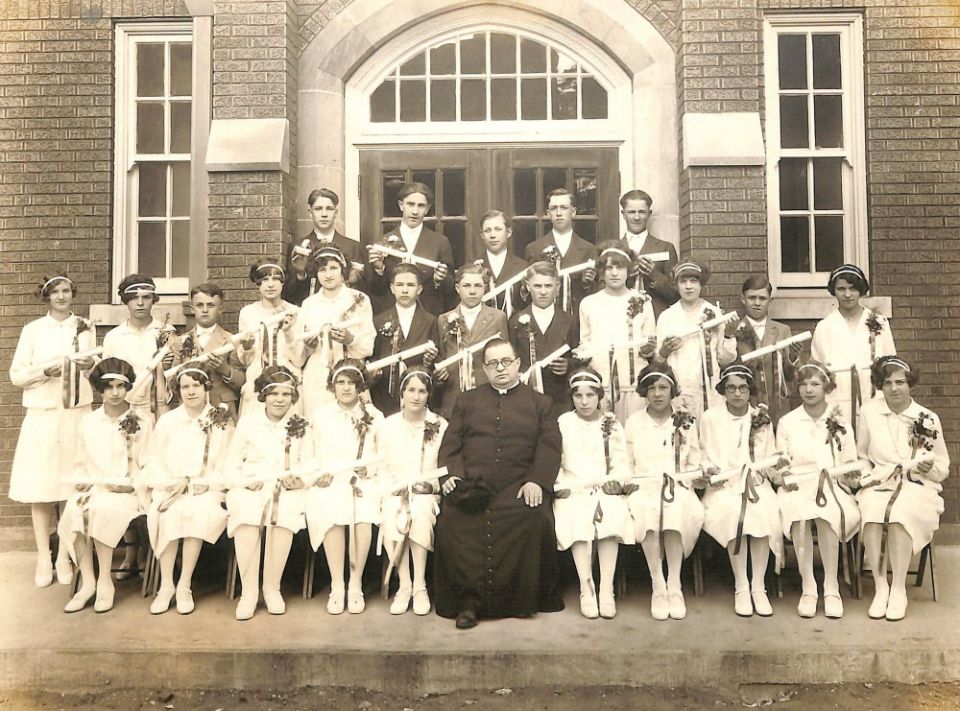 Chicago Benedictine Sr. Vivian Ivantic (front row, fourth from right) at her eighth-grade graduation from Mother of God School in Waukegan, Illinois, in 1927. (Courtesy of the Benedictine Sisters of Chicago)

Most of her career was spent as a teacher, librarian and archivist.

"I've done lots of different things. I taught from Grade 3 on, including teaching Latin in high school. I've been a librarian, you name it," she said.

She needs assistance to walk now and uses a wheelchair when she goes outside to feed the squirrels. She appreciates retirement.

"I take naps now, which I couldn't do earlier," Ivantic said. "People take good care of me."

With almost 11 decades under her belt, has she seen many changes in religious life?

"Definitely. Right now, I'm wearing pants," she said. "That was most unusual for religious women when I entered. We had these long, black robes, and you had to be careful when it was muddy."

She was from a family of nine children, but in World War II, two of her four brothers were killed within a week of each other. Now, her brother Bill is her only living sibling.

"I know how carefully my father worked with my mother to go voting," she said. "I was small, but I knew something was going on. He was encouraging her to go."

As a librarian in the 1970s, Ivantic learned about "talking books" — at that time, they were records — and immediately saw the possibilities.

"There was a sister who lost her eyesight, but she loved listening to those books on the 12-inch records. Then we had 7-inch tapes, then cassette tapes," she said. "I've lived through all those wonderful ways of getting library books." 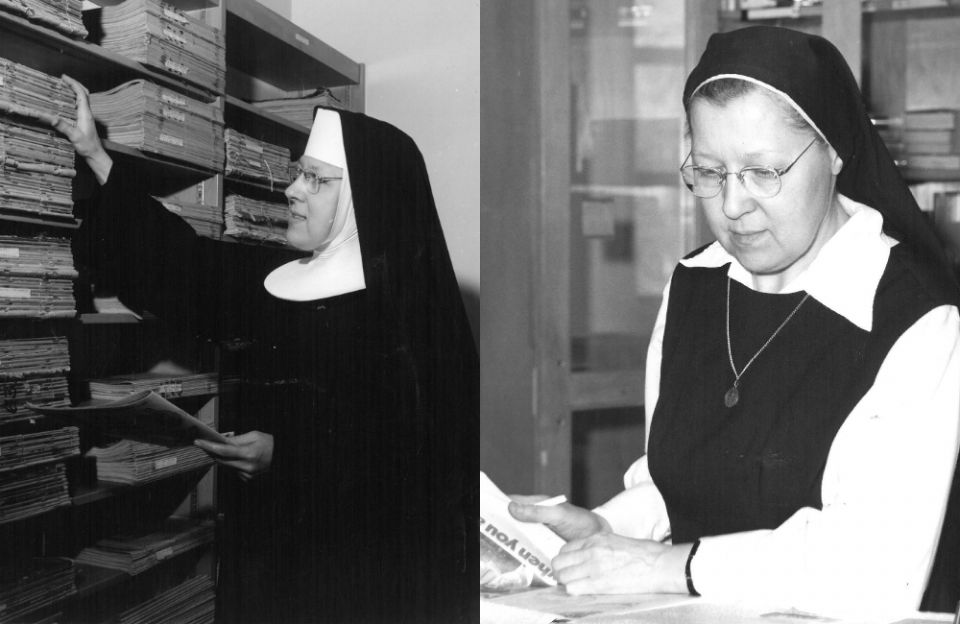 Chicago Benedictine Sr. Vivian Ivantic works as a librarian in undated photos. (Courtesy of the Benedictine Sisters of Chicago)

Looking back, she said her favorite part of life was teaching.

"It was wonderful to be able to open the eyes and ears and the souls of the little ones you taught," Ivantic said, "not just about God, but about history and geography. ... It was always a wonderful place to be."

Because of COVID-19 restrictions, her 107th birthday celebration has been spread over the week, with a few relatives visiting each day. Her niece Carol Finnegan will bring cake or cupcakes for the entire community for its Aug. 28 celebration.

"I've worked hard, I've had good health," Ivantic said. "It's been a good life for me."

Related: Q & A with Sr. Vivian Ivantic, witness to changes in the church in her 83 years as a sister

Coronavirus | In second pandemic, Benedictine turns 107, 'too old to be set back very much'

A modest but bold proposal: American missionaries to Ireland

Synodality is not new, but a tradition the church has drifted from, professor says

Millions of renters owe billions of dollars. Sisters are doing what they can to help