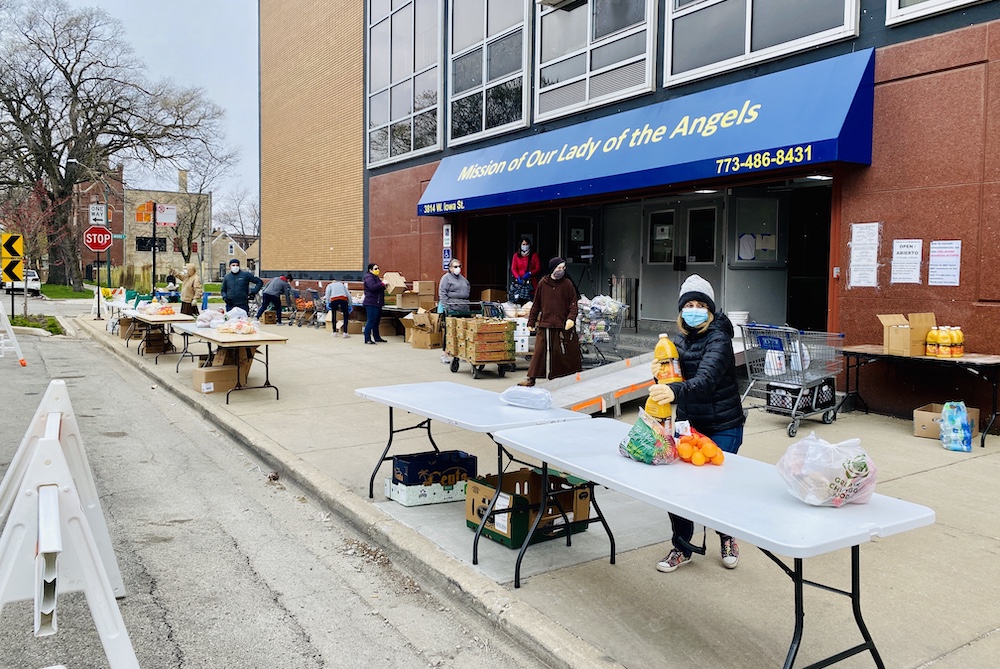 Sr. Stephanie Baliga had a problem: The Franciscans of the Eucharist of Chicago's food pantry was shut down by restrictions to stop the spread of the coronavirus, but the need for food in the neighborhood was greater than ever.

So she found a way. And as sisters are doing across the country under challenges imposed by COVID-19, when she ran into still more challenges, she got creative.

Nationwide, millions of people have lost jobs as employers closed or cut back, making the need for food and other support greater than ever, and Catholic women religious have answered the call in myriad ways.

The weekly food pantry at the Mission of Our Lady of Angels in Chicago's Humboldt Park neighborhood normally serves about 225 people, Sister Stephanie said, but the need for food had doubled. So the sisters moved the pantry outside.

Because social distancing requirements meant patrons would not be able to pick and choose their own food, it all had to be prepackaged. At the same time, the sisters couldn't allow most of their volunteers to help.

So all nine sisters in the small community, founded in 2010, pitched in to help. 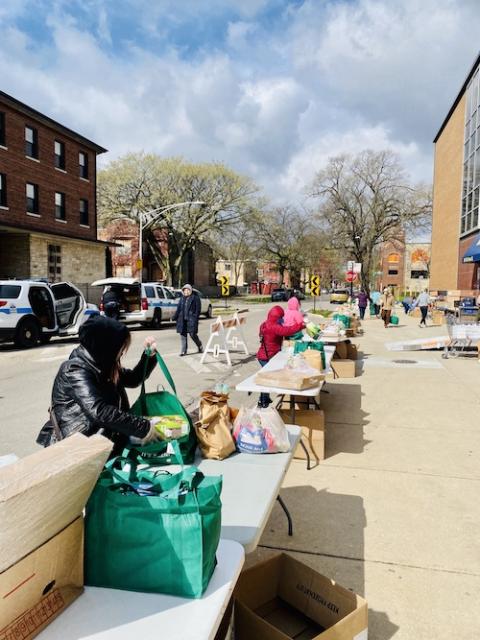 They did get some unexpected volunteers: the Chicago Police Department.

Even with moving the pantry outside and keeping everyone 6 feet apart, many senior citizens and those with compromised immune systems could not risk exposure. Likewise, those who are homebound discovered many of the services they rely on had been shut down. So the police loaded up a vehicle with more than 100 bags of food and delivered them to those in need.

"The city and the [police] department as a whole is going through a difficult period and this neighborhood, which is one of the more challenged communities within the city as we see it, needs all the help they can get," Lt. Jason Brown told the Chicago Tribune in late March. "We're kind of in uncharted waters. I think given that, we have to take a different approach to how we police and what policing really means."

Sister Stephanie said working with the police is not unusual at the mission, and that has not changed even after a weekend of destruction in Chicago that left 20 dead, sparked by protests over the death of George Floyd.

"They're absolute heroes," she said of the police in the neighborhood.

Sister Stephanie said the Mission's buildings were the only ones not damaged over the weekend, and that the neighborhood was largely destroyed.

"This is one of the most economically disadvantaged neighborhoods in the United States of America, so we were not in a good place before this [pandemic] started." 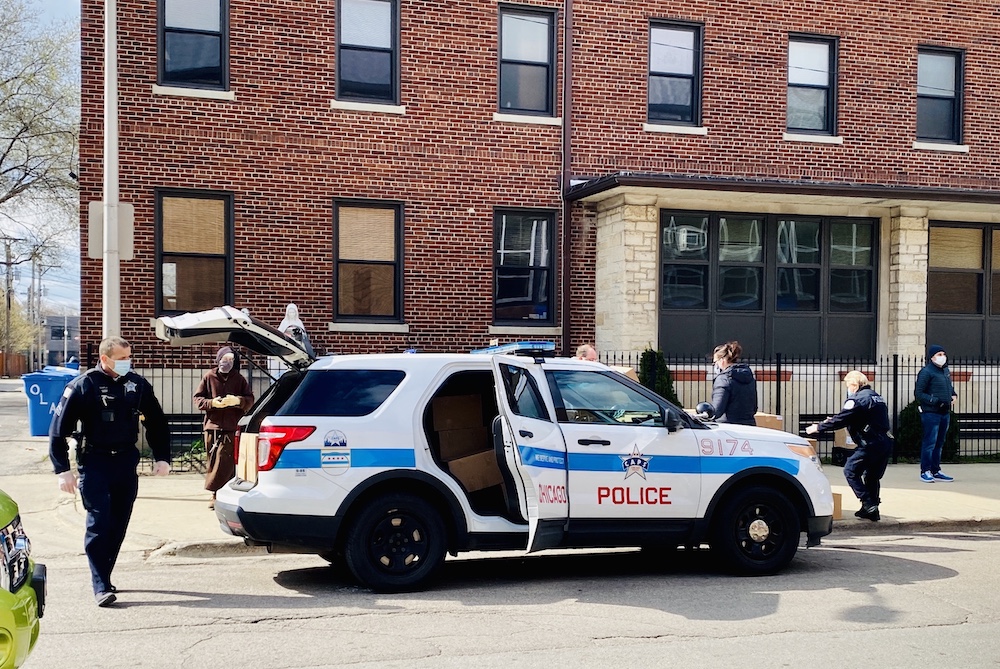 City of Chicago statistics show 34% of households in Humboldt Park are below the federal poverty level of $26,200 for a family of four. Per capita income there is about half that figure, and 35% of those 25 years or older do not have a high school diploma.

The pantry work has become all-consuming, Sister Stephanie said, but it hasn't been a problem because almost all of the community's other ministries have been shut down.

In Detroit, two Sisters of St. Felix of Cantalice, known as the Felician Sisters, also found themselves running a food pantry.

Previously, the ministry of Sr. Felicity Marie Madigan and Sr. Shelley Marie Jeffrey focused on hospitality: They opened the Deo Gratias Café in late January in the parish center at St. Jude Catholic Church, a place where they could build relationships with the community.

"We were just getting to really know some people when the pandemic put a kibosh on those kinds of activities," Jeffrey said. 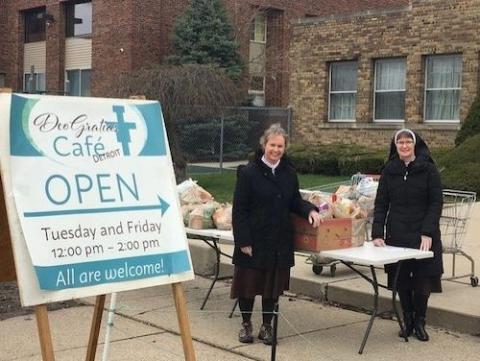 Felician Srs. Shelley Marie Jeffrey, left, and Felicity Marie Madigan at the food pantry they took over in Detroit. The parish-run pantry had to close to prevent the spread of COVID-19, so the sisters took it over and made it a drive-up system. (Courtesy of the Sisters of St. Felix of Cantalice)

At the same time, the food pantry in the parish center, where both Jeffrey and Madigan helped out, had to close under the state lockdown to prevent the spread of COVID-19.

"We felt we needed to do something," Jeffrey said.

So they took over the food pantry, making it a drive-by service where the sisters bring out bags of food and put them in patrons' cars.

Soon, they were handing out 60 bags of food a day twice a week. They also handed out masks to those who needed them.

"The masks go quickly, but sisters in different communities are helping make them," Madigan said. "Friends are helping replenish our stock."

Jeffrey said Madigan is especially good at matching masks to the recipients' personalities. Madigan said it's easy: Just give men anything superhero-related.

"It's amazing, the number of people who don't have masks," Madigan said. "They're so grateful to receive them."

Jeffrey said the neighborhood is one of the poorer areas in northeast Detroit, where there are a lot of single-parent families with multiple children. Many are either unemployed or underemployed.

"There was a woman, a working mother with six children who had just been laid off," she said. "Because she was working, she wasn't qualified for food stamps, but now she had no job, six children and no government assistance. She was almost in tears, she was so grateful for the food."

On May 18, everything changed again when the food pantry was able to reopen under its normal configuration. The sisters' café, however, could not, so they turned it into an outdoor café where they hand out boxes of food from the café curbside.

"We decided to think outside the box until we can do it indoors," Madigan said. "It's about conversation and developing relationships."

A food pantry in the New York City borough of Queens used to allow clients to come into the pantry and receive items "supermarket style," food pantry coordinator Nina Strazzulla said. But now, clients, lined up 6 feet apart for social distancing, come to a table where they receive prepackaged 12-pound bags of food. 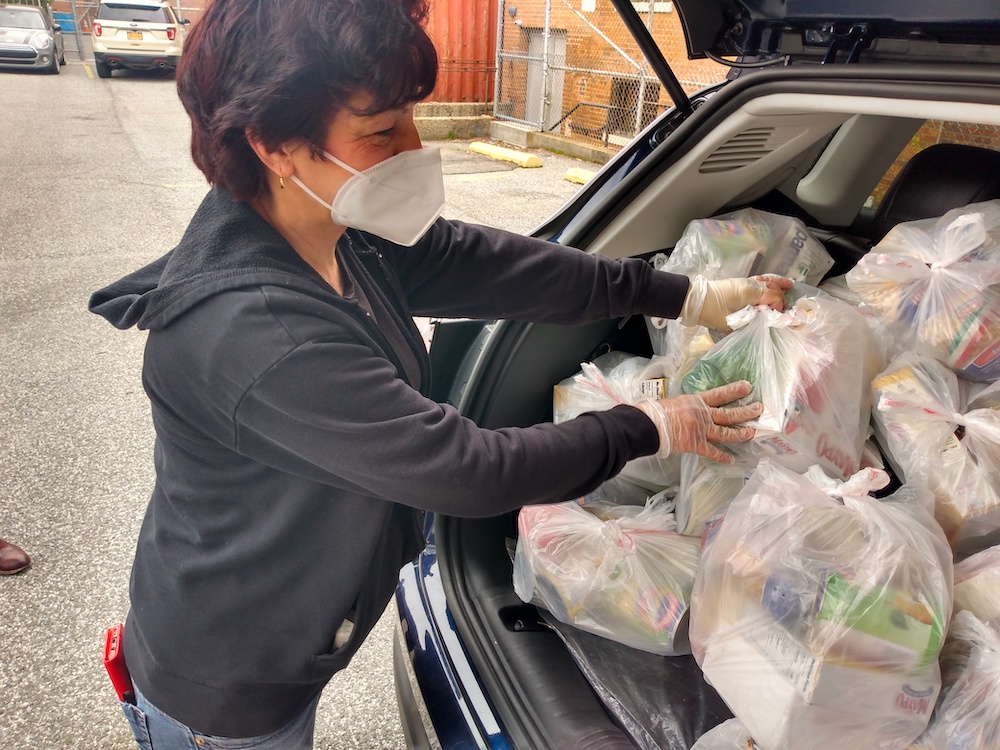 The food pantry is an initiative of Hour Children, a ministry headed by St. Joseph Sr. Tesa Fitzgerald. The bags include cereal, juice, protein, produce and frozen vegetables.

Strazzulla said demand for food at the food pantry has doubled since the pandemic began, and the new system of organizing and distribution has meant more work for the pantry's staff. Before, the pantry was serving an average of 135 families, she said, but that number has since doubled.

"It's just unbelievable," Strazzulla said. "It's sad. People need food. And they're predominantly new faces," with people from other New York City boroughs showing up. Before, most clients were Queens residents living in the immediate neighborhoods of Long Island City and Astoria.

The Sisters of Life, who run a pregnancy mission at St. Andrew's Church in Manhattan, have also had to adapt to new realities.

The sisters wear masks and only do curbside delivery, Sister Magdalene Teresa said.

"The [pregnant] women we serve have other children, and in certain areas we are getting reports that there is not much food on the grocery store shelves," she said. "Others say that the prices have been raised, making it hard for them to feed their families." 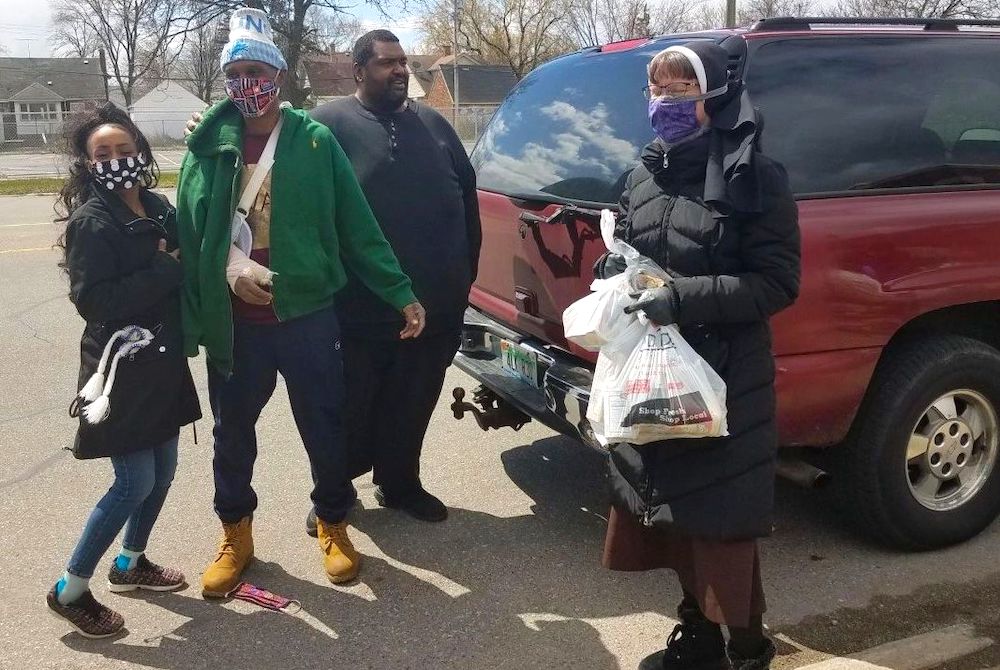 Felician Sr. Felicity Marie Madigan distributes food at the food pantry she and Felician Sr. Shelley Marie Jeffrey turned into a drive-up pantry in Detroit. (Courtesy of the Sisters of St. Felix of Cantalice)

[Dan Stockman is national correspondent for Global Sisters Report. His email address is dstockman@ncronline.org. Follow him on Twitter or on Facebook. Chris Herlinger and Robert Alan Glover contributed to this story.]

Read this next: The 'happiest place on Earth' shut down, hunger didn't
This story appears in the Sustainable Development Goal 2: Zero Hunger feature series. View the full series.