by David Gibson, Religion News Service
Social Justice
This article appears in the Nuns on the Bus feature series. View the full series. 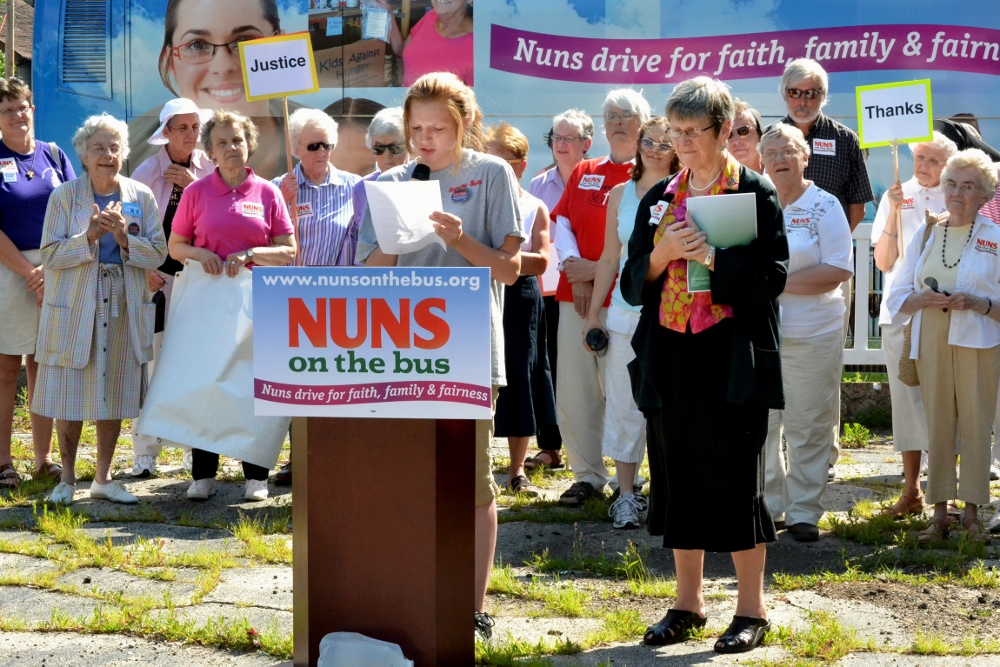 Sr. Simone Campbell, executive director of NETWORK, right, listens June 19, 2012, as Tia, a client of Maria House, which provides emergency transitional housing for women, explains how proposed federal budget cuts would affect her future during a stop in Dubuque, Iowa, by the first "Nuns on the Bus" tour. NETWORK has just announced it will make a third tour starting Sept. 17. (CNS photo/Sister Carol Hoverman, The Witness)

This time it’s the Catholic sisters versus the Koch brothers.

That’s one way to look at the upcoming Nuns on the Bus tour, which hits the road next week (Sept. 17) for the third time in three years, a month-long trip through 10 key U.S. Senate battleground states to campaign against the influence of outside money on politics.

The issue has come to be identified with the wealthy industrialist brothers Charles and David Koch, whose huge contributions to conservative political causes have raised concerns about the role of “dark money” on elections.

The spigot for such undisclosed donations, which can be made by unions as well as corporations, was opened by the controversial 2010 Citizens United Supreme Court decision. That was followed by another 5-4 ruling in April of this year, McCutcheon v. Federal Election Commission.

“It’s all about ‘we the people’ standing up against big money,” said Sr. Simone Campbell, who heads NETWORK, a Catholic social justice lobby on Capitol Hill that is organizing more than 75 events in 36 cities along the 5,252-mile route.

The Nuns on the Bus exploded onto the political scene during the summer of 2012 when Campbell first led a group of sisters on a motor trip through battleground states, mainly in the Midwest.

The focus of that campaign was income inequality and the working poor. The appeal of Catholic nuns taking to the road in the midst of the heated presidential campaign put Campbell on television and – thanks to her Democratic-leaning agenda – earned her a prime-time speaking spot at the September 2012 convention that re-nominated President Obama.

Last summer, Campbell and the nuns went on the road again on behalf of immigration reform.

“I wasn’t going to do another bus trip this year,” Campbell said. “I thought, twice in a row – do we do a third one?”

But she said the growing role of outside money in elections, with no requirements to disclose how much is donated and by whom, convinced her that another bus trip was necessary, though she will have to raise $400,000 to fund the trip. Campbell said she has collected about $300,000 so far, mainly from NETWORK members and from foundations that promote voter registration and health care reform.

Campbell said the tour isn’t aimed at advocating any particular policy or legislative fixes for unregulated campaign contributions. Instead it will focus on voter registration drives and canvassing low-income neighborhoods to rally voters to cast ballots in November.

“We want to say the 100 percent are welcome to the table of dialogue. But leave your money bags outside the door,” she said.

Campbell will be accompanied on the bus by different Catholic sisters from each state the bus visits and they will stay at convents where possible.

The tour starts in Des Moines, and at a subsequent stop in Davenport, Iowa, the local Catholic bishop, Martin Amos, will present an award to Campbell.

That’s significant because Campbell was one of the American nuns singled out for criticism in April 2012 by a Vatican investigation of a group representing most U.S. sisters, the Leadership Conference of Women Religious.

The Vatican said that the LCWR and nuns like Campbell did not spend enough time defending church doctrine on abortion and sexual ethics, and focused too much on social justice work. That work reportedly included advocating for Obama’s health care reform law, which the U.S. hierarchy strongly opposed at the time.

The Vatican’s doctrinal chief this month renewed his “blunt” criticism of the LCWR and its members, and after the LCWR’s annual meeting in August some critics on the right said Pope Francis should revoke the LCWR’s Catholic bona fides.

Jeffrey Mirus, founder of the Catholic Culture website, wrote that such a step was necessary because the spirituality of the LCWR “is rooted in paganism, its cherished causes read like a secular wish list, and its whole attitude is profoundly anti-Catholic.”

After stops in Iowa, the latest Nuns on the Bus tour will continue with multi-city stops in Minnesota, Michigan, Kentucky, North Carolina, and Louisiana and make one-off stops in Chicago, Atlanta and Charleston in West Virginia.The trip concludes in Denver on Oct. 20, two weeks before the mid-term elections that may well give Republicans control of the Senate in addition to the House.

[RNS editor’s note: David Gibson assisted Sister Simone Campbell in writing her memoir, A Nun on the Bus: How All of Us Can Create Hope, Change, and Community, which was published earlier this year.]

Related: Nuns on the Bus: GSR will be there by Dawn Cherie Araujo.