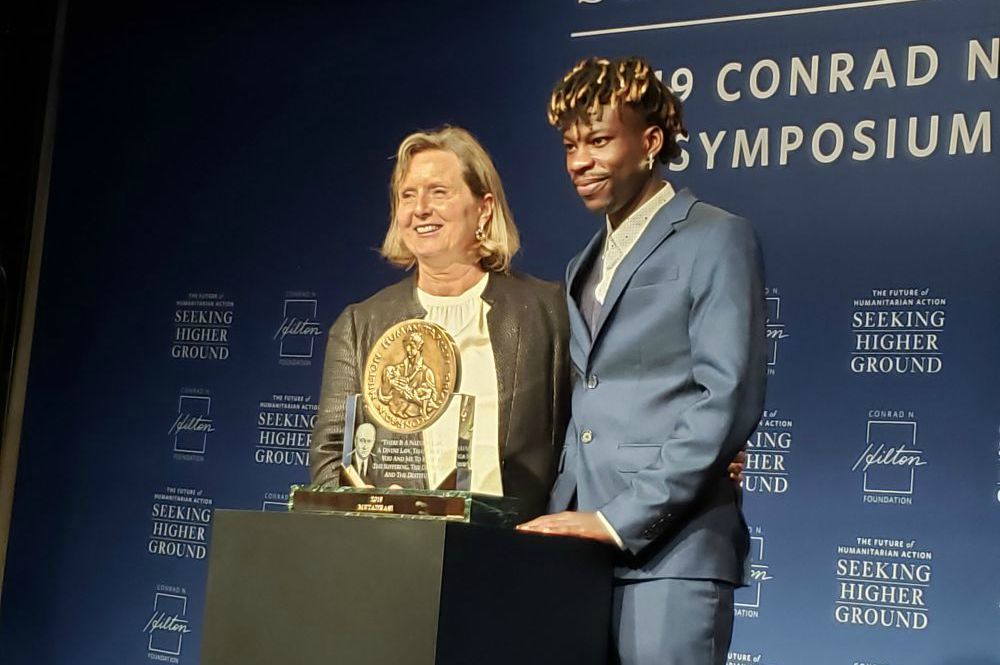 Lora Pappa, left, president and CEO of METAdrasi shares the podium with 19-year-old Carl Axel Prince Soami Mbadinga, currently a student at the Institute of Technology in France. He came to Greece from Gabon in 2017 as a refugee, without family, and became the first unaccompanied minor placed in a METAdrasi independent living program. They appeared together at the awarding of the Hilton Humanitarian Prize to METAdrasi Oct. 18. (GSR photo/Chris Herlinger)

In my travels for GSR, I see Catholic sisters constantly and consistently affirm the dignity of those who most need it — but are often denied it.

I've seen such examples by sisters working with refugees in Rome and Athens; by sisters accompanying youths in urban areas of El Salvador where gangs control the streets; by congregations doing exemplary work with migrants in Haiti, South Sudan and Jordan; and in Los Angeles, where sisters are working in a city facing serious challenges posed by homelessness and the lack of affordable housing.

Last week, I was fortunate to attend an all-day event that affirmed the sense of dignity for those on the margins, affirmation that comes easily to sisters — and, were it more common, would make the world a much better place.

This year's winner of what is the largest humanitarian award in the world is the Greek non-governmental organization METAdrasi – Action for Migration and Development.

In announcing the $2 million award, Hilton Foundation President and CEO Peter Laugharn said that awarding the prize to METAdrasi "speaks to both a global humanitarian crisis and the power of local organizations to use their personal experiences and knowledge to develop innovative solutions to complex problems."

METAdrasi, Laugharn added, "is a remarkable example of a nimble organization that leads the charge in areas where essential services are lacking. Their belief that migrants and refugees are a valuable part of our shared future and our shared humanity embodies the spirit of the prize and the work of the Conrad N. Hilton Foundation."

At the event at the Beverly Hilton, Laugharn reiterated that phrase but also took note of the importance of "Seeking Higher Ground," the theme of the day's symposium.

Laugharn said he meant "seeking higher ground" both in a literal sense, given concerns about climate change, but also in the moral sense — "meaning a spirit of compassion" and oriented toward solutions grounded in "humility and hope," he said. Those who care about the world, Laugharn said, should "honor the outrage" of injustices in the world. But, he added, it is important "not to fall into despair."

Sisters know this — a fact amply displayed when Sr. Joan Chittister of the Benedictine Sisters of Erie, Pennsylvania spoke on another theme for the day, the future of humanitarianism.

In a dialogue with Natasha Wang Mwansa, a Zambian social activist, Chittister, an NCR columnist and prolific author, most recently of the book The Time is Now, noted that there are a number of definitions of humanitarianism. But nearly all of them, she said, circle around the idea of improving life for fellow human beings. "Humanitarianism is maybe the best proof we have of our humanity … the essence of God's will for us."

Humanitarian institutions play a number of vital roles today in part because, Chittister said, they affirm the public space in which people can "stand up and refuse the negative."

While living in the Kara Tepe refugee camp on Lesvos Island, Greece, the children in this family are learning Greek, English and mathematics at METAdrasi's non-formal education center. (Courtesy of the Conrad N. Hilton Foundation)

Addressing Mwansa's belief that young people are impatient for change in the world on issues such as climate change, Chittister acknowledged the power of such impatience. She said she believes that one-third of every board of directors, be it a corporation or a non-profit, should be made up of those under the age of 40.

At the same time, as a Benedictine sister who follows a spiritual tradition with roots in the sixth century, Chittister argued that it is important to "move vision and memory together."

"Revolution should be evolution," she said, mixing dynamism with wisdom, adding that there are lessons religious traditions can impart to the wider world, including a commitment to "community, equality and peace."

Chittister's optimism set the tone for subsequent events of the day, including panel discussions on climate change and American race relations.

In the climate change session, Christiana Figueres, the former executive secretary of the United Nations' U.N. Climate Convention and a founding partner of the social change organization Global Optimism, warned that "there is no such thing as 'the Marshall Islands [in the Pacific] may disappear but that the rest of us are OK,' " she said. "Everyone is on the same boat." Marshall Islands climate activist Selina Neirok Leem agreed. "We're facing this right now," she said of the experience of her country.

Another panel member, Los Angeles Mayor Eric Garcetti, said while urgency on the issue is paramount — "the 2020s have to be the climate decade," he said — he is also optimistic about the possibilities of tackling the climate challenge because so many municipalities are addressing the problem at the local level. Last year, for example, 30 "megacities" announced that because of local efforts, their gas-house emissions were being lowered.

Figueres said the world is having to choose "between two futures" — continue as-is with dire results or embrace a recreated world with cleaner energy that, due to better technology, can be had for cheaper costs. "We can still do it," she said. "We can build a better world."

How easy is building a better world in the context of race relations? E. Tendayi Achiume, an assistant professor of law at University of California Los Angeles Law School, and Patrisse Cullors, the co-founder of the Black Lives Matter Global Network, said that the current dialogue on race is more sophisticated and nuanced in the United States than it is in Western Europe. But, they said, the U.S. would do well to embrace the language of international human rights law rather the language of incarceration in the face of what the two panelists called an unjust, racist and dysfunctional American criminal justice system.

The U.S. prison system "is about punishment," Achisume said, while systems in Europe are more focused on "rehabilitation and healing."

In her address, the Nigerian writer Chimamanda  non-governmental organizationzi Adichie, author of the novels Americanah, Half of a Yellow Sun and Purple Hibiscus, also championed the theme of dignity. 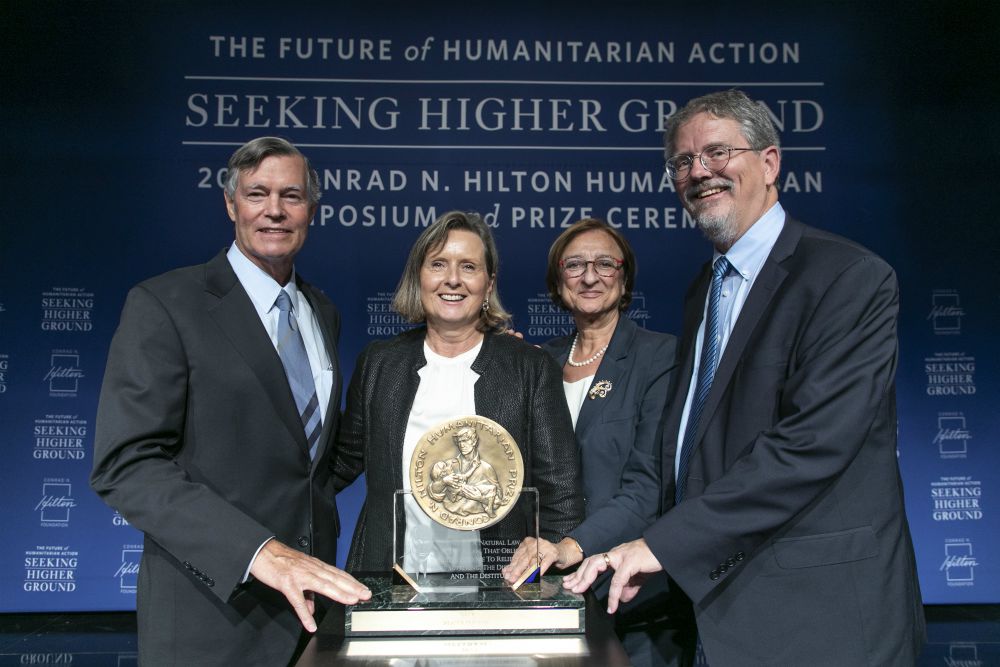 "Dignity and pride," she said, "matter as much as bread and water."

Recognition of the importance of assisting refugees was underscored with the awarding of the Hilton Humanitarian Prize to METAdrasi, which was founded in 2009 by Greek humanitarian Lora Pappa. Hilton said in its announcement of the prize that the Greek non-governmental organization fills "crucial gaps in the delivery of basic humanitarian services to refugees, migrants and unaccompanied children."

Among METAdrasi's programs are those focused on translation, protection and education — "to support the needs of unaccompanied minors and other vulnerable groups entering Greece," the foundation said. It noted that the United Nations estimates that more than 80,000 refugees are now in Greece, with 4,100 being unaccompanied children.

In accepting the award, Pappa, president and CEO of METAdrasi, praised the foundation for "acknowledging the gravity of the refugee problem [internationally].

She said the prize is affirms a global "spirit of solidarity" and noted that in awarding the prize to METAdrasi, the Hilton Foundation affirmed that "migration is not just a Greek or European issue. It's a global issue," and one that "is not going away."

Joining Pappa at the award ceremony was 19-year-old Carl Axel Prince Soami Mbadinga, currently a student at the Institute of Technology in France. He came to Greece from Gabon in 2017 as a refugee, without family, and became the first unaccompanied minor in Greece placed in a METAdrasi independent living program. After completing his baccalaureate with honors in Athens in June of this year, he moved to France where is studying transport logistics.

He thanked METAdrasi for what the organization had done for him and affirmed the possibilities of new life in France. "I know I belong to the future," he said but also added a call for countries to respect the worth and dignity of refugees. "Every refugee can be part of your country's future."