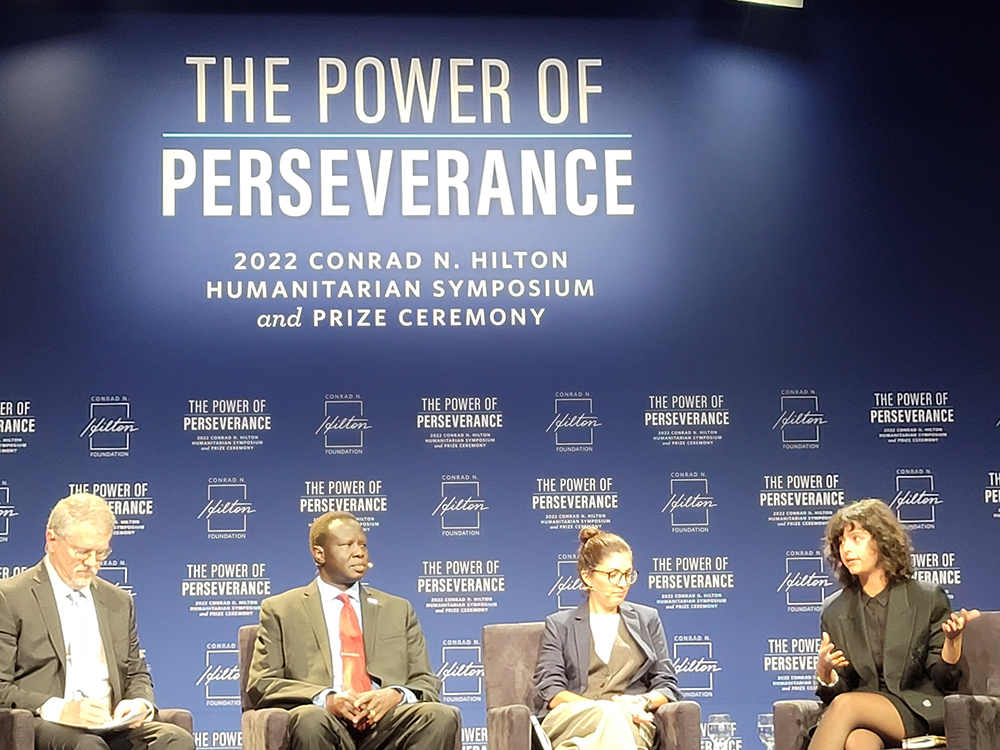 Stories of tragedy, triumph and the resilience of humankind were woven throughout the program of this year's Hilton Humanitarian Symposium and Prize Ceremony, held Oct. 21 in Los Angeles.

The 250 or so ceremony attendees heard presentations on the theme, "The Power of Perseverance," which included stories about the refugee crisis that has seen more than 100 million people across the globe leave their homes because of war, natural disasters and climate change.

The focus on refugees was particularly appropriate given this year's recipient of the 2022 Hilton Humanitarian Prize: the Norwegian Refugee Council, which last year assisted almost 10 million displaced people in 35 countries.

Shameran Abed spoke of the work of his late father, Fazle Hasan Abed, in founding BRAC International, which addresses poverty through education, health care, microfinance and other programs in 10 countries in Asia and Africa, drawing on a model originally established in Bangladesh. Shameran Abed, BRAC International's executive director, noted that BRAC is one of the few development organizations from the Global South, and it wants to retain that identity and approach. (BRAC received the Hilton Humanitarian Prize in 2008.)

The Campaign for Female Education, or CAMFED, which educates girls in rural sub-Saharan Africa, received the prize last year, but because of the pandemic, Angeline Murimirwa, executive director in Africa, could not attend the presentation. At this year's symposium, journalist Soledad O'Brien, the event's master of ceremonies, interviewed her.

Murimirwa was one of the first girls that CAMFED sponsored in Zimbabwe, which allowed her to continue school when her parents couldn't afford the fees. She continues to work for the organization and said she believes in its transformative power of educating young women. 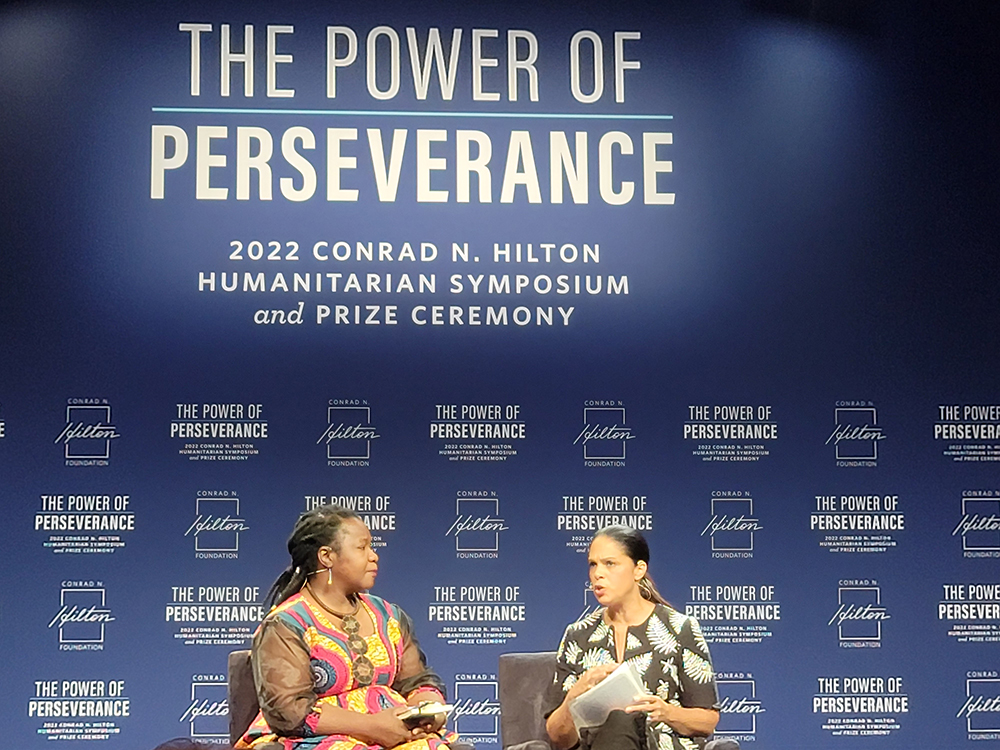 She and other recipients of CAMFED assistance formed their own support group, CAMFED Association, to "support each other to navigate the world and help the next generation." The association currently has almost 210,000 members.

Receiving the Hilton Prize last year was particularly meaningful, she said, because CAMFED staffers worked hard during the pandemic, when education was under threat because of school lockdowns.

"Going village to village, telling them they needed to keep education going, that is perseverance," she said.

During a session called "Refugee Resilience: Guiding the Way Forward," three panelists — all former refugees who now work to address the needs of people who have been displaced — spoke of the need for more resources to be directed toward local organizations.

"There is a need to rebuild the structure and have people who have experienced forced displacement be part of the heart of the solution, not consulted occasionally," said Sana Ali Mustafa, CEO of Asylum Access and a Syrian refugee.

Jan Egeland, secretary general of the Norwegian Refugee Council, acknowledged that need as part of his remarks in accepting the Hilton Humanitarian Prize.

"We are far behind where we should be," he said; however, international organizations and donors "realize that there has to be much more of an equal partnership. Local organizations were there before we came and will be there when one day, we leave."

He listed a litany of needs around the world, including: the war in Ukraine, which has displaced about 8 million people; "neglected" crises in Congo, Somalia and other areas of Africa, where he warned that "horrific famine" is possible; and displacement because of climate change, including drought in Somalia, floods in Pakistan and fires in California.

The 100 million displaced will soon be 110 million, he said.

"Never have we seen so many in such great need and such a gap between needs and resources," he said, citing rising costs that create "impossible choices of who to help and who not." 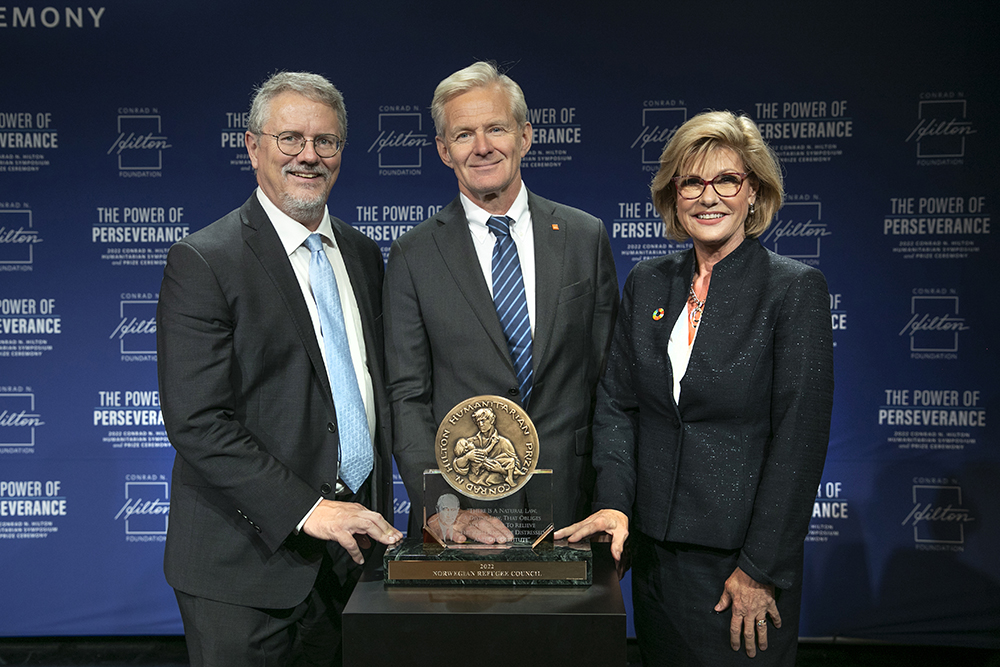 Still, Egeland said, there are signs of hope. The world has "unequaled opportunities" thanks to more resources and advanced technology to help those that they serve. The younger generation entering local and international aid work are better educated, he said.

In areas where local and international organizations work, he said, mortality and morbidity are down; more people are displaced and in need, but more lives are being saved; education and communication are better, even in emergency situations; disease and sanitation control has improved.

More assistance is being made in direct payments so recipients can decide how best to address their most important needs. Teachers are being trained to help children who have experienced trauma so they can get counseling while continuing their education.

Egeland talked about innovation by youth at a refugee camp in Jordan who devised a system to save electricity that made it possible for the camp to go from a few hours of electricity during the day to having electricity 24 hours a day, seven days a week.

"It is possible to change things for the better with the power of perseverance," he said.

In northern Cameroon, Egeland said, he visited a village that Boko Haram destroyed and asked the children what they wanted to be when they grew up. Instead of wanting revenge for the atrocities, he said, the children "wanted education to be engineers, teachers, farmers. 'We want to rebuild.' We can enable that, but we need to do more and better through the power of perseverance."

In his conclusion, Hilton Foundation president Peter Laugharn spoke of the "two truths" that day's presentations had left on his heart: "One is an awful truth: the misery, the challenges, the difficulties that 100 million people need to live every day. We've seen that in so much detail, in so many angles, in ways that pierce the heart." The second, he said, "is a beautiful truth: that there is power, there is capacity, there is love between these people at different levels, and that there is much to build on.