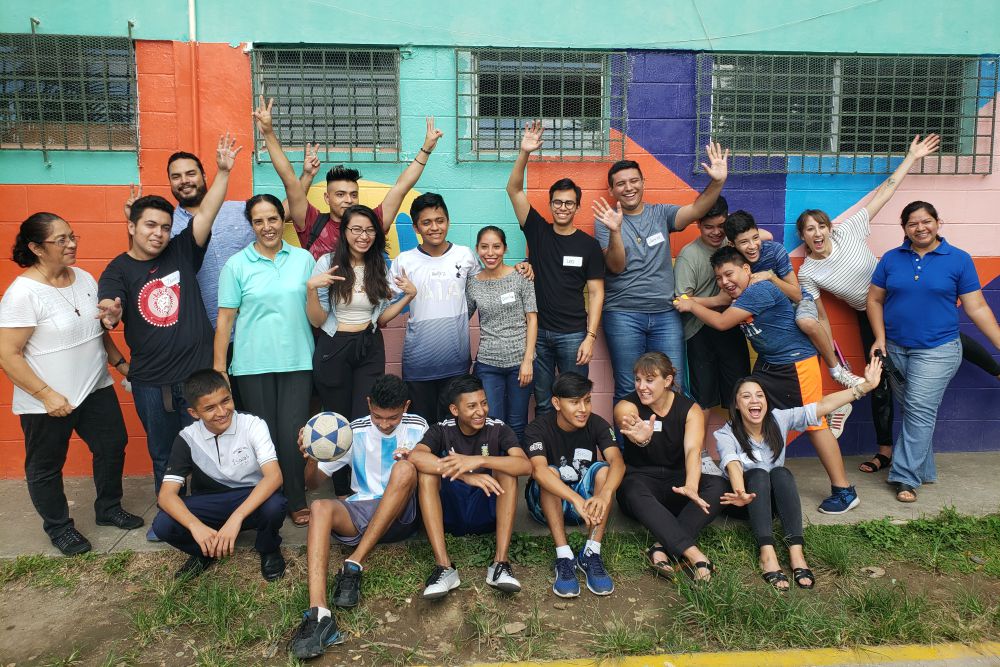 Young people, Alight staffers and sisters in Apopa pose for a group photo in front of murals that depict the joy of the Color Movement, an initiative of sisters in El Salvador, Alight and Sisters Rising Worldwide. (GSR photo/Chris Herlinger)

An eerie calm descends early in the day on the streets of Apopa — a calm rooted in fear and weariness.

In this colonia just outside the capital of San Salvador, gangs are powerful, and people of all ages are often reluctant to venture out.

Ecuadorian Guardian Angel Sr. Carmen Dávila Soria said the colonia's reputation is so potent that it is often hard for residents to get jobs elsewhere in El Salvador because of assumed associations with gangs.

"They will think you're a relative of a gang member, even when you're not," she said.

In such an environment, finding and affirming common humanity is not easy. Joy can seem rare, out of reach. But it is not impossible, thanks to a coalition of sisters and partners trying to bring hope through hard work, a stubborn belief in goodness, and a sense that El Salvador's future holds promise.

And it is all represented through the idea of color.

The Color Movement is a joint initiative of Alight, formerly the American Refugee Committee, and Sisters Rising Worldwide, both Minnesota-based organizations. In El Salvador, the initiative supports the work of 10 sisters from two congregations, the Sisters of the Guardian Angel and the Apostolic Sisters of the Heart of Jesus, in two different locations.

A cornerstone of the work is providing safe spaces for teenagers and young adults in challenging environments — in youth centers like the one in Apopa, for example, where dozens of young people find sanctuary and safety from the gang violence and tensions of the streets, taking classes and workshops and playing sports, among other activities. 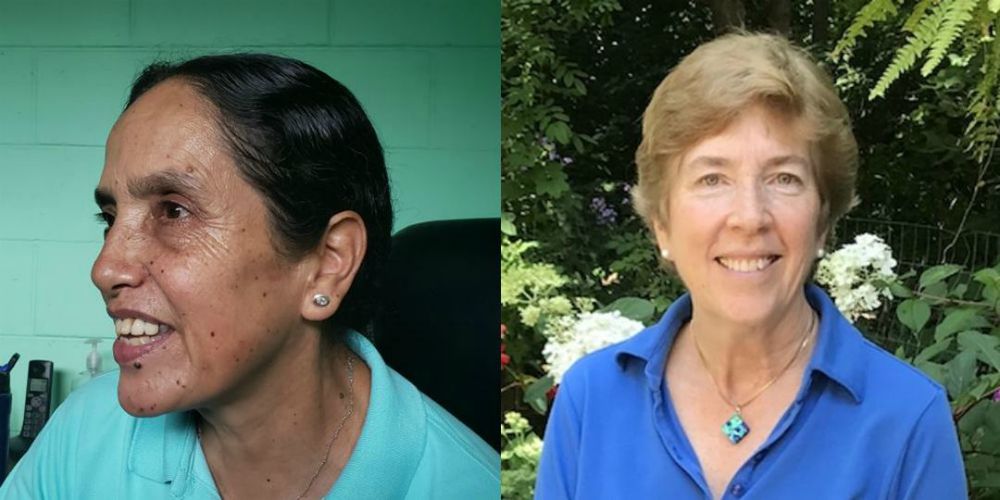 Alight describes the Color Movement as being "about joy," about "shining a light on abundance in El Salvador."

" 'Joy' is the key word," said Sr. Irene O'Neill, president of Sisters Rising Worldwide. Joy was translated into "color" as good way to express the idea of joy, and so a "color movement" was born.

In the initial work, Alight contracted with international design and consulting firm IDEO in 2018 to determine how the sisters' work in El Salvador could be enhanced and defined. What IDEO discovered in interviews in the communities where the sisters work is that residents "felt safe, hopeful, and they felt joy," O'Neill said.

It is the joy that sisters bring to communities that ultimately defines the movement, O'Neill said: "Sisters are trusted."

And not only that, said Annie Nolte-Henning, the Alight project manager for the work in El Salvador: "They are a 'force field' of safety."

With the representations of joyous color on the walls of community centers and even homes, a signal is sent: "Joy, spread through the sisters, exists in this household," O'Neill said.

What that means concretely in a place like Apopa is that a gang presence does not define a community.

Dávila's colleague, Salvadoran Guardian Angel Sr. Concepción Marroquín Nolasco*, known to all as "Sister Conchy," noted a key element of the sisters' work: "We take the time to ask, 'What do you need?' That closeness becomes a support in a safe space."

While Alight provides personnel and administrative work for the initiative, Sisters Rising Worldwide ensures that the grounding spirit of the Color Movement is the work of sisters, said O'Neill, a member of the Congregation of the Sisters of St. Joseph.

Formed in 2016, Sisters Rising Worldwide, a sister-run nonprofit, links congregations with available resources, including best practices, strategic relationships or finances, to promote sisters in their humanitarian work, she said. In early 2020, the work of Sisters Rising Worldwide will be amplified by the introduction of an online platform that will further expand the ability of congregations to connect to each other as well as access resources and promote best practices.

In its work to bring together sisters on issues of common concern and injustice and to fight the root causes of poverty and post-war violence in countries like El Salvador, Sisters Rising Worldwide works with partners like Alight to enhance the work of sisters "on the ground," said O'Neill. Sisters Rising Worldwide and Alight have worked together on the Salvadoran project for about two years.

In acting as a liaison between the sisters and donors in the United States, and with ties to partnering businesses in the United States and El Salvador, Alight has been able to raise about $500,000 in the last two years for the Salvador work, Nolte-Henning said. About 40% of the funds have been already used for building and remodeling projects, workshops, field trips for youths and, just recently, hiring local staff in El Salvador.

El Salvador is a "test case" for how Alight can work with Catholic sisters in the future in other countries, Nolte-Henning said. A parallel program at the U.S.-Mexico border is underway, "and we are continuing to talk about other areas," she said.

Drawn to sisters' deep roots in a society

With its ties to businesses and other large organizations, Alight links resources to the work of sisters: for example, bringing together industrial designers and Salvadoran businesspeople to expand a small café and develop a working and meeting space for young people on the grounds of a sister-run church school and youth center in La Chacra, another colonia facing economic and social challenges. Sherwin-Williams donated paint for the colorful murals and wall signage at the youth centers.

Roberto Juárez, 32, a Salvadoran industrial designer working with Alight and the sisters on the café and work space project, said the work he and other designers are performing is a way to help a country too often portrayed internationally as mired in problems.

"I feel privileged that I can use my skills for an impactful project," he said. "It's a huge opportunity. There are many problems here, but there are also many opportunities. In fact, I'd say this is the best place for opportunities."

El Salvador is the first country in the Western Hemisphere where Alight is working because of the strong presence of sisters. 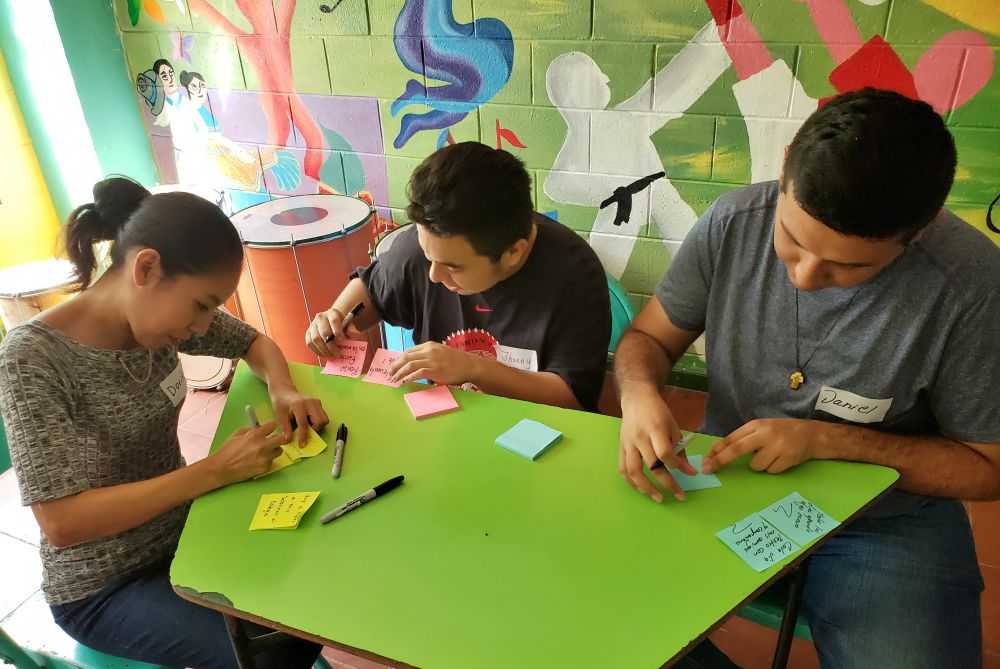 Nolte-Henning said Alight was also drawn to sisters' work because of the deep roots sisters have in a society.

"What we have seen with the sisters is social credibility that is unmatched anywhere," she said. "They take a holistic approach in working toward healing violent communities."

At the same time, Nolte-Henning said, sisters working in small groups can often "feel quite lonely when they don't have a parish behind them or a larger community of sisters [where they are working]."

"They are so busy with head-down work, they don't have time to stop and tell others about the impact they're having," Nolte-Henning said. "They're humble to a fault."

The work Alight and Sisters Rising Worldwide are doing is meant to empower the sisters and amplify that impact, she said.

"What I love about the sisters is that they cannot be co-opted," she said. "For this reason, they often miss out on funding opportunities. Alight honors this and works to help provide resources so they can continue flying under the radar and do their work in the way they know is best for their communities."

Even gang members respect the sisters

Do the sisters believe working under an umbrella somehow dilutes their congregational identity?

Not at all, Dávila said.

"I believe the Color Movement will be a big help. All types of support are welcome in this place," she said, adding that the sisters feel empowered with more support by Alight and businesses, whether that means money to help buy soccer and other sports equipment or the financial resources to expand work, like the café.

The key, Dávila said, is "building up" young people so they are recognized and affirmed.

"When gang members ask the kids where they are going, and the kids say, 'I'm going to the youth center,' that means a lot. The gang members respect the center," she said. "It's like a temple."

"Many of the gang members had positive interactions and experiences [with sisters] growing up," Nolte-Henning said. "They remember this. And while they chose a criminal and violent route, they respect the sisters for what they do in the community."

Raquel Orellana, the Color Movement's lead program representative in El Salvador, notes there is also a practical aspect involved: "A lot of the gang members' children are themselves beneficiaries of the sisters' projects," she said.

Dávila said work at the center empowers young people, which in turn empowers families to feel better about their community. But the young people's enthusiasm also empowers and encourages the sisters to continue their work.

"It's like a seed you plant, and it becomes a beautiful plant with more color," she said. 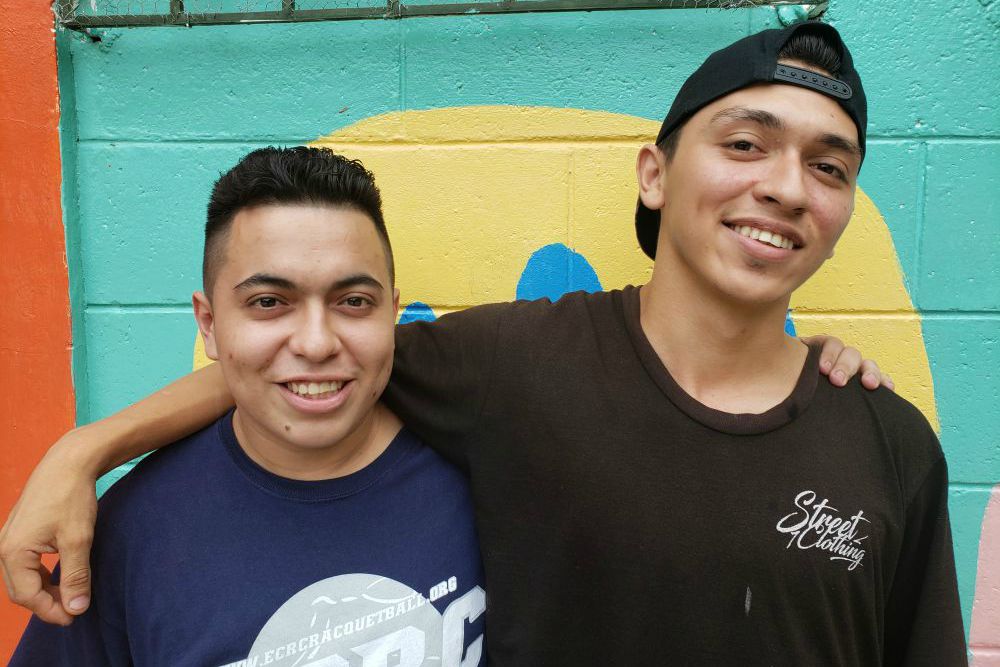 Rafael Antonio Orellana Sanchez, 22, right, aspires to be an artist or entrepreneur, and his friend Jhonny Alexander Barrera Miranda, 21, wants to a photographer. The two participate in Color Movement activities at a sisters-run youth center in Apopa, El Salvador. (GSR photo/Chris Herlinger)

Rafael Antonio Orellana Sanchez, 22, aspires to be an artist or entrepreneur, and his friend Jhonny Alexander Barrera Miranda, 21, wants to a photographer. Both have created and painted murals for Color Movement spaces in Apopa, and both of their lives turn on the importance of the arts. Barrera wants to study literature or philosophy, and Orellana is a hip-hop artist whose dance skills are envied and emulated: He teaches hip-hop dance to teenagers at the Apopa youth center.

"Everyone has problems," he said. "But when you dance, you leave your problems behind. It's cathartic."

In their world, the center and the sisters are lodestars.

"For us, this is a wonderful space. We give of ourselves," Orellana said.

Barrera interjected: "It's a space where everyone respects one another and where we are respected."

Orellana said the gang members he knows respect his decision to focus on hip-hop and to continue working and collaborating with the sisters, whom he describes as mother figures.

"If this place didn't exist and we didn't have the sisters," he said, "we'd be dead, or not going out, or doing bad things."

Dávila stressed the need for everyone involved to collaborate and said she finds symbolism about that in the idea of color.

"Each color has a value," she said. "With the youth, with the sisters, with Alight, we all work together."

"The sisters are one color, the youth another color, Alight another," she said. "The combination will bring out a new color, and that's the color of hope." 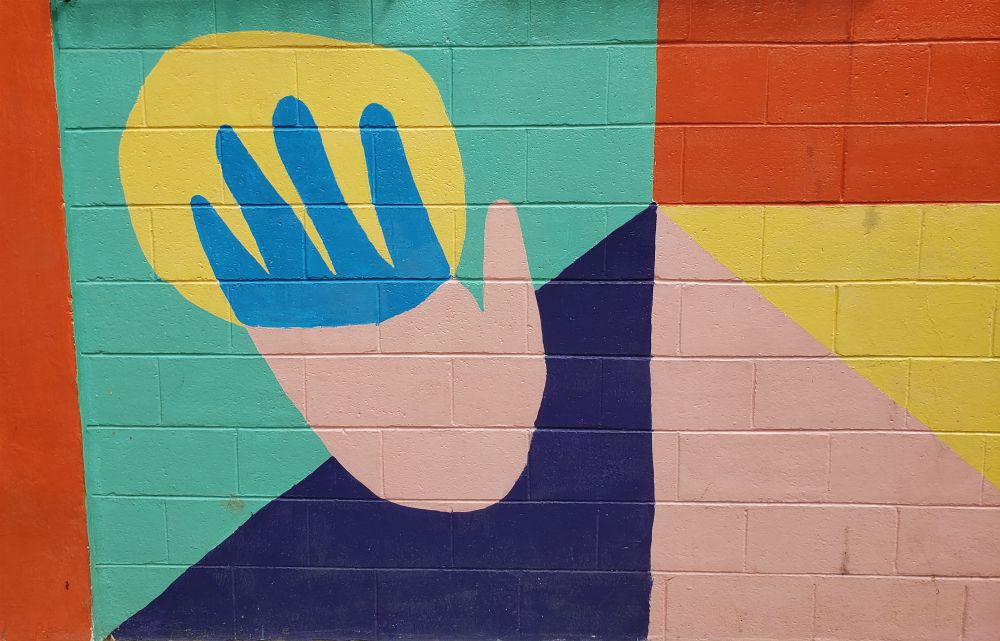 Detail of a mural on an exterior wall of a youth center in Apopa, El Salvador, painted by young people that depicts the joy of the Color Movement (GSR photo/Chris Herlinger)

*An earlier version of this story misspelled her name.