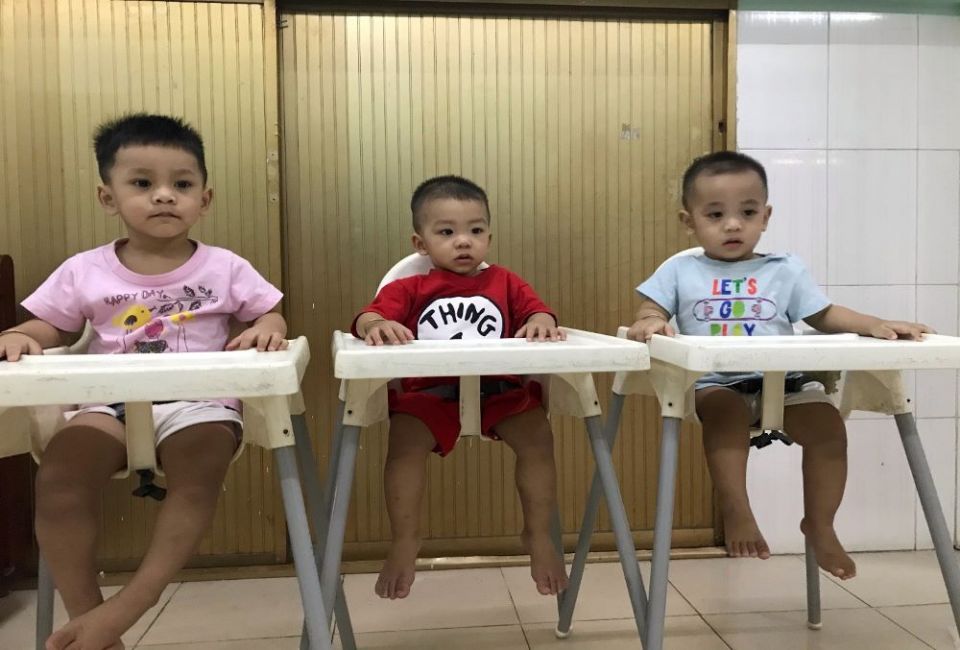 Sisters minister to children who are abandoned at the hospital, in rental houses and at the landfill. (Mary Nguyen Thi Phuong Lan (Nguyen))

In 1991, after finishing morning Mass, Dominic Tran Xuan Thao, priest of the Ha Noi parish of the Xuan Loc Diocese, received an abandoned infant at the church exit. He was touched by the plight of abandoned babies and aware that children have an important position in scripture — the Kingdom of God belongs to them.

So Fr. Dominic asked the local government for permission to establish an orphanage center, not only to care for the orphans, but to offer free classes for poor children. Officially the Orphanage Center Hanoi Parish, Xuan Loc Diocese, consists of two sections: the orphanage and the school. Fr. Dominic authorized two congregations in Vietnam to manage them.

Now retired for six years, Fr. Dominic is 81 years old. However, he continuously accompanies and supports the sisters in the spiritual and physical needs of the children. He offers Mass, provides the sacrament of reconciliation for the children every month, and finds benefactors so the sisters have the financial resources to nurture and educate the children.

Presently, the Sisters of the Assumption are in charge of the charitable classes, with 120 children from kindergarten to 5th grade. Most students are from poor families; parents cannot afford to pay school fees for their children. Others are from immigrant families from different areas in Vietnam. Children immigrate with their parents, who hope to earn a better living or have a better life in the Dong Nai province. Thus, the children do not have the documents they need to attend the public school. 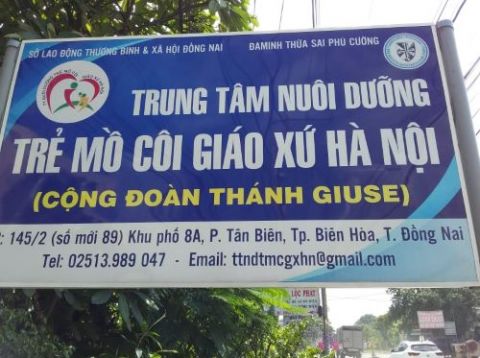 The children are not charged school fees, but receive free school uniforms, textbooks and supplies at the beginning of the year. They particularly enjoy a snack in the middle of the session. In addition to following the curriculum and policies of the public kindergartens and elementary schools, they are able to learn the catechism and recite daily prayers before starting class. It is the aim of the Assumption Sisters to educate them on the life of faith from an early age. Additionally, sisters are always willing to help children who are qualified and have the legal documents to enter the public secondary school — in the hopes that the children will have a good education in the future.

The orphans are cared by Dominican sisters of Xuan Loc diocese. In the past 30 years, the center has welcomed 56 children. About 24 have grown up and built lives in the local community. Some have found and returned to their parents and relatives.

Currently, the sisters minister to 32 orphans: five in the university, two in high school, nine in primary school, and 10 in kindergarten. There are five young children from birth to two years old. Most do not know who their parents are because they were abandoned at a hospital, a rented room or the landfill.

Sr. Rosa — who is in charge of the orphans — told a story about a morning in September 2016. About 6 a.m., an 11th-grade student on her way to school saw a naked newborn boy on the landfill. Immediately she took off her jacket to cover the baby, hurriedly bringing him to the center and handing him over to the Dominican sisters. Now he is very healthy and growing normally like the other babies in the center.

Another case of abandoned children involved newborn twin girls left at Children's Hospital, in Bien Hoa city, Dong Nai province. The doctors called Sr. Rosa to pick them up, but before bringing these kids to raise, Sr. Rosa had to pay the hospital fee, about 30 million Vietnamese dong (nearly $1,500 USD). 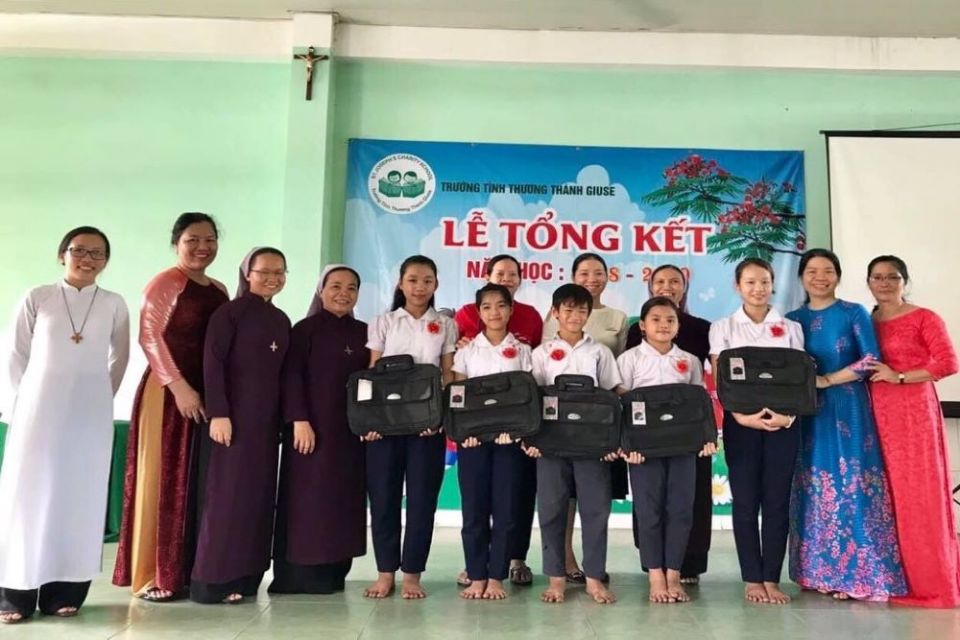 Sisters minister to children who are abandoned at the hospital, in rental houses and at the landfill. (Mary Nguyen Thi Phuong Lan (Nguyen))

When these children are growing up, they are baptized and attend catechism classes at the parish, and taught to embrace Catholicism. Staying with the sisters in the center, children say daily prayers, read the scripture, pray every evening about 15 minutes before going to sleep, and get up in the morning to attend daily Mass.

For the Mid-Autumn Festival, Christmas or International Children's Day, we invite volunteers to talk and play with the children through activities that bring childhood joy, confidence and happiness for the abandoned children — singing, dancing, telling humorous or educational stories — to help them forget the feelings of being abandoned and be good human beings in the future. And perhaps most important for the children, each child receives a gift on these occasions!

According to Sr. Cecilia, who works directly with the orphans, it is not easy to take care of these kids, who have not known parental love. Therefore, all the sisters here play both the roles of mother and father to compensate for that loss, so the children can confidently enter into society later. She said, "For the orphans, love is the most important thing that helps them to boldly integrate with the community, be more confident in life, ignore their inferiority complex to overcome the difficult situations."

I interviewed a 19-year-old orphan girl, a second-year accounting student at Dong Nai University in Bien Hoa City. She lived in this center from childhood to adulthood, taken care of by the sisters. She didn't know who her parents were, but received great affection from Fr. Dominic, the sisters and friends in the Center. Instead of staying at a rental house or dormitory to study at the university like other students in the Center do, she goes to school during the day and come back to the Center in the afternoon to help the sisters care for the little kids in the evenings and on weekends.

She said: "I am grateful to Fr. Dominic who established this Center to welcome the abandoned children like me. I especially express deep gratitude to all the Dominican sisters for hard working to nourish and educate me to be an adult. Thus, aside from going to class, I want to do something to aid sisters and little children in the center."

I feel a special closeness to this center and the children, since I used to work here before I took perpetual vows. I was both an English teacher and a staff member. Now I work elsewhere but return to help my sisters translate correspondence from foreign groups, and still teach the children English for one hour a week.

Now the sisters are working day and night to make summer plans for the kids, since the pandemic precludes summer vacation and summer classes, and volunteers can't help. They are studying catechism and English, reviewing old lessons and preparing for next year.

We are celebrating the 30th anniversary of the orphanage and we — Fr Dominic, the Assumption sisters, the Dominican sisters and all the children — constantly thank God for giving us his abundant grace and strength to carry out our mission: to bring God's love to the poor and the unfortunate by loving and caring for them. We especially thank God for sending benefactors, and charitable groups inside and outside Vietnam who have aided us in serving the poor and abandoned children. 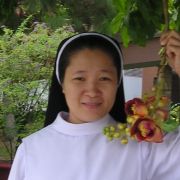 Mary Nguyen Thi Phuong Lan (Nguyen) is a Dominican Sister of the St. Rosa Lima congregation of the Sai Gon Archdiocese in Vietnam. After studying at universities in Vietnam and in Manila, Philippines, she worked in formation programs in Vietnam. Now, she is an English teacher for the Catholic college of the Xuan Loc Diocese in Vietnam, and a regular contributor to Global Sisters Report.