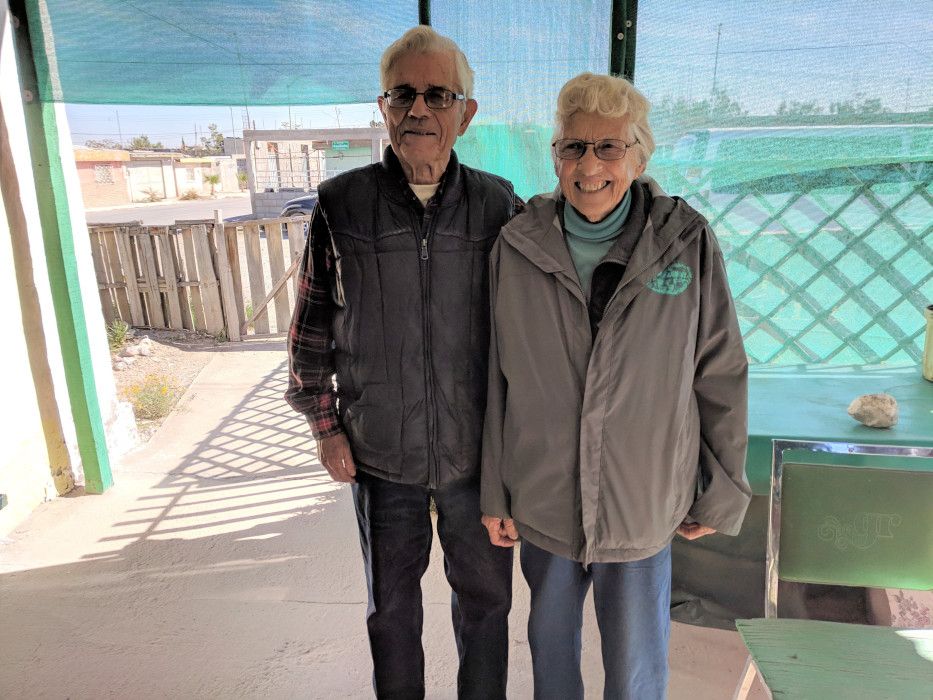 Mercy Sr. Betty Campbell and Carmelite Fr. Peter Hinde are pictured in a 2018 photo in Ciudad Juarez, Mexico. Hinde and Campbell will receive the CRISPAZ Peace Award Nov. 17 for their decades of ministry and social justice work in Latin America. (CNS/Courtesy Sisters of Mercy of the Americas)

In the anecdote, originating from the time when they began working together in Peru, a local man said good guests do not enter uninvited and don't rearrange things once inside.

"It's about how many times good-hearted Americans come to another country, thinking how they're going to help the people without asking the people what they want," said Mercy Sr. Kathleen Erickson, who knows the pair well.

Hinde and Campbell took it to heart. That wisdom has shaped their decades-long ministry, which has focused on being a witness, living in solidarity with the poor and raising awareness of what they consider the corrosive effects of U.S. policy toward Latin America.

"Tabor House did a lot of hospitality for the poor," said Erickson, "but it was also what they called 'contemplative political action.' They wanted to understand what was happening to people, forcing migration."

The pair worked quietly in Ciudad Juarez, not seeking the spotlight, but actively bearing witness to the difficulties of life in the borderlands: the murders of women, migrants perishing in attempts to reach the U.S., low wages and poor working conditions in the factory-for-export economy and drug cartel violence.

Hinde and Campbell will receive the CRISPAZ Peace Award Nov. 17 for their decades of ministry and social justice work in Latin America.

An ecumenical organization, CRISPAZ, or Christians for Peace in El Salvador, was co-founded by Hinde and two colleagues in 1985 during the Salvadoran civil war. Human rights abuses by the Salvadoran army were rife, and CRISPAZ volunteers provided a presence in the country in an effort to prevent atrocities from occurring.

Hinde and Campbell were unavailable for an interview. Hinde, 97, recently left the hospital after battling COVID-19 complications. Campbell, 86, a nurse by training, has taken care of him, but also contracted COVID-19 without showing symptoms.

Colleagues describe the pair as still active at Casa Tabor, where murals speak of social justice and the names of the missing and murdered are written on the walls.

They long have received groups of U.S. students and parishioners seeking to learn about the realities of the U.S-Mexico border region. They also have crossed the border into adjacent El Paso, Texas, to protest injustices in U.S. immigration policy, foreign policies and wars.

Both U.S. citizens, Hinde and Campbell met while serving in Peru and traveled frequently throughout Latin America, learning of local situations and advocating for changes in U.S. foreign policy. They established Casa Tabor in 1995 and "were very careful," Erickson said. "They didn't start anything up."

Neighborly love of the Franciscan Sisters of the Sacred Heart

Q & A with Sr. Pierina Cecilia Das on being a Catholic teacher in a Muslim country

Do we have the freedoms we claim?