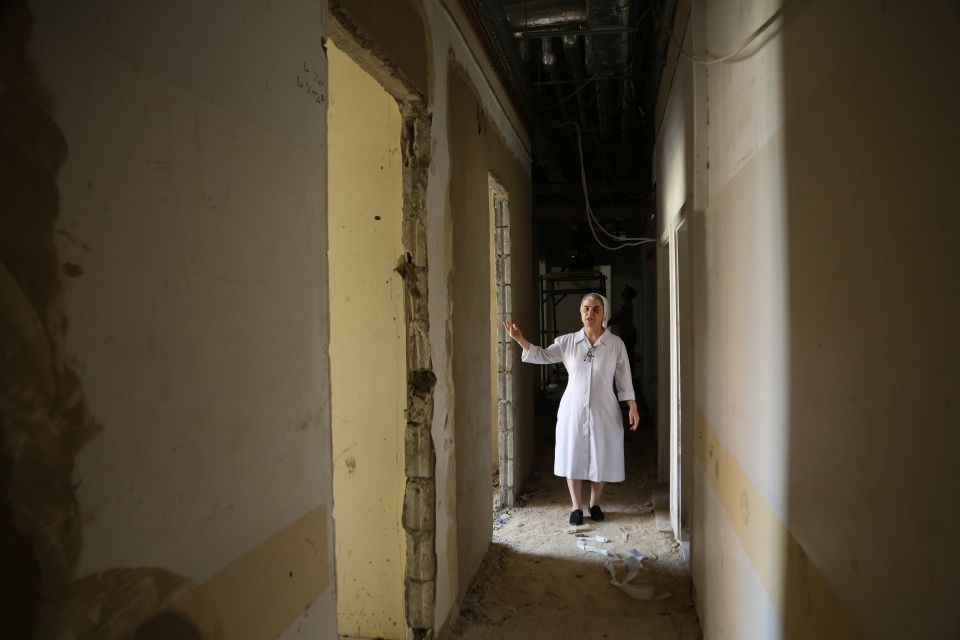 Sister Jeannette El Achkar gestures as she shows a part of Lebanese Hospital Geitaoui still under construction in Beirut Oct. 12, 2021. The health care sector in Lebanon is being crushed under the weight of multiple crises that are only getting worse, say the co-administrators of one of Lebanon's most important hospitals. (CNS photo/Raghida Skaff, courtesy CNEWA)

The health care sector in Lebanon is being crushed under the weight of multiple crises that are only getting worse, say the co-administrators of one of Lebanon's most important hospitals.

Geitaoui, a teaching hospital affiliated with Lebanese University's faculty of medical sciences, was heavily damaged by the Beirut port blasts in August 2020 to the tune of $7 million.

Just over one year after the blast, 80% of the damages are repaired and 200 of its 260 beds are operational. The radiology unit and the intensive care unit are still under repair, as are its administrative offices.

Charged by the Holy See's Congregation for the Eastern Churches, CNEWA coordinated some $1.58 million from worldwide Catholic aid from partners to repair or replace windows and aluminum framing, elevators, fire doors, ceilings, a generator, biomedical equipment, the HVAC system and other mechanical work.

With this mandate from the Holy See to aid post-blast Lebanon, CNEWA has raised $4.9 million from its church partners to date. CNEWA has allocated these funds to five main areas: health care, food assistance, home repairs, small-business recovery and restoration of religious houses.

Two Catholic health care facilities, Geitaoui and Rosary Sisters Hospital, and about a dozen medical clinics and dispensaries were among the health care recipients.

Immediately after the blast, Sister Hadia said, the priority at Geitaoui was to secure treatment for their patients with critical and chronic conditions. The hospital campus houses the only burn unit in the country, as well as one of the few pediatric oncology units.

Patients who required dialysis or chemotherapy received treatment, even the day after the explosion, either outdoors or in lobbies and corridors, said Sister Hadia. Despite the hardships, the hospital never closed, and the provision of care was uninterrupted, she added.

"Our saying during that time was, 'God will help us because we are caring for the weak,'" said Sister Hadia.

However, the hospital is now facing a crisis greater than the blast, said Sister Hadia: "Our greatest concern now is the retention of our staff."

Yared reported that nearly 90 nurses among the hospital's 600-member staff resigned in the past year and immigrated to Europe or other countries in the Middle East in search of stable work amid Lebanon's ongoing sociopolitical unrest and economic collapse. The hospital has been unable to find replacement staff fast enough.

"It is a matter of life and death. We cannot function without our nurses and doctors. They are crucial," said Sister Hadia.

The hospital directors said their options for financial support are dwindling. The hospital has taken on hefty bank loans in recent months to cover skyrocketing operational costs, caused by the ongoing devaluation of the Lebanese currency.

"This is a huge threat to our mission, a very severe crisis," Yared said, adding that the hospital is seeking funding to cover at least 25% of nurse salaries in U.S. dollars as an incentive to try to retain them.

Many patients are unable to cover the cost of the primary or emergency health care services they receive, let alone shoulder price increases. While no patient in need of critical or emergency care is refused, said Yared, the hospital has begun to refuse patients for elective surgeries and has reduced its capacity to 150 beds for the time being.

"I suffer each time we refuse a patient, but there is not much else we can do," said Sister Hadia, who, along with her fellow Holy Family Sisters who work at the hospital, has given up her salary. "We are looking to survive, to retain medical staff and to assure training for our medical students. We're not looking to earn a profit."

Without assistance, Geitaoui Hospital is facing possible closure for the first time in its 96-year history, said Sister Hadia.

"We hate to think that, but that's the reality," she said.

Michel Constantin, CNEWA's regional director in Beirut, noted that Catholic hospitals in Lebanon face the additional challenge of not having endowment funds on which to rely.

In Houston, #RallyNuns may be Astros' secret weapon in World Series