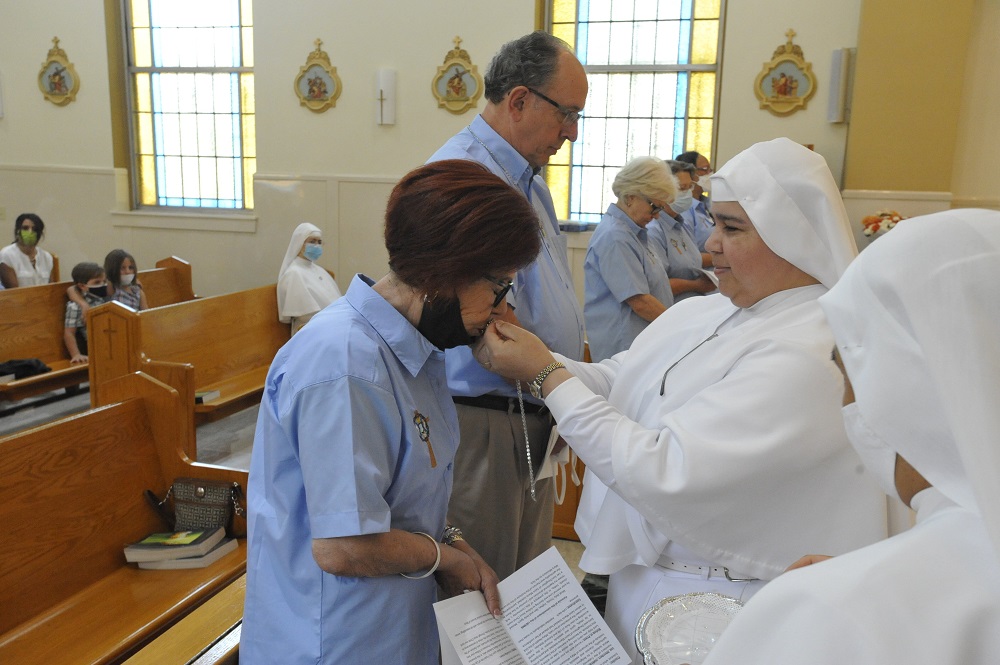 Mother Lourdes García Muñoz presents a crucifix to Elsa Villa, a former Mexican diplomat, to kiss Aug. 7 as Villa and four other laypeople pledged to assist the nuns in caring for those who are terminally ill in their homes. (CNS/Clarion Herald/Peter Finney Jr.)

For over 100 years in the Archdiocese of New Orleans, the Sisters Servants of Mary have kept overnight vigil with the terminally ill in their homes, a ministry of such abundant charity that families caring full time for a loved one can't begin to express their gratitude.

There are nine Sisters Servants of Mary living at the congregation's motherhouse in the Gentilly neighborhood of New Orleans, but the demands for their service far exceed their ability to care for all of those who request their presence.

To expand the reach of their ministry, the Sisters Servants of Mary in early August invested five laypeople — four women and one man — into the Fraternity of the Lay Sons and Daughters of St. Maria Soledad, who founded the congregation in 1851 in Madrid, in keeping with the biblical imperative: "I was sick and you visited me."

This is the second lay fraternity the community established in the United States; the first was in Kansas. The order also has sisters in California.

Mother Lourdes García Muñoz said the five inaugural members in New Orleans have shown the desire in two years of prayer and formation to serve in the ministry of presence.

The new members went through spiritual formation and regular retreats, and they also learned some basic rules, such as how to turn an immobile person in the bed. Most of all, they are there to sit with and pray for the person, giving respite to the main caretaker.

The new caregivers work with the sisters to tailor their schedule for the home visitations, including the length of time of each visit and whether they would go at day or night.

"They become our brothers and sisters and very, very close family," Mother Lourdes said in the convent chapel after the Aug. 7 investiture Mass.

"They are part of us because they are extending the mission. They are the bridge God is using to share our ministry and our charism," she told the Clarion Herald, New Orleans' archdiocesan newspaper.

For Aloma Lykes, a parishioner of Transfiguration of the Lord Parish in New Orleans, the decision to consider joining the new fraternity grew out of personal experience. In the final week of his life in December 2018, her husband, Winston, was cared for by the Sisters Servants of Mary.

"Winston was only in hospice for one week, and it was such a blessing just to have this little bitty nun deal with my 280-pound-plus husband," Lykes said. "She would tell me to go to sleep because I would be up trying to help him go to sleep.

One of the sweetest memories Lykes holds was right before Christmas, when eight nuns walked up the long ramp outside her home and entered to sing Christmas carols.

"Oh, it was wonderful," Lykes said, smiling. "All the neighbors were looking. It was just so special."

The other lay members of the new fraternity are the husband-and-wife team of Susan and Chris Todd, parishioners of St. Patrick Church in New Orleans who are retired from sales jobs; Barbara Hebert, a retired nurse who attends St. Matthew the Apostle Church in River Ridge; and Elsa Villa, a former Mexican diplomat who is a parishioner of Christ the King Parish in Terrytown.

"This will fulfill a need that they have, for sure," said Hebert, whose nursing background gives her extensive experience in caring for patients. "The sisters can't do it all, and I'm sure there's many, many more people in the community that could definitely benefit from all this ministry offers." 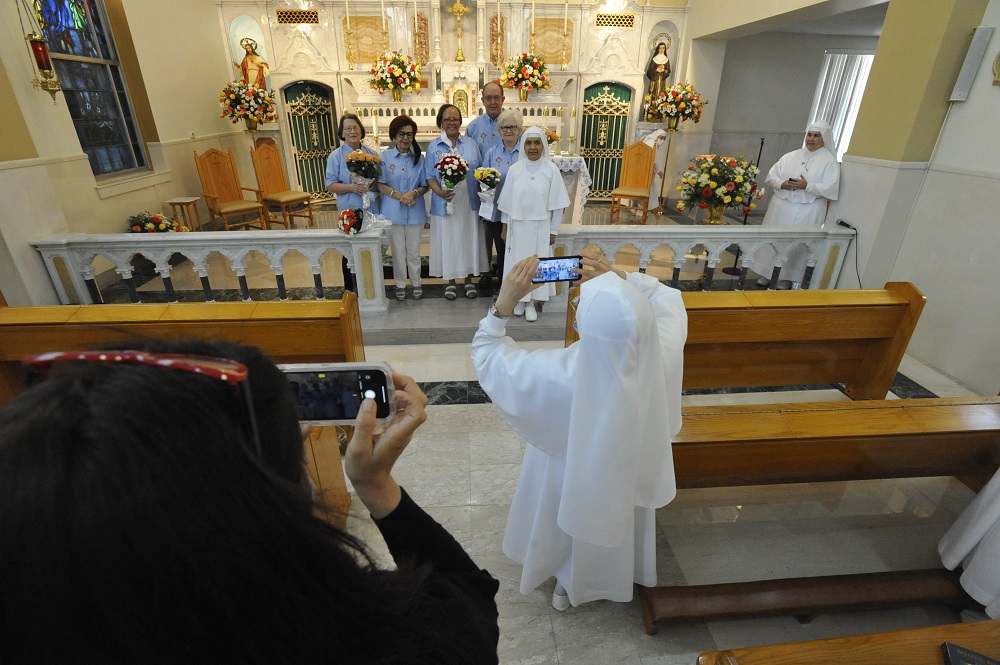 Five laypeople join a lay fraternity that will assist the Sisters Servants of Mary in New Orleans in caring for people who are terminally ill in their homes. The laypeople are, from left: Barbara Hebert, Elsa Villa, Aloma Lykes, and Chris and Susan Todd. (CNS/Clarion Herald/Peter Finney Jr.)

The Todds laughed when asked if they could have imagined themselves being involved in such a ministry. Chris was a sales rep who called on bicycle shops in a three-state area, and Susan spent many years in sales and also taught English as a second language classes at Delgado Community College, where she first met Sisters Servants of Mary who were enrolled to earn an associate's degree in nursing.

"We're still scared — I'm not going to deny that — because it's just the fear of going forward and you have no background whatsoever in helping the sick," Chris said. "It was a big step out."

"What we've learned," Susan said, "is you realize how much of a gift it is for someone to come in, even if they're just sitting there and helping the caregiver. We're not doing anything except maybe praying with them or just basically visiting."

Chris said even a small amount of time off allows a full-time caregiver a badly needed respite.

"It's just to give [the primary caretaker] a break," Chris said. "It allows them to step out of the house, get in the car, maybe scream, cry or whatever, for a bit because they're there 24 hours."

Villa had never heard of the Sisters Servants of Mary until she attended a Hispanic Apostolate gathering at the Pontchartrain Center arena and saw them sitting at a booth. She stopped and started talking to them about their ministry.

"I have received so much from God — so many blessings in my life — that I think I can say, 'I am here for you,' " Villa said. "Not that I consider I would do much, but at least I know how to hold a hand and do a prayer."

Lykes said her first introduction to the sisters was when she and Winston were looking for a Saturday morning Mass and discovered one was celebrated in the motherhouse chapel. She also had seen the nuns regularly at Mass at the former St. Frances Cabrini Church.

She still cannot grasp how much the sisters are living the Gospel message by caring for others so completely.

"They do it all for free. Everything about them is so overwhelming," Lykes said. "When I get stressed about things, Mother Lourdes will write me a note and say, 'It's Divine Providence, Aloma. Don't worry!' "

Mother Lourdes said the congregation is making plans for a second lay cohort. Those who feel they may be called to the ministry are asked to contact her at the motherhouse. She understands those who are retired may be fearful of doing something outside their comfort zone.

"It is always a fear, even for us to take that step and compromise ourselves," Mother Lourdes said. "Because we know they're expecting something from us."

"But, at the same time, we try to tell them that if it's a vocation, you have to feel like it's a vocation," she added, "because you only have to say, 'Here I am,' and you are sent, and whatever comes up is just God's gift. It is actually not us doing it. It is God doing it."