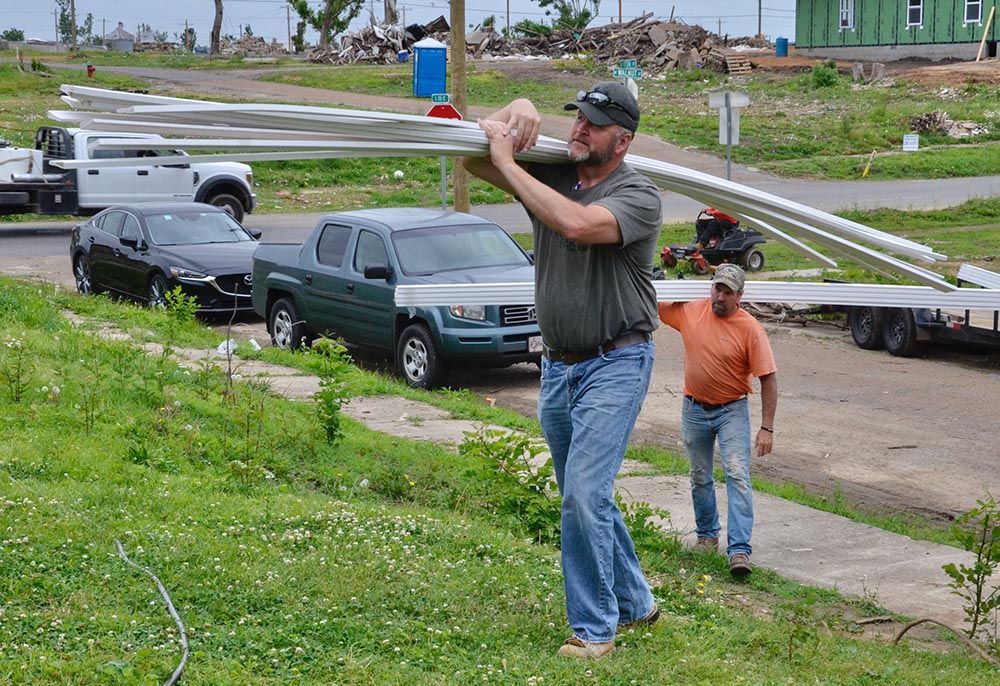 Eric Shelburne, left, and Ronnie Mattingly carry trim to a house where the Sisters of Charity of Nazareth's disaster recovery team is helping a family rebuild May 23 after a devastating tornado in Mayfield, Kentucky. (GSR photo/Dan Stockman)

The candle factory, where nine employees died when the tornado flattened the building the night of Dec. 10, 2021, is now an empty expanse of concrete. At both St. James African Methodist Episcopal and New Vision Ministries churches, only the front façade stands, the rest of the structure a pile of rubble behind it. The downtown fire and police department buildings are empty shells. The historic courthouse is mostly a pile of bricks.

But there is also hope, thanks in part to a group of sisters, associates and lay volunteers. 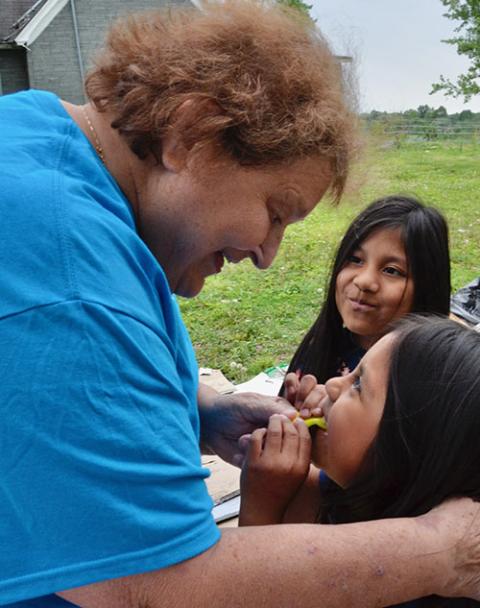 Sr. Luke Boiarski talks May 23 with the children of a family whose home was badly damaged by a tornado in Mayfield, Kentucky, in December. (GSR photo/Dan Stockman)

Sr. Luke Boiarski is director of the Disaster Relief Program for the Sisters of Charity of Nazareth, Kentucky, which travels to aid those in need, whether they are nearby (Mayfield is about three hours from the congregation's motherhouse in Nazareth) or as far away as Belize, where they have made several trips to help build houses.

The congregation had often sent groups of volunteers to help after disasters, but in 2011, the team became a permanent ministry when Boiarski put together a group to help rebuild after a devastating tornado in Joplin, Missouri, that killed 161 people, injured more than 1,000 and destroyed 7,500 homes and businesses. The team has helped more than a dozen disaster-hit areas since. Most of the members of the team are retired, and much of their experience comes from serving on multiple trips with Boiarski.

Boiarski and nine volunteers spent the week of May 23 in Mayfield, doing whatever they could to help people recover from the storm during the day and sleeping in a rectory-turned-youth-center in nearby Fancy Farm, where they were fed and looked after by Srs. Louise Smith and Thérèse Arru, members of the Sisters of Charity of Nazareth.

All told, Kentucky was hit by at least three tornadoes Dec. 10-11, and the one that hit Mayfield did the most damage: It traveled 166 miles, killed 57 people and injured more than 500 others, according to the National Weather Service. In Graves County, of which Mayfield is the county seat, 24 people died and more than 200 were injured. The tornado, with 190-mph winds, destroyed more than 700 homes and damaged another 1,100.

For Josepha Casteñeda, the Disaster Relief Program's arrival at her house is an answer to prayer.

She tells the team members how the EF4 tornado ripped the siding off her house while she and her family huddled inside. Just blocks away, the twister leveled brick buildings.

When she shows the Disaster Relief Program team the work she and her family have done to repair the home themselves, team members tell her to stop: The old siding exposed when the tornado ripped off the vinyl was made with asbestos, and she and her husband had put themselves in danger when they removed much of it to repair damaged wood underneath.

But Casteñeda's fear becomes tears of joy when Boiarski tells her the team will find a contractor to install the new siding — and the sisters will pay for it.

"I'm blessed from God that he brought the sisters to me," she says through a translator from Catholic Charities of the Diocese of Owensboro. "I'm so happy."

At each house, the team discusses how best to use their resources. Siding is in high demand and often must be ordered, so it usually makes more sense to hire a local siding contractor at the sisters' expense than to have the Disaster Relief Program team install it.

Other jobs that require construction skills but are not big enough to hire out, like replacing windows or building a porch, are perfect for the crew of volunteers.

On the first day of their May visit to Mayfield, the team returns to a home they worked on during their previous trip two weeks before, hanging drywall and trimming around windows. The tornado had ripped away some of the home, and part of what is left was nothing but a wooden skeleton. Debris buried everything. The homes next door and across the street were destroyed.

The family wants to do as much of the work as possible themselves, so Boiarski buys them paint and trim.

Volunteer Mary Wagoner, whose husband, Rick, is also on the disaster relief team, spends hours vacuuming dust from the drywall installation so the family who owns it can paint the walls. She explains later that the roar of the Shop-Vac was bearable for that long because she took her hearing aids out.

"We have the time, and we're basically in pretty good health," says Wagoner, who had two aunts who were Sisters of Charity of Nazareth. "We just wanted to give back to the community in some way."

The home's new back door leaks when it rains, so the team tightens the seal, installs a storm door and builds a back porch before moving to the next house, where the front room is damaged and rebuilt but still has no siding. The wood siding on much of the rest of the house is in bad shape, and an upstairs window needs to be replaced. A huge crew from Samaritan's Purse is rebuilding a house nearby — there are construction crews in almost every neighborhood.

The next home the team visits was damaged by the tornado, then caught fire a month later, burning about half of what was left. The family now lives in a camper in the backyard while they save up the $11,500 to demolish the house and start over. The Disaster Relief Program team arranges for a metal carport to be built over the camper to protect it from the baking Kentucky summer sun. 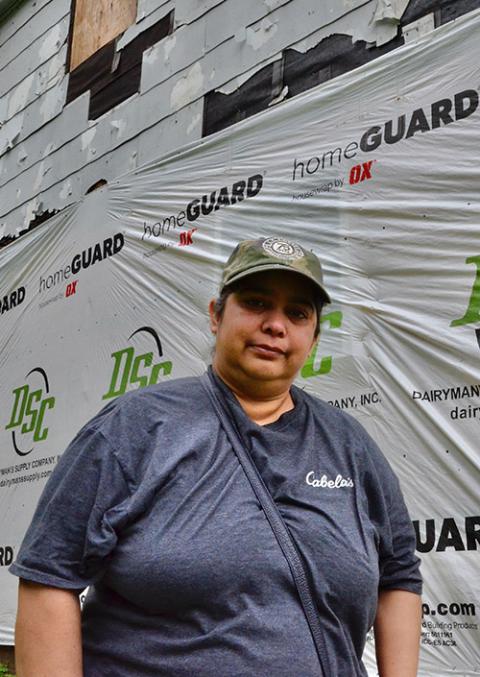 Josepha Casteñeda stands in front of her home May 24 in Mayfield, Kentucky, which was damaged by a milewide EF4 tornado in December. (GSR photo/Dan Stockman)

David White is in charge of keeping the team's trailer full of tools and equipment organized, which the rest of the team teases him about. White's wife is a lay employee of the sisters', and he has been volunteering with the team since he retired seven years ago.

"The sisters, you give them a dollar, and they're going to get a dollar and a dime out of it," White says. "Working with the sisters, it's just amazing what they can do."

Back at the youth center in Fancy Farm, volunteer Ronnie Mattingly and Boiarski swap stories and tease each other. They first volunteered together in New Orleans in 2006 after Hurricane Katrina and continued in an ad hoc fashion for several years.

Mattingly works in construction full-time and brings experience and expertise to the job sites — as well as a near-constant stream of humorous banter.

"You don't have enough paper" for all the stories he and Boiarski could tell, Mattingly says.

At the house with asbestos siding the next day, Boiarski listens to Casteñeda explain that she has four children and is also caring for her sister's two children while her sister temporarily lives in Mexico. Meanwhile, team members are on their phones, working their contacts to find local contractors who may be able to work on her house or who at least know where to get materials.

Boiarski tells her everything is going to be all right.

"Gracias," Casteñeda says to Boiarski over and over. "Gracias."

Related: Sisters of Charity of Nazareth, Kentucky, provide calm and reconstruction after the storms