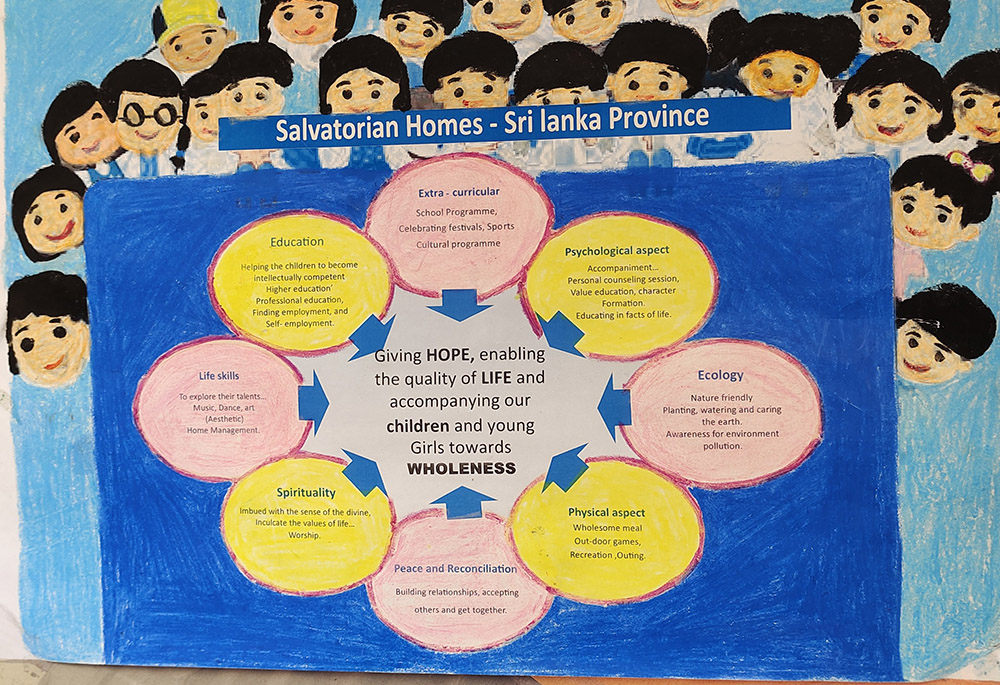 The vision and activities of the Salvatorian Child Development Centre at Ilupaikulam, Mannar, Sri Lanka as depicted by one of the residents. (Thomas Scaria)

Sriya lost her parents and sister in Sri Lanka's civil war, but her eyes still reflect the trauma even after 12 years.

The 18-year-old girl is among some 20 children looked after by the Salvatorian nuns at a village near Mannar, a war-devastated region, more than 165 miles north of Colombo, the national capital.

"We started our mission among the war-affected a few months after the end of war. Sriya was among the first five children," explained Sr. Ranjana Silvapulle, the current director of the Child Development Centre at Ilupaikulam village in Mannar.

The center, set up by the Salvatorian nuns in 2010, a year after the civil war ended, now cares for war orphans and victims of sexual exploitation. Their then-provincial Sr. Dulcie Fernando started the congregation's mission in the war-torn region.

Sri Lanka's 1983-2009 civil war between Tamil and Sinhalese ethnic communities claimed around 100,000 people, mainly Tamils, according to the U.N. estimates. The official registry of the Sri Lankan government, however, puts the toll at 40,000. The final battle killed an estimated 40,000 civilians, including Rajagopal's parents and sister.

When Global Sisters Report visited the center mid-October, Sriya, the eldest among the children, looked cheerful in a new white dress with blue trims. (None of the real names of the children, or photos of them, are being used at the request of the sisters.) 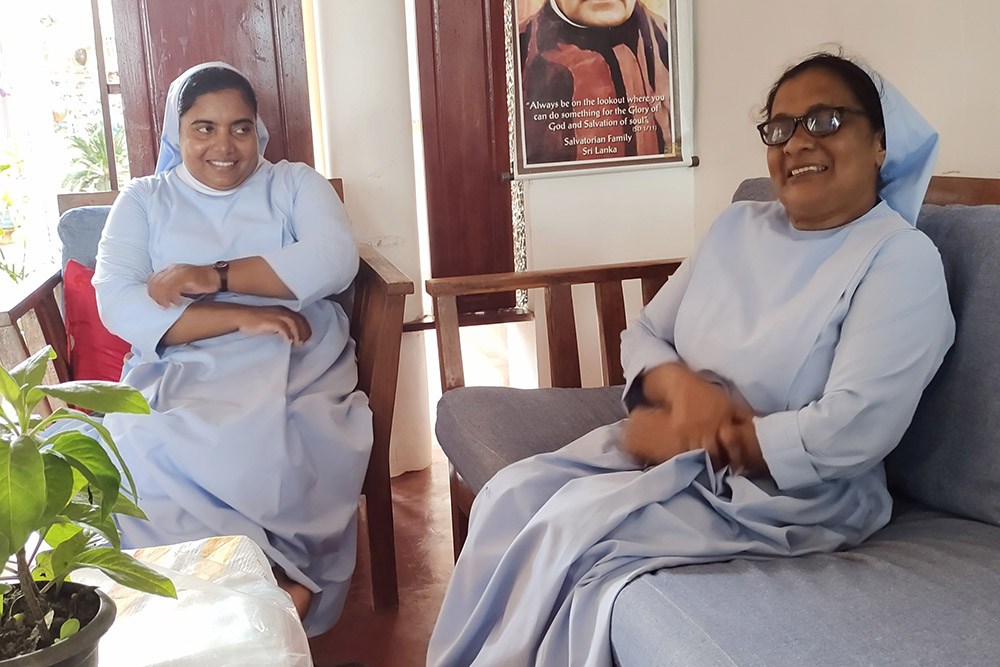 Sr. Ranjana Silvapulle (left), the superior of the Salvatorian Children's Home sits with Sr. Rajeswari Arokyanathan (right) Oct. 16 at their residence in Ilupaikulam village in the Mannar district of Sri Lanka. (Thomas Scaria)

"Today is our Sister Akka's birthday, and we did all these decorations to greet her," Sriya said after singing "Happy Birthday" for Sr. Silvapulle, the convent superior. ("Akka" in Tamil means "elder sister.")

Silvapulle recalls bringing Sriya to the convent as a 6-year-old frightened girl, who was referred to them by their parish priest. "It took several years to bring her to a normal condition," she said. The nuns and the children live together as one family in the center, she added.

Silvapulle said they did not have a convent at Ilupaikulam, so the nuns and children initially stayed in a thatched shed in the church compound with the army present everywhere.

Gradually, the government allotted a marshy plot at Ilupaikulam for the sisters to rehabilitate the war-affected children. The place is about 40 miles from the national Marian shrine — Our Lady of Madhu — that sheltered one of the largest refugee camps in Sri Lanka during the war.

The then-Resettlement Minister Milroy Fernando laid the foundation stone for the center on Aug. 6, 2010, with Bishop Rayappu Joseph of Mannar present.

Salvatorians pooled resources from various countries and built the center at a cost of 1.5 million Sri Lankan rupees ($14,000 at that time).

Silvapulle showed the dining room where the children were waiting for the festive lunch — a specially prepared seafood meal with crabs and lobsters. The nuns and the children ate together, amid much laughter and conversation. 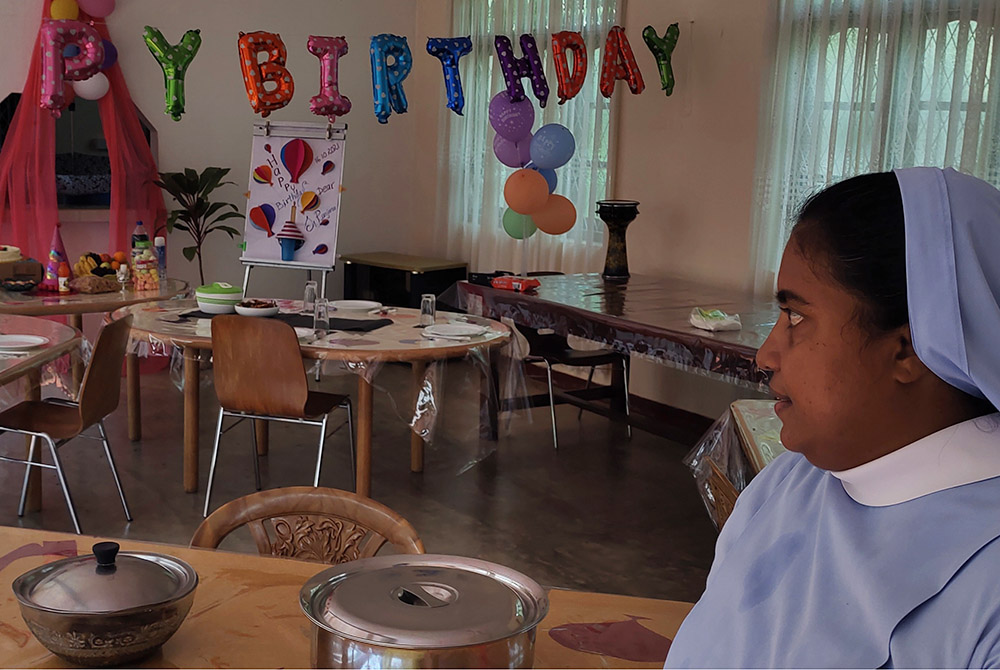 Salvatorian Sr. Ranjana Silvapulle, superior of the Child Development Centre at Ilupaikulam in Mannar, Sri Lanka, looks at the decorations done by orphans on her 40th birthday. (Thomas Scaria)

Silvapulle, a psychologist, says every child in the center has experienced trauma. "Some have lost their parents in the war, some are abused by elders, some sexually exploited and some rescued and referred by the government probation centers," she said.

Joining the conversation, Salvatorian Sr. Rajeswari Arokyanathan, who has worked with such children for several years, said, "what they needed was love and care more than a shelter and food."

While the orphans suffered from a sense of loss and grief, the sexually exploited carried deeper trauma, Arokyanathan said.

Arokyanathan and three other nuns also use various therapies, mental health programs and trauma counseling to help the children lead a normal life. 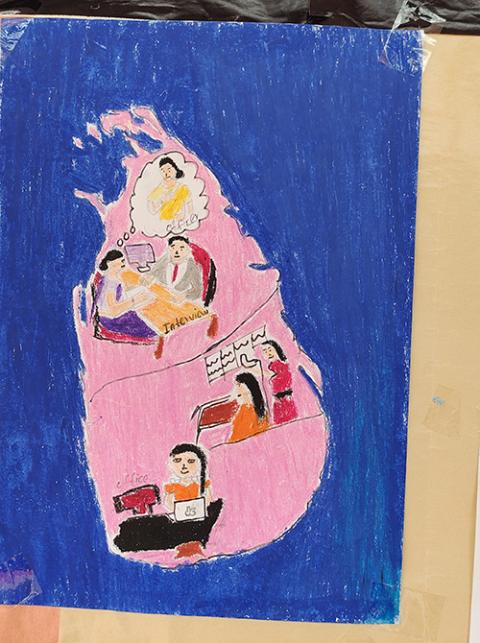 Art therapy is a common program in the center, where children depict their imagination. A picture of Sri Lanka with hope for girl children drawn by a resident. (Thomas Scaria)

Currently, the nuns get the children referred from government probation homes and they are regulated by the government rules and policies, Silvapulle said. Many are sex abuse victims rescued from government rehabilitation camps called "Manik farms." ("Manik" in Tamil means "jewel.")

The "farms" are refugee camps set up by the Sri Lankan army for Tamil refugees who had surrendered or those who had fled from the war hit areas. The "farms" are crowded with five to 10 people living in one of the several huts put up by the army, "where children are often exploited," said Silvapulle, who has visited several camps.

People are brought from villages to live in camps with basic facilities. "Most of our children are rescued from such camps whenever a case is registered about sexual exploitation of children," Silvapulle explained.

Arokyanathan says most children were forcibly shifted to "Manik farms" as the situation in villages was not favorable even after the war. Most of the "farms" are now closed, but many people remain displaced and homeless. Some have built homes on land allotted by the government.

The Salvatorians run a similar home in Wattala near Colombo, the national capital. It was started after a tsunami hit the Sri Lankan coast in 2004 that left many children orphaned. Now, the center houses children from government probation centers, the Sri Lanka provincial Sr. Shiroma Kurumbalapitiya explained.

The Salvatorian Sisters, also known as the Sisters of the Divine Savior, are spread over 45 countries in six continents. Salvatorians have priests, brothers and lay collaborators, besides the nuns.

The nuns have only one province in Sri Lanka with 73 members in 15 convents. They hail from Sinhalese and Tamil ethnic communities and are engaged mainly in social apostolates.

After the lunch at the Child Development Centre at Ilupaikulam, the girls and the nuns assembled at the reception hall near the chapel for a short cultural program to celebrate the superior's birthday. The walls of the hall were filled with paintings and handicrafts made by the children.

Soundcloud
In this audio clip, children from the Child Development Centre at Ilupaikulam village in Mannar perform a folk song. It's about a happy family and how their home is always like the month of November, which means that month the moon is always full and does not have phases. The song simply means a home is like a full moon, and the happiness and love in the home is always full with bonds of everlasting love. The inner meaning is that a family bond is everything that makes a home. It means a lot to children who have been deprived of their family and home with biological parents and siblings.

They sang folk songs in Tamil as Sriya played a local drum made from bamboo in honor of their "akka," who turned 40 on Oct 16. Then came a brainstorming about their roles and duties in the housekeeping and schedule of such duties.

Many said they are happy staying with the sisters.

They enthusiastically described how they prepared for the big day of their "big sister." Each one vied to show what they had prepared and explain how they managed to get the materials.

Seetha, another teenager around 16, narrated how each one contributed to the preparations: "We slept very late last night and sisters encouraged us to put up a good show."

She said her own birthday was also celebrated recently in a grand way and "everyone wished me and offered flowers and chocolates." 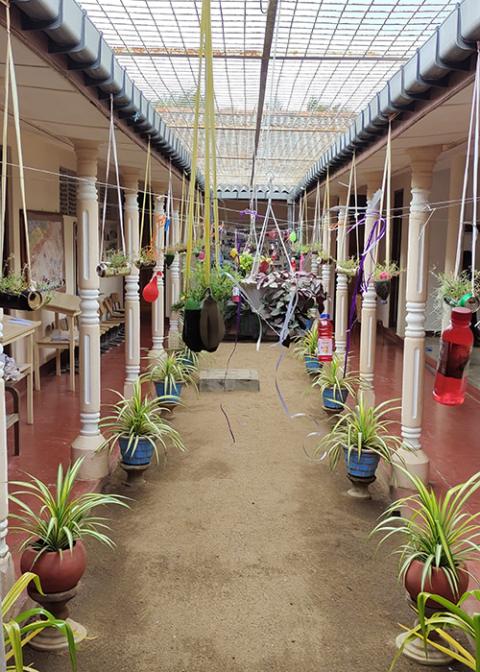 The children orphaned by Sri Lanka's civil war and victimized by sexual exploitation decorated their house, the Child Development Centre, to celebrate the birthday of their superior sister at Ilupaikulam, Mannar, the northern town of the island nation. Birthdays of the children also celebrated in a similar way. (Thomas Scaria)

Arokyanathan said they celebrate children's birthdays in memorable ways. This helps them forget their past and look forward with hope, she added. Silvapulle says celebrations serve as a therapy to heal children's stress disorders.

The children get up at 5 a.m. and after they wash, do yoga and meditation at 5:30. Common prayer is at 6 and then they clean the house and compound for an hour from 7. They then eat breakfast and leave for school by 8:30.

The school closes at 2 p.m. After lunch, the children have gardening, play games, watch TV, and do studies and prayer. All go to bed by 10 p.m.

Every child is given a specific duty. Rose Mary, 12, is in charge of the dog and cats at the center, and Savitha, 10, looks after the chickens.

Each one is also allotted a portion of the garden and "we compete with each other in maintaining our area well," Savitha said.

The nun recalled Sriya giving them a tough time as she refused to go to school.

"We tried to get her educated, but she never wanted to go to school, or play," said Silvapulle.

Sriya said she was frightened of sounds and people. "Whenever I go out I get the feeling of being attacked," she told GSR.

The nuns sent her for vocational training and she started doing well. She also sings well and plays a small drum.

"I feel safe living with the sisters, and singing and playing drums also help me," she says.

The government rules stipulate that children after age 18 should be reintegrated to society with some jobs or handed over to their family.

"We don't know where to send Sriya, but we are trying to get her a job and reintegrate her back to the community," Arokyanathan said.

In an interview at the provincial house in the regional capital of Kurunegala, the provincial Kurumbalapitiya said the sisters' mission among children is their priority apostolate and they plan to take up more such projects.

"Salvatorians are engaged in social apostolates in Sri Lanka and one of our priorities are children from difficult circumstances," said Kurumbalapitiya. "We don't run schools in Sri Lanka, but we ensure children are not denied education."