Q & A with Sr. Agatha Chikelue, committed to building peace in Nigeria 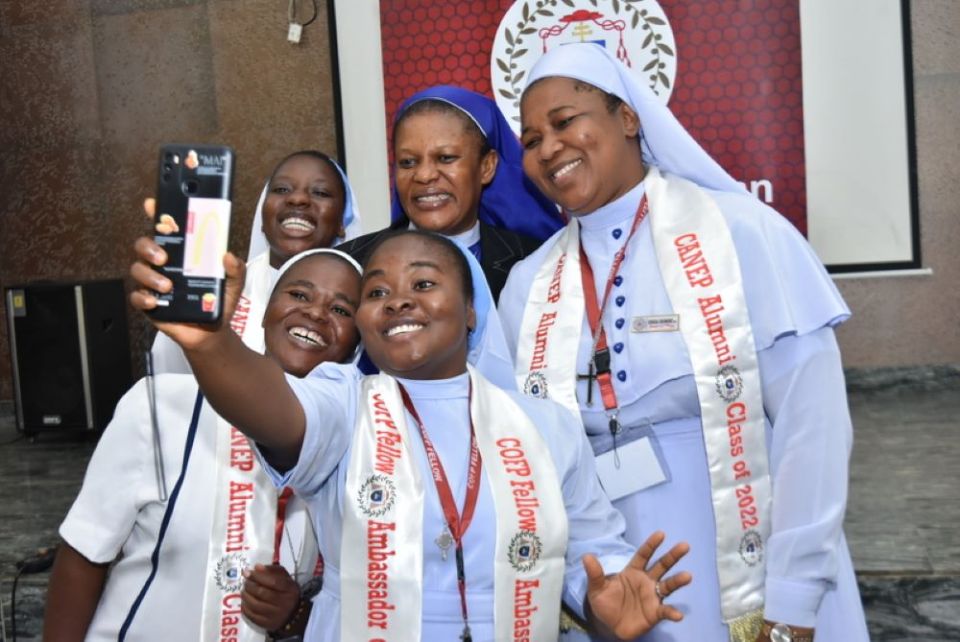 Sr. Agatha Chikelue, top row center, poses with participants in the Fellowship Program of the Cardinal Onaiyekan Foundation for Peace at their June graduation in Abuja, Nigeria. (Courtesy of Stephen Udama)

When she was an infant, Agatha Chikelue became gravely ill. Her parents took her to hospitals near their home in southeast Nigeria, but the doctors could not offer a diagnosis or cure. Her parents feared their young daughter might die.

Agatha's father told his brother, a follower of traditional religion, about her plight. Agatha's uncle consulted the gods and learned that Agatha was a reincarnated river goddess, and unless a ritual was performed to separate her from her former incarnation, she would never marry or have a normal life, if she even survived her illness.

Agatha's mother, a devout Catholic, was decisively opposed to the ritual. Agatha eventually recovered. And when a call to religious life resolved teenage Agatha's indecision about whether to attend university or marry one of her suitors, her uncle's prophecy about Agatha's fate arguably proved accurate.

Sr. Agatha Chikelue, 48, is a member of the Daughters of Mary Mother of Mercy, an indigenous order of Catholic sisters founded in southeast Nigeria, the country's Catholic heartland. She is also one of the most respected organizers of programming around conflict resolution and interreligious dialogue in a highly fractious nation of more than 200 million people, where generational traumas, poor governance and widespread corruption amplify long-simmering ethnic and religious tensions, especially between the country's predominantly Muslim north and Christian south.

Chikelue, who established the Liaison Office of the Archdiocese of Abuja, currently serves as executive director of the Cardinal Onaiyekan Foundation for Peace, which supports programming to build and strengthen processes of peace in Nigeria and Africa at large. Chikelue discussed with Global Sisters Report her personal history, the nature of her spiritual vocation, and the influences and experiences that have enabled her to develop her skills as an activist and pursue her passion for peace building. 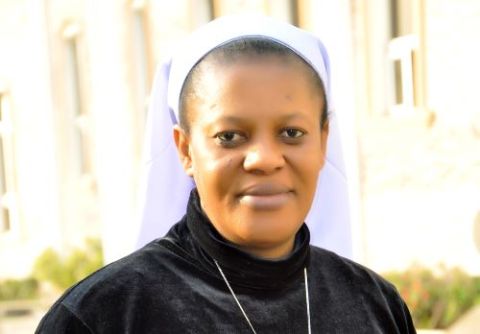 GSR: What does it mean to be a Daughter of Mary Mother of Mercy?

It is a life of prayer, of bearing witness to the mercy of God. For somebody like me, this translates into the kind of life I want to live. My thinking, my behavior, my apostolate — I try as much as I can to bring in these attributes of my congregation.

When did you begin to consider living a consecrated life?

As a young girl, it didn't cross my mind to become a nun. My dream was to go to a higher institution, and I wanted to be a lawyer. I wanted to marry a respectable man who would take care of me, my siblings and my parents. It's the African extended family: I wanted to marry somebody who will know that I come from a family and that I will not just abandon my family. So, I was just building that kind of beautiful castle for myself.

Now, when I was in secondary school — what you would call high school — around my third year in the school, I had a dream. I saw myself putting on the dress of the sisters, and I was in the midst of the sisters. In the morning, I said, "God forbid! I reject this. I don't want it. I don't want to be a sister." I brushed it off my mind, and I continued my studies.

When I finished school, the suitors were already coming. In Africa, we have stupid people who want to marry little girls as early as 14, 15, 16 years old. I was 16 years old, and suitors started coming. But my parents wanted me to attend a higher institution before I could get married, so they refused.

As much as I tried to brush away that dream, a small, quiet voice kept coming to me: "You know, child, this is not your place. You will not find joy where you're going." When I was supposed to enroll for my university education, I couldn't make that decision.

How did your parents react to your indecision?

When I got to this point of indecision after secondary school — when I was supposed to either get married or go on to a higher institution — my father remembered what his elder brother had told him about me when I was still a child, and that made him have serious issues with my mother. My father reminded her of the illness in my childhood and said, "Have you seen what my brother said years ago? I warned you, I told you, you refused. Have you seen that thing happening? Now, Agatha is of marriageable age, she cannot get married or go to higher institution. She doesn't know what to do with her life." And that was exactly my situation then!

What prompted you to finally pursue consecrated life?

I was passing some children playing soccer in the street. One called out to me, "Excuse me, excuse me, excuse me, Auntie." I turned, and this smallish boy — like 7, 8 years old — was smiling and kicking his ball and came close to me. And he said, "Oh, Auntie, all I want to tell you is that you better stop running, just stop running, just go and answer that call. Better stop running and just go and answer that call." And he smiled and ran back to continue to play soccer with the rest of them.

So, I prayed, and I'm like, "God, you know this is not what I want. And I am doing this because now I am convinced that you are calling me and that you have a purpose for me there. I beg you, please do not disappoint me. Don't allow me to regret heeding this call!"

That was how I embraced my religious life. And I am telling you the gospel truth before God and man: Since I became a nun, I have never had anything to regret for being a nun. That doesn't mean that everything has moved smoothly for me, but I always find something that keeps encouraging me, something that keeps me going, something that will tell me, "That is why you are here, to do it right." 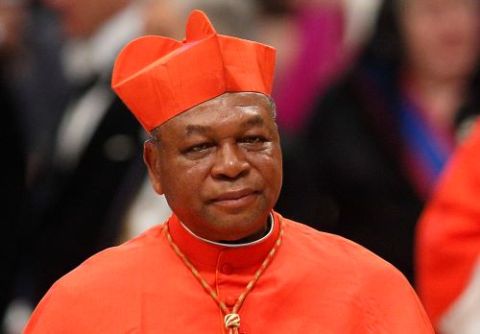 How did you end up working in the Archdiocese of Abuja with Cardinal John Onaiyekan, one of the most respected religious figures in Nigeria?

I studied at the University of Abuja. The cardinal from time to time — then, he was archbishop — would come for a confirmation service or a pastoral visit. One of the times when I met him, he said, "Sister, what course are you doing?" I said, "I'm doing public administration." He said, "Wow, that's fantastic! You know what? There's an office I've been planning to start [the archdiocese's Liaison Office], but I've not gotten anybody who has the qualification for the job. I think I'm going to speak with your superior and see if she can send you after your studies to come and set up this office for us."

Six months before I ended my studies, he did write my superior, and with that degree in public administration, I was posted to work in the Liaison Office of the Archdiocese of Abuja. The office works with state, national and foreign governments, human development organizations, NGOs. We study their programs to see how the diocese can partner with them and how the people can benefit from their programs. 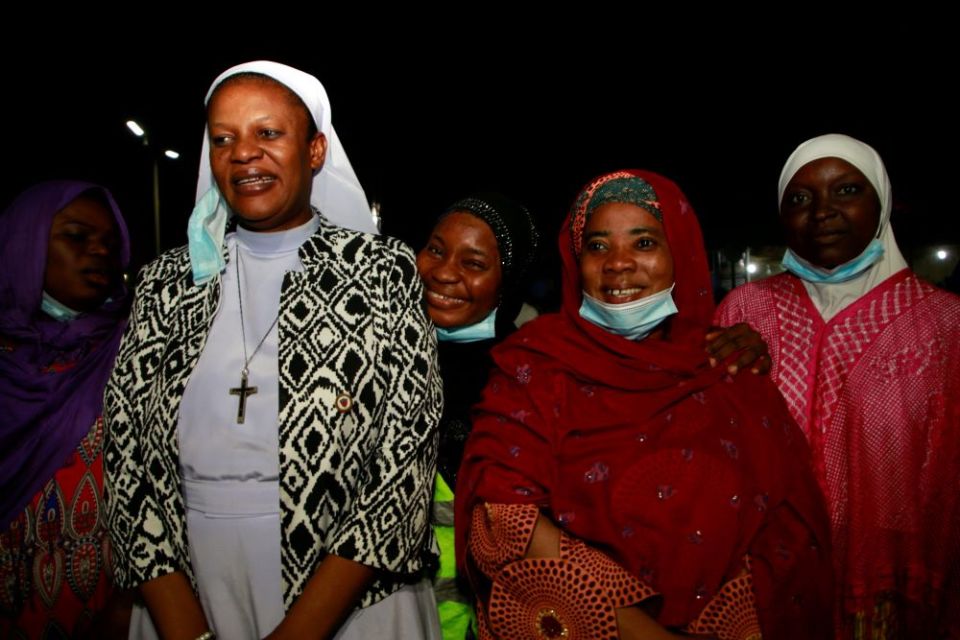 Sr. Agatha Chikelue, left, executive director of the Cardinal Onaiyekan Foundation for Peace in Abuja, Nigeria, stands with Muslim women after they broke their fast at Al-Habbiyah Mosque in April 2021. (CNS/Reuters/Afolabi Sotunde)

There must have been a learning curve for you. You grew up in a predominantly Catholic and Igbo part of the country that wanted to secede during Nigeria's civil war (1967-1970), and there's still tension between some Igbo Christians in the southeast and ethnic/religious groups in other parts of the country, particularly Muslims in the north. The Nigerian government committed atrocities against people in the secessionist region of the country, including indiscriminate bombing and mass starvation. How did that shape you growing up, and how does it inform the work you do now?

There was a lot of on-the-job learning. As a child, I did not see much of the impacts of the Nigerian civil war, but I would hear my parents tell the stories. I heard stories of families who were slaughtered through a bomb blast or who were starved to death. These stories created demarcation and division, hatred between the Igbos and the Northerners, especially between the Christians in the east and the Muslims in the north.

In my new job, I had to meet with people I did not trust who were on the other side of the divides in Nigeria. I would get irritated sometimes and would not be interested in listening or interacting with them. But since this is part of my job, I did not want to disobey the cardinal.

In time, I began to pay attention to what they had to say and saw that they were speaking in all sincerity. I realized that our fears are their fears, too. Their worries are our worries, too. And we are trying to see how we can get out of all this. They, too, are also trying to see how we can live in peace. I thought, "Wow, we actually have a lot in common, which means that we can brainstorm together, discuss and dialogue for peace." That was the beginning of my interest in interfaith dialogue. I continually learned every day that things are not the way I thought they were. I will call it a kind of education that even people with Ph.D.s may not have.

Sometimes, we're so closed in our thinking. We cannot pry open the windows and the doors as the church has told us to do. Open windows and open doors. Let's get some fresh air.

Cardinal Onaiyekan retired in late 2019 and assumed the role of cardinal emeritus. What have you learned from him that you will carry forward in your own work?

You cannot stay with Cardinal Onaiyekan without learning so much. In fact, the priests that have stayed with him will tell you that what they have learned at the cardinal's dining table is far more than what they have learned in the seminaries and in the higher institutions. I have learned so much from him, and I have become a better Christian knowing Cardinal.

Nick Shindo Street is the senior writer with the Center for Religion and Civic Culture at the University of Southern California.

Ministry | Q & A with Sr. Agatha Chikelue, committed to building peace in Nigeria

Q & A with Srs. Catherine Bashir and Violet Sampour