by Thomas Scaria
Ministry
Q&As
This article appears in the War in Ukraine feature series. View the full series. 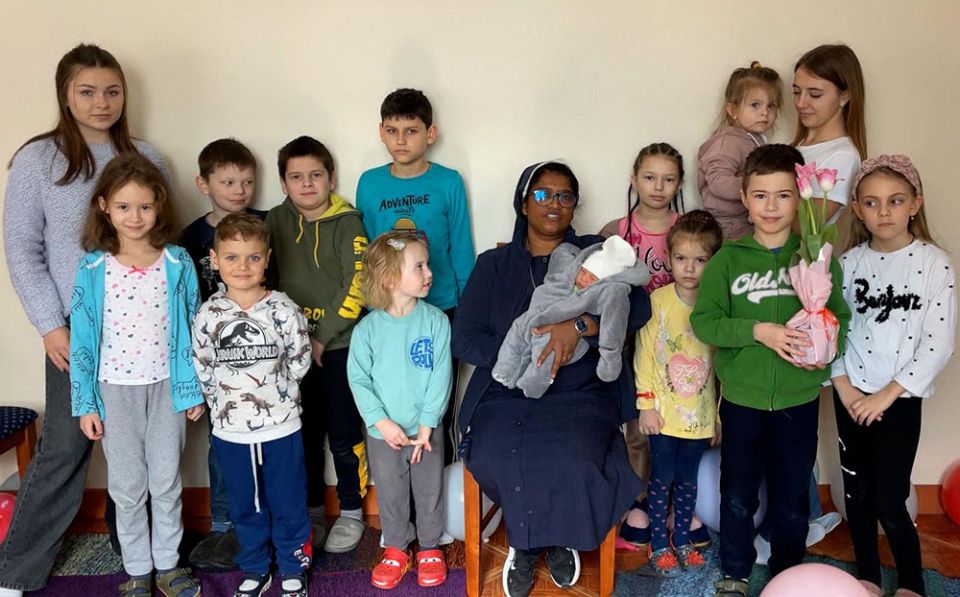 Sr. Ligi Payyappilly, a member of the Sisters of St. Joseph of Saint-Marc, with children sheltering in her convent in Mukachevo, a town in western Ukraine, following the Russian invasion Feb. 24. The baby in her arms was born a day before the first missile hit Kyiv. (Courtesy of Ligi Payyappilly)

Mangaluru, India — Sr. Ligi Payyappilly is worried that the Russia-Ukraine conflict continues, even after passing the six-month mark.

The member of the Sisters of St. Joseph of Saint-Marc has been serving war-hit people since Russia launched a full-scale invasion of Ukraine on Feb. 24.

First, Payyappilly helped evacuate hundreds of overseas nationals, mostly students, in Ukraine. The native Indian nun, who is now a Ukraine citizen, then turned her attention to Ukrainians who have become refugees in their own country. 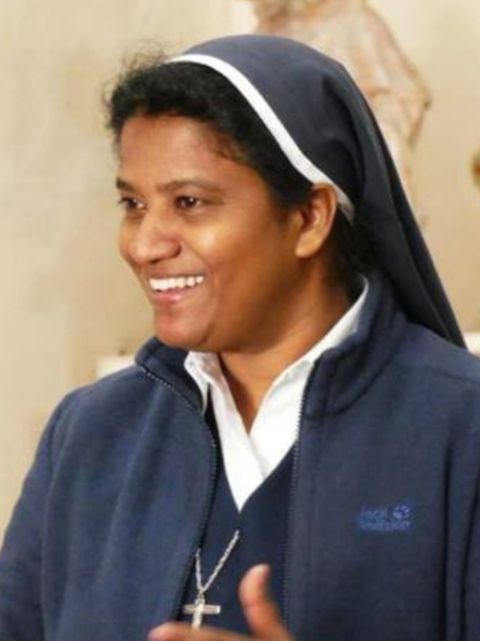 Payyappilly, superior of the congregation's convent in Mukachevo, a town in western Ukraine, had followers across Ukraine as a renowned retreat preacher. She used this network in her rescue operations and refugee services.

In 2019, Payyappilly received an honorary Ukrainian citizenship as an acknowledgement for her services to the country. She says she is the only Indian to get this citizenship in Ukraine.

Payyappilly spoke to Global Sisters Report about her mission in Ukraine against the backdrop of the Russia-Ukraine war.

GSR: How do you assess the situation in Ukraine today as the war completes six months?

Payyappilly: The crisis in Ukraine is worsening day by day. But the hopes of the people to get through the crisis too have increased.

Initially, everyone expected the war would end soon. But this is like the war between Goliath and David. Russians are mighty and powerful; Ukrainians are weak but determined. God is with us, and my mind says the final victory will be ours.

People have developed resilience to war and developed coping skills. We are praying for justice to be done soon.

Did you expect the war to last so long? Why is the war dragging on?

The war went on for so long because the Ukrainians have decided to fight back and never give up. The mighty Russians thought they could finish Ukraine within a week. No doubt, we have a leader who fights from the forefront, and the Ukrainians have also enjoyed a sort of world support. 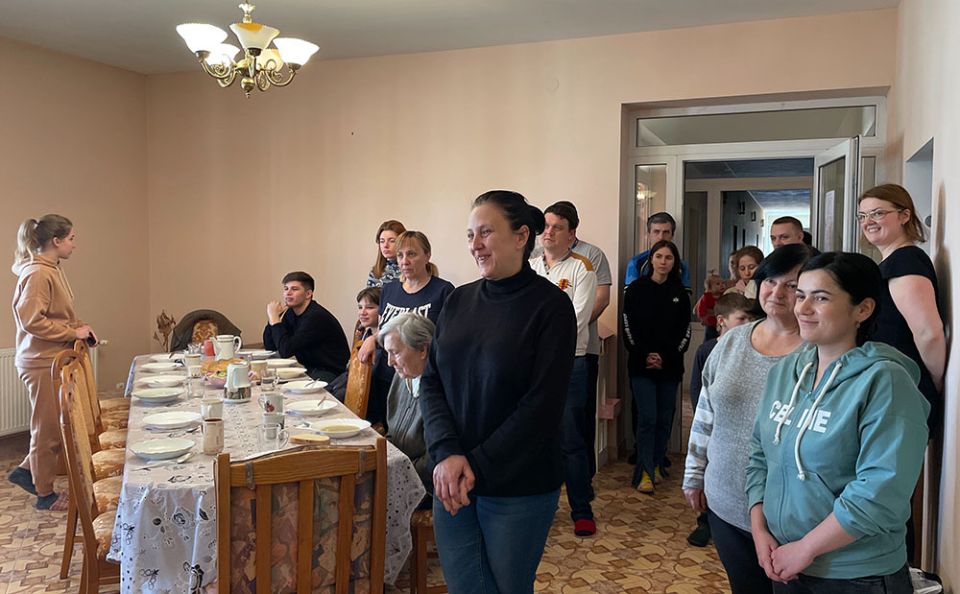 Ukrainian refugees wait for breakfast in March at the convent of St. Joseph of Saint-Marc in Mukachevo, a town in western Ukraine. (Courtesy of Ligi Payyappilly)

How do you look at Ukraine's future? Have you lost hope?

Certainly no! I want the war to end soon, but I also want Ukrainians to win. They have all the reasons to win this war. The end of the war should be the beginning of freedom for the Ukrainians. They fight with hope. Some have lost their entire family and some, their loved ones. Some have been wounded, but they still continue to fight.

These days, I get many prayer requests from soldiers and their families. We are praying for them and their victory.

Could you summarize what you and your sisters have done in the past six months?

We had no particular strategy to respond to the crisis. We just responded to the immediate needs of the people who knocked on our doors. Our first mission was to rescue and help foreign students trapped in the country. This was challenging, as the war started suddenly and intensified within days.

The second stage was to help Ukraine's own refugees, mostly women and children. We accommodated a number of them at our convents, giving them our own rooms and the sisters staying together in a hall. 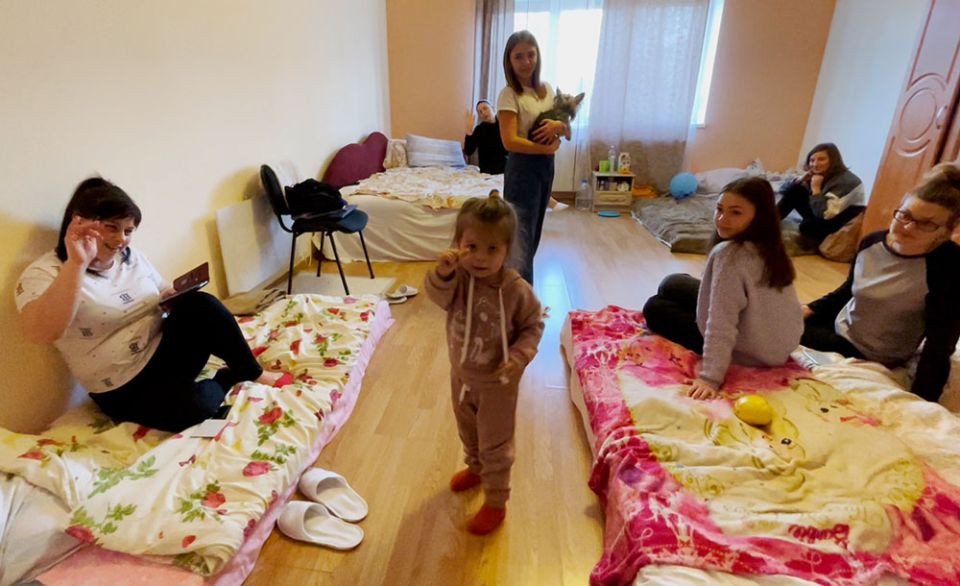 Refugees relax in their dormitory at the Convent of St. Joseph of Saint-Marc in Mukachevo, a town in western Ukraine. (Courtesy of Ligi Payyappilly)

We then opened our convent as a retreat and prayer center for people to come and take solace. Our new retreat center has become a "powerhouse" for people, soldiers and family members to seek God's intervention. We also managed our old-age home during the crisis.

How was your experience of helping international students? Are you in touch with those you helped evacuate?

Yes, our first mission was to help overseas students trapped in Ukraine with no specific eviction plans. The Indian Embassy helped their students who were under the care of their universities. But there were a lot of scattered students who were panicky and frustrated. We tried to reach out to them.

Some had ventured into the battlefields and walked miles to reach the border areas. Some were trapped in bunkers. Many Ukrainians who were part of our retreat programs came to their rescue and shared my phone numbers with them. We coordinated their passage. My connections with many officers really helped. 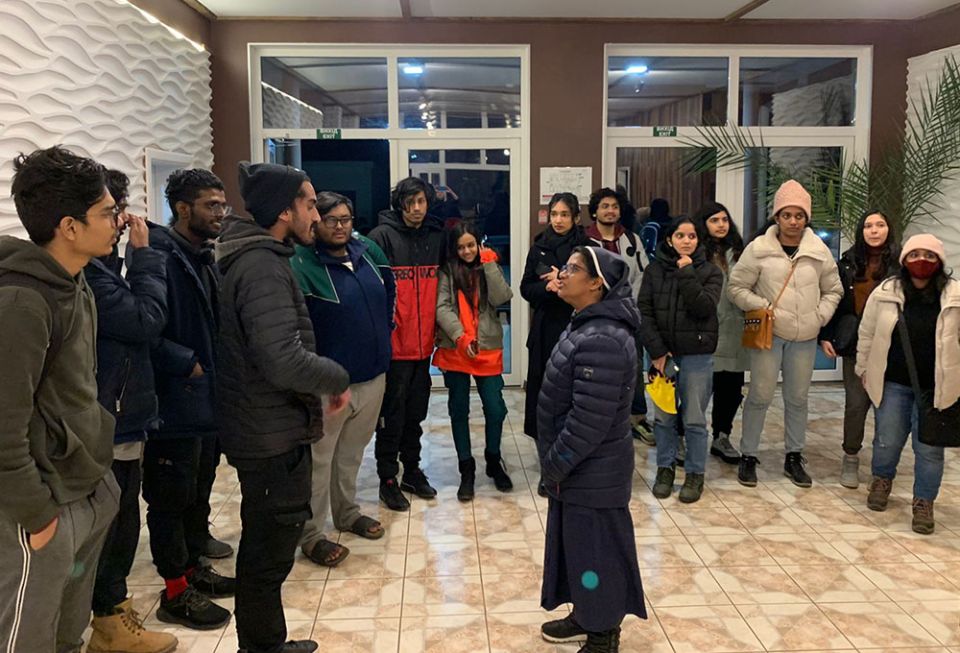 Sr. Ligi Payyappilly, a member of the Sisters of St. Joseph of Saint-Marc, with international students at her convent in in Mukachevo, a town in western Ukraine (Courtesy of Ligi Payyappilly)

I drove often our convent vehicle with the stranded people to cross the border. Some still keep in touch with us.

What made you open your convent to the Ukraine people?

The Ukrainian president had asked the men to stay back for fighting while women and children had to move toward safer places. Many sought refuge in neighboring European countries, but some opted to stay in safer provinces within the country.

We converted our convent into a refugee home in the first three months. We cooked for them, prayed together, sang songs, played music and adjusted our timetable to the needs of the refugees.

A real challenge was the severe winter, and we had to give women and children heated cabins. We did not have heating facilities in every room.

Russian forces now attack refugee homes and thickly populated villages. How do you ensure your safety?

Safety is a concern. But there is no safe place in all of Ukraine, as the enemy has reached almost everywhere. In Mukachevo, we have not experienced an attack so far, but it could happen. We are prepared. 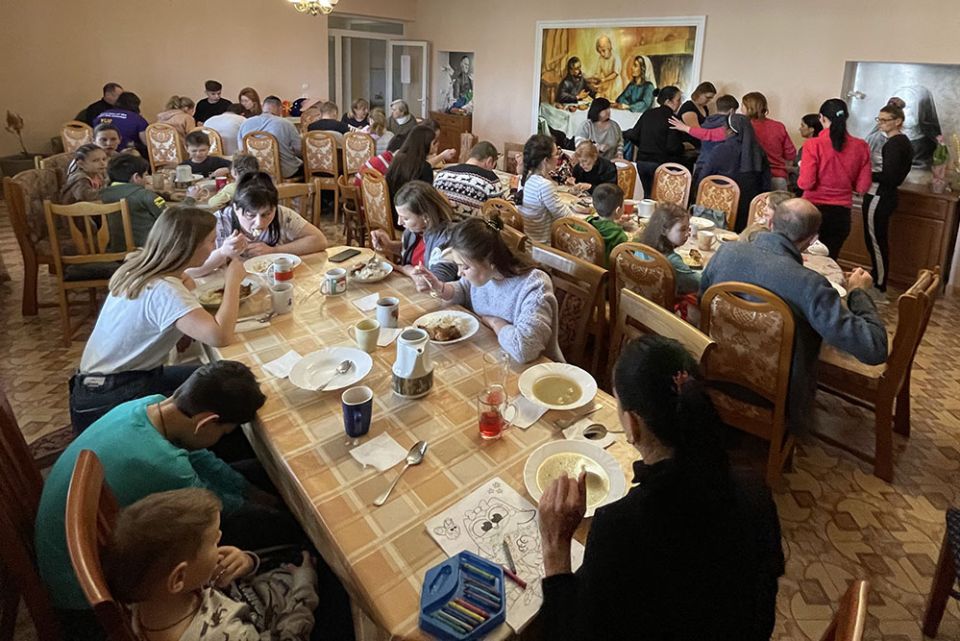 Ukrainian refugees receive food and shelter in the Sisters of St. Joseph of Saint-Marc convent in Mukachevo, a town in western Ukraine. (Courtesy of Ligi Payyappilly)

The president has hinted compulsory military services for even women if such an attack happens. We may have to send our sisters to serve, as well. They are prepared to go. As most of our sisters are professionals, the country may ask for their services. We have 13 native sisters, and the others are from other countries.

Whatever may happen, I will not leave this country because this is mine, too. The country has trusted me, appreciated my work.

How do you manage your funds? Did you get help from international agencies or donors?

Financially, we are not well-off. We could not get any substantial help from international agencies except from our own congregation. We did not make any extra efforts in getting donations, too. Whatever we received were from our own benefactors from within the country. Ukrainians are really generous, and they have supported us more than anyone else. Some parishes in Germany have collected donations for us, too.

Most vulnerable victims of the war are women and children. How do you understand their situation?

I have seen their suffering. The enemy used sexual advancements as a war strategy, and women and children were always the ultimate victims. I have given shelters to several such women who fled the war zones, and they have horrific stories to tell.

One young mother was repeatedly raped for almost a week in front of her infant son before being shot. We have seen television footage of heaps of naked dead bodies of women in some villages. Some were piled up with used tires to be set on fire. With all this suffering and bloodshed, don't they deserve a victory at the end?

How did the Ukraine sisters help you in this crisis?

They are our inspiration, courage and hope. We see Ukraine through them. We are passionate about their dreams, vision and aspirations for their country. They are so patriotic, burn with their love for the country.

They were fully involved in the refugee services, cooking and eating together, singing and dancing together, and giving courage through psychological and spiritual therapies.

How did you manage to promote many local vocations to your congregation?

In fact, I have never done any vocation promotions. We have more than a dozen local sisters in our convent who came to me, expressing their desire to become a nun like me. Most are touched by my retreats or heard about me from someone else. All who came to me were highly educated and talented young girls. 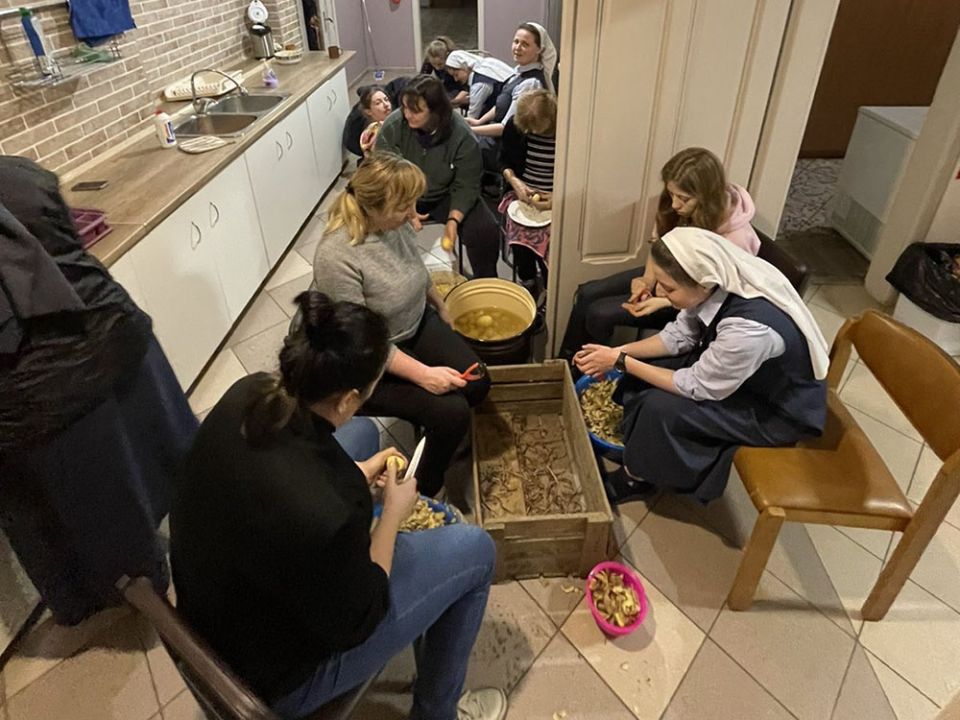 Sisters of St. Joseph of Saint-Marc prepare food for refugees sheltered in their convent in Mukachevo, a town in western Ukraine. (Courtesy of Ligi Payyappilly)

The first members joined me when I had no convent and I was living in a laywoman's home. Slowly, I built a convent, and when more candidates joined, I became a formator. When they became sisters, I became their superior.

Why did you become a nun, and how did you land in Ukraine?

The desire to become a nun was instilled in me as the member of kunju missionary [little missionary], a spiritual movement in Kerala to nurture missionary spirit in children. As a child, I wanted to become a missionary and serve in faraway places.

Later, I joined the Jesus Youth movement, which sharpened my missionary vision. During this time, the superior general of my congregation came to our parish looking for vocations, and I joined them.

After my final profession, my superior sent me to Kyiv, the Ukraine capital, in 1999, where we had a community. In the new place, I developed a serious illness that paralyzed me. The doctors said medicine would not cure me and I would die soon. I was sent back to Kerala, where I was diagnosed with bone cancer. I was bedridden for almost two years.

Meanwhile, I had a vision where God asked me if I would go back to Ukraine. I said if he healed me, I would go. When I got up from my sleep, I could stand up on my own. Within a week, I was completely cured.

As the Good Shepherd Volunteer journey continues, the lessons so far