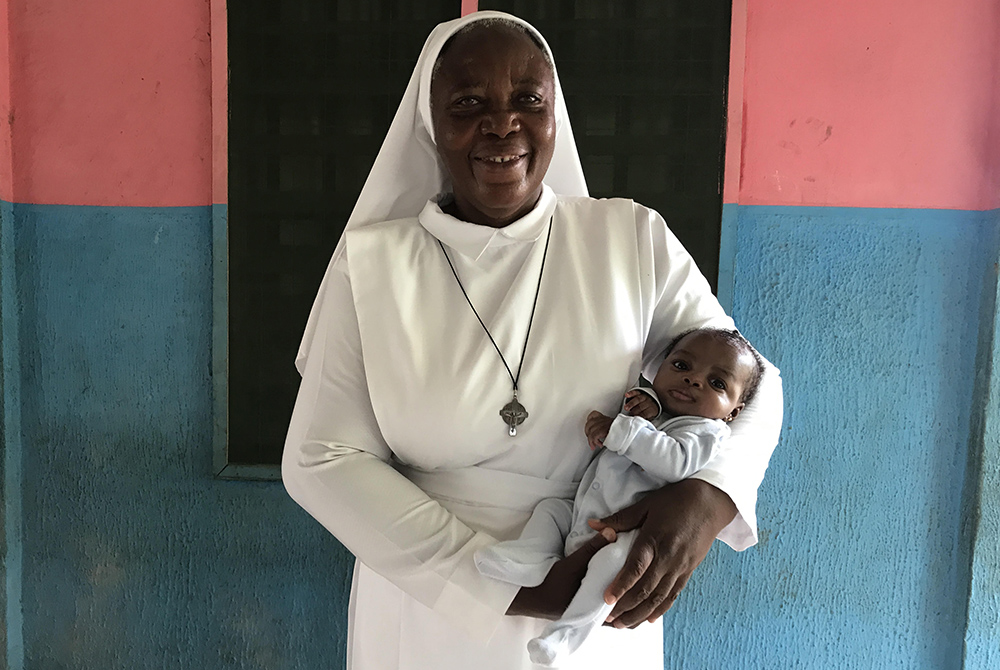 Sr. Matilda Inyang carries a child outside the Mother Charles Walker Children Home on May 7 at the Handmaids of the Holy Child Jesus convent in Uyo, Nigeria. Since opening the home in 2007, Inyang has cared for dozens of malnourished and homeless children from the streets of Uyo; many of them had family who believed they were witches. (Valentine Iwenwanne)

For more than a decade, Sr. Matilda Inyang of the Handmaids of the Holy Child Jesus — one of the foremost religious orders of the Catholic Church in Uyo, Akwa Ibom, one of Nigeria's oil-rich states — has cared for dozens of malnourished and homeless children from the streets of Uyo, many of whom had family who believed they were witches, at Mother Charles Walker Children Home.

Social, economic and religious factors have influenced the rise in belief in witchcraft and black magic, paving the way for some Pentecostal pastors to incorporate witchcraft beliefs into their brand of Christianity, which resulted in violence against children.

Born June 6, 1960, in Kaduna, North Central region of Nigeria, where her father worked as a military officer, Inyang is the second of six children in the family from Ifiayong Usuk in Uruan Local Government Area of Akwa Ibom.

But her journey into advocacy and child's rights protection didn't come right away, though she grew up as a lover of children — she enjoyed cooking for and feeding them.

It was here she began to notice many malnourished children and that those in the streets of Akwa Ibom were hungry.

"I started cooking and feeding them to quell their hunger," she said. "Whenever I cook, I share it among them to eat and be nourished. That's how I came about the idea of feeding the children."

Her work has included fighting adults' superstitions and the accusations of locals that has led to the stigmatization, torture, abandonment and killing of thousands of children. She also helps provide quality education for them. 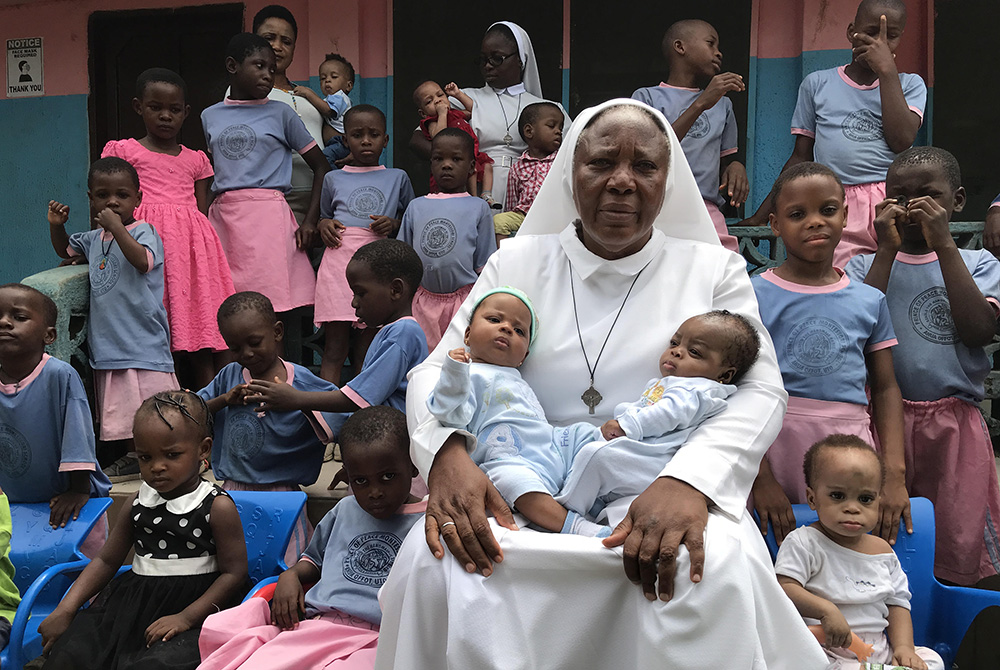 Sr. Matilda Inyang with some of the children at the Mother Charles Walker Children Home, which cares for malnourished and homeless children from the streets of Uyo, Nigeria (Valentine Iwenwanne)

Many children suffer because of the superstition of the adults, and the accusations have become a menace that has led to the stigmatization, abandonment and death of thousands of children. Why is it important to deal with this problem?

Inyang: As humans, we have the right to live; we have the right to choices and decisions in life. This fight against the abuse of children and their rights to live is simply about preparing and spreading adequate information and speaking up on behalf of others to authorities, to bring their abusers to account and live up to their responsibilities to these poor children. It's also about helping them so they know and understand their rights and can demand that they are fulfilled.

How do you teach children and the adults in the communities where they come from about how to prevent the violation of children's rights and how to act in any case of such violation?

For instance, one of our children here was reintegrated back into his village. His father reported to me that he was throwing stones at him. When I asked the boy, he told me that his father and his uncle killed a snake and tied it around his waist, saying that when they do that, it will stop him from peeing in the house. Consequently, he resisted it. He had to struggle with them so they wouldn't succeed in using the snake on him. He didn't fight them in any way; he was just resisting them from using the snake on him.

He said he knows his right. He acknowledged that he wets the bed, but he doesn't want them to use that snake on him. I was happy to hear that from him, so we counseled him and taught him how to be attentive to himself and his mind, to know when nature calls. 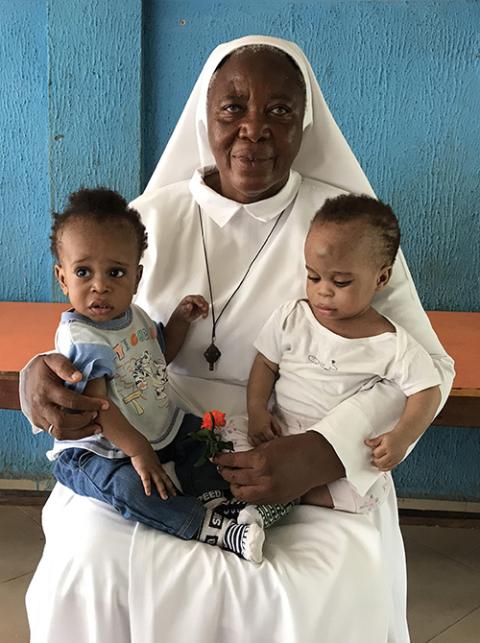 Sr. Matilda Inyang with two children at the Mother Charles Walker Children Home on May 7 at the Handmaids of the Holy Child Jesus convent in Uyo, Nigeria. Many of the children at the home had family who believed they were witches. (Valentine Iwenwanne)

How do you strengthen the position of these local communities to solve the problem of superstitions?

Well, it's not an easy project, and it takes the grace of God because advocacy work requires a lot of strength and time, too. To do this, I visit churches and women's groups to sensitize and educate them about children's rights. I talk to them about the dangers of abuse on children and how it affects their psyches and growth, also. I also go to their village meeting locations, village halls where they host events and other activities, and talk to parents and guardians about knowing the rights of children and keeping to them, too.

How do you strengthen family bonds broken by superstition and accusations of witchcraft before the child is reintegrated to the family?

When a child is labeled as or accused of being a witch and is being sent away, it will break their family bond to a large extent. The family is not going to outwardly tell you what happened because the government has enacted laws criminalizing this as an act of child abuse. So, they will give an excuse that a child ran away on his or her own.

In some cases, depending on the level of acceptance, you'd tell the child to go back home and stay around, monitoring and observing how he's being accepted and treated because they are likely to accept that child, and when you are gone, they'd start maltreating him.

So, pushing this child back without properly strengthening the family bond is a problem because they would still be pointing accusing fingers on him, and when you tell them it's a mere case of misbehavior, they would be watching to see if the child has truly changed from the way he or she was before.

We also strengthen the broken family bonds by having the child live here and going to school, from primary to secondary school. Then, the parents will start showing interest in him, especially when he has gone to the university. They will no longer have any negative impression about that child.

How has the work and ministry impacted your spiritual life, and how is working as an advocate for children's rights a fulfillment of your call?

I have a very strong faith in God, and I believe that God is greater than anything, I believe in Jesus Christ. Whether there are forces or not, I believe in God. I can't go every day without being thankful to God. When I have a problem, I turn to him because he is with me and in me. So, the most important thing to me is his will for my life. Coming to work with the children in that field I can say is giving me that fulfillment. As a Christian, anything you do to the least of my brethren, you're doing it to me.

Does your community help with this?

Looking back how you started, what would you say is the miracle in your life?

The miracle in my life is having God directing me to where he wanted me to be, caring for the less privileged, the vulnerable children. That's a miracle because I was just doing what my congregation asked me to do. This area of having to open a home for the children is a miracle on its own.

Are there plans for expansion of the home?

The facility we have now is an old convent where three sisters used to live. The problem is accommodation, and we have started work on a multistory building that will take about 80 children. And when the new accommodation is ready, the children will be relocated there while the renovation of this old one begins. The challenge now is accommodation, and we are on it. We ask our friends to support us, and people are already supporting us with bags of cement, sand, concrete and iron rods.

But we need much more than that to meet the needs of the children. Two of them will be going to university soon; they have passed their examinations and have been given admission to study. So, a lot of money is involved. Even the children who are already at school at other universities, we pay their school fees and buy them clothes and books, too.