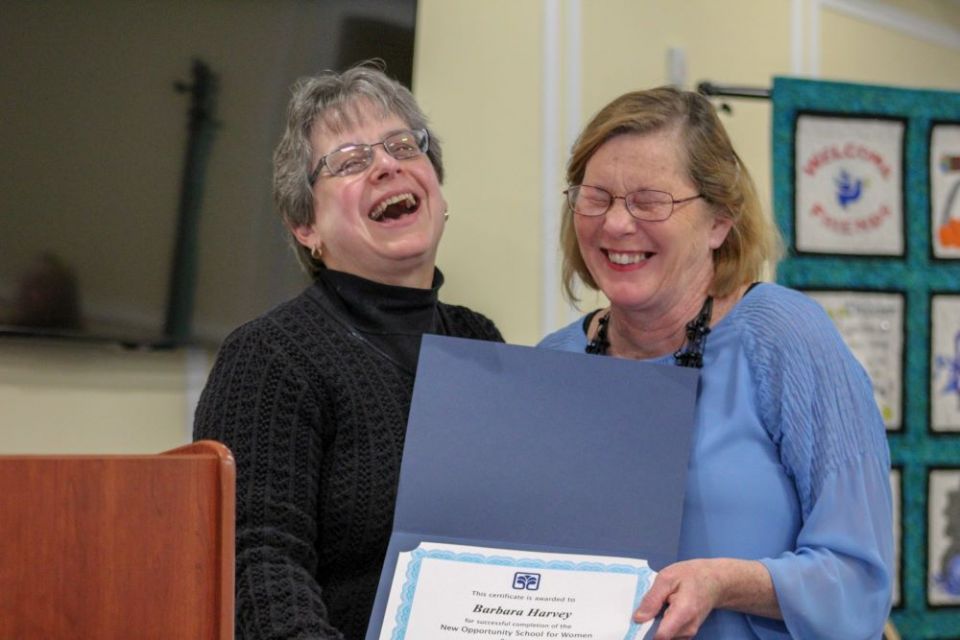 Sr. Robbie Pentecost (left), executive director of the New Opportunity School for Women in Berea, Kentucky, presents Barbara Harvey with a completion certificate from NOSW's two-week residential program in 2018. Harvey and other graduates provided the school’s leadership with ideas about how to serve Appalachian women after the COVID-19 pandemic forced the school to halt in-person classes. (Courtesy of New Opportunity School for Women)

There's a common thread stitching together her ministries.

"I have always been drawn to work with those on the margins, whether it be people who find themselves homeless or who are at risk of being homeless in St. Louis or Appalachian women who often are disregarded even among their families," Pentecost said.

Pentecost has been a member of the Sisters of St. Francis, Oldenburg, Indiana, for 37 years. In 2017, she became executive director of the New Opportunity School for Women in Berea, Kentucky, after having served on its board of directors for two years. The New Opportunity School is an educational outreach program for low-income, under-educated Appalachian women.

Pentecost already had extensive experience in the region. She served as executive director of the Catholic Committee of Appalachia, serving the 26 Catholic dioceses in the Appalachian region and was a major gifts officer with the Christian Appalachian Project 2005-2015.

Since 1987, the New Opportunity School has worked with Appalachian women to overcome obstacles to healthy and fulfilling lives. Their approach focuses on building self-esteem, setting realistic goals and staying connected to women in similar circumstances.

Over 900 women, the vast majority chronically poor and entering the program earning $10,000 or less a year, have completed the school's free two-week residential program. Dozens of others have completed or are currently enrolled in the school's fast-growing three-day non-residential sessions or taking online workshops that teach essential life skills.

When the COVID-19 pandemic struck in 2020, Pentecost was forced to look for creative ways to provide their services to more women. The school ended up expanding its online offerings, an action that brought unexpected success and growth.

GSR: How did COVID affect the New Opportunity School for Women?

Pentecost: COVID taught us that we need to be nimble and responsive. We had been resistant to going online with our work, but we quickly had to pivot. Most of our referrals had been coming from places that had to shut down because of COVID — adult education, social service and recovery programs, domestic violence centers. They were not going to be sending anyone to us.

We decided to immediately reach out to graduates. We found out so much from them. We were worried that people wouldn't be able to connect, but they have adapted and offered support in amazing ways. We've gotten grants and been able to provide nine computers that we can loan out to people. Now if they live in the far eastern part of the state, we can collaborate with community partners to give access. They can go to the facility to use a computer.

We're working right now with the Appalachian Regional Health Care System. They own 14 hospitals, mostly in Kentucky, but two or three are in West Virginia. They have the capability of bringing people online for sessions. We're in conversation with them about doing some work for their employees on topics such as self-esteem, setting boundaries and how to stop that nitpicker in your head from driving you nuts with negative thoughts. If we can help frontline workers cope, I say, yes, let's figure out how to do it. We were resistant to online because we didn't think we could deliver the quality of service that you can in person. We have found that online you can still form community.

What are some of your biggest challenges in steering the organization?

We are a small organization doing big things. We're often just trying to figure out where our place is and how to maintain sustainable funding. One of our biggest challenges is being recognized as a major player in the region. So many of the programs here are either aimed at men or children. Because we deal with women, a lot of times people don't think about us. Women get left behind, and I think there's a lot more room for us to be a key player.

What I love about the work that we do is that we provide the women tools that build their confidence and self-worth in a trusting community of other women. I love helping women come to know the beauty within them — it's a sparkle of God coming alive with each person I meet. The peer-to-peer approach that we use also allows us to see the women as friends and not just students or participants.

Another one of our challenges is shifting the thought that it's not about how many people you serve, but how many people are stable at the end of it. Appalachian culture has some unique characteristics. People can be slow to accept you. I've been here in Appalachia 26 years, so I think I'm accepted a little more, but it takes time. When I first got here, we had served 24 people that year. Last year we served 125.

That’s a big jump — about 400%. Has it been hard to fund the program as you expanded?

Over the past two years we ended up getting two huge legacy gifts. Now we have a very stable reserve. The board of directors was able to complete a strategic plan, and we incorporated additional staff that builds our capacity. Our programming has tripled. 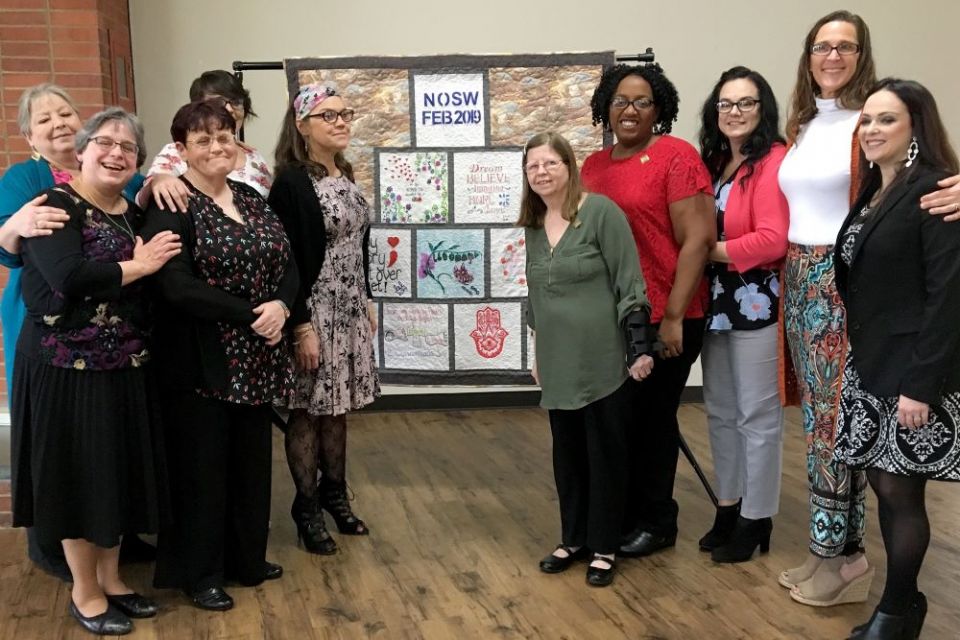 During COVID you postponed your in-person residential program and offered three-day online programs, support for graduates and workshops on specific topics such as housing assistance and time management. The expanded online presence has given you a wider network to draw from to find women for your residential program. You expect to pick up the two-week residential sessions in June. Please tell us more about what's offered in the residential program.

Residential programs are still core to our work in that they allow women an opportunity to leave their current surroundings with all its ongoing demands and focus on themselves for two weeks. It allows the women a longer period to become ingrained in a transforming culture and to practice some of the new tools they are learning. In addition to our core work of self-development including self-esteem, expressive arts, Appalachian culture and literature, holistic health topics, women are given the opportunity to explore professional development aspects as well, including educational options and resources, community engagement, an opportunity to explore various career paths and how to find jobs, as well as develop resumes and practice interviews. Building networks and resources is a major part of this second week. It is far more intensive than our three-day sessions and thus grounds women more in their commitment to transformation.

What happens when somebody is really in trouble because of a domestic violence situation or drug addiction?

One of the things we've realized in the last few years is that our program is not for people in crisis. If somebody calls us in that case, we'll make sure they get into a safe place so they can focus on that crisis first. Many programs only deal with people in crisis, but what do you do for those in transition out of a crisis? So, what we have is a place where they can move out of the initial crisis and start to plan for what's next steps. We're the transitional piece.

Can you share a little about how your position at the New Opportunity School connects to your role as a sister?

Many people don't know I'm a sister and that's somewhat intentional. I don't want to scare them off, but the graduates usually let them in on the secret. Around the world sisters are reaching out. It's usually not by trying to change people's traditions but walking alongside them, by supporting whatever faith tradition they have. It's fun to break stereotypes of what people think sisters are like — right? Many graduates have never met a sister.

Coming to this region after graduating from St. Louis University with an MBA opened so many sources of possible ministry, mostly of the kind not typical of Catholic sisters. I'm a Franciscan. I want to use my gifts to accompany people on their journey — the under-resourced and people on the margins. That's my calling and this program allows me to use my connections to do that. Some of it is more words than action. Even though Appalachian people can be very religious, a lot of people I encounter here don't go to church because they have been turned away. There's all kinds of reasons they feel ostracized and not welcomed. I can bring the spirit of God in a way that is not judgmental. I think I can help nourish them in their faith and help them see when they are in a situation that isn't of God. I would say 95% of the people we serve have a strong sense of faith and they're not Catholic. I don't have a need to make them Catholic. My calling is about bringing that presence of God to them. That changes people. 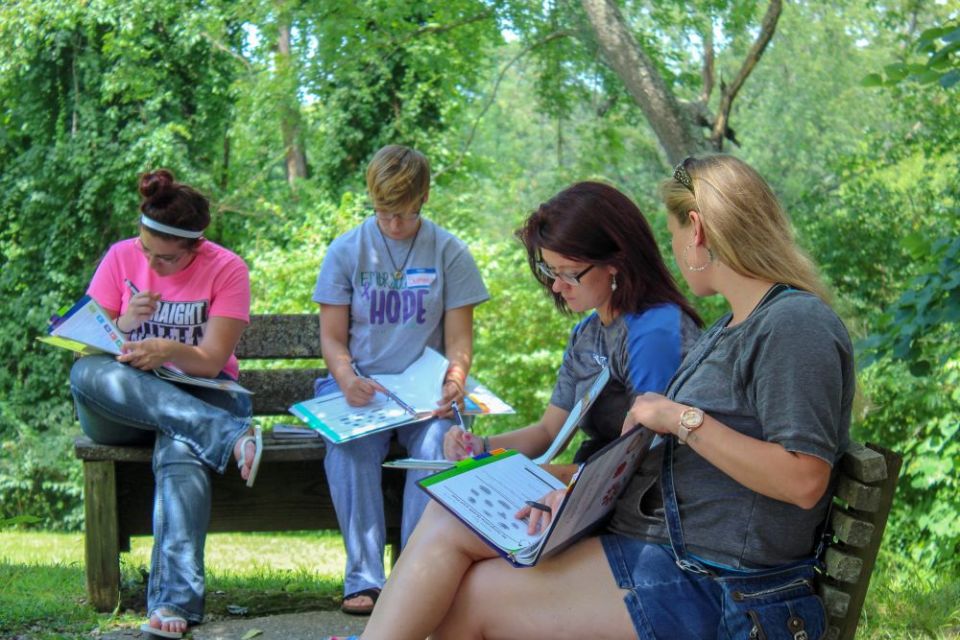 What does a success story look like at the New Opportunity School?

It differs, and it depends on the goal. One of our graduates came through the program in 2003 after a horrible divorce and was almost homeless with her five children. Before she passed away a month ago, she'd gone through college and graduate school and become a licensed clinical psychologist. Four of her children have Ph.D.s. She was a dramatic success story and was highly motivated.

One of our graduates always felt held back because she learned differently and when she would go to school no one could tap into the fact that she learned differently. She thought book learning wasn't for her. When she came here, she realized people were fine with her learning differences. This is someone who said she would never drive. She didn't think she could live alone. She's now driving and delivering pamphlets for us.

Another graduate was an addict for a good part of her life. She finally ended up in a drug court and came into our program in 2016. Her husband was very skeptical and afraid that she would come here and go back to her old ways. Now she's going to school and getting As. Her husband's response is, "I don't know what you all did but you put the fire under her."

Many of the women we encounter have never had anyone ask them what they want to do. They don't realize they have gifts and, believe me, you start seeing those gifts right away. We give them confidence to start trusting themselves and to move forward and make their own goals. 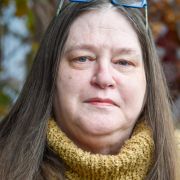 Linda Bryant reported and edited for several dailies and specialty publications from 1991-2018. She covered neighborhoods for The Tennessean in Nashville, Tennessee, and was senior reporter for the Nashville Business Journal. She lives in rural Kentucky where she runs Owsley Fork Writers Sanctuary and works as a freelancer.

Ministry | Q & A with Sr. Robbie Pentecost: reaching out to isolated women in Appalachia

Sister Marguerite, Rwandan sister killed in Yemen, was a surrogate mother for her family