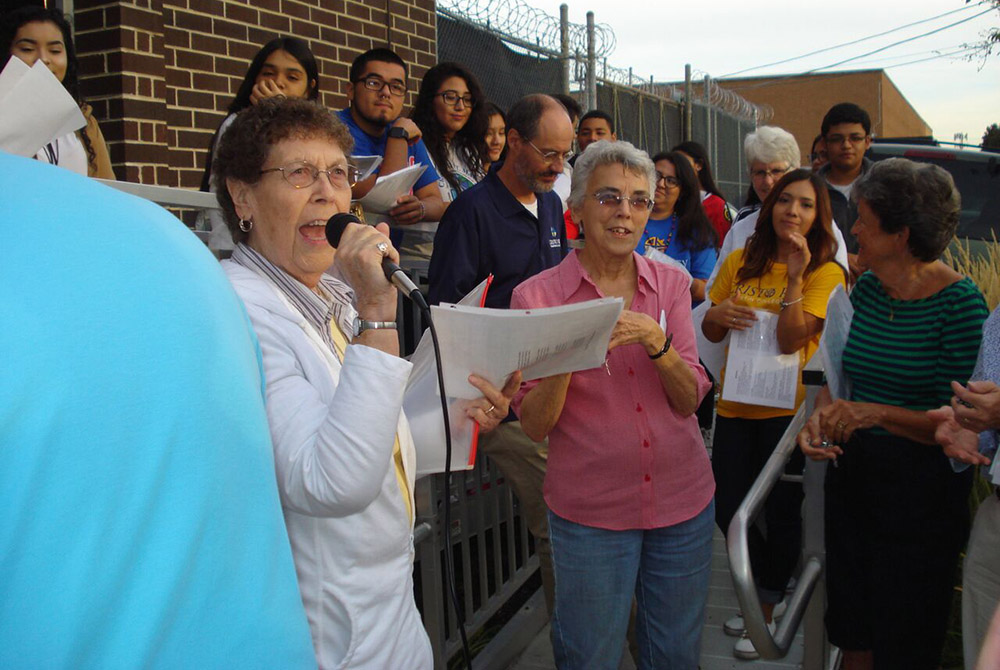 Mercy Sr. JoAnn Persch at a U.S. Immigration and Customs Enforcement staging center in Broadview, Illinois, where immigrants previously were processed and taken into detention (which now happens in Kankakee, Illinois), and where she and others have prayed every Friday morning for more than 13 years. Now the group will pray a rosary on Friday mornings over a group video call to keep up the tradition. (Courtesy of the Sisters of Mercy)

How is the coronavirus affecting your community? Submit an example we may use in future coverage.

Being home all day, every day is a new phenomenon for Sr. JoAnn Persch.

The Sister of Mercy has spent every Friday morning for the past 14 years at a group prayer service outside an immigration detention facility in Chicago. Other days, she'd organize a court watch program, where volunteers for her Interfaith Committee for Detained Immigrants show up to immigrants' court appointments to demonstrate solidarity, or pray with the immigrants getting on a bus to be deported to their home countries.

Sisters like Persch have long been a crucial source of support for migrants and immigrants living in the United States illegally, working as points of refuge throughout the country and offering humanitarian relief, legal aid, or social services.

But a "ministry of presence," as Persch referred to it, isn't possible in a time of social distancing and quarantines, forcing sisters either to reinvent their ministries by strengthening collaborations or pause their ministries and provide donations wherever possible.

"We are aware that we're no longer in the times where if sisters don't go out, nobody else will do it," said Sr. Adriana Calzada Vazquez, a Sister of Charity of the Incarnate Word. Recalling the health care work of sisters during the 1918 Spanish flu is "beautiful, but that's not how we do it now," she said.

"So, what is truly our call these days? I don't think we've found out. The response is to stay home for the good for society, and that's not satisfying."

On April 21, President Donald Trump announced he will suspend immigration into the United States for 60 days, though still allowing temporary workers with nonimmigrant visas to enter the country.

Now that crossing the U.S.-Mexico border is no longer an option, Sr. Denise LaRock, a Daughter of Charity of St. Vincent de Paul, said her ministry in San Antonio, Texas, has slowed to a near-halt.

Part of the Interfaith Welcome Coalition, LaRock and other volunteers stopped crossing into Nuevo Laredo, Mexico, midway through March out of fear that they would bring the virus with them. 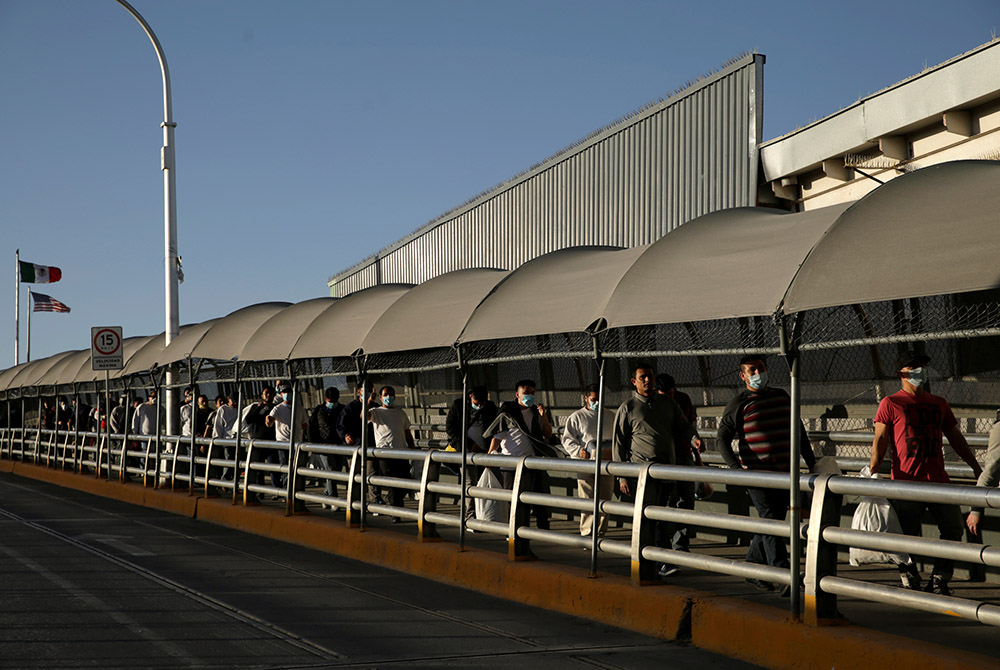 So instead of grocery shopping with migrants on the other side, they now reimburse them for what they buy. They're also stocking up on essentials, like empty backpacks and nonperishable food, to donate, filling two storage units in Laredo, Texas, while providing funds to places in Mexico that offer social and relief services.

But LaRock said she is worried about those in the United States who don't qualify for federal help. It's not just those living in the country illegally: Those who are in the United States legally but who don't have official status, like green cards or visas, still don't receive government assistance. LaRock and the coalition are working on helping local food banks feeding those out of work.

Even though immigration proceedings are on pause, LaRock said she's worried about those who are still being "forced into dangerous paths" because of requirements to reschedule their court appointments in person at the border.

"Everyone is saying, 'Stay put and stay safe,' but we're forcing them to go to the [Laredo] bridge to reschedule," she said. "Some are in shelters. A lot are traveling through cartel areas. ... They're risking going through that danger again and also catching the virus because they have no options."

To help them avoid the travel, LaRock and volunteers are trying to contact the Mexican consulate to see if they can do this process online.

Still, one of her main concerns is that "the deportation machine has not slowed down at all," with people, including minors, still coming to the border seeking asylum.

"They're in custody for an hour and a half and then are put back on the other side of the border. ... What's going to happen to their long-term cases? Is that 'official deportation' just because our systems are closed and that cuts off their chances of ever getting asylum? What are the long-term implications?" 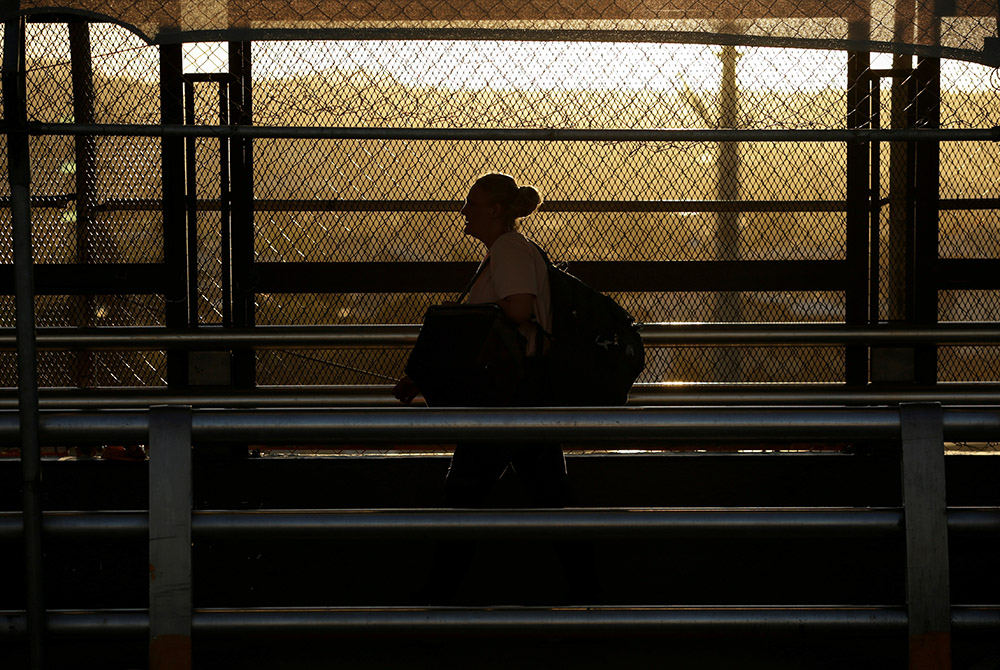 Vazquez said her congregation, which is based in San Antonio and has a presence in Mexico and Peru, spent the past year evaluating different ways they can maximize their "geographic privilege" of having sisters on both sides of the border. In July, they established partnerships with different institutions and ministries "so that our efforts can be combined and put to work in a more efficient way."

The Sisters of Charity of the Incarnate Word see their role as identifying opportunities for collaboration or projects that need funding. They've been calling on friends, schools and collaborators to get involved in relief efforts.

"We are way past the time where the sisters are supposed to be doing everything," Vazquez said.

"We identify ourselves as a congregation that can become a channel for people who want to help with this migration crisis."
—Sr. Adriana Calzada Vazquez

One city that caught her congregation's attention is Matamoros, Mexico. Migrants who planned to travel through the city to the border are now unable to cross into the United States, overwhelming shelters that that are unequipped for long-term stays.

The sisters and their partners sent financial donations for food to those in the crowded shelters or refugee camps. While the city has running water, she said it's still not enough for every person to be able to wash their hands, prompting the coalition to donate antibacterial materials. And Vazquez has heard of tentative plans for constructing an emergency hospital in Matamoros and said they'd be interested in finding ways to help fund that project if it happens.

"Since people know we're on both sides of the border, a lot of people have been reaching out to us, asking how we can help, and that's part of the reason we started with this coalition," Vazquez said. "We identify ourselves as a congregation that can become a channel for people who want to help with this migration crisis."

In south-central Mexico, Sr. Dolores Palencia said she is seeing more danger for the migrants who pass her city of Tierra Blanca, Veracruz.

Discouraged from free-riding the freight train that runs north, she said, migrants instead make their journey entirely on foot.

"It's very hot, they hurt their feet, they're exhausted, and gangs and organized crime can assault them as they keep going forward," said the Sister of St. Joseph of Lyon. Even once they reach the border, they will be rejected from passing through, leaving them stranded in a border town that's quickly overcrowding.

With her fellow sisters, Palencia runs a migrant shelter known as Albergue Decanal Guadalupano. As of mid-April, they closed their accommodations but had not closed the shelter entirely. They still offer food outside the shelter three times a day, allowing migrants to use their indoor bathrooms once a day. 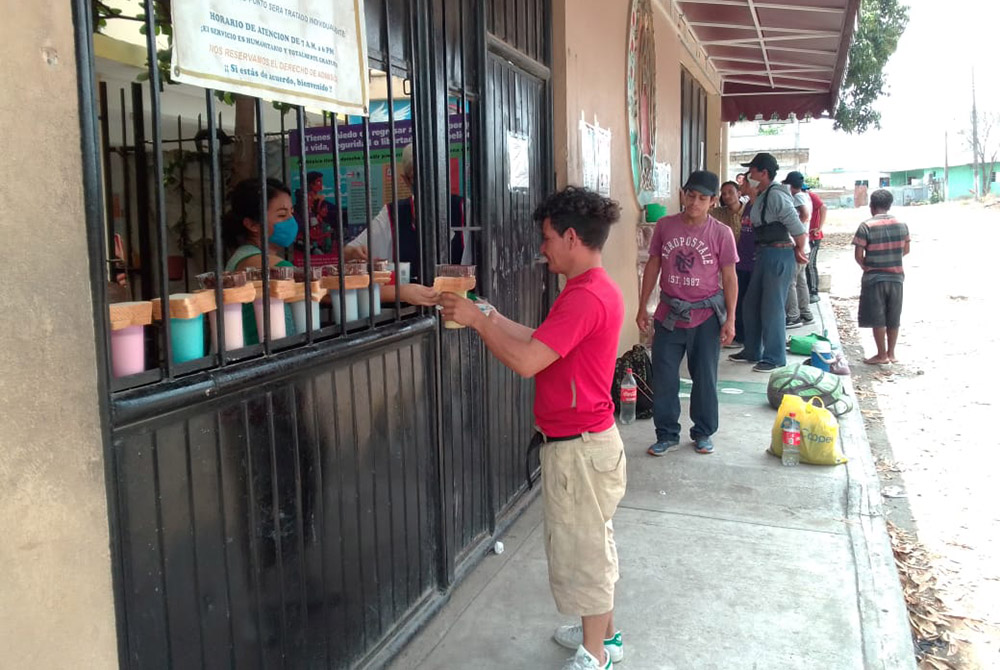 Rather than shutting down the shelter entirely, the Albergue Decanal Guadalupano has ended overnight stays while still providing meals three times a day and allowing limited bathroom use. (Courtesy of Sr. Dolores Palencia)

"Not all migrants have a clear conscience of what they'd be experiencing [on the road during a pandemic], and in some cases, they had already left their home countries," unaware that the virus could have totally transformed their destination, she said.

"Some are looking for work, but jobs are closing everywhere. What can they find? Where could they even quarantine when that becomes necessary?"

Sr. María Engracia Robles, a Missionary Sister of the Eucharist, has been ministering in Nogales, Mexico, since 2007. Two years later, she and her fellow sisters integrated with Jesuits to form what is known now as the Kino Border Initiative. The binational group provides education, legal advocacy and humanitarian relief, such as their shelter, for the stream of individuals being deported from the United States.

Since the coronavirus began to spread, some of those ministries have become hard to carry out without hosting gatherings, Robles said. Now, they're focusing on food donations wherever possible.

Robles said the migrants who manage to reach the Mexico-Arizona border arrive with virtually no good options.

"The only thing we can do for them is give them food because now, there's no shelter. Now, through their own accord and risk, they have to find a place to stay," she said.

While they still try to offer "orientation" over the phone by helping migrants find resources or figure out their next step, the help feels limited when it's not in person, Robles said. Most who reach Nogales feel like they're at a dead end, while other families can't count on money that their relatives were sending from the United States, as they have lost jobs and are unqualified for federal help, she added.

"For us, the sisters, our work has been greatly diminished," Robles said.

From the United States, Vazquez said she's concerned the migrant population and those living in the country illegally are being overlooked in this crisis.

"Some people in the U.S. are talking about them, but it's the people who always talk about them. ... And [migrants and immigrants living in the country illegally] tend to hide for obvious reasons. They're not going to ask for help because they're still hiding. That's a concern, for sure."

Amid the worry and ministry paralysis, Persch said she tries to discern what God is communicating to the world.

"It kind of tickles us that in the news, it's like, who's important right now? It's not Congress, it's not CEOs, it's not stockbrokers," she said, choking back tears. "It's people who care for other people. And to me, that is such a strong message from God."