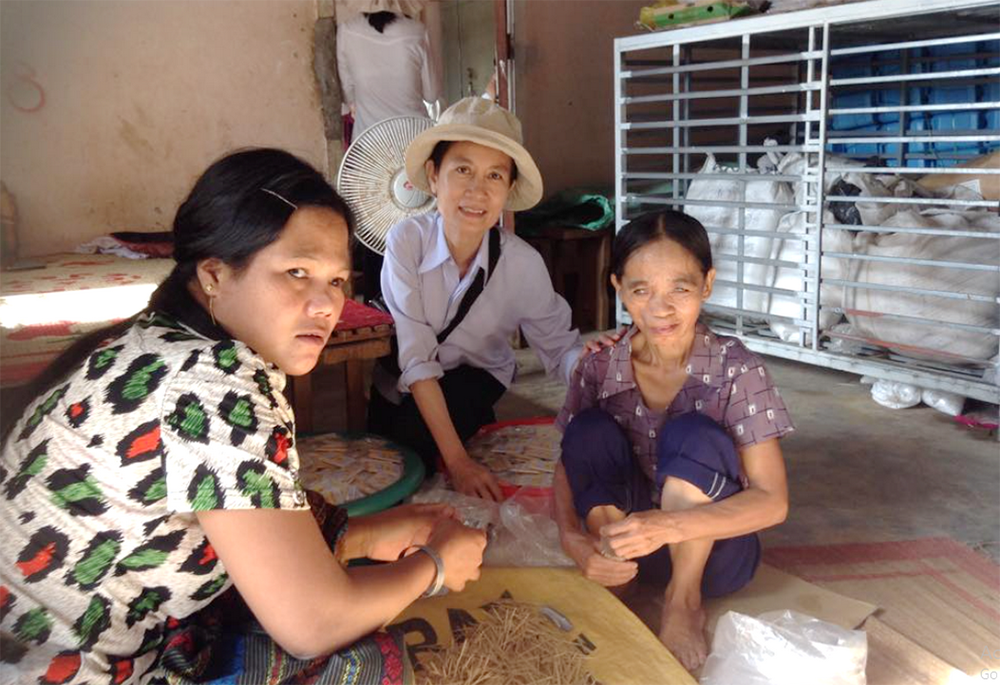 When Sr. Agnes Hoang Minh Trang was in charge of a mixed choir at a parish in Thua Thien Hue province in Vietnam in 2005, a choir member fell head over heels in love with her and texted her sweet nothings.

Trang, who was then a novice from the Daughters of Our Lady of the Visitation and living at Phu Luong Community in Phu Vang district, said the man, who sang beautifully and was handsome, tried to steal her heart.

"I looked to a greater love for Jesus and prayed fervently to resist the temptation to abandon my religious vocation, although I felt sad," she said, adding that she also deleted the man’s texts and threw away her SIM card to avoid temptation. She said she also prayed for him to have a happy life.

"I plucked up courage to tell my story to the community head, and some weeks later I was sent to another community in another province," said Trang, who wanted to be a nun or nurse since she was a child.

The 38-year-old nun, who took her final vows in 2013, said, "I am really delighted with my proper vocation to bring joy to people in need, and I wish many youths to willingly answer God’s call to serve the church."

The sister, who works at Quang Cong Community with six members in Quang Dien district, teaches catechism every day to children and catechumens, administers Eucharist to patients and elderly people, and works with people with visual impairments.

She said, "Religious vocations are from God, who always calls us to follow him. For our part, do we attentively listen to his call and dare to welcome it?" 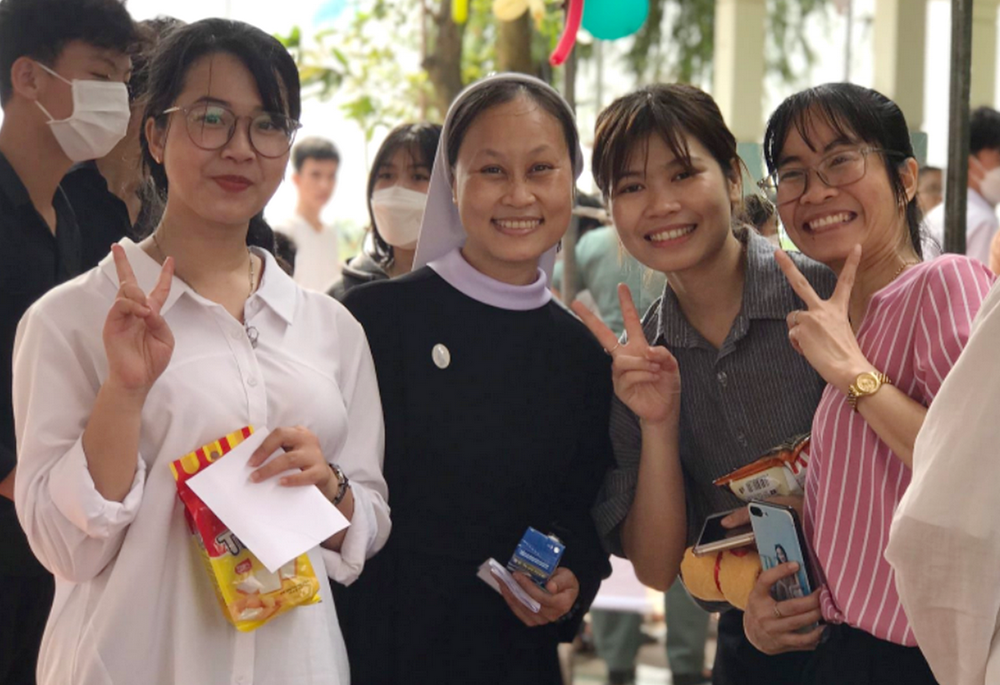 Young women who are interested in the Daughters of Our Lady of the Visitation and Sr. Anna Bui Kieu Trinh pose for a photo May 14 in Hue. (Joachim Pham)

Trang told her compelling story to some 40 female students interested in religious vocations at a gathering held on May 8 at Phuong Duc Church in Vietnam's ancient capital of Hue. The event celebrated Good Shepherd Sunday.

Anne Dinh Thi Dieu Chung, who is interested in joining the Daughters of Our Lady of the Visitation, said she admires Trang, who bravely gave up romantic love and pursues consecrated love for Jesus to bring good things to other people.

The 19-year-old student said she had ignored the advice of her Buddhist boyfriend, a taxi driver, who urged her not to pursue college but to enter into marriage with him. She said she made the decision so that she could study further and learn more about her religious vocation.

Three women's congregations based in the city organized special activities during the week in May to promote religious vocations among young women.

Some 750 students of ages 13 to 23 went to the gatherings. They watched cultural performances, played games, listened to the congregations' histories and activities, discussed ways to live a good life, attended Masses and eucharistic adoration, and shared meals. The students are from the Hue Archdiocese and the dioceses of Da Nang and Ha Tinh, where sisters work. 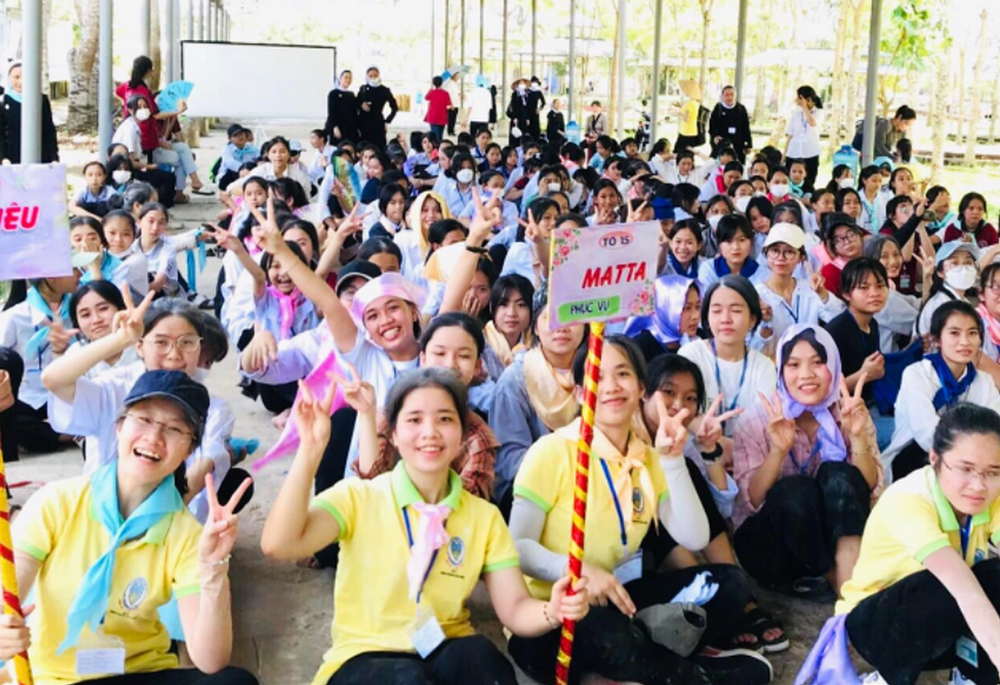 Young women who are interested in religious vocations attend a gathering held by the Daughters of Our Lady of the Visitation in the national Shrine of Our Lady of La Vang on May 15. (Joachim Pham)

Fr. Dominic Phan Phuoc, pastor of Tay Linh Parish with 1,000 members, said that young women who cannot go to college are urged to learn vocational skills and settle down. They often get married at ages 20-23.

Phuoc, 73, said others are given opportunities to finish college and pursue their careers before settling down and starting a family. Going into religious life is one of the few options young people have outside of marrying. Young men have the same options.

He said local children are encouraged to join associations in the parish and visit convents and monasteries so that they can develop interests in religious vocations.

The young women attending the May events asked the nuns why they followed religious vocations, if they had boyfriends before entering religious life, and how they overcame challenges and temptations to be faithful to their vocations.

Some sisters related their stories briefly at gatherings and later gave more details to GSR.

Teresa Dinh Hoang Bao Tram, a novice from the Lovers of the Holy Cross of Hue, said when she was a child she admired the turquoise habits of the nuns who taught catechism, played the piano, and sang hymns at her home parish of Ha Uc in Phu Vang district.

Tram said she attended daily Masses and met the nuns. She had to ride a bike alone in the evening through a cemetery to the church.

"I feared ghosts on rainy, windy, cold days in the winter, and I tried to allay my fear by wearing a cross on my chest and saying prayers," the woman, who has two siblings, said.

"I prayed hard to God to help me to pursue a religious vocation for years, and I joined the congregation after I finished high school four years ago," Tram said.

She is among the congregation's 25 novices who are expected to make first vows in November 2022. 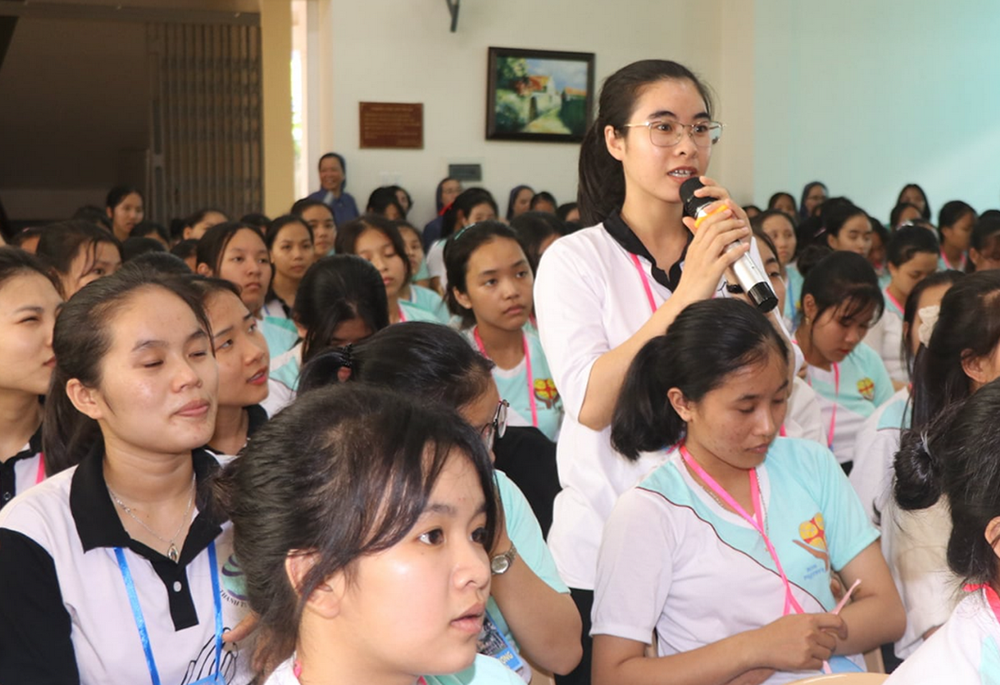 Elizabeth Le Thi To Hong talks to sisters at a gathering for young woman interested in vocations at the Lovers of the Holy Cross of Hue's motherhouse May 8. (Joachim Pham)

The 22-year-old novice, who works at the motherhouse and joins local Catholic volunteers in offering food to street workers over the weekend, said she enjoys her consecrated life to the fullest and takes a full-time course in social work from the University of Science in Hue so that she can serve vulnerable people, especially women and children, better in the future.

She said many sisters from the 303-year-old congregation offer emotional and material support to single mothers and women who are abandoned by their boyfriends after they get pregnant.

Tram offered her handy tips on pursuing religious vocations to 180 young women at a gathering with the theme "Making Friends with Jesus," held at the congregation's motherhouse.

Sr. Mary Nguyen Thi Phuoc Hong, a member of the Filles de Marie Immaculée (Daughters of Mary of the Immaculate Conception), said she used to act the role of Mother Mary at Christmas and Easter.

"The role touched my heart and I tried to become as gentle as Mother Mary. That is the way my vocation developed," she said.

The 42-year-old nun, whose family is from Phan Thiet Diocese, said her friends, including those from other faiths, appreciated her performance and characters. "Once I played a soccer game for women in the parish. My friends cheered loudly for me. They said 'Mary plays soccer, go on!' " she recalled.

She prayed and came to the aid of her friends of other religions. "I visited and helped a classmate who suffered tuberculosis for months until she recovered. She became one of my close friends and she embraced Catholicism before she married her Catholic husband," she said.

After she joined the congregation in 1998, Hong, who completed a course in health care management and graduated in English, took her solemn vows 10 years later and was assigned to the Kim Long Charity Clinic in Hue.

The nun, who spends her free time and holidays visiting people with HIV/AIDS and who works with Catholic volunteers to talk about HIV preventions at parishes, said, "I often finish my work at 10 p.m. and feel so tired that I miss or drowse fitfully during Masses in the following early mornings," she said. The nuns get up at 4 a.m. 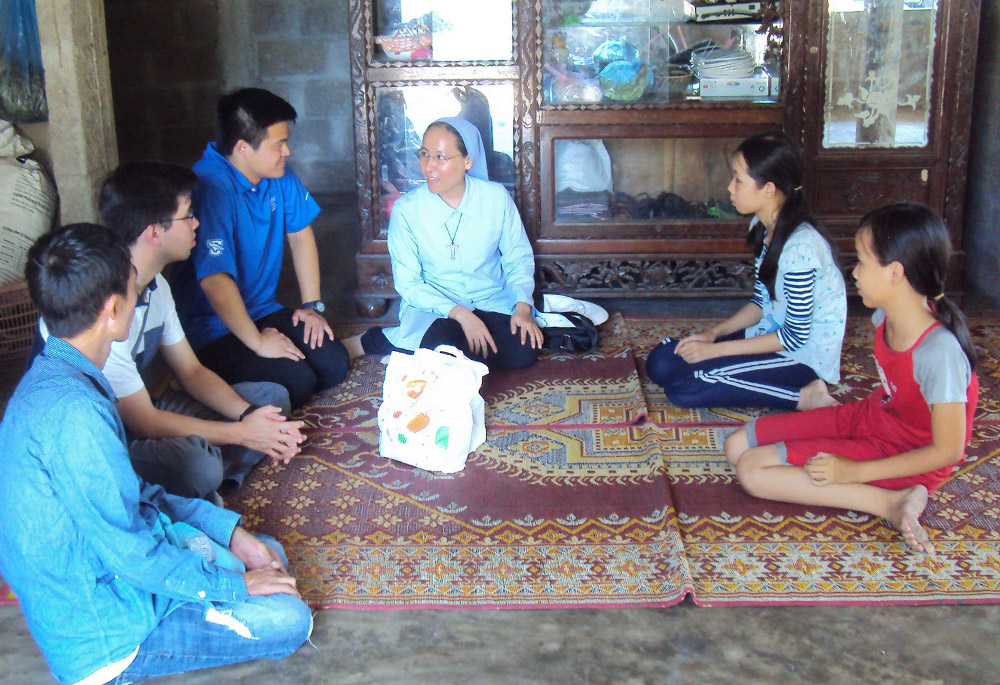 "I am perfectly happy with my vocation that is to glorify God and take care of patients," Hong said, adding that many of her married friends get divorced or suffer domestic violence.

She urged 150 young women at a gathering called "Set off to find Jesus" held on May 10 at the national Shrine of Our Lady of La Vang in Quang Tri province, to bravely follow God, who, she says, always loves and keeps them in peace and ecstasy under any circumstances.

Elizabeth Le Thi To Hong, 19, said she wants to be a nun because her extended family has had no religious or priests since her great-grandparents converted to Catholicism.

Hong, who just completed high school, said she registered to join the Lovers of the Holy Cross of Hue on May 8 when she attended a gathering at the congregation’s headquarters.

The woman from Ha Uc Parish said she admires Sr. Lucia Phung Huong Oanh, an ethnic Chinese woman who converted from Buddhism to Catholicism and left the University of Medicine and Pharmacy in Ho Chi Minh City and joined the congregation in 2006.

Oanh works at a religious community based in the national Shrine of Our Lady of La Vang.

"I daily attend Masses and Eucharist adoration, recite the rosaries, and seek advice from sisters as a way to nourish my religious vocation," Hong said.

Sr. Marie Béatrice Nguyen Thi Thuong, who works at the Filles de Marie Immaculée congregation's motherhouse, said when she was 18 years old her parents pressured her to marry a wealthy man who was 10 years older than her.

Thuong, who admired nuns when she was a child, said she met the man and told him that she wanted to be a nun and asked him to find another woman to marry. She left her home and stayed at her uncle's home in another province.

She said her parish priest sent her to the congregation and advised her parents, who were bitterly angry with her, to respect their daughter's choice. It took them one year to calm down and forgive her.

"I decided to pursue my religious vocation and spend my life bringing God's love to other people. I chose God as the love of my life," the 50-year-old nun said.