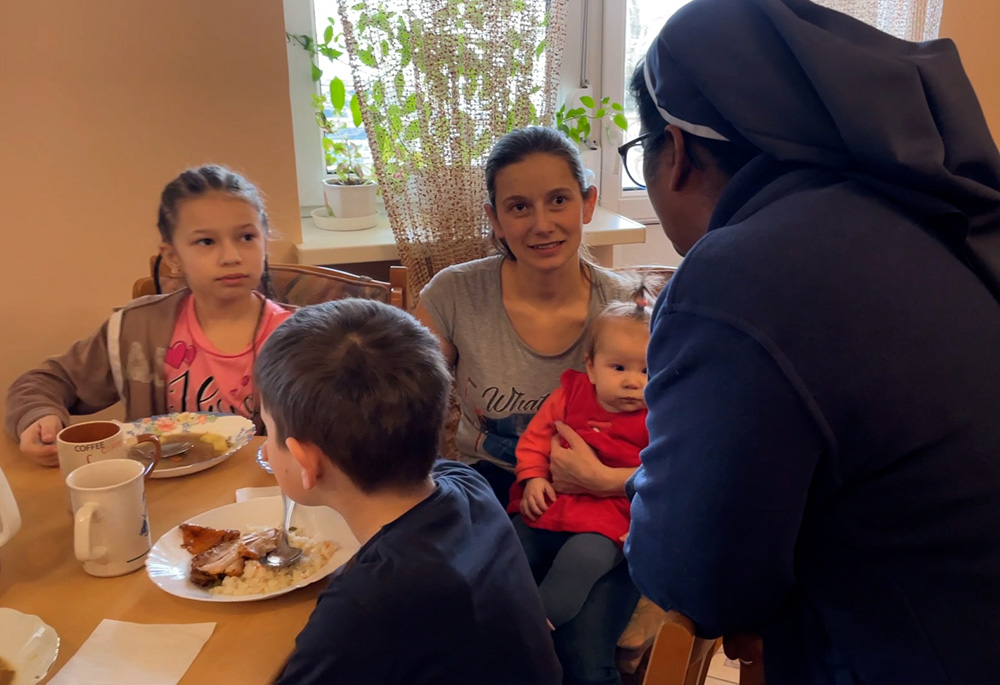 Little Michael was born Feb. 23, a day before Russian invaded Ukraine. After spending five days in a bunker, he felt safe in the arms of a Catholic nun.

Sr. Ligi Payyappilly, an Indian nun who has been sheltering refugees in her convent in Mukachevo in western Ukraine, says rescuing the baby was the most touching experience in her mission among people fleeing the war.

"With the help of our prayer group members, the family was rescued from war-hit areas and brought to our convent five days ago," the 48-year-old member of the Sisters of St. Joseph of Saint-Marc told Global Sisters Report on March 10 in a phone interview, the second one with GSR since the war began. 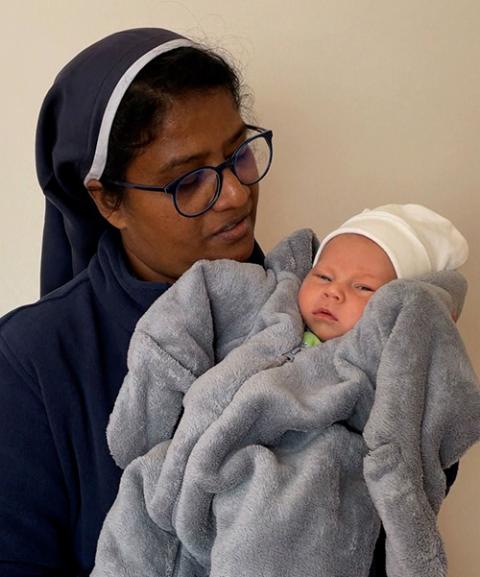 The nun hailed the infant's mother, Julia Valatinivna, who held the baby close to her chest all five days in the bunker in Kyiv and during the long journey to Mukachevo. The mother had fled from the hospital and took shelter in the bunker a few hours after she delivered Michael.

Payyappilly said the infant and her mother reminded her of Joseph and Mary fleeing Bethlehem to Egypt with the infant Jesus immediately after his birth.

The mother and child are among some 80 Ukraine women and children sheltered in Payyappilly's convent along with 50 elderly people who are cared for as the congregation's usual primary mission.

"We have almost completed our evacuation mission of scattered and lost Indian students, and want to concentrate on Ukrainian mothers and children now," Payyappilly explained. The convent has 17 other nuns, mostly Ukrainians who assist Payyappilly.

"Where can they go?" she said of those displaced by the war, who have become refugees in their own country and neighboring nations. "These people have nowhere to go."

Valatinivna's husband, Zhavrida Alex, who accompanied her to the convent in Mukachevo, had to return immediately to Kyiv as the Ukrainian government wanted all men to fight for their country.

Holding Michael in her arms, Payyappilly said the baby is one of the few children of this age who escaped the war and found a safe place. She said more than 40 children have been killed in Ukraine since the war broke out. The United Nations confirmed 29 child casualties.

Ukraine President Volodymyr Zelenskyy accused Russia of genocide by bombing a children's hospital March 9, burying patients in rubble despite a cease-fire deal for people to flee Mariupol city, some 885 miles southeast of Mukachevo.

The Indian nun's service to people stranded in Ukraine earned her the "Woman of Courage" award on March 8 from Distress Management Collective, a Delhi-based organization. The award comprised a citation and a cash prize of $200.

Deepa Joseph, a Supreme Court of India lawyer and chairperson of the collective, said Payyappilly was unanimously selected for the honor. "This was not only for her commitment and dedication in serving the distressed, but also for her courage to work in a war region to rescue the people," Joseph told GSR.

The collective is an international network of volunteers from various religious backgrounds spread over 100 countries, with more than a dozen offices in major cities, Joseph said. 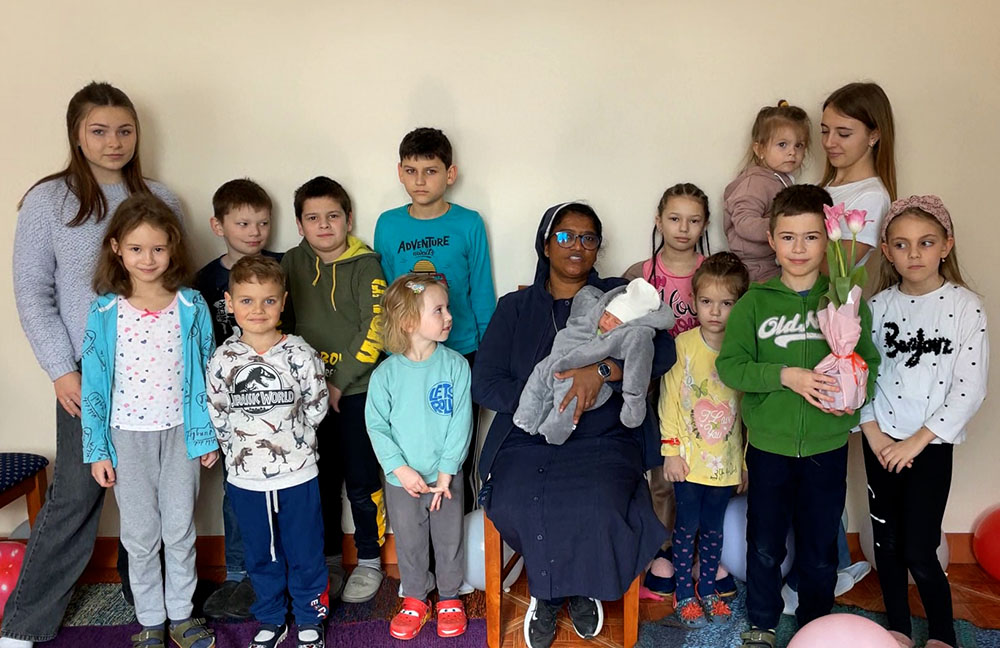 The lawyer said her organization plans to collect money from its network to help Payyappilly to continue her mission.

Payyappilly said she does not work for honors, but she will accept the award "as a token of appreciation from the world, so that more people get involved with my mission."

She said their funds and resources are drying up and require support from well-wishers to accommodate more fugitives. "The Ukraine citizens have helped us until now, and I don't think they can continue to help us from war zones," she explained.

A German humanitarian agency has sent the food and clothing materials mainly to support the old age home, and they managed so far with those resources. 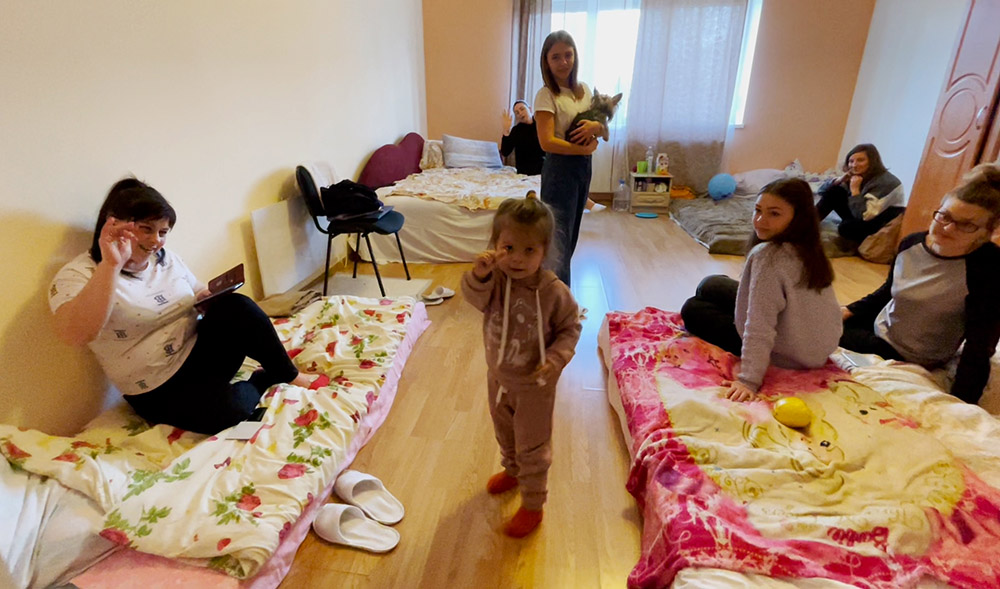 One of the dormitories where mothers and children are accommodated at the Sisters of St. Joseph of Saint-Marc convent in Mukachevo in western Ukraine. Some have brought their pets, too. (Courtesy of Ligi Payyappilly)

Payyappilly says her main worry is the heating charges for the dormitories that cost around 3,000 euros a month.

The temperature in Ukraine is minus 7 degree Celsius at night and the refugees are mostly women and children who require heaters, she said.

The nun says they are accommodating refugees in their building meant for conducting retreats. "But we need the running cost," she added.

Payyappilly said she made a video holding Michael to ask people to pray for Ukraine and support for her humanitarian mission. "The little Michael gives me more hope and confidence," she added.

In a video, Sr. Ligi Payyappilly, superior of the Sisters of St. Joseph of Saint-Marc convent in Mukachevo in western Ukraine, requests prayers for Ukraine. (Courtesy of Ligi Payyappilly)

She is also worried about other children and their mothers who fate she does not know. "Hundreds of people have lost their homes, jobs and money, but we must serve at least those who come to us," she added.

An estimated 2 million people have fled Ukraine for neighboring countries, according to various agencies. The U.N. estimated that a total of 1,735,068 civilians, mostly women and children, had crossed the border into Central Europe by March 5.

Meanwhile, the last Indian student reached Payyappilly's convent March 10. She said the native of the southwestern Indian state of Kerala was "really panicked as he had narrowly escaped from shells and missiles."

She said she had to make several calls to coordinate his rescue with the help of her friends in Ukraine.

He was among those students who traveled on their own to the border but lost the way because of the heavy shelling and bombing. Ignorance of the local language added to his woes.

"Ultimately, our Ukraine people saved him and brought to the convent," Payyappilly added.

The nun had also rescued two girls in similar situation who were separated from their group on the way because of explosions. "They had also finished all their money and were in panic when I called them," she said.

Here are some ways you can help those in Ukraine:

A Franciscan priest from Poland who works in Ukraine helped them cross the Polish border. "The priest had also given them some money at my request," the nun said.

Payyappilly says the Ukrainians, who have been part of their prayer groups, helped the students reach her. "It is time that we give it back to them," she said.

In a video message in Malayalam, she urged the students helped by her to pray for the Ukrainians who are still in the war-torn nation.

Vignesh Suresh, a Hindu student helped by the nuns, told GSR from his home in Kerala that he was worried about Payyappilly and her sisters. "I have asked her to come back to India, but she is adamant that she would not go anywhere leaving her people in Ukraine," he said.

Suresh's mother told GSR that they got their son back mainly through the sisters and they are ever grateful to them.

Alexin Shibu, another student of the Kharkiv University who reached his home in Kerala March 5, said his most touching experience in Ukraine was "my last night spent in a convent. It was there I had my first proper sleep after the war broke out."

Shibu told GSR that he and other students would respond to Payyappilly's call for prayer, and "we want to also pool our resources together and send her a gift."