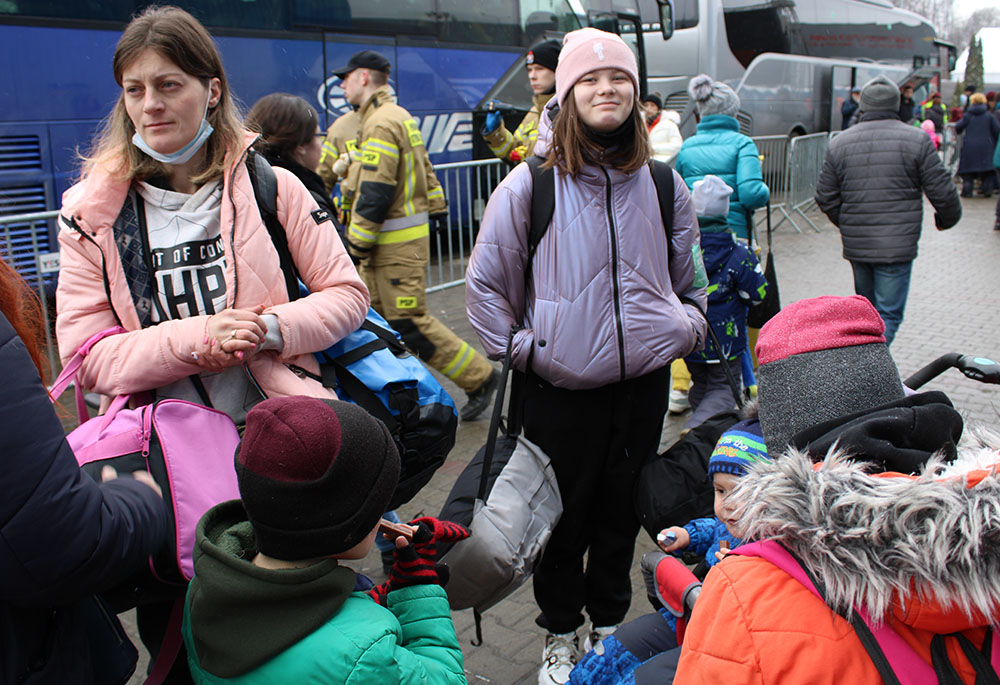 Ukrainians having arrived at a transit center in the border city of border city of Korczowa, Poland, wait for buses that will take them elsewhere to Poland or other countries in Europe. (GSR photo/Chris Herlinger)

Sr. Evphrosynia Senyk admitted to still being tired and a bit weary after a long and difficult journey earlier in the week from western Ukraine.

But in the quiet space of a small chapel at a Ukrainian Catholic Church in Krakow, her expression changed from somber to a beaming smile when asked about the welcome she and other Ukrainians have received in neighboring Poland.

"We were moved to tears, to be welcomed by the Poles," she said. "How they welcomed us, with such warm and open hearts."

"Here in Poland, it feels like they are our brothers and sisters," said Senyk, a member of the Congregation of the St. Joseph's Sisters of the Ukrainian Catholic Church.

With the war that began Feb. 24 with the Russian invasion of Ukraine having entered its third week, the welcome for Ukrainians has been not only warm and fraternal, but concrete. 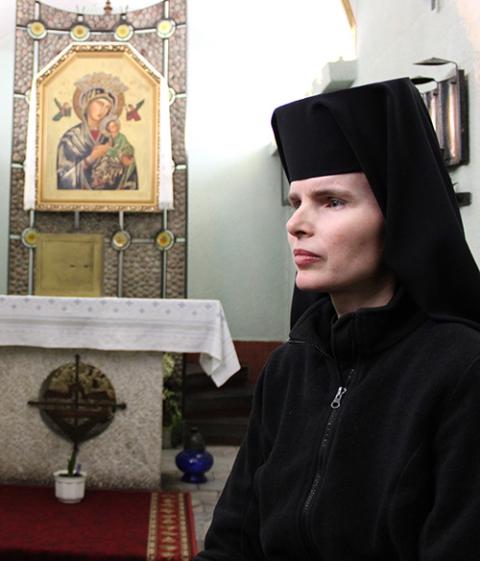 A combined bus and train journey for Senyk that began on Thursday, March 3, from the border city of Lviv, where her congregation has a convent, ended Sunday, March 6, in Krakow, where she has been assigned to work at the church and a congregational residence.

For part of the journey, Senyk was accompanied by her sister, two other women and three small children, who were bound for other locales. Senyk was responsible for getting the women and children to their destinations safely — and while traveling, looking after the group: "Holding one child in my arms or on my knees, looking after bags, tickets and travel documents," she recalled.

Travel was made easier when Polish authorities allowed the Ukrainians to travel free on the train from the border to Krakow.

That was a small thing, Senyk said, but a relief after a challenging journey — an experience shared by more than 1.2 million Ukrainians who have entered Poland in the last two and a half weeks, out of a total of 2.4 million who have fled war-torn Ukraine.

At the border areas, the largest refugee crisis in Europe since World War II is being handled largely by volunteers who are providing warm meals and specialized services, like helping those traveling with their pets.

While refugee transit sites in the border cities of Korczowa and Przemysl seem to be run in an orderly fashion, the sites are also overwhelmed by donations of used clothing — much of it seeming to be better suited for the summer than in a late winter that has been cold, windy and even snowy.

The transit centers — set up in cavernous, shuttered shopping complexes converted for this use — are crowded, with each housing hundreds of arrivals. But they are organized, with cots set up in an orderly fashion. Volunteers serve the arrivals hot meals from food trucks outside the complex. 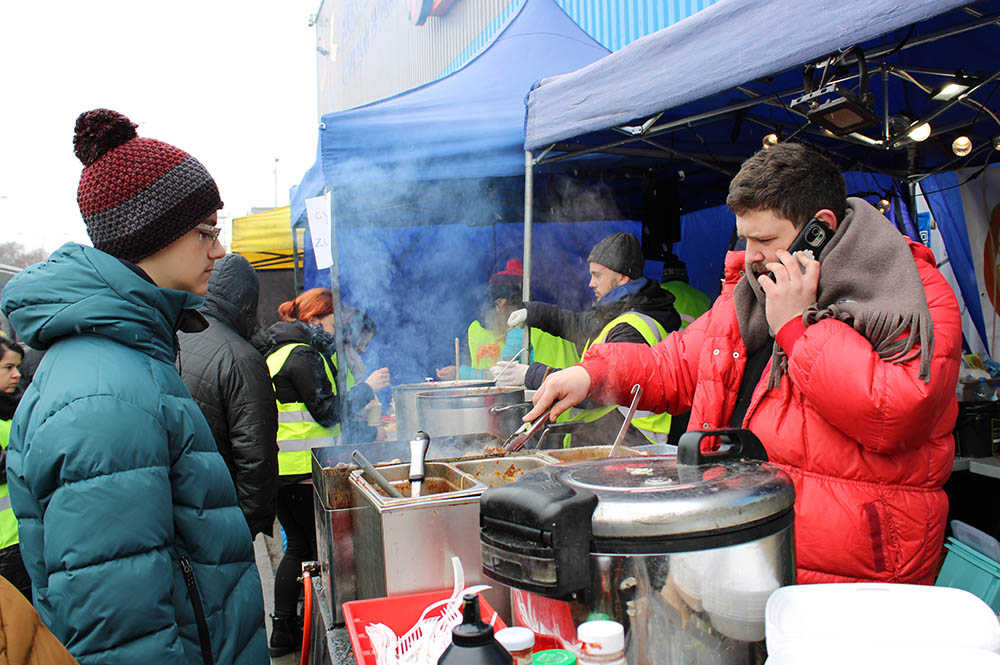 A volunteer prepares food for Ukrainian refugees at a stall outside a refugee transit site in Korczowa, Poland. (GSR photo/Chris Herlinger)

The Ukrainians — predominantly women, children and the elderly, as most men in their 20s to their early 60s are staying in Ukraine to fight in the war — sleep on cots. Some nap during the day, covered with blankets. Others text families and friends back in Ukraine or in their hoped-for destinations in Poland or elsewhere in Europe.

At the refugee transit site in Korczowa, Ukrainians who had fled heavily bombed Kharkiv, Ukraine's second-largest city, rested, took stock and contemplated their next moves.

They uniformly said they were impressed with Polish hospitality.

As they finished their breakfast, two Kharkiv residents, Inga, 51, and her daughter, Maryna, 30, said the situation in their city was dire, and that they had no choice but to leave. It took them three days to arrive in Korczowa, mostly by train.

"Fear, fear," said Inga, an information technology worker who, like a number of those at the center, did not want to give out her full name. "It was a terrible situation."

While the two were not sure where they might go next, and were worried about family who remained in Kharkiv, including Inga's husband and Maryna's father, they said they appreciated the welcome in Poland and felt safe for now. "Here it is certainly safe after Ukraine," said Inga.

"It is certainly welcoming that the people of Poland are taking care of us," said Maryna, a biologist. "It's very great. We just hope it's not for so long," she said. "We just can't be sure how long we will be here."

Down the way, another group of Kharkiv residents sat on cots and began eating Knoppers, a Polish brand of nutbars being distributed by volunteers.

The two women had just arrived the day before in Korczowa from Kharkiv and said they had no other choice but to leave. "We were scared, and especially scared for the child's sake," said Anastasia, cradling her 1-year-old son, Nikita. 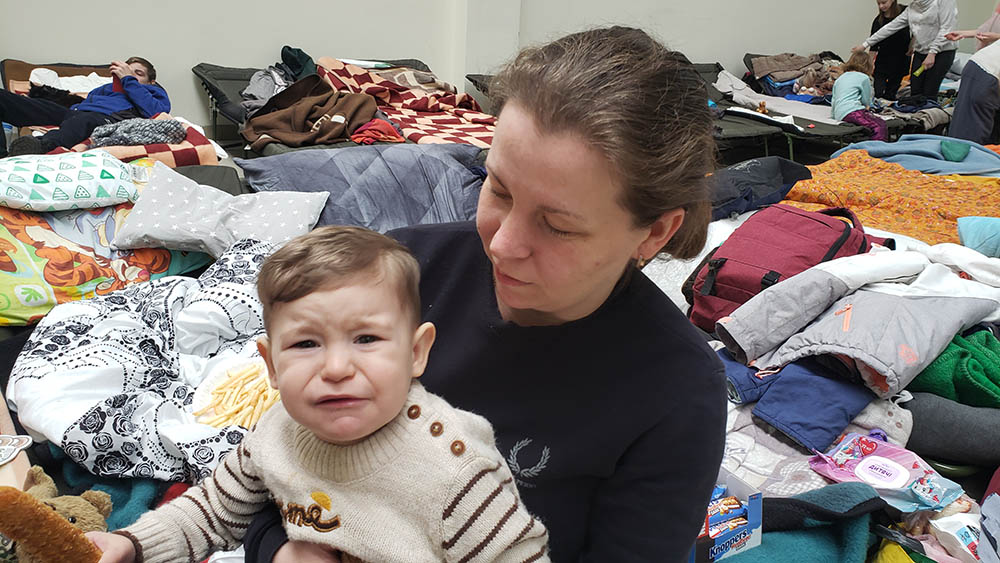 Two families who had just arrived March 8 in Korczowa, Poland, from Kharkiv, Ukraine, said they had no other choice but to leave. "We were scared, and especially scared for the child's sake," said Anastasia, seen here holding her a 1-year-old son, Nikita. (GSR photo/Chris Herlinger)

Both Anastasia and another Kharkiv woman, Olga, said they were headed to the Polish capital of Warsaw where both women have families. Anastasia said it would be a relief to reach her destination and be reunited with her husband, Sergey, who works in Warsaw.

For now, though, the women could take some respite and know that they were safe. "Everything is all right," Anastasia said.

While the welcome has been warm and accommodating, those who fled Ukraine have many challenges to face, including decisions of whether to stay in Poland, or travel to another country.

A spokesman for UNHCR, the United Nations refugee agency, said that Ukrainians can legally stay in Poland to live and work for up to 18 months without seeking official refugee status. Those who seek international protection can formally apply for refugee status later.

Legal status is one issue; more pressing is simply deciding what to do in an uncertain situation. 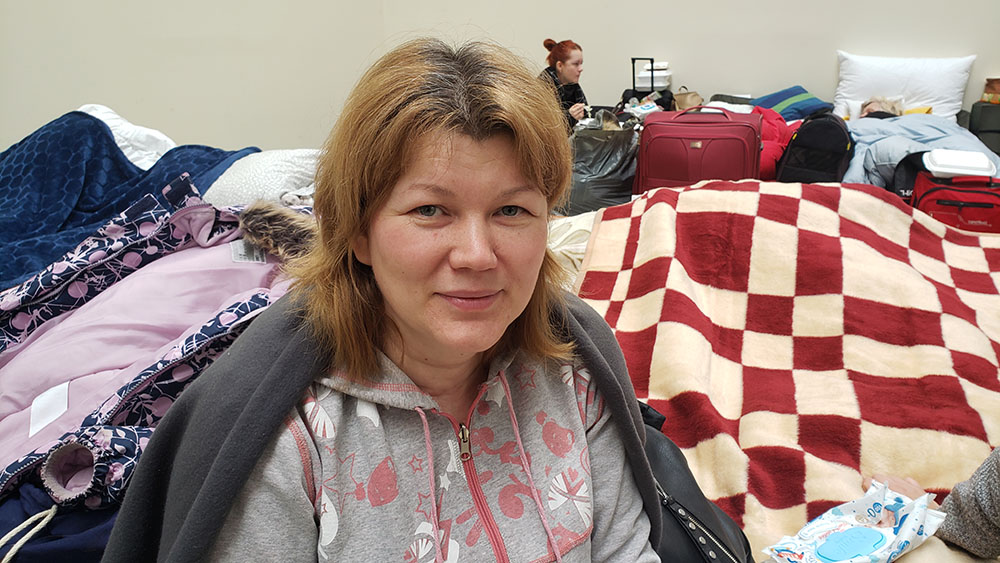 Olga, a refugee from Kharkiv, Ukraine, was headed to the Polish capital of Warsaw to be reunited with family living there. "We feel welcomed, certainly, yes," said Olga, praising the Polish welcome to the Ukrainian arrivals. (GSR photo/Chris Herlinger)

Irin Sautina, another resident who fled Kharkiv, had to take her disabled husband, Alexi, to the hospital in Korczowa the day they arrived. While worried about her husband, Sautina is spending her days at the transit center, watching over the couple's three cats, Angel, Bonay and Cugank, and two medium-sized dogs, Lira and Laylay.

While Sautina is relieved that their three-day journey by car and then bus got them out of harm's way — "It was very dangerous, with streets destroyed," she said — what happens next to the couple and their pets is far from certain, she said.

Still, at the transit center, Sautina has everything needed for now, including hot meals and pet supplies provided by volunteers.

"It's normal — or as normal as could be," Sautina said, laughing. "Polish people are good."

They are also mindful of history, said Dominican Sr. Marjolein Bruinen, the secretary general of the Union of European Conferences of Religious Major Superiors, or UCESM. 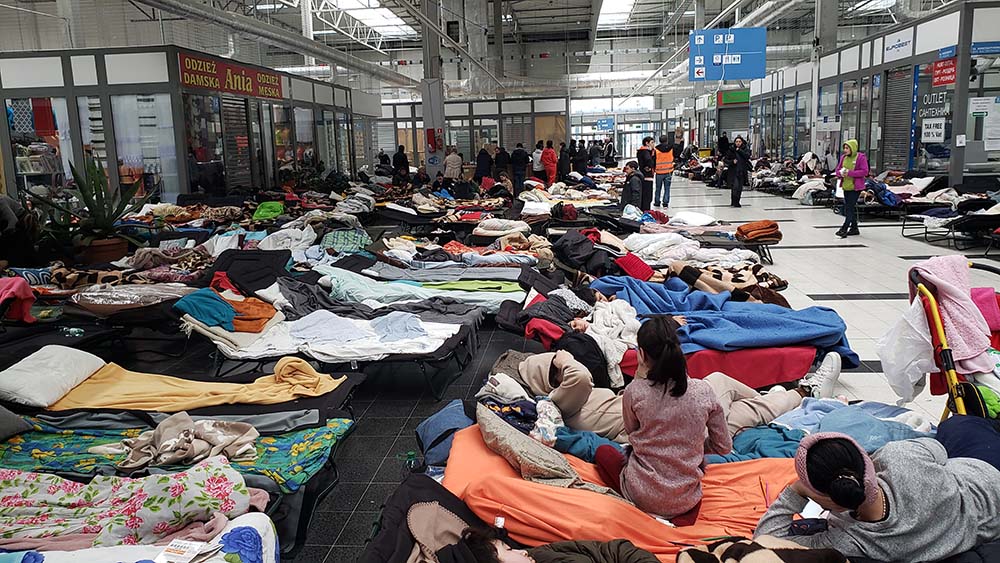 Refugees sleep on cots in open spaces at a refugee transit center at a shuttered shopping complex in Korczowa, Poland. (GSR photo/Chris Herlinger)

Ukrainians already constitute the largest non-Polish minority in Poland, so "many Ukrainians have relatives in Poland, whom they now call on, in the belief that they can soon return home or what is left of it," Bruinen said in an email.

There are also the present geopolitical realities. "Countries west of Russia are 'solidarizing' with each other against [Russian President Vladimir] Putin out of fear that it will soon be their turn," she said.

Finally, religious ties link the two countries. While Poles are Roman Catholic, and most Ukrainians are Orthodox Christians, there is a "significant minority of Ukrainian Catholics who worship with a Byzantine liturgy similar to that of the Orthodox but are loyal to the pope," an Associated Press story noted about religion's role in the Russian-Ukrainian conflict.

Given that, Christianity "unites the people of Poland and Ukraine," Bruinen said.

Relations between Poles and Ukrainians, though, have not been free of some tensions.

Here are some ways you can help those in Ukraine:

Memories of World War II are still evoked in both countries, with both nations claiming victimhood in an ongoing debate about the massacres in the border regions of Volhynia and Eastern Galicia in what is now Ukraine. The Polish government has officially called the 1943-45 events genocide.

And Poland's recent history with immigrants has been fraught. In 2016, thousands of Poles protested the decision to take in refugees from predominantly Muslim nations in Africa and the Middle East.

Yet Polish citizens took to the streets in 2021 to protest what they said was cruel treatment of migrants by Polish authorities at the border of Poland and Belarus and said the country should welcome immigrants.

In the present crisis, Poland is clearly doing the right thing, said Sr. Dolores Dorota Zok, the provincial leader of the Mission Congregation Servants of the Holy Spirit in Poland and president of the Conference of Major Superiors of Religious Orders in Poland.

Some of that has much to do with historical memory — with Poles remembering what it is like to experience poverty, hardship and what it means "to be alone and in a new country," Zok said.

"We like people, we like helping," she said of her fellow Poles. "I think we are not afraid of people from Russia. We are good to different kinds of people."

Two Ukrainian women who met Sr. Evphrosynia Senyk at the Ukrainian church in Krakow — Ludmyla Opanasuk, 45, and her sister-in-law, also named Ludmyla but who did not want her family name being used — said they were relieved to be in the city, which is blessedly quiet after the bombings and chaos they had experienced in and around the Ukrainian capital of Kyiv.

They were accompanied by Opanasuk's 13-year-old son, and are staying in Krakow with a Polish American couple who volunteered to take them in. Through the couple, the women and the boy arrived at the church, bound by trauma and seeking spiritual solace.

Taking a rest after days of arduous travel by both bus and train, the women were relieved to be in a safe space. "We are overwhelmed," Opanasuk said, "by the support of the Polish people."