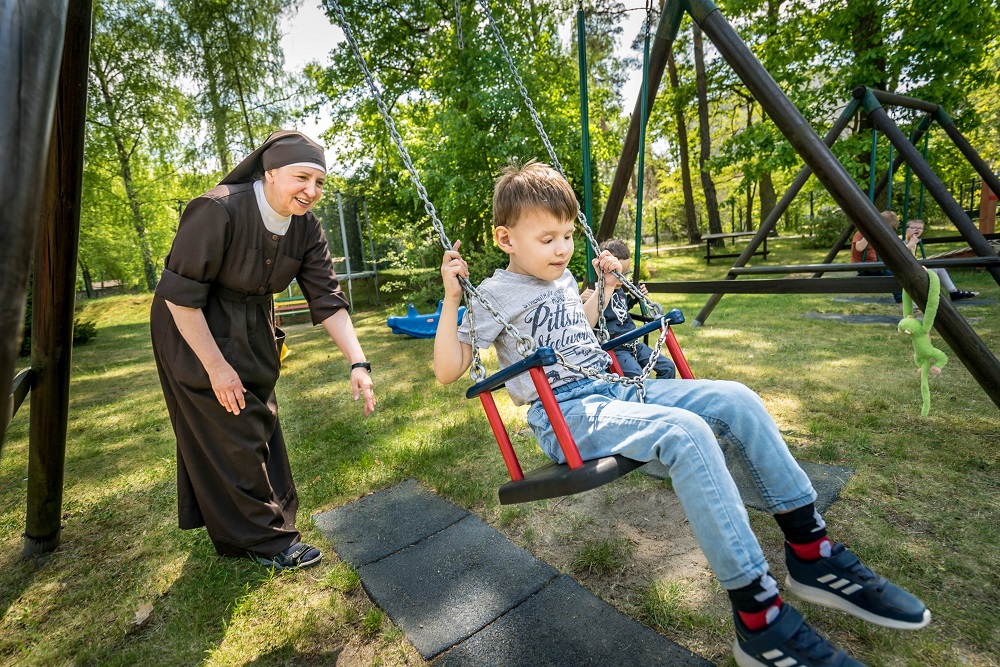 Sister Alicja of the Franciscan Sisters Servants of the Cross pushes Ukrainian refugee Jan, 6, at the monastery where they help blind children in Laski, Poland, on May 20. (CNS/Lisa Johnston)

In February and March, Warsaw train stations were overflowing with women and children, refugees from the war in Ukraine.

It was as packed as it would be for a "futbol match" said Olga Sulkowski, a 36-year-old mother of three and emergency response coordinator with Caritas in Poland.

"It broke my heart," she said, recalling that the women and children were the same age as she and her own children.

Sulkowski and other Polish families have opened their homes or assisted in some way the estimated 3.6 million Ukrainians who fled the war in their homeland. While about 1.5 million Ukrainians have returned home, large numbers remained in Poland and nearby countries as the war reached the 100-day mark June 4.

Her husband, Mariusz Sulkowski, on the faculty at Cardinal Stefan Wyszynski University, said the couple prayed about what they could do to help and agreed they would open their home in Otwock, on the outskirts of Warsaw, to a family in need.

"We live comfortably in our home," he said, explaining that they are helping in any way they can until the conflict is resolved.

The population of Poland's capital city has risen by more than 17% since March. Refugees are not seen lingering on the streets because they have found assistance and jobs locally through the generosity of Poles.

It tore 46-year-old Svetlana Starovytska's heart to leave Kyiv because her husband and 21-year-old son were obliged to stay in the city and fight. They stay connected via cellphone. 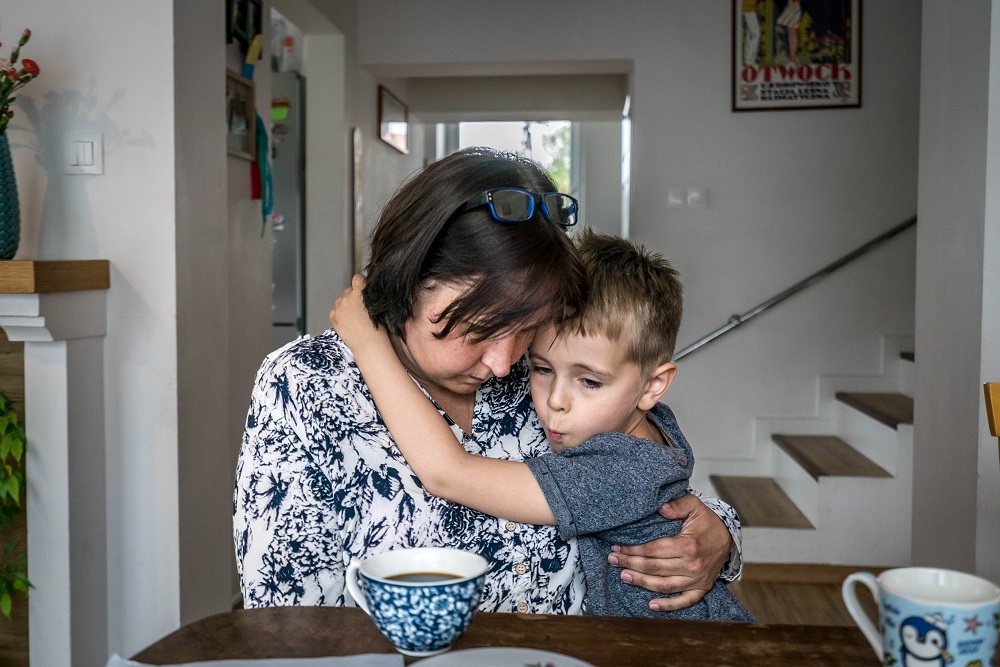 Ukrainian refugee Svetlana Starovytska comforts her son, Stanislav, 5, at the home of Olga and Mariusz Sulkowski in Otwock, Poland, on May 21. (CNS/Lisa Johnston)

Starovytska's brother took her and her children, Yaroslav, 12, Anastasiya, 9, and Stanislav, 5, to the train station. While there, a driver came by and offered a free ride to a border crossing at Medyka, Poland.

Hesitant but thankful, the family climbed into the small car and made their way west. Starovytska described the trip as confusing because Ukrainians had taken down road signs in an effort to thwart navigation for Russian soldiers.

The family crossed the border in the middle of the night, making it to a refugee reception center at the Torwar arena in Warsaw. After checking in with authorities, the exhausted family collapsed in a heap only to be awakened 15 minutes later by Mariusz Sulkowski's smiling face.

"It was strange from the beginning, it is still strange, but it was very comfortable to have a safe place for the children," Starovytska said of the three months her family has lived with the Sulkowskis.

The Sulkowski home is full of the endless movement of play between the six children living within its walls. Communication happens in four different languages simultaneously.

"We start a sentence in Ukrainian, add some Polish and Russian and end with English," Olga Sulkowski said, laughing and explaining how the war has made them a new kind of family for life.

In Zytomierz, Ukraine, refugees have sought a different path to safety.

As the bombs fell in Ukraine's capital of Kyiv soon after Russia's invasion, three Franciscan Sisters Servants of the Cross ran to their chapel to retrieve the Eucharist before hunkering down for safety in the lowest level of their convent.

One of the nuns, Sister Karolina, described how even at night, the sisters slept in their habits, satchels of essentials by their side so could flee at a moment's notice if necessary. They kept company with the Eucharist, praying for a resolution to the war.

In late February, as rockets fell in Zytomierz in northwest Ukraine, Sister Karolina said she and the other sisters called the families of the blind students the sisters teach at their day care center and told them not to come to school. The situation on the ground was changing rapidly and the dangers of war were unknown.

When it was safe, however, the sisters left their convent and care center, where since 2003, they have taught blind children to learn the basic activities of everyday life. The sisters have two missions in Ukraine. One is in Stary Skalat, where they run a summer camp for kids. The other, in Zytomierz, is a house known as Our Lady of the Rosary, where they care for blind children during the week.

The sisters were drawn to confirm the safety of the families regularly and provided them with food and humanitarian aid donated by the local community and Caritas-Spes Ukraine. Eventually, the situation became too dangerous for the families to stay in their homes. 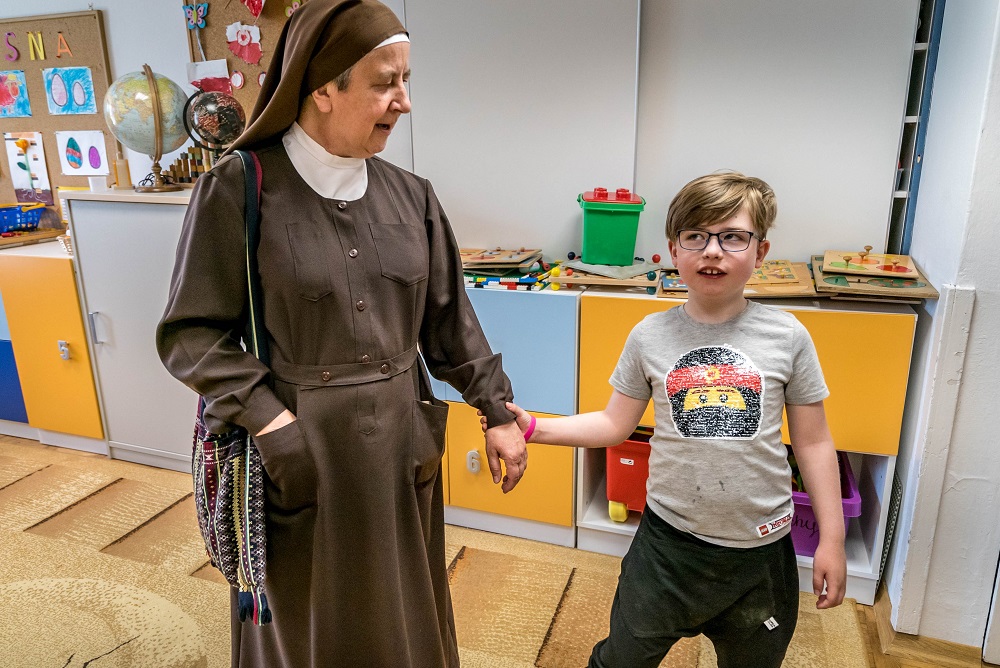 Sister Angelica of the Franciscan Sisters Servants of the Cross talked with a visually impaired refugee student from Ukraine at their monastery in Laski, Poland, on May 20. (CNS/Lisa Johnston)

Coordinating with their motherhouse in Laski, near Warsaw, the sisters helped desperate mothers trying to protect their children and provided an escape plan. The mothers left husbands and older sons behind to fight the war, fleeing with their children, carrying only a backpack of supplies. They were given shelter within the sisters' school and convent on the outskirts of Zytomierz until they could safely travel to the sisters' motherhouse.

Hidden on the edge of the primeval Kampinos Forest, the motherhouse is an oasis of peace. Children laughed as they played under a canopy of tall pines with blooming lilacs and wild flowers nearby.

Spring has brought certain warmth in contrast to the bleak winter the refugees spent under siege. Among the simple dormitory buildings and classrooms are a vaulted, folk-like chapel with a rustic interior constructed of unpeeled pine tree logs. The Angelic Mother of God Chapel is the center of prayer for the monastic Franciscan order. 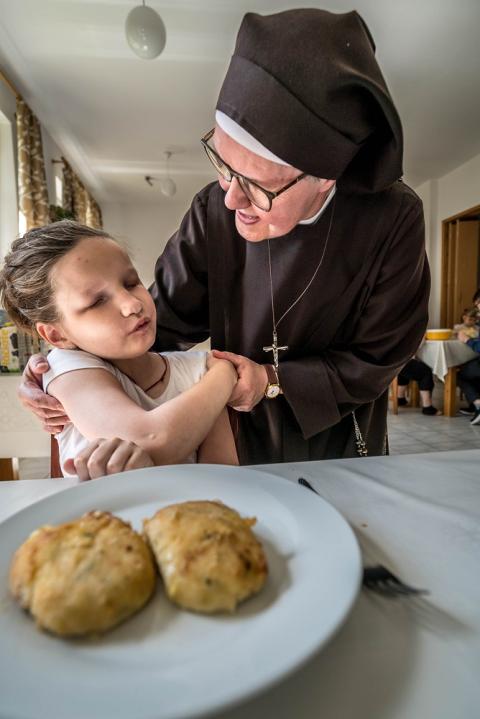 Sister Fabiana of the Franciscan Sisters Servants of the Cross hugs 10-year-old Katia, a blind refugee from Kyiv, Ukraine, on May 20. (CNS/Lisa Johnston)

The congregation was founded after World War I by Servant of God Mother Elizabeth Róza Czacka. Born to a noble family in Ukraine, she lost her sight at age 22 after a horse-riding accident. Rather than remain lost in her own darkness of sight, young Elizabeth traveled throughout Europe studying methods of helping those without sight so they integrate into society instead of living on its fringes.

Her order's mission is to serve the physically blind as well as the spiritually blind. Ukrainian refugees have found safety and support from the order.

Newly arrived blind children from Kyiv are not as adventurous as those who have been in residence for years. Psychologically, they have been affected by the war, and their anxiety shows. One of the women religious, Sister Alicja, said the children are "weary of voices they do not recognize" and are easily frightened. The Franciscans comfort the kids with love and kindness.

It is at the order's retreat house, which has been used as a hospital during both world wars, that a community of 63 mothers and children live, work and have the opportunity to pray with the nuns.

Tanya, who asked that only her first name be used, has brought her granddaughter, Katia, to safety at the retreat house. They fled from a "bad situation" in Kyiv, but Katia is thriving in her new home, Tanya said, and hugs one nun, Sister Fabian, every time she hears her voice.

Sister Fabian has difficulty imagining what human efforts will end the war. "Only God's help will bring healing," she said.