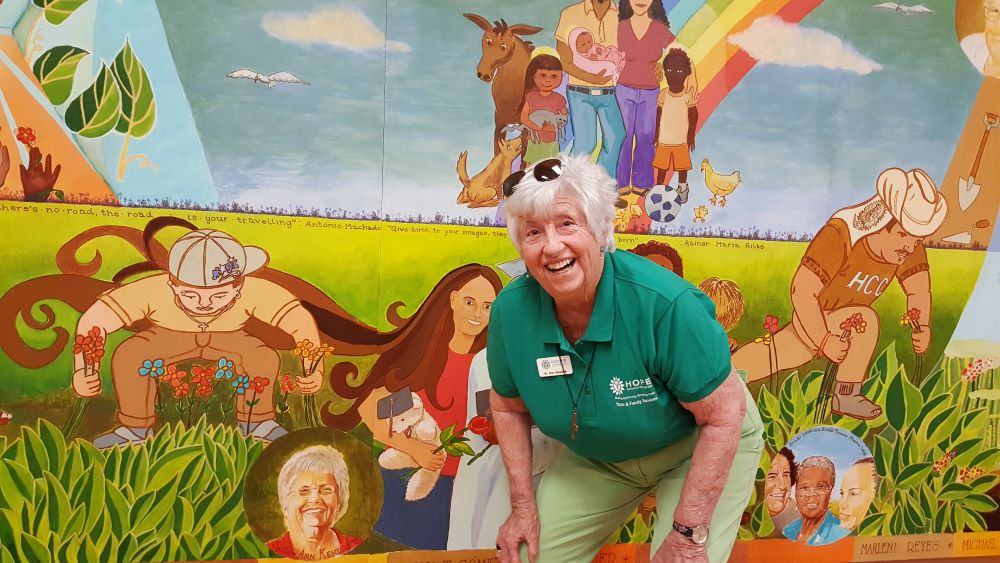 Sr. Ann Kendrick poses with a mural inside the Hope CommUnity Center in Apopka, Florida, that depicts the Rev. Martin Luther King Jr., other Sisters of Notre Dame de Namur who arrived with Kendrick in the 1970s to serve the community, farmworkers and others. (GSR photo/Gail DeGeorge)

Yet that's not what founder Sr. Ann Kendrick sees as the heart of Hope CommUnity Center, which grew out of the Office for Farmworker Ministry at the Diocese of Orlando and became its own nonprofit three years ago.

The true mission of Hope CommUnity Center is "advocacy — organizing in the community for social change," said Kendrick, a Sister of Notre Dame de Namur. "Hope engages in direct action campaigns and creates alternatives. Our main goal is social change, creating the beloved community with deep connections among people who are empowered to work for social justice by fighting against oppression and creating the alternatives."

Kendrick has been doing this work since she arrived with three other sisters in 1971 to what was then a small farming community in central Florida. Bishop William Borders of the Orlando Diocese had put out a call for Catholic sisters to come to minister to the mostly migrant workers and laborers in the area.

Kendrick, who had been teaching Spanish in high school and colleges in Northeastern states and loved the Spanish language and culture, had never planned on going to Florida: "It was hot, flat and way out of my comfort zone of the Northeast."

Still, she was intrigued by the prospect of putting into action what she and other sisters had been studying through documents from the Second Vatican Council, liberation theology and Gustavo Gutiérrez, Paulo Freire and others. She and other sisters were supporting the United Farm Workers of America and encouraging students to boycott grapes and lettuce. Going to central Florida to minister with migrant workers would make "this involvement in social change more real," she said.

"I decided I'd come for a year or two, help the team get started. Arrogance and pride are some of my character defects," she said, laughing. "That played into my heroic self-importance: 'I'm going to change the world.' "

Fifty years later, Kendrick still lives in Apopka. Among her many projects over the years, she cites four major initiatives that have evolved to bring positive changes to the area — Community Health Centers, Homes in Partnership, Self-Help Credit Union and the statewide Farmworker Association of Florida — plus more than a dozen programs through the Hope CommUnity Center that serve the population of what is now the second-largest city in Orange County, Florida, after Orlando. 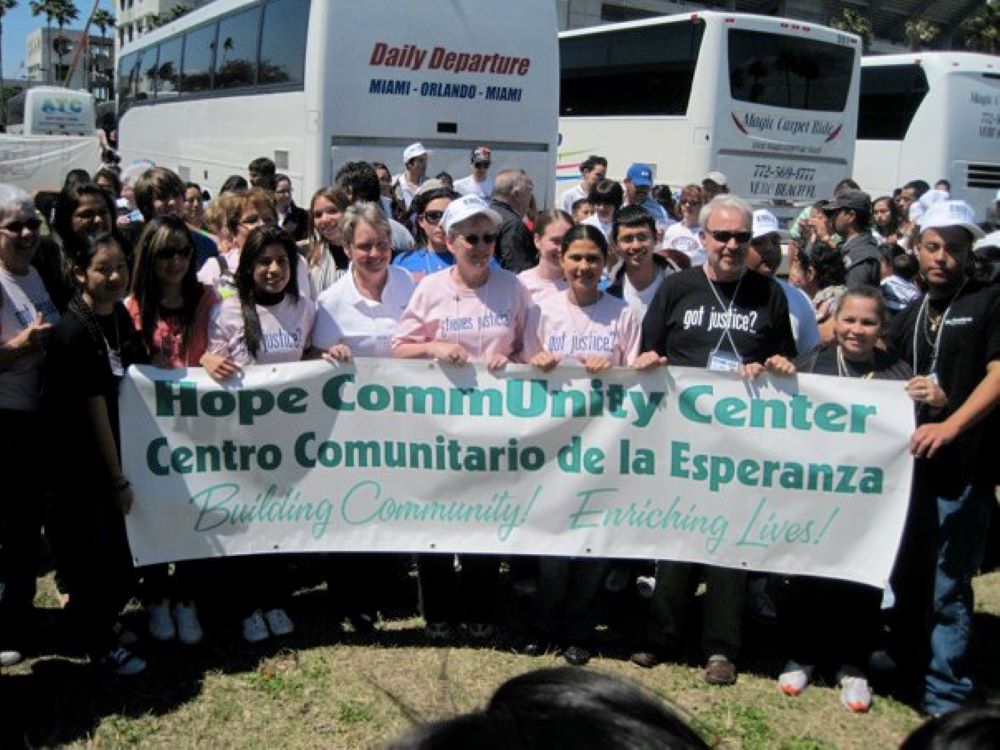 Moreover, many participants in the Hope CommUnity Center's service-learning programs, including the Notre Dame Mission Volunteers-AmeriCorps program, often do additional service stints and even take staff positions with other local nonprofits and schools.

Earlier this year, the Orlando Magic basketball team honored Kendrick as a "Social Justice Game Changer" because of her longtime advocacy for Florida's farmworkers. Kendrick took the honor in stride.

"I have a big personality and a mouth and I'm a soundbite for the media, but I never want that to take away from the leadership of the community," she said. "It's the people who inspire and keep us going, who suffer and are resilient, who continue to believe life is worth living and are noble, generous people who want to help."

GSR: What was central Florida like when you arrived in 1971, and how did you begin ministering in the local community?

Kendrick: It was a very segregated and racist reality. We knew we needed to live in a place that identified us with the community we were called to serve. People of color did not feel comfortable in white neighborhoods. In fact, it was dangerous for them.

So we moved into the Black community in south Apopka and lived there for 25 years, and we got to know people. That led to some concrete projects: the development of a health center; a clinic that now has 75,000 patients and 12 or 14 different freestanding locations, including dentistry, mental health, pediatrics, OB-GYN. All of that started with conversation in the community.

None of you were nurses. Can you tell us more about how the health clinic got started?

We were the only white people who lived south of the railroad tracks [in Apopka]. There was a guy, Henry Louis Kellom, who lived near us and was curious about who these white ladies were. He was back from Vietnam, going to school on the GI Bill and working in a juice plant at night. He was a leader in the community, and he introduced us to people. They invited us to a meeting about the lack of health care for people of color and for poor people in general.

There was an opportunity to compete for some federal money to open a health center for farmworkers. The health department didn't want to apply for it that year because they were going to be required to have local people from the community giving input into the value of their work. The conversation turned as to whether we as the sisters could get the community input needed and go for the grant.

One of us stood up and said, "We are four white sisters who just arrived in town. We can't do that. We don't know how to do that."

Our dear neighbor Henry stood up and said, "Four white sisters and one Black brother."

With that, everybody in the room stepped in and committed to participate in the organizing group. That changed everything: "If you're in, we're in. We're going to do this together."

We have the "nun gift." We know people who have resources. We found someone who had written a grant, so we got ideas from that. We put together a board of prestigious and community people, and we got money to hire a doctor, a nurse and third person as an administrator. We got the diocese to pony up for trailers — we had a double-wide that was the clinic and a single-wide that was the office — and the Maitland Presbyterian Church paid for the land.

It was called the West Orange Farmworker Health Association, and it's now Community Health Centers. It changed its name because it didn't just serve migrant workers. They now have about 500 employees.

Why are the service-learning programs so important to Hope CommUnity Center?

Immersion in the community, in the family life, the work and the culture of the immigrant and farm-working people creates human bonds that teach, inform and change lives. Our country is so divided by class and race that people have no idea of realities beyond their own limited experience.

Students come from colleges, universities and a few high schools across the country to stay with immigrant families and work in the fields and horticultural operations, getting to know the reality of the people, the root causes of their migration and how they live in the shadows because of their immigration status and lack of protection. Workers and their families face systemic racism and exploitation.

Farm work is hard, back-breaking work. Farmworkers are essential workers but often do not get the respect they deserve. In the afternoons, we unpack the students' experience and teach as community members tell their story. It is powerful. Lives and attitudes change. People from very different worlds come together and become family. We learn by serving, and we better understand our service by engaging directly with the community. Powerful, sacred moments are part of the total experience. We stay in touch, and the students become advocates for change. 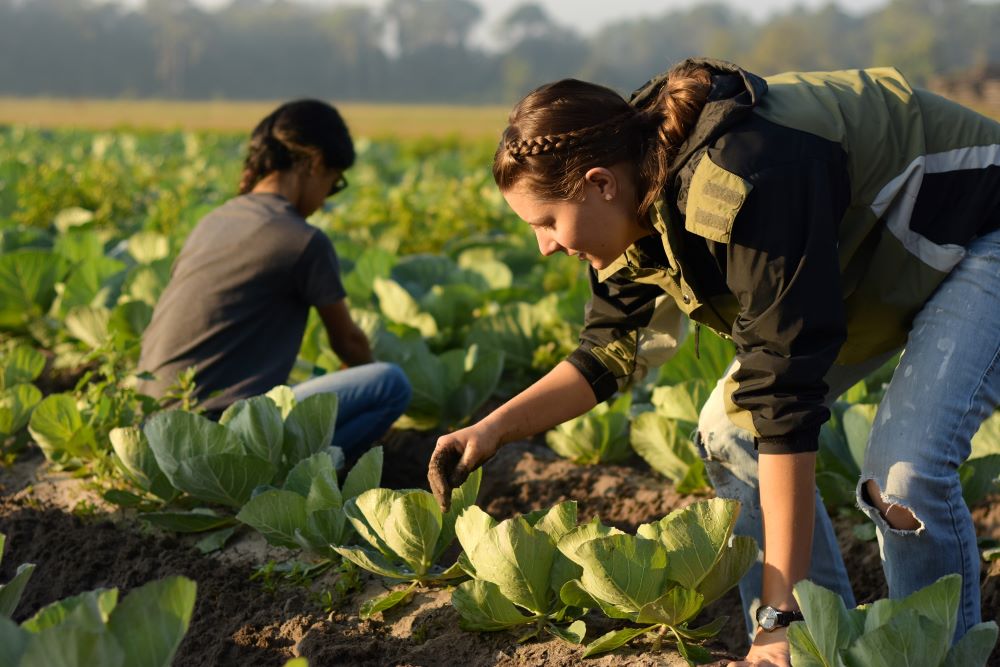 You initially didn't intend to remain in central Florida. Why did you stay?

My commitment was that every year, I take a look at myself and what the year had been and what we were looking forward to and ask, "Do I still have the energy for it, do I still have the ideas and the desire to be part of the struggle?"

It's hard. I had the arrogance of youth, thinking we're going to really clean up this mess, that in a few years we're going to get collective bargaining agreements for all the farmworkers and the world is going to change and racism is going to go away and poverty is going to be a thing of the past. It was my privilege of whiteness, imagining the power to be able to change all those things with just your will and your passion.

But I stayed because I love the people and am humbled by their generosity, simplicity and courage. I am evangelized by them every day. They have taught me what resilience and faith really mean. I live in awe that I have been blessed to be able to do this work for almost 50 years. Every day is a new one, a new opportunity, a learning moment, a sense of love and goodness.